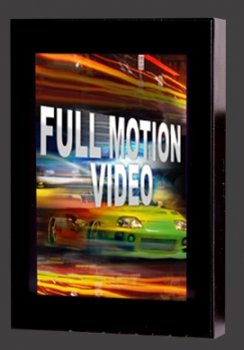 What’s in a name? I like it when a device is just named for what it is: I’m talking about the Video Name Tag. Simply put it’s basically a video playing business card which you can wear on your shirt. Nothing attracts more attention than moving images particularly if you’re wearing it in a busy crowd! So if you’re not too self-conscious and you want to draw some attention to yourself or your business let’s switch it on and see what kind of response it generates.…

Let’s talk about the physical device first. It is of course quite a bit heavier than a business card and actually also a bit smaller, particularly if you consider the viewable area. It’s a very sturdy unit that will stand up to a lot of use and abuse so it’s not very light weight. You then fasten it onto your shirt with a strong magnet but depending on the shirt you’re wearing it might not hang so very well, pulling the material down. Fortunately the VNT can also be hung with a lanyard around your neck, either horizontally (landscape) or vertically. One side of the VAT has the power on off switch, play next button, repeat and pause button as well as the mini USB port. Again, a very simple device but potentially powerful in becoming a conversation starter which is what you want when you are selling your business in a crowded environment.

So what are the specifications?

The main thing to know is that the screen is an OLED display, 320 X 240 over a 2.8 inch screen. Internal battery and memory of 2 GB are enough for a continual video display of between six and 10 hours. It’s probably longer than you can stand on a busy show day! The OLED screen is perfect for this sort of application as it has a wide viewing angle, is extremely clear to watch and consumes less power than a standard LED. It also helps that the screen is scratch resistant. 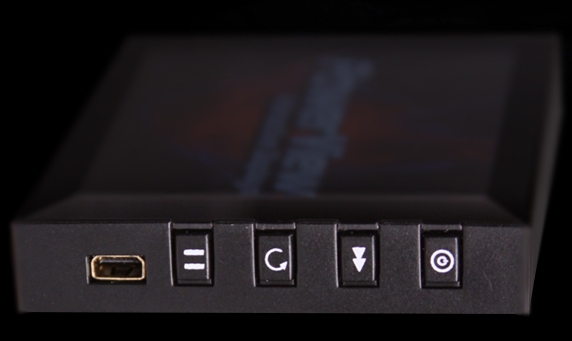 Putting It to the Test
The best opportunity to test its attention-getting powers is to wear it at a Business After Hours function of our local Chamber of Commerce. You must not be shy about this as you know that it might get all the attention in the room! I loaded it with a 15 second commercial of my business that was playing in an endless loop. There is no sound from the device but it is actually not wanted either as it is only meant to get the other person talking. Of course you can stop the commercial at any time or pause it at an appropriate slide or if it gets too distracting during a conversation you visit easily turn it off or turn it around if you have it hanging from the lanyard.

Well, I got some mixed reactions, mostly from people I knew: some folks tried to ignore it initially as we had good eye contact; others looked puzzled and queried “what’s that?”. And yet others found it intriguing but no stranger came up to me and wanted to know more about the device, or about me or my business. Perhaps we all are becoming too jaded about these things… I asked myself the question too: would I go up to a stranger and have a look at the display? Maybe not. So as a tool to help generate interest it works to some extent. I’ll do some more testing at next month’s meeting and let someone else show his portfolio on the device. If our findings then are much different we’ll amend our conclusion.

Conclusion
For close to 200 bucks you get a conversation starter that can be useful for other purposes as well. For instance, you could hang it behind the windscreen of your car when parked somewhere. (Hopefully no one will want to break into your car to steal it!). Or have it behind the door or window of your business. Is it on the pricey side? It’s a novelty item at the moment but if it is successful for you it could be worth its money. Other people can achieve more or less the same by hanging a mobile phone around their neck with a looping video or slideshow…

Any suggestions for a Mark II version? Yes, make it a lot thinner so that it doesn’t weigh down on your clothing. Also, have less of a bezel so that it can be the proper size of a business card.