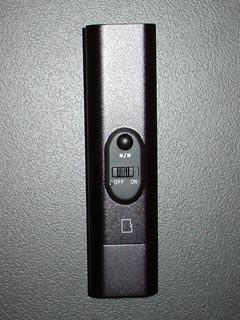 Digital cameras are everywhere. In any public space there is a good chance that someone next to you has a camera phone hidden away in their pocket, ready to record at a moment’s notice. Brando’s Mini Video Recorder is a bit different. While it too sits casually in a pocket, it is designed to record without anybody else knowing it is doing so.

Read on to find out more about this sneaky sucker..

Depending on how closely you look, Brando’s Mini Video Recorder looks a bit like a thick pen or highlighter. Despite being constructed from plastic, the recorder feels cold and metallic in the hand. At 97 x 25 x 12mm, the unit is small – but not minuscule – and is probably best described as convenient, in size. Its weight of 25g however, is sufficiently tiny and its overall shape feels great in the hand. While the unit is made to record video surreptitiously, a cursory inspection of the unit gives away this purpose quickly. Near the middle of the unit a simple ON/OFF switch is joined by a small /record/ toggle button (marked with a circle and a square). If this weren’t enough of a giveaway, beneath these controls is an image of a MicoSD card. Just under this image is a thin join line revealing the USB/microSD card slot protector cap.

The other side of the unit has two stickers – one with a large CE sticker letting everyone know we are dealing with something other than a highlighter. Above the sticker is the unit’s pen like clip. Towards the top of this clip is a 5mm circular opening which houses the concealed camera. When used from a pocket, the only part of the Mini Recorder that is visible is this clip – much the same way a pen or highlighter would look, when hung from a pocket.

On the very top of the clip (facing towards the sky) are two groups of small microphone holes, rounding out the Mini Video Recorder’s physical features. 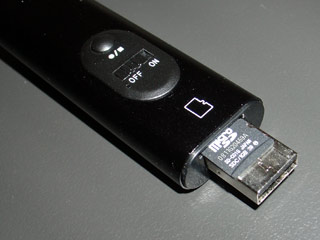 We gave the unit a few trial runs and found the audio and video to be good considering the size and stealthiness of the unit. Media Player Classic reported the resulting 3GP video as MPEG4 Video (352×288) with AAC audio (11025Hz mono at 176Kbps). We were also pleased to see that the recorded video was able to be played back via our trusty Samsung D-900 mobile phone. 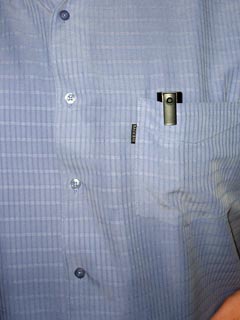 The recorded image – when recorded from the shirt pocket as pictured – is quite choppy, but when standing still or sitting, the video is fairly clear and easy to view and understand. Audio was acceptable also, with conversations being easily understood on playback.

Overall, the Mini Video Recorder has proven to be a fairly handy – if dubiously legal – recording device. 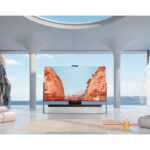