When you delete a file from your computer, is it really gone?  Information theft is getting more coverage in mainstream media in recent times, most of us would be aware of potential loss of personal information if you lose a mobile device such as a notebook, iPod or mobile phone.

Or imagine this scenario.  You have just bought a state of the art new computer. All your data has been copied over to the new machine and deleted from the old machine.  You then sell it to another party for a tidy sum and it is the end of that story.  Or is it?

Thoroughly erasing data beyond recovery on a hard disk is a time and resource consuming task.  It is one that is not performed as often as necessary given the number of stories you read in which deleted personal data has been retrieved from hard disks.  The WiebeTech Drive eRazer (Drive eRazer) is a dedicated piece of hardware that can clean a hard disk to US Department of Defence standard (non-classified data) without the need for a host machine.

First Impressions
The Drive eRazer is a nifty portable device that fits easily into the palm of my hand, just slightly shorter and thicker than my Nokia N80.  There was a momentary flashback to the days when I had to dedicate a perfectly good machine on a bench with the lid off and a line of hard disks waiting to get the “wiping treatment”.  Now all I need is a spare power point and I am ready to go!

Given the destructive capability of the Drive eRazer, it was prudent to consult the user manual before throwing the switch.  Although this particular setting did not affect my test drive, it is important to note that the jumper on target drive (3.5” variety) must be in the Master setting where applicable.

The Professional version I am using in my test drive has a two-position switch for "off" and "erase".  When the switch is in the erase position, the hard drive access LED lights up continuously.

The status LED performs four different functions.  According to the user manual, when the Drive eRazer is first activated, the status LED lights solid to indicate that the device is checking for and removing Host Protected Areas (HPA) and Device Configuration Overlays (DCO).  Following that process the Drive eRazer will erase a small section of the drive and calculate the time required to erase the rest of the drive, this can take several minutes.

The LED then will change from solid to blinking, which is actually the timer function.  The LED blinks in a rhythmic repeating pattern representing four digits.  Each digit is shown as a succession of 1 to 10 blinks representing 0 to 9.  The actual time calculated to erase the drive is the blink pattern per digit, minus 1.  For example, in my case the pattern [1 blink, 1 blink, 3 blinks, 8 blinks] represents [0, 0, 2, 7] – 27 minutes.  The pattern will repeat continuously, gradually counting down the time until the erase process is complete.

If Drive eRazer encounters any problems during the erasing process, the status LED will act as an error indicator. It will indicate what error occurred by repeating number of fast blinks (quicker than the countdown blinks).

Performance
WiebeTech estimates conservatively that the Drive eRazer processes 35 Mb/sec, equating to a 250 Gb drive being fully erased in under two hours.  The Drive eRazer took 29 minutes to erase my 20 Gb 2.5" drive in a single pass including the verification.  Not quite the sort of performance figures WiebeTech is quoting, but perfectly understandable when we take into account that this is an old and slow 2.5" notebook drive.

In comparison, using the free version of KillDisk took 64 minutes to complete the same task.

Useability
The Pro model provided by WiebeTech allows for either one pass or three passes via a jumper setting.

To change the mode requires changing a jumper setting.  The user manual provides instructions on how to do this but be sure to read it carefully.  The actual jumper setting itself is stuck in an awkward position and requires the use of a needle nose pliers to access it after unscrewing the cover plate. 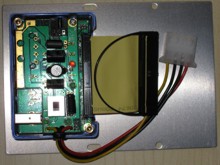 Result
It is all fine and good that the Drive eRazer indicated that it has completed wiping my hard disk but the proof of the pudding is in the eating.

When I replaced my newly wiped hard disk to its host notebook, the "Missing Operating System" error came up on screen during the boot sequence.  So far so good, at least the eRazer has done something.

Next I dived into my bag of tricks to see if I can recover anything from the hard disk.  Using a variety of utilities I attempted to scan for signs of data on the drive but I found not a single trace.

It appears that the Drive eRazer has thoroughly wiped my hard disk, every trick I threw at it came up blank as though it had just came from the factory.

Using the LED to report status makes it a little less intuitive to begin with, but something that one would need to get used to.  The manual is only five pages so it is not going to take hours to learn the functions of the device.

My only other complaint would be the location of the jumper setting.  Perhaps I have been spoilt from working on systems that do not require tools.  It is a minor gripe as I would generally set the preferred mode and let it be.

Conclusion
I find the Drive eRazer a top notch device that does exactly what it is designed to do without fuss.  It is faster than a software based solution and removes the dependency on a host computer.

It is simple enough to use with a little technical knowledge and about 5 minutes reading time.  I would highly recommend every IT department and every technician that services machines enforce a procedure that uses the Drive eRazer each time a hard drive is replaced or discarded.  Every user should also wipe their hard drives before letting it leave their hands but the need to remove a hard disk from the chassis may be beyond the average user.

Many thanks to WiebeTech for providing the Drive eRazer Pro (DRZR-2-VBND) for review.