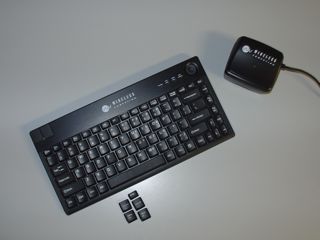 In my experience, keyboards are probably the most overlooked piece of essential computing equipment.  For years I have been putting together computers and for years I have purchased keyboards on the cheap.  After all, a good video card is more important than a decent set of keys to bash, isn’t it? 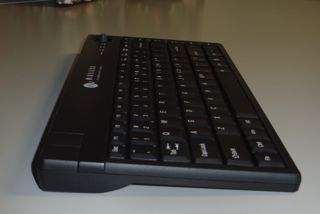 Built on a laptop style form factor, the RF-220 is about as compact as you could expect a useful keyboard to be.  At just under thirty-two centimetres it is fractionally wider than my BenQ 15.4" laptop’s keyboard and about three centimetres taller.   While not in Apple’s league, the keyboard is relatively thin at just over two centimetres at its thickest point.

At a glance, the keyboard looks and feels almost industrial in nature and is clearly aimed at professional presenters or boardroom executives.  The top right hand side of the keyboard features a small joystick for mouse control with two corresponding buttons on the left.  There are no media keys or shiny metal finishes to avoid scratching.  Here is a keyboard that despite its joystick and buttons, looks like an actual keyboard.  Novel.

Unlike most other keyboards, the RF-220 is equipped with four LEDs.  The regular number lock and caps lock indicators are supplemented by a useful low battery indicator as well as a LED to signify successfully sent key presses.  The latter LED flashes green to indicate a successfully transmitted key press, while red denotes failure.  At face value, this might not seem very useful until you consider the RF-220’s incredible thirty metre range.

Weighing under half a kilogram the keyboard is light, yet feels sturdy enough to throw around.  The mouse buttons are solid and the joystick too feels as if it will survive regular use. 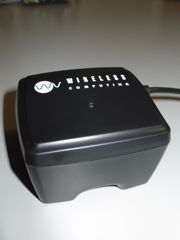 And then there’s the receiver.  The USB receiver which connects to the computer is possibly the chunkiest device of its type I have ever seen.  It has a LED light which flashes upon received key presses but is inescapably big.  Luckily the quoted range of 30 metres and its two metre long extension cord allows it to be safely hidden away from the world at large.

After installing the supplied AA batteries and connecting the keyboard’s chubby receiver, Windows XP automatically identified the keyboard – Once I paired the keyboard by pressing the button at the base of the receiver.

The actual keys can be best described as a compromise between a laptop keyboard and a regular desktop one.  While being compact, the keys feel solid under fingertip and communicate key presses well.  The most important keys remain full sized and are easily hit, while due to their reduced size, the arrow keys, alt and control keys take a little more getting used to.  The overall layout is good however, and apart from the placement of the function key at the extreme left of the keyboard, I found it very easy to master.

The mouse control was a different story.  For general mousing around, the joystick worked adequately but it’s not likely to replace a mouse for everyday use.  When considered as an occasional convenience, rather than a full mouse replacement, its performance was tolerable but never great.  This mouse would likely work well in a presentation environment where absolute precision is not required, ie:  basic point and click only. 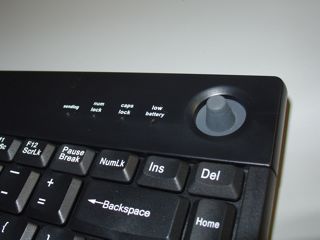 The joystick itself is rubberised and can be easily used with your right hand’s forefinger as a natural extension of the keyboard or by grasping the keyboard with both hands using your thumb to navigate.  This allows your other thumb to click the mouse buttons a bit like you would using an Xbox controller.

The keyboard’s quoted range is thirty metres and no matter where I placed my laptop and receiver, I managed to maintain an accurate stream of key presses.  The only way I could coax it to report unsuccessful key presses was by placing the keyboard at the opposite end of my house and have the keyboard faced away from the receiver.

Remembering that this is a keyboard, the overall the range should be adequate for even the most ridiculous home applications, as well as average sized conference rooms and theatre locales.

The keyboard has a number of more esoteric features which can be easily accessed using the function key.  One such feature is two way encrypted communication via 65,000+ digital addresses to avoid cross talk.  While this isn’t terribly important to me I can see how this could be beneficial in secure locations or educational settings where labs might contain numerous keyboards.  Also worth noting is that in testing there was no discernable difference in performance with encryption engaged or disengaged. 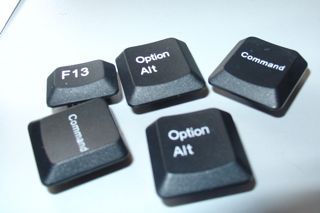 I also connected the keyboard up to my iMac and OSX recognised it as effortlessly as Windows XP did.  Apple users will also welcome the inclusion of five replacement keys to allow for seamless Apple Macintosh integration.  Once the keys are replaced, a simple set of key presses remaps the keyboard to Apple spec.

A feature I was not able to test but is definitely worth mentioning is that if you have more than one computer you wish to control, the keyboard can be used as a quasi-KVM switch.  Just attach a receiver to each computer and once paired, you need only use a simple function command to switch between which computer you wish to send key presses to.  So simple, yet so useful. 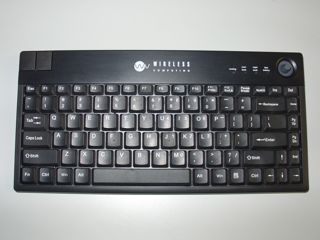 The RF-220 Wireless Keyboard is a very good compact replacement keyboard for general use and likely exceptional for presenters who need the long range.  Where I believe this keyboard is ideal however, is as a Home Theatre PC controller.  Don’t let its lack of fancy metallic finishes and media keys fool you, it does meets all the basic requirements:  Small, wireless and able to adequately input text and control a mouse pointer for relatively simple tasks.

Despite its cost I can’t help to think that this might just be the best Home Theatre PC keyboard.  Ever. 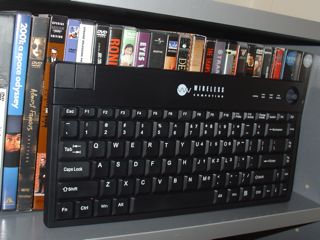 The RF-220 is available from Wireless Computing directly for $199US including receiver.  Additional receivers are available for purchase at $99US each.