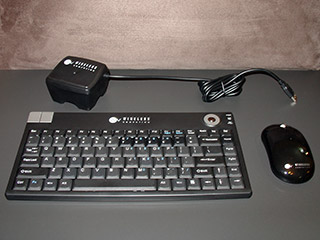 Late last year we reviewed he RF-220 keyboard from Wireless Computing and were suitably impressed.

For the past few months we have been using Wireless Computing’s brand new RF-222 keyboard along with their RF-170 wireless laser mouse in our daily routine.

Read on for our experiences with these new input devices.

Since our earlier review, we have taken a look at both a wired keyboard offering – The sexy DAS Keyboard and also the relatively inexpensive Brando MC Wireless Keyboard. Lets see how Wireless Computing’s new offering stacks up.

The original RF-220 blew us away with its incredible range and tiny form factor. While it was a great little keyboard, there were two things we felt could be improved: The keyboard’s general look and its less than ideal joystick mouse input device.

It seems Wireless Computing has been listening. 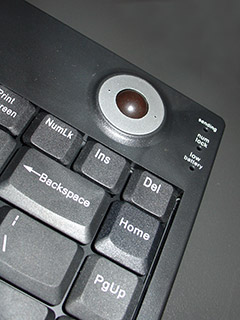 While the RF-222 shares its predecessor’s 31.1cm x 15.9cm x 2.5cm form factor, upon closer inspection, the new offering has some key differences. The first of which is the redesigned mouse input. On the right hand side of the keyboard, the cumbersome joystick input has been replaced with a back-lit track-pad. Yes. Back-lit.

When turned off, the track pad appears to be a pretty standard smooth black ball with a neat silver ring around it. Upon usage however, a dim red light emanates from the ball which turns out to be translucent. The ball is very sensitive but with a quick control panel adjustment is easy to manuver accurately. It is also worth noting that both the RF-222 keyboard and RF-170 mouse require no foreign driver discs and are plug and play – our tests rig runs Windows XP SP3. 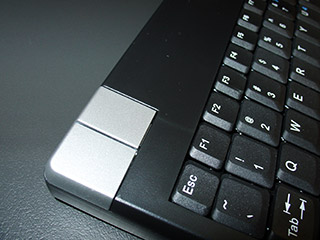 The two mouse buttons on the right hand side of the keyboard are slightly larger than the old RF-220’s. They are now silver and match the new track pad surround, giving the keyboard an understated, but well deserved touch of consumer appeal.

The Keys have also had some minor tweaks. The keys on the RF-222 have slightly more travel than the original keyboard adding a little more desktopness to its typing feel. The arrangement of keys has also changed, with all keys getting a slight size increase. While the key area on the keyboard appears to have increased only marginally, all keys feel bigger.

This trickery has been achieved by reducing the size of the tab, caps lock and shift keys, allowing other keys (arrows, home, PgUp, PgDn and End keys) to be promoted to full size. Coupled with a reduction in the beveled area of each individual key, the keys not only feel bigger, but the face of each key is bigger.

Other small changes include the repositioning of the sending, number lock and low battery lights, as well as the omission of the caps lock light. The keyboard also loses its replaceable Apple Macintosh key replacements – at least none were supplied in our package – and the function (Fn) key has been moved one place to the right from its previous position, to the bottom left edge of the keyboard.

As soon as we laid eyes on it, the RF-170 reminded us of an Apple mighty mouse, albeit one that had turned to the dark side. Sitting side by side, the two mice look like twins. 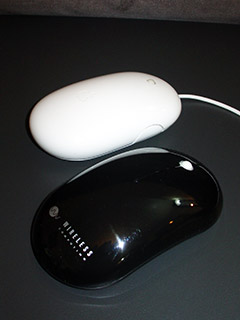 The RF-170 feels smooth in the hand but despite its appearance, has a different feel than its white illegitimate brother. For starters the rear curve of the RF-170 feels a little too steep – almost as if it is in your hand back to front. To this end, clicking the right mouse button is a little difficult, especially when compared with the ease with which a left click is accomplished. Unlike its white fruity rival, however, the RF-170 does not easily confuse mouse clicks.

Splitting the buttons is a small gap which is further dissected by a small white scroll ball. This ball feels great: The ball is much firmer than that of the mighty mouse but light enough to scroll effortlessly. Towards the middle of the mouse – atop the thin button divide – is a small LED that flashes green or red depending on whether the RF communication was successful or not. 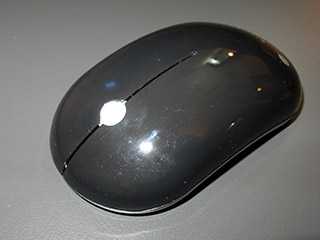 The RF-170 features a colourless laser tracking system and in our tests proved to be as accurate as any wireless mouse we have used – and generally less quirky than its Apple familiar. Apart from the ergonomics which we found a little odd, the RF-170 turned out to be a fairly decent mouse and is a good technological match for the RF-220 – aesthetically, however, it is much prettier; truth be told.

Both the RF-222 and the RF-170 use the same chunky transmitter which is what helps the keyboard in particular, achieve such a phenomenal range. In our distance tests, we found the keyboard to be reliable to about 30 metres which included a number of walls, including an external one. It is unchanged from the unit included in the RF-220 package we reviewed earlier.

The RF-170 mouse is rated at 15 metres and our testing agrees with this estimate, plus or minus a metre or so. 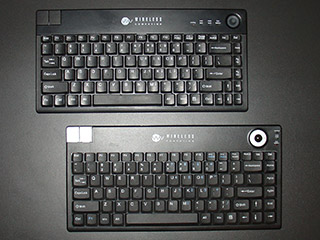 Wireless Computing has taken everything we liked about the RF-220, improved the mouse control and mildly tweaked the keyboard’s appearance.

Is this visual tweak enough to entice the “designer hardware” crowd: Probably not, but the keyboard’s new look will please those who require its unique functionality.

Yes. There are far cheaper keyboards on the market but none can claim the RF-222’s incredible long range and end to end encryption. And all in a very compact form factor.

Completing this package is the RF-170 mouse. The RF-170 is a competent mouse and looks great. While its ergonomics felt a little odd, we found the RF-170 generally handled itself better than Apple’s similar offering. As a standalone product, however, the mouse is priced a little high for our liking, which is reflected in its individual score.

Individually, the RF-222 keyboard is available for $199US as is the RF-170 mouse. Each unit comes with a single receiver.

The RF-392 mouse and keyboard bundle is $299US which also ncludes a single receiver unit.

For more information, or to purchase one of these products, please visit the Wireless Computing website.