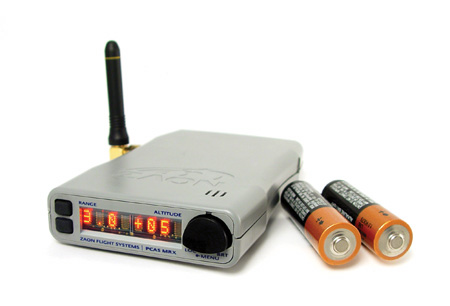 Greater Safety in the Skies
One of the greatest safety advances of the last few decades in aviation must be the Collision Avoidance Systems installed in commercial airliners. They enable pilots to see who else is flying in their airspace so that they can avoid running into one another. This safety option is now available to all aircraft, including private airplanes, and today we will be reviewing the smallest and most affordable of these portable units, the Zaon MRX Portable Collision Avoidance System. This is the fourth in a series of reviews we have conducted on SureCheck/Zaon products in the last couple of years.

Here are the links to our earlier write-ups and we would recommend reading these reviews as well since there is a lot of background material and schematics on how it all works that I did not repeat in this review. Zaon XRX, SureCheck VRX and SureCheck TS Micro.

The Zaon MRX Portable Collision Avoidance System has taken the place of the TS Micro and has a number of significant improvements. It is pleasing to see that Zaon has implemented most of the suggestions that I made in the earlier review, particularly as to reflectivity of the previously white unit which has now become a dull, light grey.

Rubber feet or Velcro options make sure that the unit doesn’t slipslide away on the glare shield. The MRX can now be directly powered from the ship which is a much better choice for longer flights, while retaining the battery option. By far the biggest improvement you’ll find in the display information.

Instead of just a series of different coloured LEDs to indicate the range of other aircraft intruding in your airspace, the MRX gives a very clear indication of both the range and the relative altitude and whether or not the other aircraft is climbing or descending in relation to you. The MRX can detect multiple aircraft at the same time but it only displays the most significant threat.

Because aircraft change positions all the time it is critical that the MRX knows how to prioritise.  It does this on the basis of the axiom that accidents only occur at your altitude, so relative altitude is the determining factor here.

It takes into account also whether your own aircraft is climbing or descending and, when the threat changes and another aircraft comes closer, you will see the word – NEW — for a couple of seconds followed by the new information.

Using the MRX
There are only a few buttons: power on/off, mute, and a five way directional pad. The mute button will kill the beeps for the traffic advisories and alerts.  You will still see the word ADVISORY which is accompanied by two beeps) or the word ALERT. An alert generates four beeps which means it’s head-swivelling time!
It depends very much on your range settings when these warnings are generated.  For instance if the range setting is 5.0 NM (the default) and the traffic is within 1 mile you will receive an Advisory at +/- 1000 ft and an Alert at +/- 700 ft.

There is an excellent manual that comes with the MRX that explains its capabilities as well as limitations.  As mentioned before in the other reviews, these limitations have nothing to do with the product itself, but relate to the fact that not all aircraft are transponder equipped and, in a passive system like the MRX, it will only detect other aircraft when in range of an active system or ground-based radar.  This is hardly a limitation as most of the continental United States and Europe are virtually a hundred percent covered either way.  It is a different story in countries with low density air traffic and fewer radar stations.  Of course, here the threats of conflicting traffic are fewer too…

We tested the MRX on a few flights in the Perth, Western Australia, airspace. Jandakot is Australia’s busiest GA airport and only a few miles from Perth International.
Air Traffic Control and Towers will only give you the barest minimum of info on conflicting traffic so the timely alerts from the MRX enable you to be ahead of the game all the time.

For comparison we also had the Zaon XRX along on the co-pilot’s side. This, much taller, unit also displays directional information. The Alerts and Advisories were very consistent on both displays. Not surprisingly perhaps is that the very bright (but adjustable) LED graphic modules on the MRX are easier to read and interpret than the LCD screen of the XRX…Can’t wait for the colour version of the XRX!

With all these improvements over the previous model do we now have a perfect product in the MRX?  Well, it is significantly better with a great and informative display, better power options and a stable, non-reflective unit, sitting unobtrusively in your line of sight on the glare shield.

Sure, we would like the addition of directional information like we have on the XRX, and with the advance of technology we might eventually see that on a smaller unit like the MRX.  For now, the MRX is the ultimate in really portable traffic detection systems for pilots on a budget.  These products are a pilot’s best friend in busy airspace and it truly is amazing how it picks up traffic before you can possibly detect it yourself.

Priced at USD549 it is a no-brainer to order one right now and make flying for you and your passengers much safer.

For more info on the MRX and Zaon’s other products and accessories have a look at www.Zaon.aero