Without a doubt, the Zivio Boom headset is one of the best looking bluetooth headsets available in the market.  It garnered a lot of attention and envious looks when the unit arrived, from designers to geeks alike.  DigitalReviews got to take this sexy piece of hardware out for a test drive, courtesy of our good friends at Joby.

Stylish.  Sexy.  Beautiful.  Without a doubt the Zivio is eye catching like nobody’s business.  In fact the presentation of the product is top notch, from the silver lettering on a jet black background, the window that allows for the unit itself to be displayed, the larger back window that shows off the boom, to the open flap which teases you with the various customisable components.  There is no doubt that careful thought and some very talented designers have been employed in the creation of the Zivio Boom. 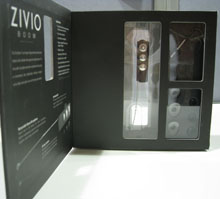 It is almost a shame to pull the packaging apart to extract the Zivio.  Along with the base unit, the Zivio comes with 2 different types of in-ear attachments, and each type comes in 3 sizes.  Additionally an uniquely designed ear loop is separately packaged.  A brief instruction manual is enclosed, presented in a black paper pouch to match the black presentation theme.

The charging cube is a compact 46x43x29 mm (LxWxD), marginally smaller than an iPhone charger.  What sets the charger apart is that the charging pins rotate to fold inside the cube (US adapter) and it features not one, but two USB ports with separate LED indicators.  It is brilliant move as my powerboards are constantly clustered with various chargers that would only power or charge a single device when so many can be charged by USB.

As our readers would appreciate, looks is one thing but just how does the Zivio Boom perform?  One thing I have to do as a reviewer is to learn how each particular headset works, in particular the visual or audio clues to indicate what state the device is in.

A design feature that I look out for is a dedicated on/off switch, my usage habits generally means when I want the headset turned off, I want it off right away and not for me to sit there and listen to the trill or watch blinking lights thanks to a single multi function button.  The Zivio Boom has a compromise solution in my view.  It has a dual function on/off button located at the end of the headset next to the micro-USB charging port, holding the button down will power the unit on or off depending on the current state, and the Joby button (the only button with LEDs showing) will light up either green for 2 seconds (on) or red for 1 second (off).  Tapping on it once will show the level of charge left in the unit via the LEDs on the Joby button, ranging from blue (battery full) to red (battery empty) and 5 different shades in between.

On the main face of the unit there are three buttons, the Joby switch, volume up and volume down.  These buttons singularly, or in combination, serves different functions, along with either tapping or pressing it.  It makes for a reasonably long list of functions that the Zivio Boom can handle and I hope you have a good memory.  On a brighter side, Zivio provides a handy pocket guide for reference but seriously, who would be reading that when you are juggling calls?

I found for the first time, a Bluetooth headset that actually sits in my ear comfortably and without requiring an ear loop, something I never really thought was possible.  The mushroom earpiece was a great fit for me, largely sealing out extraneous noises yet comfortable.  The miniscule 13g weight of the Zivio barely registers on my ear.  I imagine for some ladies (and gents), their ear adornments would be more noticeable than the Zivio.

If necessary though, the Zivio Boom comes with a magnetic ear loop which despite my initial misgivings, actually works reasonably well.  The magnet is just about the right strength and can be attached to any part of the headset casing.  This means you can have it attached as far forward or back on the headset as it suits.  The depth of the pin on the magnetic base can also be adjusted giving great control over fit.  I find that it is easiest to put the ear piece in first, then swivel the ear loop over my ear.

When the boom is fully extended, the microphone is just near my mouth where it should be.  The telescopic boom is made of the shape memory alloy nickel titanium, marketed as Nitinol.  It means you can bend the boom closer to your lips and customise the fit, and the metal will retain the curvature even after it has been retracted.  Further adjustments can be made as the earpiece component on the Zivio is mounted on a ball socket but adjustment can only be done with the Zivio dismounted.

Upon using the Zivio Boom, one thing that is immediately noticeable is that incoming volume is definitely loud.  In fact, having the volume up over halfway on my iPhone makes it uncomfortably loud which is preferable to it being too soft.  There is very little distortion in the sound even when it was at the loudest volume.

As for the incoming voice, the mileage varied a little.  The sound was clear but not crystal clear.  There is the rare occasional static moment and an overall slight hollow effect no doubt from the noise cancellation algorithm.  Words spoken to me were perfectly understandable though under different conditions including next to a fan going at full speed trying to cope with the recent heat wave in Melbourne.

The Joby button is multi-function, where a tap, a press and double tap in various states performs different functions including answer, end call, reject call, transfer audio, last number redial, voice dial, initiate and terminate conference calls.  For a power user, you can pretty much control everything from your finger tip.  Let your fingers tap dance your way into various conversations!  You can also mute the microphone by pressing the + and – buttons simultaneously.

The Zivio Boom comes complete with:

A couple of issues as always, some more serious than others depending on how the Zivio Boom is used.

Firstly the telescopic boom looks and feels flimsy.  It has to be as it needs to be light weight and flexible.  That said and done, there is a decent amount of flex that it can take before it feels like it is ready to snap.

Secondly the boom can be a pain to extract if you do not have finger nails.  Fully retracted the microphone sits flush against the headset with about half of the very small circle sticking out.

Lastly, for something so stylish, the silver parts are fingerprint magnets!

Great care has been taken in the design and production of the Zivio Boom. The product is a beauty to behold, and for the most part, a pleasure to use. There is a suspicion in my mind that the Zivio Boom is pitched at the discerning female technology user market, who value function as much as aesthetics.  (The gorgeous model on their website did not sway my opinion.)

Amongst all the ladies that I showed the Zivio Boom to, none have failed to be impressed by the elegent design.  The attraction was not limited to just the ladies as it certainly garnered the attention of the fashion conscious gents who were wondering what the ladies were drooling over.  The admiration was almost universal.

The unit performed admirably under a variety of conditions although not the best I have seen.  It is certainly up there near the top of the pick.  There are some issues, none that are so dire as to ruin the product in my belief.

It is the attention to the little details which sets the Zivio Boom apart.  For the asking price, the kit comes with two different lengths of USB cables, two ear loop magnets amongst the various sized earbuds.  Each of these components can also be purchased separately.

The Zivio Boom is available here for USD$129.95 in black or marina blue.  You can even get it gift wrapped on dispatch.