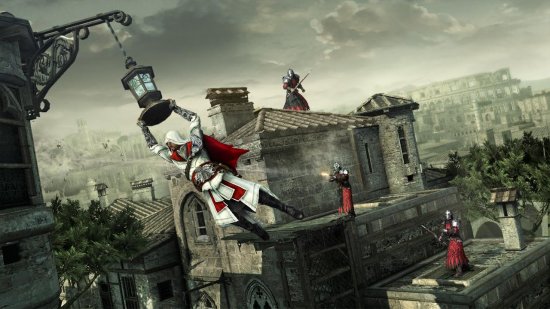 Assassin’s Creed: Brotherhood is the third in a series of games that mix renaissance Italy and the exploits of a secret group of assassins that penetrates all the way into modern society in 2012, but is it enough of a sequel to stand out of the shadow of its successful predecessor, Assassin’s Creed 2?

Assassin’s Creed: Brotherhood is a game where you play as Desmond Miles, a descendant of Ezio Auditore di Firenze living in the year 2012, and get to experience the life of his ancestor, Ezio, in turn-of-the-16th-century Rome. The premise is that there’s advanced technology, called the Animus, that lets you relive the memories of your ancestors via the experience that’s coded into your DNA. This means that a few parts of the game have you running around and climbing in modern day Monteriggioni as Desmond and advancing the “here and now” plot, while the bulk of the game puts you in the shoes of master assassin, Ezio around 1499-1505 in renaissance Rome. As Ezio, you have an arsenal of weapons and a guild of assassins at your disposal in the ultimate pursuit of the incestuous tyrant, Cesare Borgia. Given all of this, it’s both an action game and an adventure game, alternately blisteringly fast and strategically cerebral.

Oh, and it’s the first game in the series to add multiplayer, which I’ll get into later.

Anyway, I played through the entire single player campaign and spent several hours on multiplayer before drawing any conclusions on this one. Here’s what stood out to me.

+ The overall presentation of Assassin’s Creed: Brotherhood is crisp, polished, and stunningly well done. The menus, the loading screens, the artwork, the soundtrack, the box art; all of it is painstakingly laid out to be as professional as possible. When I watched the credits roll at the end of the game, I noticed a cast and crew as large as or larger than any big budget Hollywood movie and thought, “Wow. This is what you get when you assemble a theatrical crew and budget and tell them to make a video game.” Tons of people worked on Brotherhood and the result is a game presented with a phenomenal degree of polish and finesse. The baroque artwork, while not historically accurate for that period of time, is breathtaking. The soundtrack by Jasper Kyd is extremely well done and fits every aspect of the single and multiplayer experiences perfectly. Even without examining the game play, Assassin’s Creed: Brotherhood is extremely well assembled and a very impressive standard of production.

+ The game play, in every mode of play, is almost universally slicker than greased lightning. When free running around the playground that is Rome, you get unfettered access to every street, alley, ledge, window, and rooftop in sight and the game allows you to explore that environment with Jedi-ninja-cat agility. Exploration and combat are straightforward and uncomplicated without being so easy as to put the player on autopilot. Playing through Assassin’s Creed: Brotherhood, I felt just the right level of involvement where I was able to perform incredible feats that I could never do in real life, but where I still had to have a strong level of attention and skill to do so exactly the way I wanted to. Leaping from place to place, for instance, is thoughtless with some practice, but not so easy that it’s impossible to fail, creating a level of difficulty that is constantly engaging without ever becoming boringly simplistic or frustratingly difficult. Surprisingly enough, this carries through for the entire game. 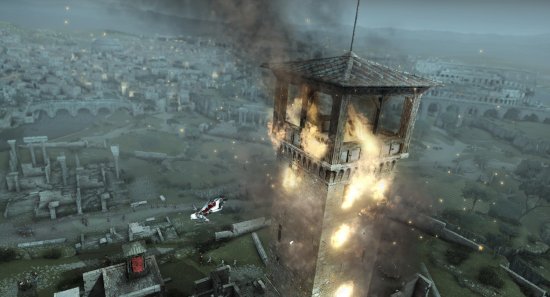 + The sandbox-like design concept for Assassin’s Creed: Brotherhood is part of what makes it stand out from its predecessors and easily one of my favorite parts of the game. Rome is laid out at your feet and you have completely free reign of where to go next. Interested in buying all of the blacksmiths that are available? Feel free to do that instead of following the storyline missions. Eager to rise up through the ranks of the thieves’, courtesans’, or mercenaries’ guild? Want to help Leonardo destroy all of the inventions that he was forced to create for the Borgia family? You can do any of these things and there is very little restriction on the order in which you need to do so. The functional map does expand as the story progresses, but there was never a point where I felt truly restricted by any sort of rigid, linear progression.

+ Assassin’s Creed: Brotherhood is a completionist’s dream. There is a mind-numbing degree of various stuff to be collected, including dozens upon dozens of blacksmiths, banks, tailors, tunnels, doctors, stables, and landmarks to be purchased and renovated, a hundred Borgia flags to be tracked down in obscure and hard to reach locations, around a dozen feathers hidden atop various high points in the world, and hundreds of pieces of treasure that reward you with both money and upgraded weaponry. On top of that, every mission can be both completed and fully synchronized, where full synchronization puts an often difficult stipulation on just how the mission has to be completed, such as without detection, without killing anyone, under a certain time limit, or by making an assassination with a specific weapon. Outside of all of that, there’s a training mode that offers several challenges that all can be completed at various medal levels, with the lowest medals being reasonably accessible and the highest being awarded only to the most die-hard players. For a game whose basic premise is simply assassinating the bad guys, Assassin’s Creed: Brotherhood manages to boast a huge arsenal of tasks and rewards.

+ The multiplayer in Assassin’s Creed: Brotherhood is the most innovative action multiplayer I’ve ever seen. Basically, you play as one of about a dozen different models, including an engineer, juggler, dancer, thief, and many others. Then, you’re plopped into a map populated with up to seven other players and dozens upon dozens of NPCs that all share the same model selection as you and the other players. You don’t know who’s a player, unless they’re on your team in one of the cooperative modes. There are three basic modes, including Wanted, Manhunt, and Alliance, and each is slightly different. Wanted is an every man for himself free-for-all, where each player is assigned a target that they have to find amongst a crowd of identical-looking targets, Manhunt is the same thing with two teams of four only it lasts for two rounds with each team getting one round to be the hunters and one round to be the hunted, and Alliance is similar except for being divided into four teams of two. Instead of just tracking kills, all modes award you points for each kill depending on how skilled the assassination was. If you and your target are both running around like maniacs, you only get 100 points for a kill, but sneaking up on your target and assassinating them incognito nets you 400 points. There are bonuses for being super stealthy, executing a variety of different types of kills, and just generally being a skilled assassin rather than a frantic madman. The end result is a multiplayer experience with more tension than a psychological thriller where a careful eye and a clever player will always come out ahead of a reckless assassin. It completely turns conventional action multiplayer on its head and I’ve loved every second of it. 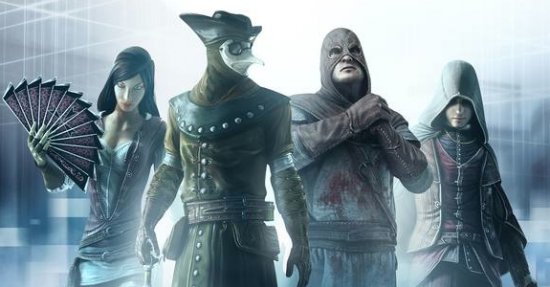 – The icons on the map in Assassin’s Creed: Brotherhood are extremely small and incredibly difficult to read. I’ve played this game on a standard definition television and a high definition television and the issue is omnipresent; the map is universally hard to read. Only with several hours of practice was I able to differentiate between a grey icon, indicating a business yet to be purchased, and a black icon that showed a business I already owned. Further, there’s no way to save custom map settings across play sessions, so I found myself clearing the cluttered map and repopulating it with only the icons I was interested in seeing every time I turned the game on. It was ultimately a minor nuisance, but with every other aspect of the game being so well designed and meticulously planned I wondered why the map had such glaring issues.

– The load times in Assassin’s Creed: Brotherhood can be fairly lengthy, especially in multiplayer. During the single player campaign, you can at least run around in a virtual grid environment while you’re waiting for the next zone or event to load, but it’s still a noticeable break in game play that happens reasonably often. You never have to load when traversing the city or countryside, but there’s always a load screen to begin, end, or transition during a mission or event. In multiplayer games, the load times can be up to a few minutes long as you have to wait for every player to load the map and settings. It isn’t game breaking, but it does get annoying.

– After doing so repeatedly, the collection imperatives in Assassin’s Creed: Brotherhood sometimes started to get obnoxious and repetitive. While I felt compelled to purchase all of the dozen or so blacksmiths to unlock new weapons or the numerous banks to increase my income capacity, I felt no such compulsion to gather up 100 flags even to unlock a cape with special abilities on it or to gather up feathers that were sometimes nigh-impossible to reach. With a city so gigantic, collection goals started to get a little bit excessive over time. 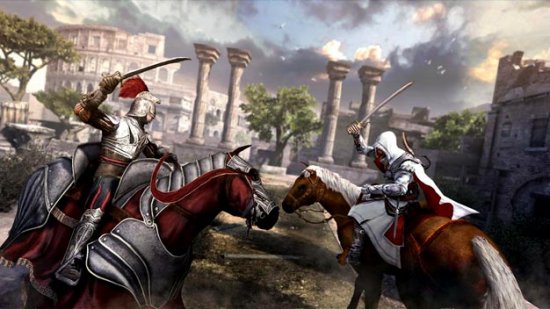 Assassin’s Creed: Brotherhood is an exceptional title, easily my favorite PS3 game of 2010, and a strong contender for Game of the Year in some gaming circles. After playing through the twenty or so hours of the single player campaign, clocking several hours into multiplayer, playing the Facebook game for a few weeks, and doing a great deal of the exploration and collection necessary to see all of Rome, I can say in good conscience that Assassin’s Creed: Brotherhood is deserving of all of the accolades it receives or received, including Action Game of the Year at the Spike Video Game Awards. If you’re looking for a pristinely produced action adventure game with a compelling single player experience and incredibly innovative, intense multiplayer element, look no further: Assassin’s Creed: Brotherhood is the game to get.

Assassin’s Creed: Brotherhood was provided to Digital Reviews by Ubisoft for review purposes and is currently available for the Playstation 3 and Xbox 360 platforms at an MSRP of $59.99 USD, though it is frequently available for $39.99 from common websites such as Amazon.com. I completed the single player campaign, half of the virtual training, almost all of the side quests, and numerous play sessions in multiplayer before writing this review.