The biggest game to hit stores this summer is without a doubt Blizzard’s latest creation and sequel to the 1998 original hit, Starcraft 2: Wings of Liberty. I got a chance to play through each of the facets of this behemoth of a game and this is what I have to say about it.

For the uninitiated, Starcraft 2 is a real-time strategy game based on a science fiction universe. That means that you have complete control over the logistical and tactical aspects of an army of futuristic humans (Terrans), super advanced aliens with incredible technology (Protoss), or brutal monsters the likes of which some of your nightmares have never seen (Zerg). At any given point in time, you might be controlling anywhere from one to one hundred units while managing one or more home bases, including resource gathering, construction, unit building, and technology/upgrade research. As the genre name implies, this all happens in real-time, as opposed to in a turn-based environment.

The core of the initial Starcraft 2 experience is in the single player campaign. In Wings of Liberty, this is only the Terran campaign, following the human hero Jim Raynor as he simultaneously attempts to lead a rebellion against tyrant dictator Arcturus Mengsk and redeem the once-lover-now-Zerg-queen Sarah Kerrigan. The storyline is fairly one-dimensional and the dialogue is very straightforward, but the presentation of each is phenomenal. The cinematic quality and voice acting are both evidence that Blizzard needs to make movies, not just video games, as there are big budget Hollywood pictures that could certainly learn a thing or two from Blizzard’s presentation of the Starcraft 2 epic.

Speaking of presentation, the visual aspect of Starcraft 2 is wonderful. Battles feature dozens of units or more at once, creating scenes rife with gunfire, explosions, flashing lasers, pulsing energy shields, and everything else that you would imagine happens when three science fiction races clash in combat. There’s enough graphical mayhem to slow down my 2008 Macbook Pro on even the middle settings, but it definitely looks more appealing the more your rig can handle. 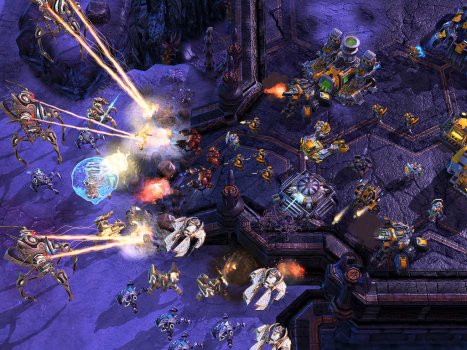 As far as game play goes, the single player campaign is the perfect way to introduce old and new players alike to the nuances of Starcraft 2. For those familiar with the series, many old units, from Marines to Siege Tanks and Battlecruisers, are still present, often with performance and balance upgrades to make them viable in the new environment. New units are of course available, such as the jetpack-equipped harassment Reaper infantry, Hellion jeep-with-a-flamethrower, and the cloaking-capable Banshee assault ship, and each makes its appearance one at a time as new missions unlock them. There are also some campaign-specific units that can’t be used in multiplayer, such as the Hercules uber transport ship, the Transformers-wannabe Predator anti-infantry robot, and the underground flamethrower Perdition turrets.

To put things in perspective, those are just units for the Terran faction. There are new and returning units for all factions, including but not limited to Banelings, Stalkers, Infestors, Sentries, Void Rays, Phoenixes, and more. There is certainly enough diversity to satisfy old and new Starcraft players as well as those completely new to Starcraft or to real-time strategy games in general. If you’re disappointed with the mix of units in Starcraft 2, I challenge you to find a better, balanced mix of options elsewhere. 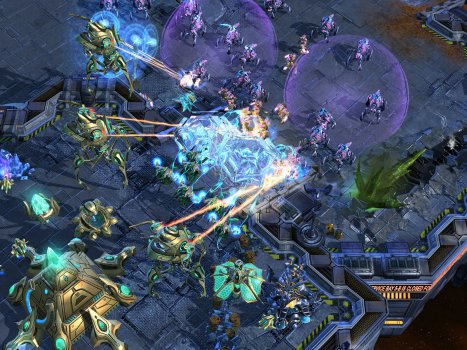 The first thing I did was play through the entire single player campaign on Normal difficulty, or what I thought to be a good baseline for comparison. If it was too hard, it could always be tuned down to Easy and if it wasn’t challenging at all, there are still Hard, Very Hard, and Insane modes. I found that Normal wasn’t all that bad and I never actually lost any of the 25 missions, even if it did take me several weeks to complete the campaign, but it wasn’t a pushover either. There were certainly a few, “Am I going to win this?” moments on the more difficult missions, to be sure, and I was once a Starcraft veteran.

Finally, I moved on to testing out the multiplayer waters. I started with cooperative mode with a friend of mine to take on 2v2 computer opponents. Now if you’re anything like me, the first thing you’ll notice in multiplayer is that it’s blazingly fast; settings are permanently on Faster (on a scale that includes Slower, Slow, Normal, Fast, and Faster), and that means that everything builds and moves much, much faster than in the single player campaign. We won that match, but it wasn’t exactly easy.

Next, I moved on to 3v3 cooperative, thinking it would be just like 2v2. I was mistaken. We were plowed over by 3 computer opponents set on “Medium” (out of Easy, Medium, Hard, Very Hard, and Insane). It was over in minutes.

What happened? I never lost a single mission in the solo campaign, so how was it that we had been beaten so badly against a seemingly moderate set of computer opponents? Maybe 1v1 with humans on both sides would be different.

That’s where I went next, to the “Practice League” where you are allowed 50 matches to get the feel for how the game plays and what multiplayer is like. I got absolutely devastated in my first match. I won my second, but only because I’m pretty sure that the other guy was just pressing random buttons and building structures that looked pretty. My third opponent wiped the floor with my entrails. 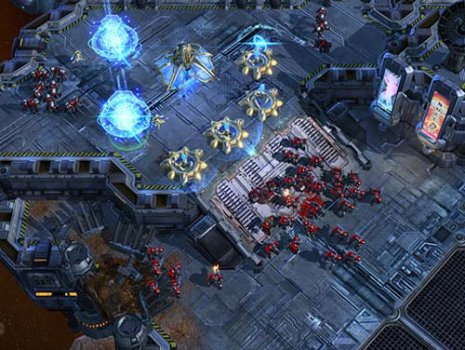 This was brutal. I really hate losing, so I turned to the internet for advice. There’s a myriad of guides available online, both from the official Blizzard forums and from independent Starcraft 2 fan sites, and that’s where I turned. I learned about build orders, hot keys, clever command groups, counters, and a number of other strategies and tips that sounded promising. Essentially, I learned and started to practice exactly what units and structures to build, in what order, and how to do so by rapidly pressing keyboard shortcuts instead of clicking on anything. I hate having to refer to outside websites to learn how to improve in a video game, such as in World of Warcraft, but it seemed to be a necessary evil in order to have even a chance at enjoying the multiplayer aspect of Starcraft 2.

Armed with new knowledge, I dove back into practice league 1v1. I won a couple matches, lost a few more. I no longer felt like I was completely hopeless, even when I was losing. I tried out 2v2 cooperative with my original partner and we annihilated the computer on Medium and Hard. Things were looking up.

At that point, I decided that I needed to experience the other human versus human multiplayer elements, so I tried 2v2, 3v3, and 4v4 with human opponents and allies in every spot. All of this was accomplished by a straightforward, easy to use Battle.net client that allows you to chat and party with the people that you already know in order to quickly find the kinds of matches you’re looking for. The game even keeps track of your performance and ranks you in each league (1v1, 2v2, 3v3, and 4v4) in order to intelligently match you up against similarly skilled opponents.

So I rendezvoused with my cousins for 2v2, 3v3, and 4v4 and I had the chance to play around a dozen or two games total, ranking Silver in the 2v2 and 3v3 leagues and Gold in the 4v4 league with our teams. After that many games and that much exposure to enemy and ally behavior, I felt like I learned a great deal about how to play the game and how to be good at it. I played the game so much in a few days that all I could see when I closed my eyes were units and maps.

I tried 1v1 again. I lost horribly several times before getting frustrated and quitting.

Putting it in Perspective

Why does this all matter? Why should you care what my Starcraft 2 experience was like or where I ranked? Well, back in 1998-2000 I played the original Starcraft semi-religiously. I wasn’t bad at it. Since then, I’ve been playing video games in general for my entire life, including my fair share of real-time strategy games. I am not new to any of this. With all of that in mind, I was frequently obliterated in multiplayer, especially in 1v1 matches. The competition out there is not just insane, it’s downright asinine at times. With team play, you have margins for error and creativity; no match is the same twice and it’s always anyone’s game until one side absolutely decisively wins it. In one on one multiplayer, if you make a mistake, you’re done. If you don’t build your units and structures perfectly in the first three minutes of play, it’s over. If you forget to scout or build too many workers or forget to research or don’t adequately counter your opponent’s strategy with the ideal counter, you lose. It’s a brutal battlefield that’s suited to hardcore strategy enthusiasts and people that like to feel like automatons while playing games and it is absolutely unforgiving to new or casual players. If you are buying Starcraft 2 for the multiplayer, this is something that you absolutely must know, especially if you are new to Starcraft or to real-time strategy.

Now if you’re buying Starcraft 2: Wings of Liberty for the single player experience, carry on completely unabated. The single player campaign is as close to perfect as I have ever experienced in a real-time strategy game, with logical mission progression, enough challenge (through variable settings) to keep players of all skill levels coming back for more, and enough diversity to stay interesting up through the very end. The storyline feels like a high budget science fiction action movie, too, and you’ll often find yourself involved and motivated to keep going for just one more mission.

Starcraft 2: Wings of Liberty was reviewed with a promotional copy given to DigitalReviews.net for reviewing purposes. I completed the single player campaign on normal difficulty and spent two weeks on 1v1, 2v2, 3v3, and 4v4 human multiplayer modes, ranking Silver in the first three and Gold in 4v4, and several games on cooperative (versus computer) 2v2 and 3v3 modes. Starcraft 2: Wings of Liberty is published by Blizzard and is available now for an MSRP of $59.99.