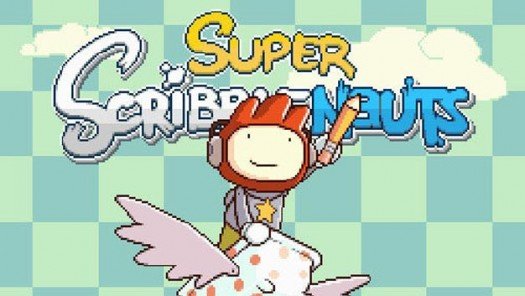 Developer 5th Cell returns to the Nintendo DS with Super Scribblenauts, sequel to the hit creativity based puzzle game.

Does the second iteration add enough to stand up to its predecessor?

After playing Super Scribblenauts for what seems like an eternity, I finally finished it this week. I’ve played through the original, too, and I have to admit that the Scribblenauts series is one of the most unique game series I’ve ever gotten my hands on.

For those who’ve never played or heard of Scribblenauts, it’s a game where your character, Maxwell, is inserted into a level and given a brief prompt on what the puzzle at hand is. From there, you have access to a notebook where you just write or type in words that are then instantly created for you. You can type in anything from “Robosaur” to “Cthulhu” and “Katana” to “Professor” and as long as it isn’t trademarked, obscene, or offensive it’s probably recognized by the game. Your only limit on how to solve puzzles is essentially your imagination. To make things even crazier, Super Scribblenauts adds adjectives to the mix, which I’ll talk about below.

Here’s what stood out to me about this long-anticipated sequel.

+ Level diversity is where Super Scribblenauts shines the most. Whereas most levels in Scribblenauts could be solved with a flying thing, a rope-like object, and maybe a weapon, the levels are vastly different in Super Scribblenauts. New level types include adding parts to a machine until you have everything you need for the goal object (e.g. Snowman, Solar System, etc.), levels where you have to add the right objects to complete a scene (e.g. a birthday party or a city), restrictive levels that prevent the use of certain kinds of objects (e.g. no weapons), levels where you have to equip Maxwell with the right kind of gear, garb, and gadgets to please a panel of judges (e.g. a pirate, a vampire, a werewolf, and a ghost), levels where you have to make objects that share traits of adjacent objects in a Hollywood Squares-like grid (e.g. something that’s like both a dog and a house, such as a Furry House), and action levels where you can use whatever you’d like to solve a speedy, reflex-based puzzle. There really are a ton of different levels and the mix is very satisfying.

+ The most obvious new feature aside from level design is the use of adjectives, which I thought both added and detracted from the game. Overall, the use of adjectives was welcome and promoted creative thought, but sometimes I found that being able to use adjectives made things almost too easy. Level hazard preventing you from driving your vehicle from point A to point B, for instance? Instead of a Truck, just make an Indestructible Truck. Adjectives sometimes break the game the way Black Holes broke the first Scribblenauts, but overall I thought they were a ton of fun. Without adjectives, I could have never solved the sleeping lion level with Delicious Chloroform, for instance.

+ Super Scribblenauts boasts a gigantic dictionary of useable items and creations, even compared to the original. Maybe it’s just that you could modify anything with adjectives and that made the game feel infinitely more open, but I beat the game with about 600 nouns and 200 adjectives and I felt like I had only barely scraped the surface as far as useful stuff I could have been making. It’s rewarding to just sit down with the free form menu screen and make stuff simply for the sake of discovering new things and experimenting: That’s how cool this game can be. 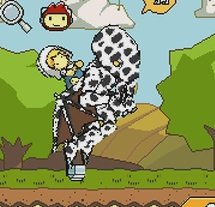 + The game controls are much better than the first Scribblenauts, but they’re still not perfect. Sensitivity issues are fixed across the board, meaning you won’t obliterate yourself every time you don a jetpack anymore. You can directly give items to NPCs, too, which really helps when you want to give them Adjective Potions to bestow useful properties at will. The whole interface feels much smoother and better than Scribblenauts, but it’s still a bit clunky.

+ The Super Scribblenauts hint system is great. I used it every few levels and I found that it was extremely helpful in clarifying exactly what a given puzzle was asking you to do. Some of the hints are pretty useless and some levels are still painful to solve, such as the snowman level I’ve mentioned a few times, but the hint system generally just makes for a smoother, more enjoyable game.

– Ultimately, Super Scribblenauts felt more like an IQ test than a game, even compared to the original Scribblenauts. When I was playing through the main game, I felt like I was trying to pass basic tests, such as remembering every piece that goes on a snowman or being able to list three random astrological signs. Despite the diverse level design, it felt like there were very few ways to effectively solve any given puzzle, ergo it felt more like a test of getting the right objects than of finding a creative solution. In fact, creativity only makes things harder on you as the player most of the time, which is a shame given how much freedom the dictionary and use of adjectives gives you. 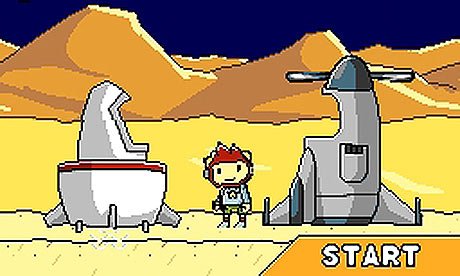 – The controls are still pretty bad, so at least Super Scribblenauts is a thinker’s puzzle game and not an action game. In fact, I found that the action stages are actually pretty miserable to play through at points because the controls are so unresponsive in terms of controlling your character. In fact, I think the third Scribblenauts game would be so much better if it somehow didn’t even give you a character to control. Sorry, Maxwell.

– I wish there was a way to discover new words and adjectives besides the internet, a strategy guide, or blind experimentation. Some sort of simple system to suggest new, unused words or categories of words would be cool. As it stands, the dictionary is somewhat overwhelming to discover on one’s own.

– Maybe it’s just me, but I found the level editor to be almost incomprehensible. I normally love level creation, but in this case I’ll leave it to the pros.

Super Scribblenauts is a real gem of a handheld game despite its faults. It isn’t always the most fun game in the universe, but it’s more intellectually stimulating than anything else currently out there while still remaining a game. A dedicated level editing community and better controls could make Super Scribblenauts outstanding, but even as-is it’s still a worthwhile experience. Maybe the next time you reach for a handheld game, put down the mindless time killers like Angry Birds, which is a great game, don’t get me wrong, and give Super Scribblenauts a whirl instead; your brain will thank you.

A copy of Super Scribblenauts, developed by 5th Cell and published by Warner Bros., was provided to DigitalReviews Network for review purposes. I played through the entire main game, using 597 nouns and 220 adjectives in the process, before writing this review. Super Scribblenauts is available for the Nintendo DS at an MSRP of $29.99 USD.