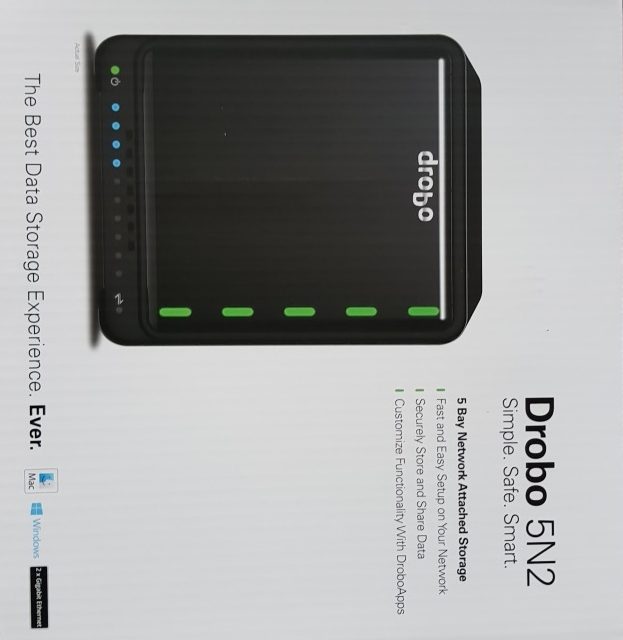 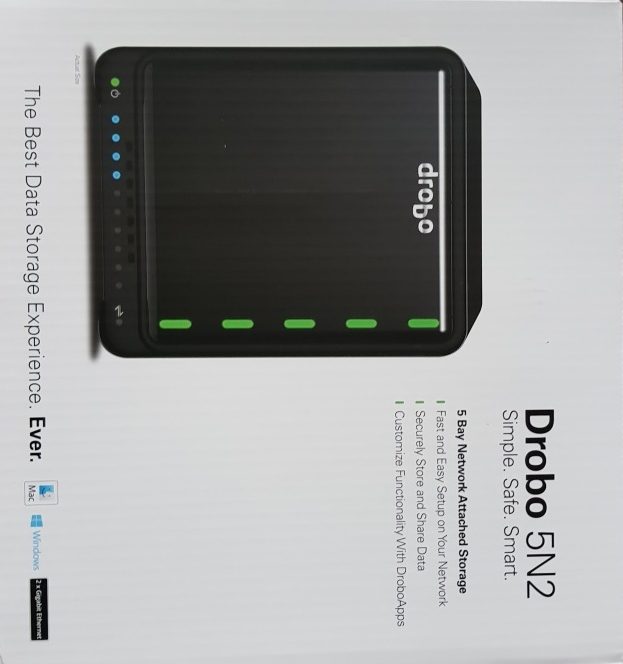 We’ve followed the Drobo developments ever since they were launched about a decade ago but never actually laid hands on one, despite having reviewed dozens of NAS units in that time.

The Drobo seemed, well, too simple to use to be any good…
That prejudice of mine now sees that simplicity as its main selling point.

Let’s find out why.

Originally the Drobos were only Direct Attached Systems, later the Network Attached Systems came on the scene. The Drobo 5N2 is its latest product in this series with 5 drive bays.

The unit looks simple in design with a couple of unique features like the magnetic front cover that can easily be detached to get access to the drives. These can be inserted without tools or caddies with screws. I like that. Another one is the dimmable LED lights that also indicate the status of the unit, the individual drives and the used capacity.
The only issue for me is the low hum vibration from the spinning drives. I feel that can be improved.

We inserted 3 drives and pressed the power button at the back after we connected two ethernet cables to the Wi-Fi router. And we installed Dashboard. Initially no Drobo was found but after 1 minute it was all sweet.
The Drobo will only take a couple minutes to complete the power on cycle compared to the rather long start-up times of QNAP units for instance.. In the meantime the 10 blue LEDs below the drives did their not very helpful initialisation dance. For my eyes they were just flashing in random patterns. Later of course they would indicate the percentage of overall disk capacity used.

At any moment I expected to be asked what RAID I wanted to choose but no, within a few minutes all the drive bays were a solid green and the Dashboard screen reported a healthy NAS.
So how about redundancy? How is your data safeguarded? 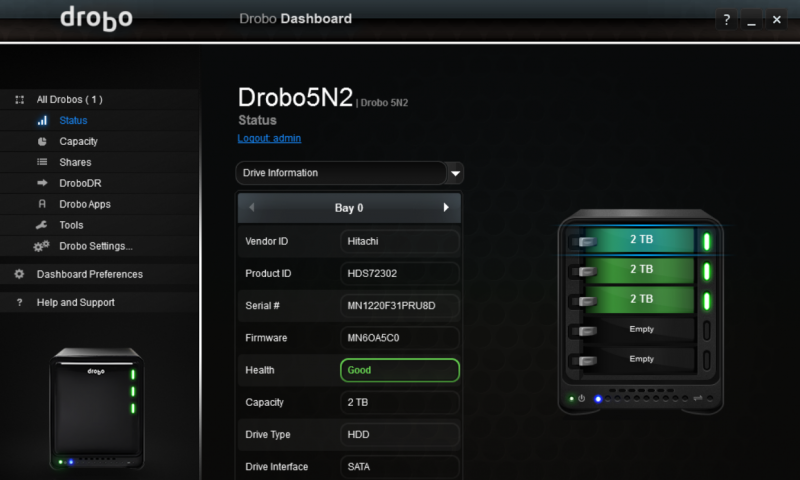 Well, it turns out that Drobo has a proprietary way of achieving redundancy much like the various RAID options have but without the convoluted setup and recovery mechanisms. They call it BeyondRAID. It allows for redundancy and the failure of 1, 2 or even 3 disks.
Take it from us: HDDs (and SSDs!) fail fairly frequently…
On that score I’ve never have had a real NAS unit failure so these things are pretty reliable (with the exception of the power unit). It’s best if you have a UPS for clean power to both your computer and your storage devices. 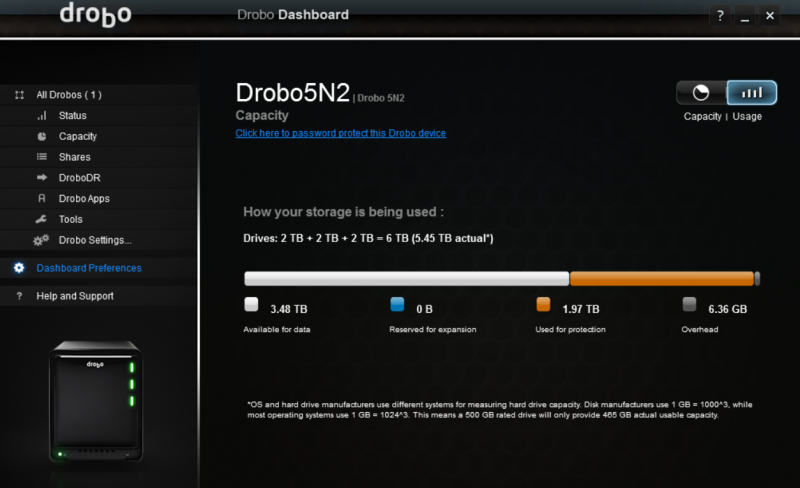 It’s also best to have drives with similar capacity as BeyondRAID will set aside the capacity of the biggest drive for redundancy. Not that specific drive but whatever the capacity of that biggest drive happens to be. In my case 2TB.
It’s very similar to the Synology Hybrid RAID setup we looked at years ago. A great concept and well executed in the 5N2 and key to their unique selling point across the whole range. 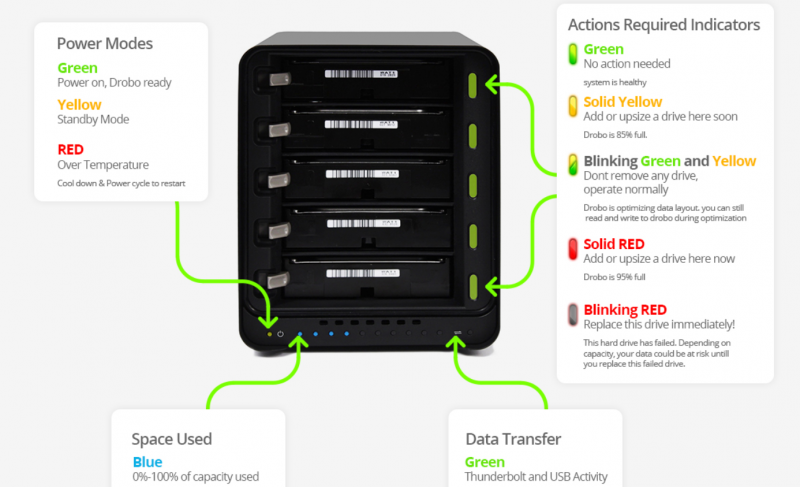 To transfer a 500 GB external HDD’s content (about 100,000 various files) plugged into a USB 3.0 port on my computer and the Drobo attached via a Cat 6 cable, took about 4 hours. That’s an average speed of between 35-40 MB/sec. You’re not gonna win any performance races with that, but that’s OK.

According to their website, Drobos are self-healing, self-managing and even self-optimizing.
So we put that to the test.

We started out with 3 Hitachi 2TB drives and then added a 1TB drive to the mix and another 2TB drive that we knew was faulty. Just wanted to see how the Drobo would tackle this. And to make matters worse we took those two out after a minute and swapped them around.
The blinking red light told us to replace the faulty one from slot 5 and the Dashboard and flashing lights on the unit indicated that the new lineup was being reconfigured. We could still use the NAS functions but not take out any drives for the next hour or so. After that, everything was in the green again! Easy. 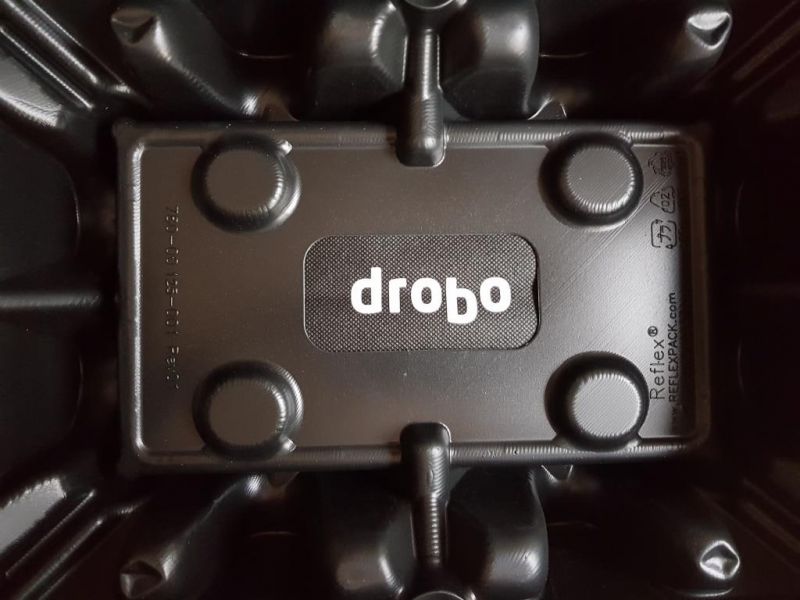 Where the Drobo excels is in the ease of replacing or adding drives. Without a doubt this is the most user-friendly NAS unit we’ve reviewed in dozens of articles from names like Synology, QNAP, Thecus, ASUSTOR and the like. Sure, it’s aimed at the non-techies among us so it might miss a few features that the big guns trot out. And, it’s not a speed monster, even though there’s provision for an mSATA solid state card to speed up proceedings.

But it’s fast enough for most home users and small businesses. And if it’s mainly a backup machine then speed is not really critical. Ease of recovery is. And also ease of configuring which is totally done on the fly auto-magically. Personally, that’s how I like it and that’s why we can heartily recommend the Drobo range. 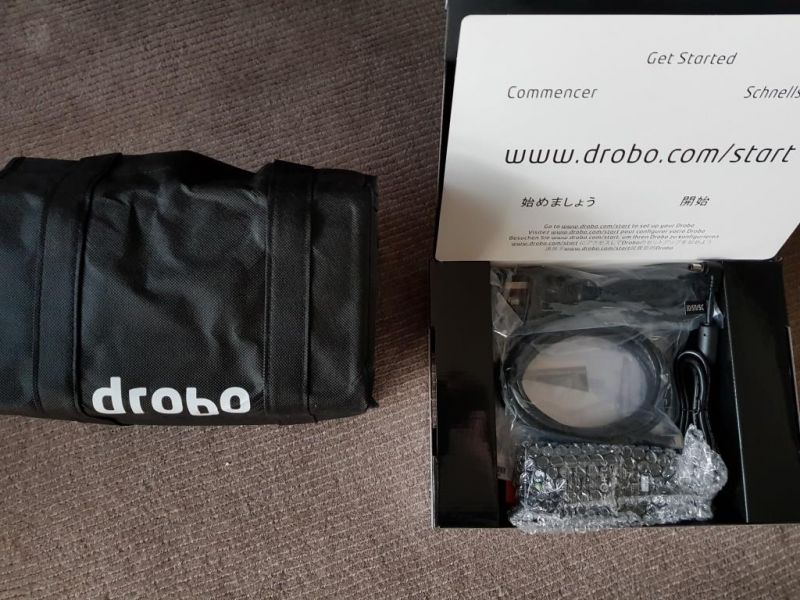 Check with Anyware.com.au who kindly provided this unit which you can buy for less than 900 Aussie bucks in many shops.

Now that I’m hooked on their ease of use I’m looking forward to reviewing their next model which hopefully will be a speed monster.