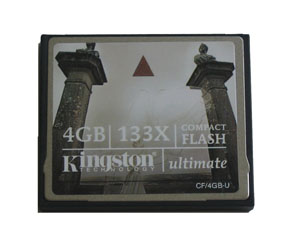 Cameras are rapidly increasing in the number of Megapixels these days.  In fact, we have just started seeing compact consumer cameras capable of taking pictures of up to 10 Megapixels!  Whether those cameras take quality pictures is another story to tell.  In general, with an increasing Megapixel count, that means you’re working with larger pictures.  And with larger pictures, that’s definitely going to mean larger file sizes.  The moment you press that snapshot button, the camera needs to store that large 10 Megabyte file (just an example) as quickly as possible into its memory.  This example leads us into the product we will be taking a look at: the Kingston 133X Compact Flash (CF) memory card. 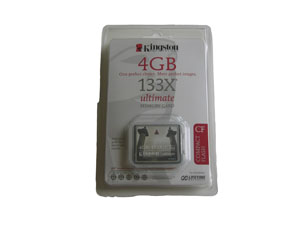 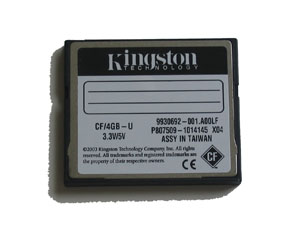 A bit of terminology: What does 133X mean?
When I said Kingston 133X Compact Flash memory card, some of you may have raised your brow pondering what 133X means.  133X is basically a term used to describe how fast the card is so it can distinguish itself from similar products.  While you may have two products which have the same capacity, they may be completely different in terms of speeds.  A 1X product is capable of up to 150KB per second.  So if you do 133 times 150KB per second, that equates to 19,950KB per second.  When converting that to Megabytes, it is approximately 20 Megabytes per second (1024KB in 1 Megabyte).  Just to give you some values of comparison, Kingston offers other memory cards with 120X, 100X, 50X and 45X.

A look at the CF card
Honestly, this is a tough review to write.  This is your typical CF card in terms of size and how it looks.  It doesn’t get any simpler than that.  It is clearly labeled that this card has a storage capacity of 4GB and supports speeds up to 133X.

Performance
Testing the performance of this card is a bit tricky.  Typically, when working on reviews, I take pictures using my Canon camera which uses a CF card as storage.  After taking my pictures, I have to use my cheap "all-in-one" card reader in order to transfer the pictures from the CompactFlash card to my computer so I can edit them in Photoshop.

The obstacle in testing the performance of the card is that data is passed from the the CF card to the card reader and then to my computer.  Different card readers have different controllers.  Since some are fast and some are slower, the full speed of the CF card may not be utilized fully.  Luckily, with the Kingston 15-in-1 high speed reader, I was able to measure the performance of the card.


The Extra Stuff
Let’s be honest here, even with a good performing product, there is always that competitor that is near the same level.  In that case, Kingston has included the Ontrack EasyRecovery Professional Software to help differentiate it from the rest.  The setup installation file was already on the CF card.  You just need to double click the file to install it on your computer.  Don’t be fooled by thinking this is some useless software.  This is a fully featured file recovery software.  The main functionality of the software is that it allows you to recover files from your drives whether it has been deleted or formatted.  In a sense, this is useful tool, because there are times where a drive may become corrupt or you accidentally delete an important file. 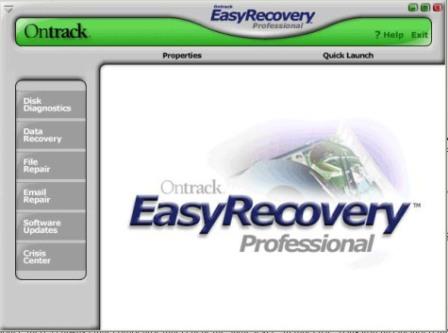 Conclusion
You really can’t go wrong with Kingston’s 133X CF memory card.  Backed with a lifetime warranty, you can always have the product replaced if the product ever becomes defective.  The Ontrack EasyRecover Professional software really does provide some extra value to the product.  The performance of the product was high as expected and I’m sure will do fine whatever application you use it for such as using it in a camera or a PDA.  The speed of the card is enough to be able to watch videos off of or store very high resolution pictures. 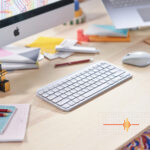