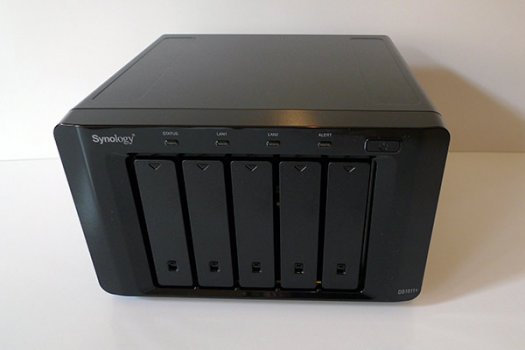 In a networked home or small business, a Network Attached Storage – or in tech parlance, NAS – is a near essential piece of equipment these days. The Synology DiskStation DS1511+ offers a scalable RAID storage solution with a maximum capacity of 45TB. Forty-Five Terabytes!

Okay, 45TB is a bit of a stretch. While technically possible, commanding 45TB of storage with the DS1511+ can only be achieved by coupling it with two DX510 five bay expansion units. Using only its internal drive bays, the DS1511+ is capable of providing a total of 15TB with today’s 3TB capacity hard drives which sounds less impressive than 45TB but even by today’s standards, nothing to scoff at.

BACK IN BLACK
Beyond the unit itself, the DS1511+ package comes complete with two small bags of screws, a CDROM, two CAT5E Ethernet cables, a standard computing power cable and the customary sheets of last minute and warranty information. 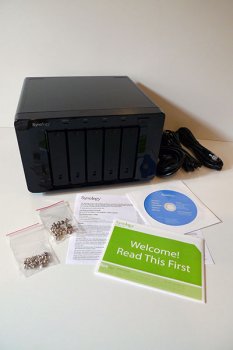 Despite the DS1511+’s business target audience, its general design and aesthetics are impeccable. From its cool black metal top and sides to the plastic piano finger print magnet black front fascia, the DS1511+ looks anything but something designed to be hidden away in the back office.

The front fascia is dominated by five vertically mounted but horizontally arranged drive bays. Above the centred drive bays are four LEDs, used to indicate operation of the two Gigabit LAN ports (one LED each), a general status light and an ominous alert light. To the right of the LEDs is a large power button which lights up blue when the unit is on. 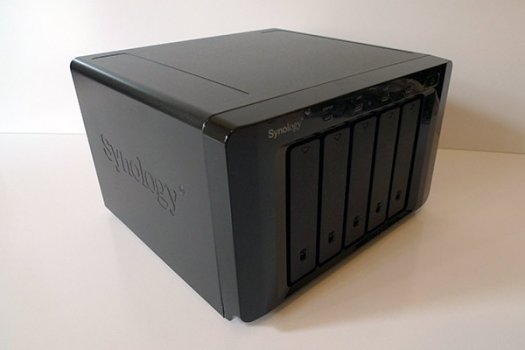 The rear of the unit is dominated by not one but two 80cm fans and a relatively large white label listing the units MAC addresses, serial number and other general information. To the right hand side, a VGA port sits above four USB 2.0 ports and two Ethernet ports. Towards the bottom of the unit, two eSATA ports are present, while the far right features a power connector port as well as a Kensington lock point. 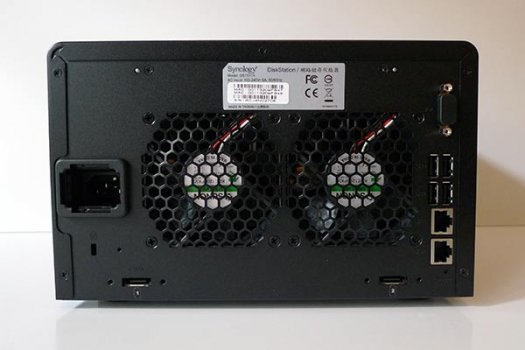 The unit sits atop four sturdy independent legs and beyond a large Synology logo embossed on each side, the top and sides of the unit are unremarkable.

USAGE
With hard drive prices shooting through the roof, we scrounged around for some spare winchesters and thankfully found three 500GB Western Digital hard drives lying around the DigitalReviews lab.

Over the years we have seen many different ways to mount hard drives within NAS unit drive bays and the DS1511+ is no exception. Each drive is held in place via a fairly sturdy plastic caddy via screws. The caddy has a dual insertion mechanism in that it slots in and then sort of clicks into place by pushing down on the lower part of the mechanism. Once securely in the bay, the caddy can be also be properly locked in place via a small slider. Apart from this lock, the only other visible feature on the front of the drive caddy is a small triangle of translucent plastic which is able to shine through the drive access when eveyrthing is in place.

After plugging in the power and Ethernet cord, we hit the on button and after about thirty seconds, the DS 1511+ gave a loud beep and displayed a solid blue glow from its power button and a flashing orange status light.

With it’s dual fans, the noise the unit produced was slightly louder than the previously reviewed Promise SmartStor units but was was quiet enough to be a non-issue in most environments.

After finding the DS1511+’s allocated network address in our router, we opened up a browser to see if we could hit its web interface. Nothing.

If all else fails, follow instructions. Included in the pack was a small folder sheet with “Welcome! Read this first” printed in bright green on it which suggested using the included CDROM to get things cooking.

Upon browsing the CDROM, we could see installations for multiple operating systems: Linux, Max OS and Windows; PDF documentation and a folder of what appeared to be firmwares.

We opened up Synology Assistant and the DS1511+ appeared instantly. Double clicking the entry suggested that we needed to install a DSM or DiskStation Manager. Rather than use one supplied on disk, we went online and downloaded the the latest stable version, which at the time of writing is still version 3.2.

Once the installation was complete, browsing the unit’s network address in a browser now resulted in the web interface login screen. Okay.

We followed the wizard and ended up with a 922.49GB  “Synology Hybrid RAID” partition. After hitting the Synology Wiki we discovered that Synology Hybrid RAID (SHR) is based on the Linux RAID system and in our three drive setup, SHR chosen by the wizard maintained one drive redundancy, ala RAID 5. For a detailed look at how it all works, please take a look at Synology’s own explanation. For those who want more traditional RAID setups, standard RAID JBOD 0/1/5/6 and 5+ hot spare configurations are also supported. 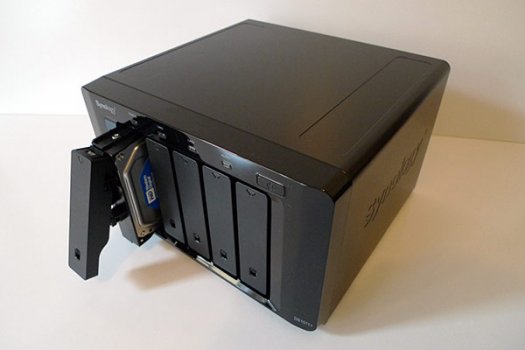 Our three 500GB drives took approximately an hour and a half to go from unconfigured to “good to go” – including bad sector parity consistency check.

We liked the interface in general and with its neat multitasking environment, it feels more like an operating system in a browser, than a NAS unit configuration interface. The sheer breadth of settings and configurations options is amazing, from setting up an UPS device right through to BitTorrent, News Groups and FTP downloading the DS1511+ is feature packed. 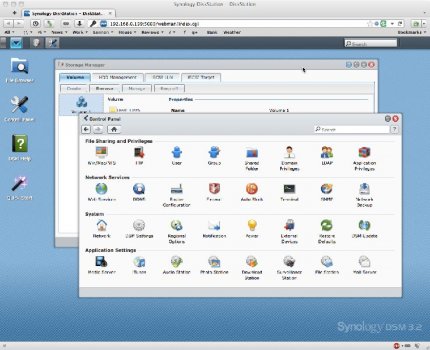 Among features tested, iTunes support, setting up multiple user accounts, email notifications DLNA media streaming and general file management over the network all worked flawlessly over our Gigabit network. The unit also supports more advanced features such as LDAP server support, HTTP web serving, iSCSI Target mode and the connection of multiple USB storage devices and surveillance cameras. Not everyone will use all of these feautres, but they are nice to have and also makes the DS1511+ more likely to cater to a wide variety of uses.

PERFORMANCE
To measure performance we used the AJA System Test utility v9.0.1 as well has old school stopwatch transfers. While the AJA System Test figures are not the be all and end all of benchmarks as they can only report on a single thread, as we have said before, we believe that coupled with the finder drag and drop results, they make a fairly good indicator of relative real world performance.

It is also worth noting is that all our testing employed an entry level 2011 Mac Mini with a stock standard 5400RPM 500GB hard drive inside and since it’s all done via a screen shared computer, some reduction in actual performance figures is to be expected.

Interesting to note the very long time taken to write 16GB of small files. Having moved these pesky files around our network before, we think that OS X Lion, coupled with reading off the stock standard Mac Mini HD are the key bottlenecks creating these results.

And finally, we once again stress that all test were undertaken on a live SOHO network with other network traffic present. All equipment was Gigabit certified and all cabling used was either CAT5e or CAT6.

CONCLUSION
The DS1511+ is a very capable and robust NAS device which provides users with plenty of business class applications as well as home user conveniences. The entire package – software and hardware was excellent and in all our use, proved rock solid. Beyond the slightly more convoluted than normal setup process, once installed, the interface was easy to use. While its sheer sheer breadth of settings and features may stump some NAS novices, the interface does a fairly good job of organising things in a fairly logical way. 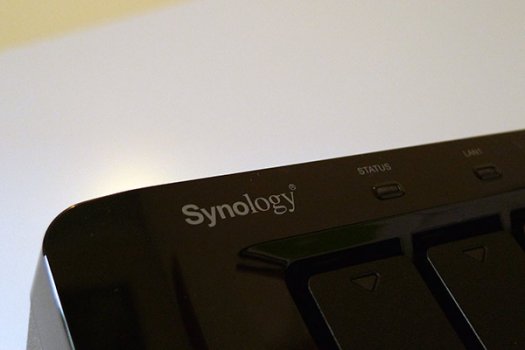 In Australia, the DS1511+ can be found at many discount IT retailers for a tad under $900AUD. For more information about the DS1511+, you can visit their online product page.