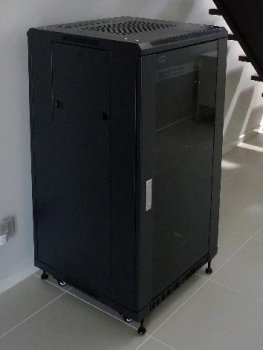 While I have a personal distaste for the prosumer blend, the reality is that the lines between professional and consumer grade electronics equipment is quickly vanishing. With network attached storage devices growing in popularity and larger switches being used to connect almost every appliance imaginable to home networks, the problem of where to house all this gear comes to the fore.

For those unaware, rack enclosures are essentially an industrial solution for housing professional communication, computer or even commercial audio/video equipment. The whole rack system is standardised so that any rack mount appliance (NAS, UPS, switch, etc.) can easily be fastened to any 19″ rack cabinet via screws, provided the enclosure is deep enough.

Rack equipment is measured in RU, with RU being the height of a standard Rack Unit – which for the record is 1.75″ (or 44.5mm). The OnyX rack enclosure reviewed here is 22RU which means that it can house 22 standard rack units.

At 22RU, the Ausrack Floor OnyX stands 1170mm tall on the included castors and while it comes in a deeper variant, the reviewed unit is 600mm deep and a fairly standard 600mm wide. And did we mention it is heavy; Just a tad under 70 kilos. Empty.

FIRST IMPRESSIONS
You know something is heavy duty when it comes delivered on a metal plinth. The OnyX was certainly a two person lifting experience and even with its side panels removed – to help lift the beast – the enclosure felt extremely rigid and well constructed. And B&R backs this feel with a static load rating of 500kg. 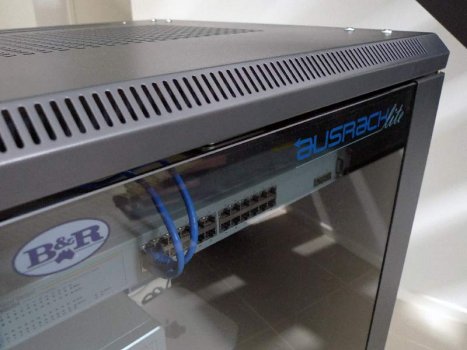 Despite its industrial build and feel, the enclosure comes with pretty much everything a novice would need to make a foray into the rack mount arena: The OnyX comes standard with a power rail (rack mounted power board with six outlets), a vented shelf rated at 30kg, clearly marked bays and a set of twenty odd rack nuts and bolts.

Also included are both castors and adjustable feet as are two exhaust fans mounted to the enclosure’s roof. Four keys (two for the front door and two for the rear) are also included to keep your gear safe. 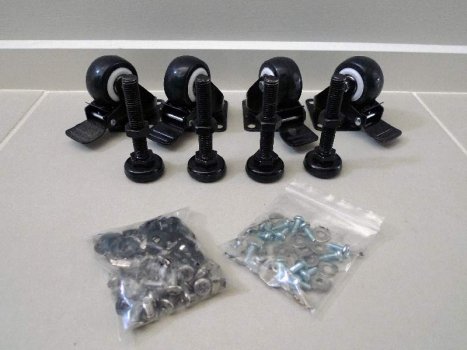 Once we got the enclosure off the plinth, we carefully slid it onto its side and screwed in the included castors and legs. It’s worth noting that other than the castors/feet, the unit comes complete so no other assembly is required.

As we placed the Onyx on it’s own feet, we got our first good look at the completed enclosure. Standing just over a metre in height, the enclosure’s uniform powder coat black and glass finish somehow managed to look both industrial and stylish at the same time. 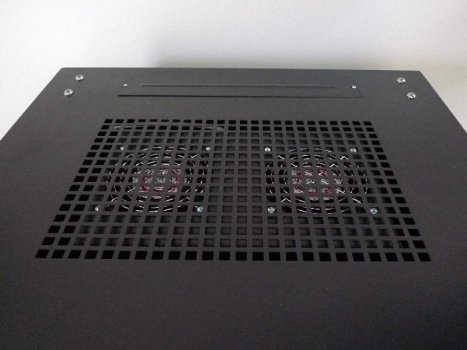 Other than some venting at the top and bottom, the front of the enclosure is predominantly comprised of a large (safety) glass door, framed vertically by two black powder coated metal plates. A nicely crafted lock mechanism is located half way up the metal plate which pops open proudly when unlocked.

Like the front face, the two sides feature small vents at the top and bottom along with full height access panels spanning about half the available width. The access panels are held in place via two small plastic sliders which when engaged, hold the panels on securely. While both access panels can be removed without a key, a small hole exists to fit a locking mechanism which can be purchased separately. 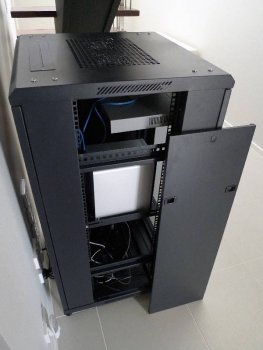 The rear of the enclosure also has the same top and bottom vent setup with a full length and width metal door taking up pretty much the entire rear face. Like the front door, the rear door is lockable.

The bottom of the enclosure features a number of gland plates to feed in cables which are held in place by two screws each. The top has a single gland plate towards the back and a centrally located 235mm x 355mm vent directly above the dual roof mounted exhaust fans. All doors and panels fit relatively well with a good standard of build quality, particularly in light of the OnyX’s industrial roots. 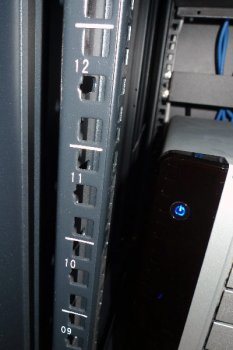 Internally, the enclosure has the same industrial look and feel with every rail and panel feeling secure and purposeful. The enclosure’s four main mounting rails (two at the front and two at the back) are clearly numbered making individual rack bays easily identifiable.

SETUP AND USAGE
While the enclosure comes standard with one shelf, B&R kindly supplied us with some additional vented shelving units which we found easy to fit with the ample screws and cage nuts supplied within the standard enclosure package.

The rear mounted six outlet power rail is also a handy inclusion and usually an extra with this sort of equipment. And like the shelves, can easily be relocated within the enclosure via four screws. 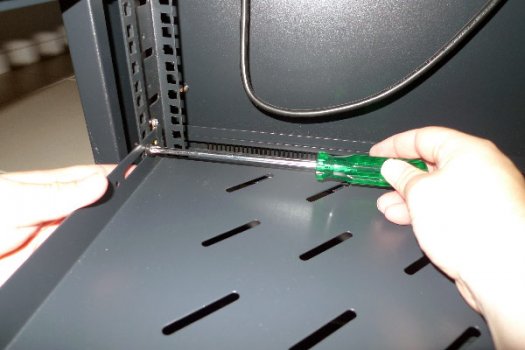 Despite our relative inexperience with such equipment, fitting shelves and rack equipment was fairly painless. The generous access afforded by the front and rear doors coupled with the two side access panels make fiddling with gear inside the enclosure quite effortless.

As this enclosure will be a testbed for future rack equipment and general test gear, we mounted the shelving units fairly evenly throughout the enclosure and loaded up some of our current gear. A typical load we kept in the enclosure included a small UPS, a 24 port rack mount switch, a mac mini connected to a Promise R6 and even a wireless modem/router. 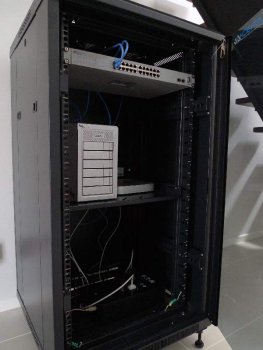 As the photos show, our equipment fit inside the OnyX without issue and due to its many vents, the ambient temperature inside the enclosure presented as a complete non-issue.

Despite this, we did give the mains connected exhaust fans a run and while they proved to be very effective at expelling warm air from the enclosure, they were quite loud for general home use. As the enclosure was located in a residential hallway, the noise level was just too loud. Of course if the enclosure were placed in a garage or other out of the way location – as per its design – the fan’s noise would be well within acceptable levels. 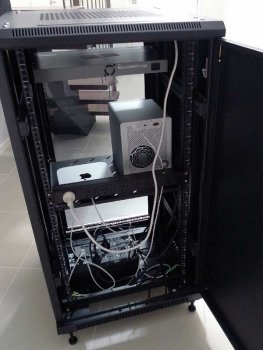 On noise levels, we are happy to report that the OnyX enclosure managed to both internalise the minimal running noise of our equipment and crucially, did not appear to add any new vibrations or annoying resonances which might increase noise output. This lack of noise was true while the enclosure rested on both feet and included castors – which as an aside, worked a treat.

A RESIDENTIAL RACK?
As a purely commercial or industrial enclosure the B&R Ausrack Floor OnyX is a solid choice but with a few minor userland modifications the enclosure is a perfect fit for home use.

As we mentioned, the passive venting works quite well and as the roof mounted fans are quite loud we suggest unscrewing the entire fan shelf and removing it. This actually increases the passive cooling as the switched off fans (and surrounding shelf) are no longer in the way of the warm air rising naturally towards the large vented roof.

The second tweak is possibly the simplest and that is to add extra shelving units to store regular equipment. While having the rack mounting rails there for that rack upgrade are handy – particularly for an increasingly more common 12/24 port switch – installing additional shelving is a dead easy way to integrate more consumer grade equipment.

If you are considering moving to a rack setup, the OnyX is a great way to store your gear quietly and cooly. And if you need the local Minister of War and Finance to sign off on it, be sure to mention how a rack mount enclosure can consolidate your gear, neaten up the cabling and probably reduce the overall physical IT footprint.

All in all, we were really impressed by how adaptable the OnyX was to home use with only the smallest of modifications.

CONCLUSION
The Ausrack Floor OnyX rack mount enclosure is well built, solid and stylish enough for home use – be it tucked away in the garage or due to it’s clean styling, even in more visible locations.

Sure, complete novices may balk at the thought – and we must mention that no instructions are packaged with the enclosure – the reality is that the OnyX rack mount is really just a large Meccano set for adults. Everything screws together with readily available tools and requires no special knowledge – other than basic Meccano. And let’s not forget that it comes fully assembled!

And while it might sound crazy to setup a rack enclosure in a main hallway at home – my local Minister did at first – the photos included hopefully attest that the OnyX isn’t something that looks terribly out of place in a modern home. Actually we’ll go out on a geeky limb here and suggest that it looks kind of cool.

And considering it does its job pretty much flawlessly, we feel the B&R Ausrack Floor OnyX deserves our Editor’s Choice Award.

The B&R Ausrack Floor OnyX retails for approximately $1244AU (including one vented shelf) with additional shelving units available for $62AU.

For more information about B&R’s Ausrack Floor OnyX rack enclosure, including where to purchase, you can visit the B&R product page.