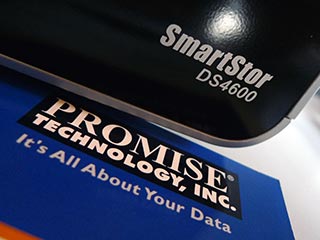 Here’s another in-depth review by our resident NASologist, Paul Moons

With Promise Technology’s new DS4600 you can now avoid all the complicated networking mumbo jumbo and connect a RAID device directly to your computer via USB, Firewire 400, Firewire 800 or eSATA.

Direct Attached Storage (DAS) is the technical term given to describe storage devices that are directly attached to a computer. While your average external USB hard disk enclosure is technically a DAS, the term is generally used to describe enclosures that:

•    Contain multiple hard disks
•    And connect directly to a computer via a non-network (Ethernet) connection.

Typically, DAS devices share their data to a host computer via USB, Firewire 400/800 or eSATA as opposed to Network Attached Storage (NAS) devices which share data across a network via an Ethernet/Wifi connection.

NAS
•    Does not require a computer to serve data
•    (Slower) transfer speeds due to network limitations.

DS4600 Box Contents
Once again, the DS4600 comes packaged with much the same kit as its forebears: Multi-Language Quick Start Guide, US power cable, a short length of Ethernet cable, and the customary CDROM containing the user manual and SmartNAVI software. 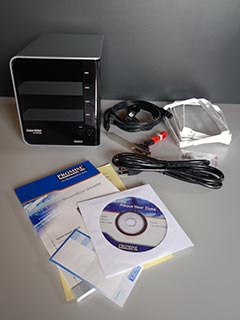 Our sample also contained an A to B USB cable, a Firewire 800 cable and an eSATA kit (internal PC adapter as well as an eSATA cable). In a time where companies are skimping on cables, Promise continues to deliver.

Like all previously reviewed Promise units, the DS4600 utilises a plastic drive rail system to secure the hard drives inside the unit. In all the four units tested, we’ve found the rail system to be both efficient and (besides the initial screwing in) effortless to get up and running.

Mistaken Identity
While the new SmartStor DS4600 looks similar to the NS4300N, it is an absolute dead ringer for the recently reviewed NS4600. From the front, the only differences we could spot were the DLNA sticker and (less obviously) the N to D letter change to the screen printed model name. From the side and top the two units are indistinguishable. 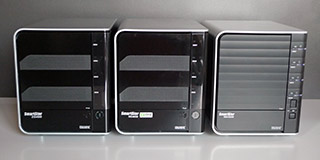 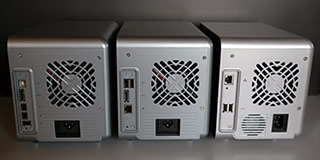 As soon as you take a look at the rear however, the differences become more pronounced and the significance of the single letter change becomes apparent. Like its older siblings, the DS4600 has the regulation power button, fan vent and power plug, but gone is the Ethernet Port. Additions are aplenty however – The DS4600’s rear features a USB (B) port, an eSATA port, two Firewire 800 ports and a Firewire 400 port.

Features and SmartNAVI
While it doesn’t have the network features of the previously reviewed Promise units, the DS4600 does share their RAID abilities. The DS4600 supports RAID 0, 1, 5 and 10 and can accommodate up to four internal hard drives, which at present hard drive capacities can provide up to 8TB of storage space. Despite its four bays, the DS4600 can only use installed discs to create a single array, be it RAID 0, 1, 5 or 10. The creation of two separate arrays is not supported which might annoy the odd power user, but will benefit most others through its sheer simplicity. 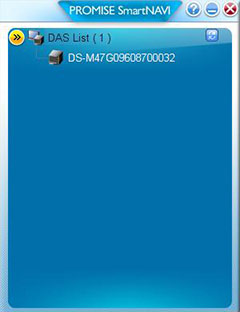 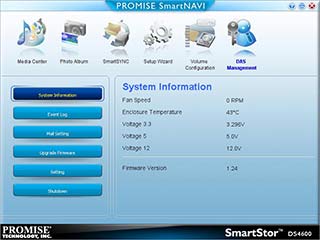 In fact, from the get go, we discovered that simplicity of setup and operation are ingrained in the DS4600’s makeup. After you drop your drives into the DS4600, a simple push of the front One Touch Configuration button creates a RAID array. Depending on the number of drives inserted, a RAID 1 (two drives) or RAID 5 (three or four drives) will be created. Once the array is prepared, it acts as a regular external storage device which can be then formatted for use via the Disk Management utility in Windows or Disk Utility in OS X.

Alternatively, you can use the SmartNAVI software included to guide you through the process on screen, from creating a RAID array to formatting the drive. The SmartNAVI software also uses non-threatening language in the setup process, like: Data protection or Maximum Capacity as choices of “partition schemes.” At the very least, this sounds a lot more user friendly than an esoteric RAID number to assign to a “drive array.” 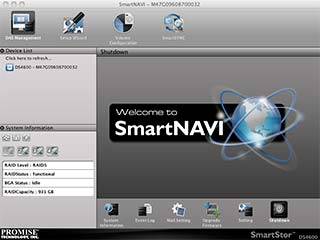 The SmartSync feature allows you to backup folders (or entire drives) from the attached PC to the DS4600. To keep with the simple philosophy, this can be achieved by simply dragging and dropping folders. And once set up, the front One Touch Configuration button can even be used to initiate the backup of files. We set up some automated backups of data and found everything worked as expected. As we’ve been highly impressed with the SmartStor family’s reliability, we’d suggest this is a simple and effective way to keep your data protected from mishaps. Of course, if you use OS X, you’ll be chuffed to know the DS4600 can be used as a Time Machine Backup Disk. 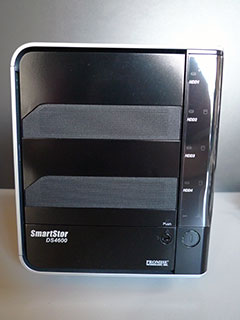 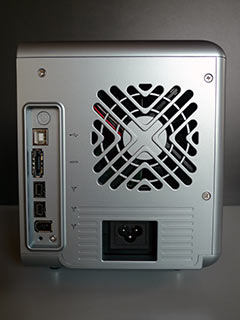 Overall, the Windows SmartNAVI interface works well and allows quick access to all your Promise devices from one location. While we’re not big fans of the current SmartNAVI software on Mac, we’re pleased to report that Promise has listened and is currently working on vastly improving their OS X offering. To this end, please note that all the neat OS X screen grabs are of a pre-release build which is scheduled for public release this October. 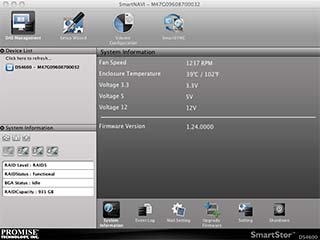 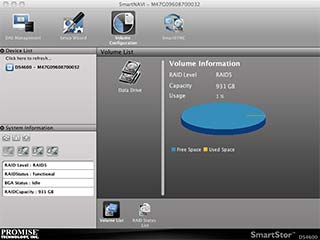 Usage
After we got the DS4600 out of the box, initial setup took no more than fifteen minutes, from attaching the drive rails right through to (quick) formatting the DS4600 ready for use. As mentioned earlier, once you’re up and running, the DS4600 behaves like any other external drive connected to your system.

While we tested the drive under both Windows XP and OS X, we performed the majority of testing under OS X. For transfer tests we hooked up the DS4600 to our MacBook Pro 5,1 running OS X 10.6.1 on a non-standard Momentus 3 7200RPM hard disk. The DS4600 was loaded with 3x500GB 7200RPM Western Digital RE2 Hard Disks and formatted with a Journaled MacOS partition. 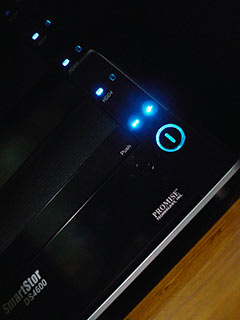 All transfer tests were carried out by manually copying and pasting files using the Finder with timing being achieved via stopwatch.

Transfer times were generally good, with Firewire 800 tearing shreds out of the other two transfer methods tested. It’s also worth noting that despite it’s four interfaces, the DS4600 only allows one interface to be used at any one time. eSATA was not tested.

Considering the DS4600 has four hard drives inside along with a large cooling fan, the unit ran both quiet and cool throughout. Like the previous RAID devices we have looked at, the DS4600 exhibited no unusual or annoying noises other than the soft drone of the cooling fan – particularly under load or when “Smart Fan” was disabled via SmartNAVI. The Smart Fan feature has been present on Promise devices for a while now and allows the DS4600 to vary fan speed based on temperature readings, reducing unnecessary noise and energy consumption. In keeping

the DS4600 is also able to shut down power to its discs in the event that it is disconnected from its host computer. 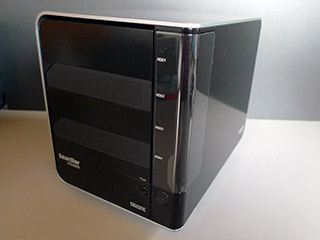 Conclusion
With a capacity of up to 8TB, the DS4600 is a great way to easily and conveniently attach some heavy duty storage to your desktop – The way you want: USB, Firewire 400/800 or eSATA. When you add RAID (1, 5 and 10) data protection (which is usually afforded to more expensive Networked Attached Storage devices) you suddenly have a powerful consumer device. And aimed at the average consumer it is: Easy to setup, simplified management software and reasonable price. 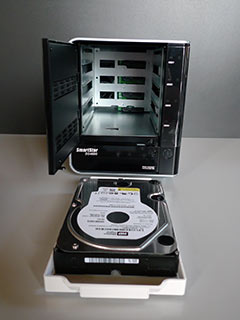 At the end of the day, despite the reduced price and simplified functions, the DS4600 is really just a non-network version of the NS4600. Fine by us.

For more information about the SmartStor DS4600, visit Promise Technology’s website. The DS4600 is available now and has a recommended retail price of $369US.