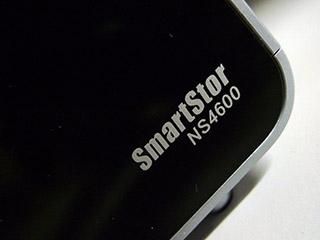 A little under six months ago we took a look at the NS2300N and NS4300N SmartStor Network Attached Storage RAID solutions. The new NS4600 is the latest NAS/RAID in Promise Technology’s line up and looks to improve on their already solid SmartStor range.

Read on for our review of the new NS4600, along with some thoughts on our time with the two older Promise units – six months on.

UNBOXING
The NS4600 comes with pretty much the same kit as the old units: Our sample came with a multi-language quick start guide, US Power cable, a short length of Ethernet cable and a CDROM containing the PDF user manual and SmartNAVI software among other things.

As the NS4600 employs the same neato drive rail system as the other Promise units we have looked at, four plastic rails were also included in the package. Along with a change of colour (from orange to white) the rails now come with a strip of handy sticky labels.

Promise insists these rails create an environment that is less prone to vibrations which lessen the likelihood of vibration related hard disk errors. While screwing the hard disks onto these rails does add a few minutes to the initial setup time, it is a small price to pay for that extra peace of mind.

While we haven’t done any formal vibration testing, we can say that every time we have inserted drives into Promise units, they have felt securely and firmly in place.

DESIGN
While the basic shape of the NS4600 is near identical to the previously tested NS4300N, the new unit’s design features some key differences.

The NS4600 has kept the same black and silver colour scheme of the previous SmartStor units, but the NS4600’s darker element has gone from matte to shiny piano black. With this shininess, comes a completely smooth look and gone is the distinctive ripple design of the older units. The LEDs have also changed from green to blue (during normal operation) and they no longer wrap around the front right hand side.

Other changes include two neat strips of venting on the drive bay door as well as a small locking mechanism on the bottom right hand corner to keep the drives secure from prying hands. While our sample did not come with one, we have been informed that all retail units will come equipped with a small key to lock/unlock the drive bay door. Next to the small lock is a circular "one touch backup" button, which despite its looks, is not the unit’s power button which is now located on the rear.

Turning the unit upside down reveals a small latch which opens up to a completely user accessible power pack – reminiscent of those used in modern notebook computers. While we have found Promise’s previous units to be very reliable, should something occur to the power supply in this new unit, it can be quickly replaced without the hassle of undoing screws and getting dirty.

The NS4600’s core business is to magically create an array of up to four discs optimized for performance or data security (RAID) which you can then access via your (wired) network (NAS). RAID support echoes the NS4300N with 0, 1, 5 and RAID 10 modes available. Network access also remains strong with its Gigabit Ethernet port.

If the above paragraph means nothing to you, it might be worthwhile heading on over to our original NS3200N/4300N review, where we provide an overview of both RAID and NAS technologies.

While providing a basic NAS/RAID solution – currently good for up to 8TB – is enough for some, Promise have packed the NS4600 with much, much more. For starters, the NS4600 is able to share eSATA and USB Hard disk drives across the network as well as supported USB printers. APC Uninterruptible Power Supplies are also supported, adding yet another layer of security to stored data.

To test the USB access we attached a variety of USB disks with a 100% success rate. We were able to access, read and write to a 3.5" Vantec NexStar 3 external hard disk drive enclosure; an old 160GB iPod Classic and even our Lumix LX-3 digital camera (with inserted SD storage card) was shared without issue.

Much of the NS4600’s extra features come from its ability to load external plugins – Our sample was loaded with ML Donkey (Bittorrent Client), Firefly Media Server (Open source iTunes server) and DLNA Media Center allowing media to be shared with other DLNA compatible devices.

A neat party trick, for example, was the unit’s ability to stream video files to any compatible HTML browser. We managed to get compatible media to stream to Safari on our MacBook Pro (and even our iPhone) with no discernible quality issues. And the NS4600’s web based media interface makes browsing (and playing) media a doddle.

Along with iTunes server support, the NS4600 is also able to act as a storage device for Apple’s clever Time Machine system. Once the SmartNAVI software was installed and operating on our MacBook Pro, a few clicks in the Time Machine preference pane successfully added the NS4600 as a Time Machine backup device. Easy.

The NS4600 also features a One Touch Backup function which enables users to make quick backups of selected folders on a connected PC, at the touch of a button. While the One Touch Backup feature can be activated using the button on the NS4600’s front, the configuration is all done via the SmartNAVI software.

All Promise storage devices we have taken a look at have come with the  SmartNAVI software and the NS4600 follows this trend. The SmartNAVI software is fairly easy to use and is essentially a quick and easy access way to access all available Promise SmartStor devices on a network (and manage their many features).

Our testing was done primarily in OSX and the OSX version of SmartNAVI worked well with one exception: The software simply wasn’t Mac-like. The reality is the SmartNAVI tool is a port of the PC version and in OSX it really feels that way. Does this stop it performing what it needs to do: No, but it will definitely clash with OSX’s sleek aesthetics. 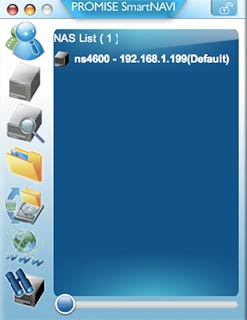 The good news is, that while the SmartNAVI software is handy, it’s not essential for most tasks. The NS4600 has a built in HTML based configuration system, that much like the configuration pages of any modern router, can be accessed from any operating system via a web browser.

What’s more, the more we looked at the NS4600, the more features seemed to pop out of Promise’s shiny new box: Need a web server? No problem! How about remote access of your files over the Internet? Sure thing! And what about replication of data to a sister NS4600 unit for added security: Of course!

And like all SmartStor’s we have reviewed, the basic Network Attached RAID storage component of the NS4600 has proven to be both reliable and easy to use.

Overall performance of the NS4600 was good with real world speed tests showing excellent improvements in both reading and writing over the old NS4300N.

For our speed tests we bundled 1.2GB of 10 megapixel photographs as well as a single 142MB executable file. All transfers were undertaken on a Windows XP desktop.

We had to scrap all of our initial testing conducted with a four drive array as it turned out that one of the drives we were using was faulty and caused a massive slow down in the NS4600’s write speeds.

During all use, the NS4600 remained quiet with noise levels were in line with the those we experienced with the NS4300N which we were perfectly acceptable: Sitting on a desk with a MacBook Pro, the unit was audible but not annoyingly so.

During extended transfer sessions, the NS4600 remained composed, but did seem to heat up a little more than the older unit – particularly on its glossy right hand side. While the NS4600 was notably warmer than our experience with the older NS4300N, it wasn’t anywhere near warm enough to warrant concern. 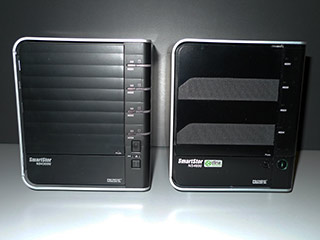 The NS4600 meets RoHS standards and consumes as little energy as necessary when not in use. When on, but not in use, the unit is able to spin down the hard drives so as to reduce wear and tear on the drives whilst also reducing its electricity usage. Promise claim the NS4600 to consume just 6.6W during standby and 51W under load.

Additionally, from our very own wish list comes Wake on LAN support, which can be activated by simply clicking the /locate/ button in the SmartNAVI software from your PC.

Incidentally, we tried to wake the NS4600 from our iPhone (via the free NetAwake.app from Apple’s App Store) and found that it worked perfectly.

For half a year, we have been using our old two bay NS2300N and the larger four bay NS4300N as media and data servers, pushing photos, videos and documents across a small SOHO network. 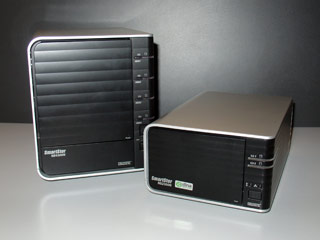 In all this time, the two units have performed flawlessly. In fact, the only issue that comes to mind is that on a solitary occasion, the NS4300N’s power button became stuck in the pushed down position. While this did manage to instill a few moments of genuine panic, after a few strategic pokes, the button returned to its normal function.

Both PCs and Macs accessed and managed the NAS boxes with ease and the ability to shutoff the units remotely via the web interface proved to be invaluable. On no occasion did the units seem to overheat or be bothered in any way – even overnight transfers of hundreds of gigabytes failed to rattle these units.

Also worth mentioning is that both the NS2300N and the NS4300N’s fans have remained constant in their (low) noise level and have not developed any acoustic anomalies over time.

When we originally reviewed the units, their performance, features, build and cost effectiveness convinced us to rate these units extremely highly.

And yet, after six months of rock solid performance, 9/10 almost seems unfair.

All in all, Promise has taken the solid NS4300N and mildly tweaked it with design and feature updates to provide an even more complete storage solution for the masses.

The NS4600 improves on the older units and provided this new unit proves to be as reliable as the previously reviewed SmartStors in the long term, I have no hesitation in giving this unit full marks.

The NS4600 is available now with a recommended retail price of $499US.