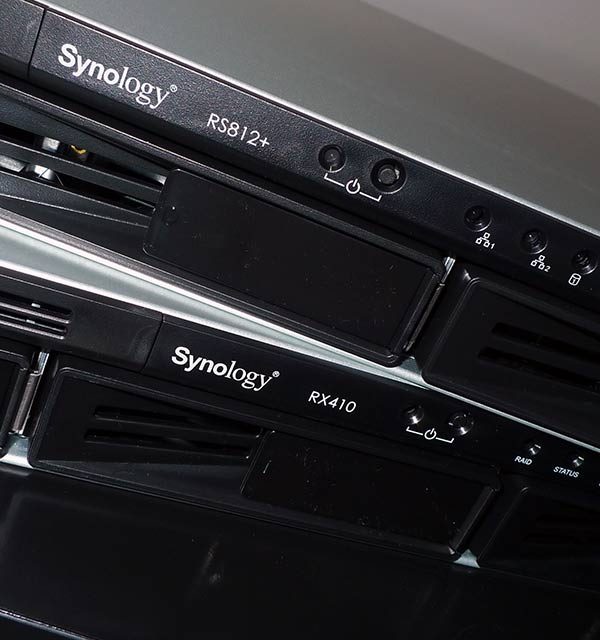 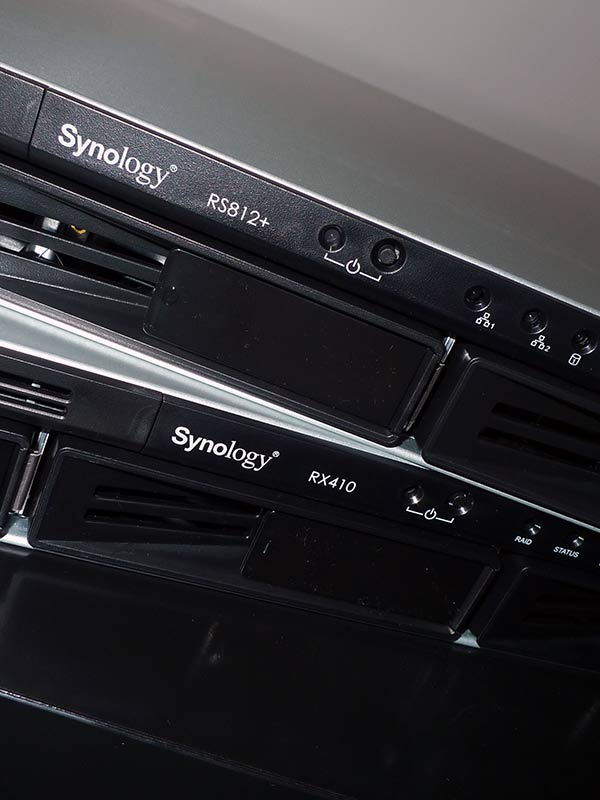 The RS812+ is Synology’s premium four bay rack mounted NAS/RAID device. Together with the RX410 expansion unit, these units pack up to eight 4TB drives for a total storage capacity of 32TB.

Read on as we take a look at these units.

Over the past few years, we have reviewed a number of Synology NAS/RAID devices, from the ten bay flagship RS3412RPxs right through to the unassuming two bay DS213air.

Both the RS812+ and the RX410 come with similar levels of equipment as the non-rack mountable DiskStation units, such as the DS1513+ reviewed earlier this year. 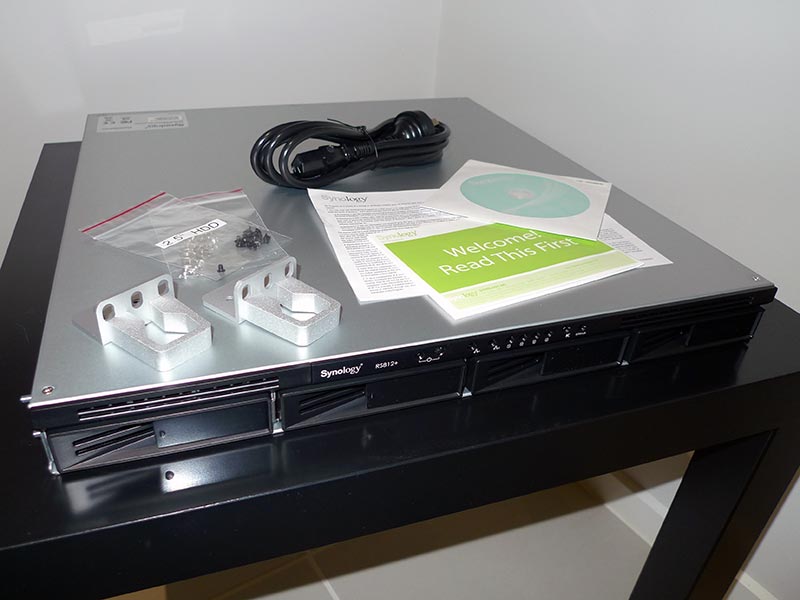 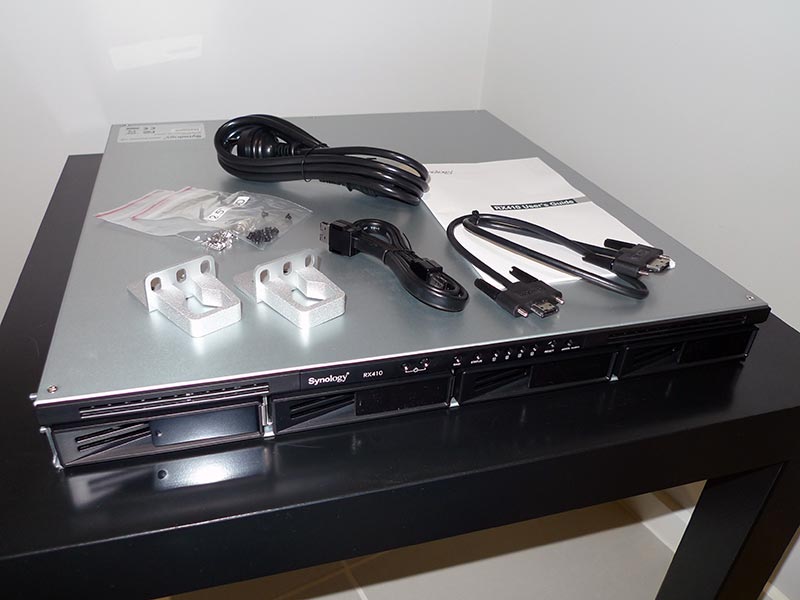 The RS812+ comes complete with a silver rack mount kit, a standard three prong power cable, a CDROM, warranty flyer and short “Welcome” guide. Synology also includes enough screws to mount four 3.5″ or 2.5″ hard drives as well as enough screws to securely fasten the rack mount kit. Unlike its non-rackmountable counterparts, the RS812+ package does not include any Ethernet cables.

The RX410 Expansion unit comes with a largely identical kit, including power cable, silver rack mounting kit and the same bag of hard drive mounting screws. A more substantial User Guide is included with the expansion unit as well as two different eSATA cables, for backwards compatibility with older Synology units. While these cables are of a sturdy design, the cables turned out to be a rather curious choice. More on this later.

Like all of the Synology NAS/RAID devices we have looked at, both the RS812+ and its expansion are shipped from Synology sans hard drives. While Synology provides an official hard drive compatibility list, over the years we have found most hard drives to work without issue. 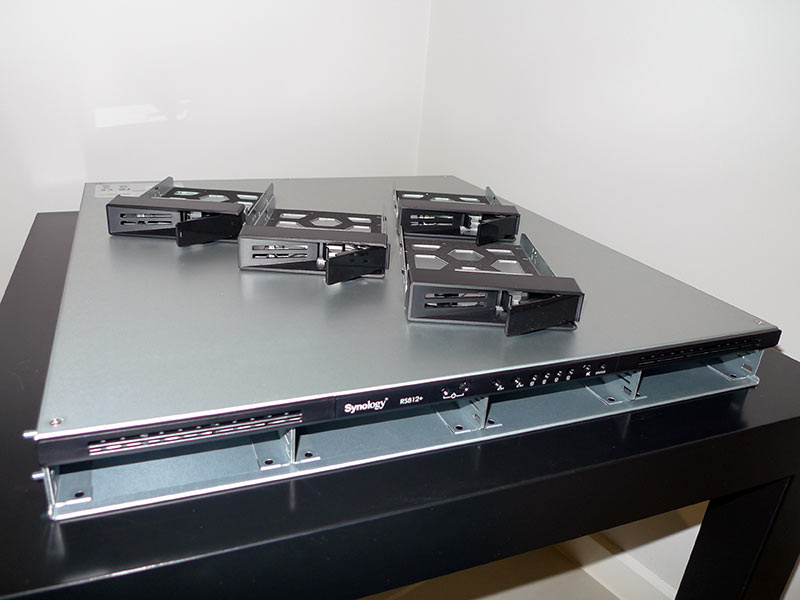 At a glance, both units appear identical. Both the RS812+ and the RX410 are 1U high and feature four prominent drive bays on their front, with an array of LEDs located above. To add to the subterfuge, even the front vents are identical! In fact, other than the small LED labels and actual product nomenclature, these units are, from their front face, visually identical.

The rear of the unit’s however are very different. The RS812+ has four fans, a three prong power receptacle, two USB ports, an eSATA port, two Gigabit LAN ports and a console port. 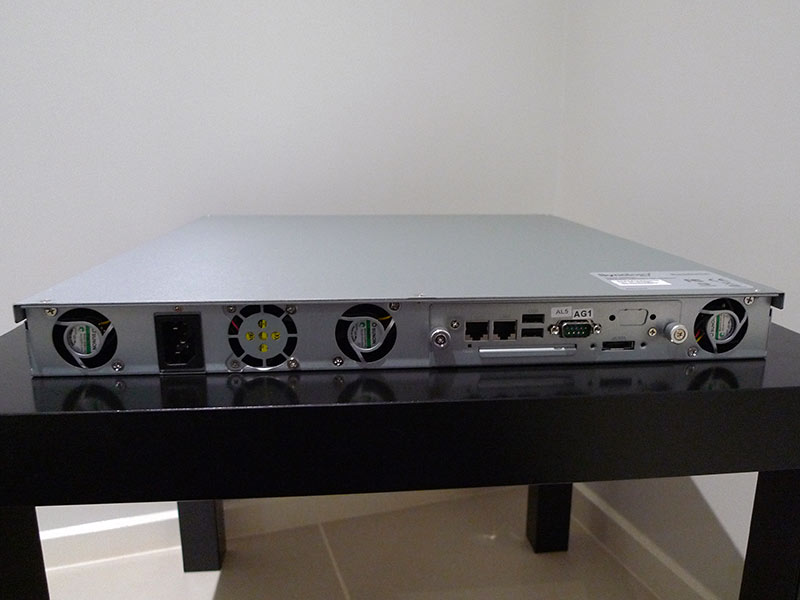 While the fans and power receptacle are laid out as the RS812+, the RX410 has only one eSATA connector to provide data connectivity.

Both units are quite heavy and if it is your first time handling rack mounted devices, you might be surprised at the weight. Even without drives, both the RS812+ and the RX410 weigh just a tad over 7kg.

Unlike the previously reviewed consumer grade DiskStation units, both the RS812+ and the RX410’s drive bay caddies had neither individual drive bay locks nor the new screwless drive fitting system of the DS1513+. 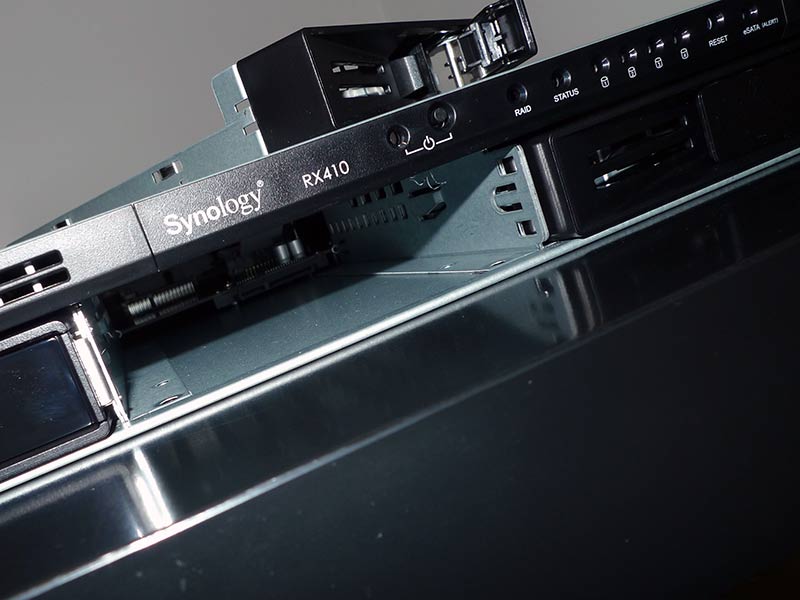 To give the units some real world testing, we screwed in two old 500GB Western Digital test hard drives into the RS812+ and one 500GB drive into the RX410 expansion unit.

While the hard drive installation was a cinch, of all things, we ran into a hitch fitting the units into our rack cabinet. To our surprise, both the RS812+ and the RX410 struggled to fit into our 600mm deep rack cabinet.

And here is where things get a little curious. While both the RS812+ and the RX410 actually fit in our rack’s standard 60mm deep rack slots, the design of the supplied power and eSATA cables increased the required depth by just enough to stop the units from fitting. To work around this problem, we removed the included cables and fitted two right angled power connectors along with a (less secure but smaller) generic eSATA cable. It wasn’t with plenty of room to spare, but with the changed cables, we could close the rear door and get both units to fit. Problem averted!

While we understand that these units were obviously designed for larger depth rack cabinets, we found it strange that Synology didn’t consider supplying (ever so slightly modified) cabling so as to provide compatibility with smaller racks straight out of the box.

In any case, with the units installed in our cabinet it was time to fire them up.

We ran the Synology Assistant from the disc included in the 812+ package on our MacBook Pro and were immediately prompted to install the DiskStation Manager software (DSM 4.2). While the whole process was easy enough, we did miss the DS1513+’s new online installation. 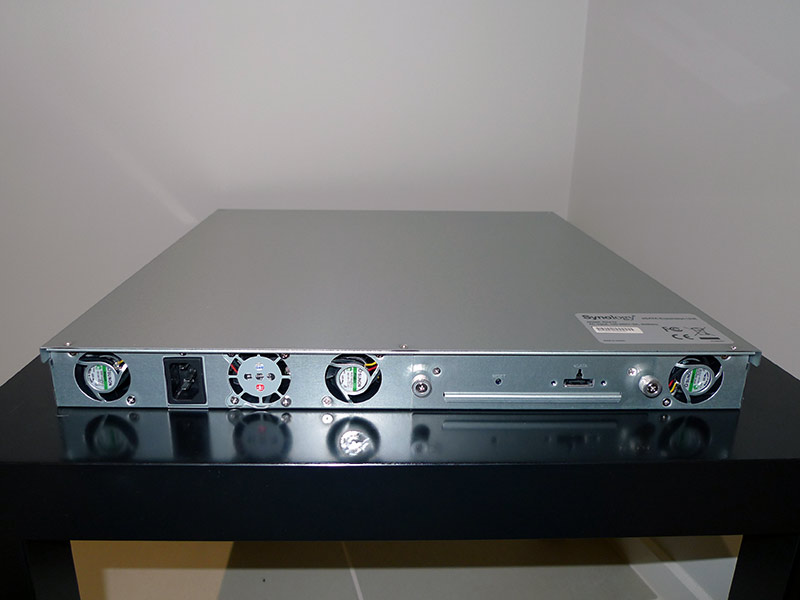 After about 6 mins, the DSM was installed and the Synology Assistant software prompted us to browse the DS1812+’s web interface.

The familiar DSM interface popped up in our browser and after logging in, quickly reminded us that the RackStation was now performing its obligatory initial parity consistency check of the volume in the background.

While we waited for the parity consistency check to finish, we located the RX10 Expansion unit via the DSM’s control panel under devices and printers.

The DSM software interface continues to essentially be an operating system within a web browser. While it is not a Windows or MacOS GUI, its look and feel is uncannily familiar. If you have delved into your computer’s Control Panel or System Preferences panes, you will feel comfortable using the polished DSM interface. 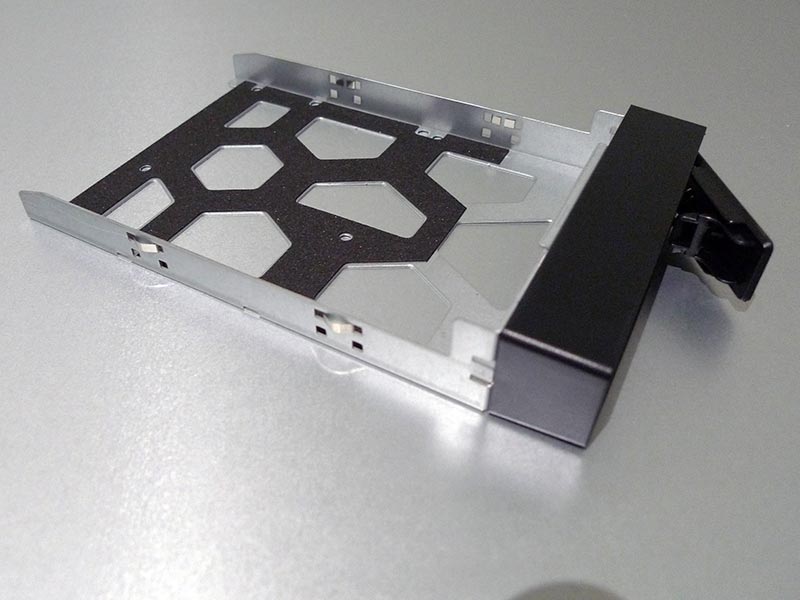 While Synology have recently launched version 4.3 of their DiskStation Manager, for a variety of reasons, we completed our testing of the RS812+ with DSM version 4.2. For the record, like all modern RackStation/DiskStation units, the RS812+ is fully capable of running the new DSM via a free download from the Synology website.

For commentary on the new DSM 4.3, lookout for our upcoming review of the RS214.

To create usable storage, we set the RS812+’s DSM to auto create a Synology Hybrid RAID (SHR). Cleverly, the unit automatically detected the drive in the RX410 and included it to create a combined three drive array. To provide speed tests from both units we decided to stop the process and instead create a a custom setup. To this end we created two SHRs (basic with no data protection) – one on the lone hard drive in the RX410 and another separate volume (also basic with no data protection) on the two drives in the RS812+ control unit. 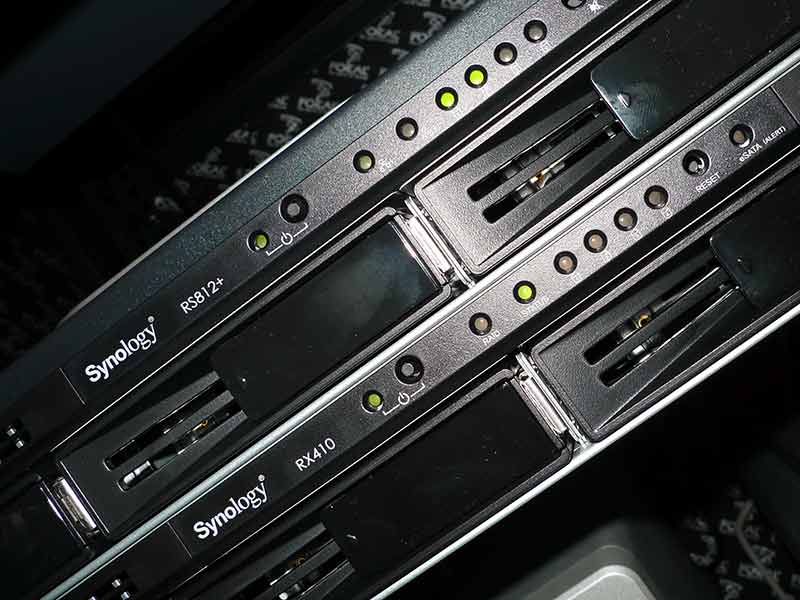 We also used version 10.3.3 of the AJA System Test Utility and all timing was measured manually via stopwatch.

Using two separate shares we created (one per device) we ran some transfer tests between the units and our Mac Mini and also between each other. 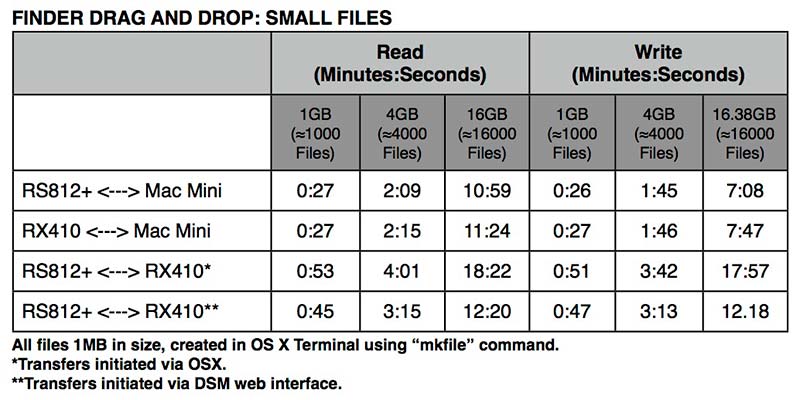 While our speed test results were slower than the previously reviewed DS1513+, the speeds were acceptable, if a little slower than expectations.

We were worried the RX410 may exhibit slower read/writes due to it having an additional eSATA hop but the results were pretty uniform across all tests. Also worth noting is that when copying data between the RS812+ and the RX410, we recorded improved transfer times when the transfer was initiated from the RS812+’s internal web interface. This wasn’t surprising as using the RS812+’s File Station essentially removes the overhead of using the Mac Mini go-between.

During our time with the two units, they worked flawlessly. Our only real complaints were that the RX410 was significantly louder than the RS812+ which was – considering its rack nature – relatively quiet and the general transfer speeds. 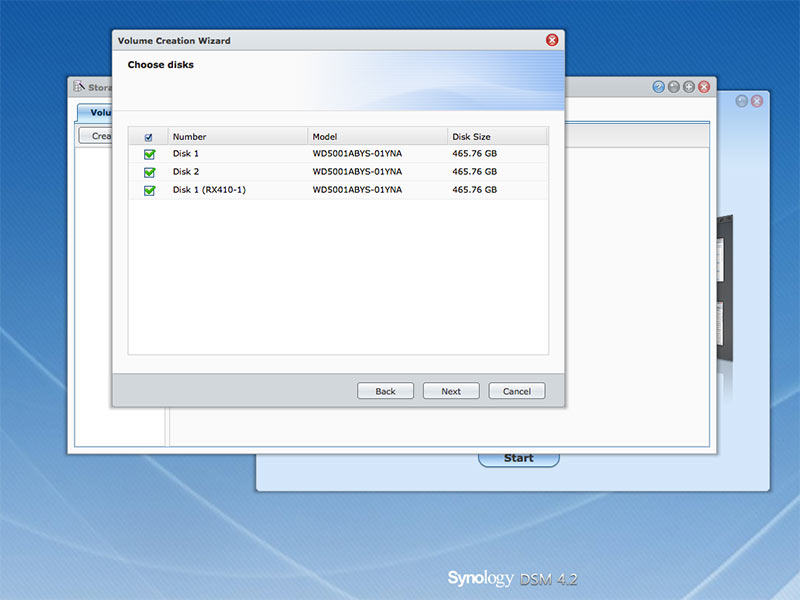 The DSM interface was a pleasure to navigate and as always was packed with a cornucopia of both standard and user installable packages. While we took a cursory glance at the packages – and all was good – we have decided to wait till our next Synology review to bring a more detailed look at the DSM features, specifically the recent upgraded DSM 4.3. 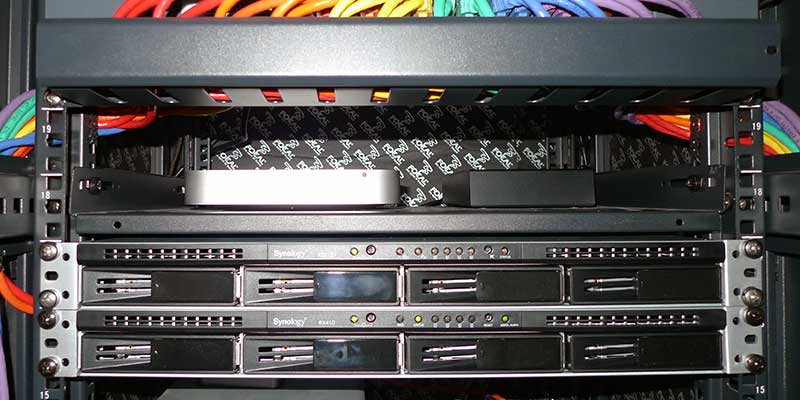 Overall, both the RS812+ and the RX410 maintained Synology’s record for rock solid operation and excellent build quality. Both the hardware and the included DSM software worked flawlessly. Transfer speeds were slower than the DS1513+ and the RX410 exhibited a noise level that was audibly louder than we would have liked. Other than that, the only real issue we had was the depth requirement caused by the bundled cabling.

While off-the-shelf replacement cables managed to alleviate the depth requirement issue, we think Synology would do well to consider bundling space saving cables to effectively cater to the 600mm rack cabinet set.

The DSM was as easy to use and rock solid as ever and our overall experience of both units was good.

Both the RS812+ and RX410 Expansion unit are available now and can be purchased from both Australian and worldwide computer hardware stores. Australian street prices for the RS812+ and the RX410 are around $1000AUD and $700AUD respectively.

For more information about both units and other Synology products, please visit Synology’s website.