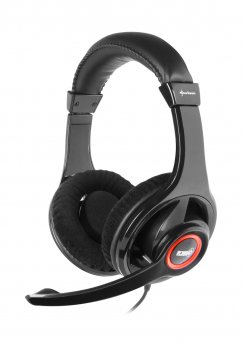 German hardware company Sharkoon has just released two new toys into the gaming fray: the RHS 100 and RHS 200 stereo headsets. One of these is looking to replace your sound card and both seek to rock your ears. How do they look so far?

The RHS100 headset is an over the head USB stereo headset designed to externalize your sound card into a USB device. The headset has its own on-board sound card, “replacing an absent or inferior soundcard” on either a laptop or desktop machine. Including a microphone, bass control, and volume control as well as sporting a two meter long cable, it sounds like the RHS 100 could be a bright orange beast. Mac and XP users beware, however, as the driver software requires Windows 7 to operate.

The RHS 200 is a smaller version of the RHS 100, featuring a behind the head design instead and forgoing the on-board sound card. Lacking some of the frills of the RHS 100, such as the built-in bass and volume control, the RHS 200 still sports a pivoting microphone and mute button and similar technical specs. Since it doesn’t require the same kind of hardware interaction, the RHS 200 connects via a 3.5mm audio jack instead of USB.

The RHS 100 and RHS 200 weigh in at an MSRP of 23.49 euros and 18.49 euros, respectively, and are available immediately from authorized retailers. For more information, photos, and technical specs, visit Sharkoon’s website.