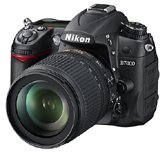 Well anyone would be forgiven for thinking Nikon had forgotten about the up and coming Photokina event scheduled for the 21st of this month in Cologne.

But that’s simply not the case, at least not after today’s press releases, Nikon has announced their new Mid-range Prosumer DSLR the D7000, which offers 16.2 Mpixel CMOS sensor in DX (or APS-C for the rest of us) format, as well as things like a 39 Point AF grid, and Nikons new EXPEED 2 image processor.

Nikon also announced their new SB-700 Speedlight, which is the first Nikon Speedlight below the SB-900 which has the ability to act as a master controller in a multiple-strobe setup.

And to top things off, Nikon has released their new AF-S NIKKOR 35mm f/1.4G , and a new AF-S NIKKOR 200mm f/2G ED VR II Primes, these are both nice fast lenses, and being primes should hold up excellent image quality.

Full spec sheets for the camera & speedlight after the break.