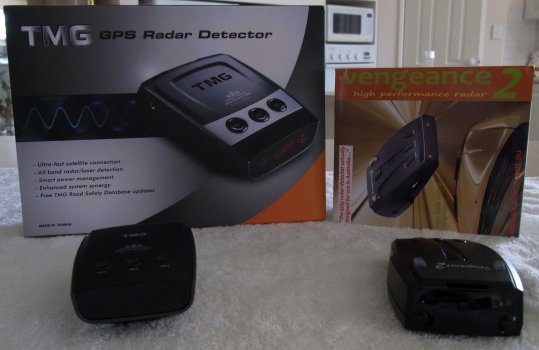 Look no further than the Vengeance 2 and the TMG GRL 300 Series radar/laser detectors that we are about to review courtesy of www.radars.com.au.

Already reputed as being a very high end radar/laser detector, and in fact, the only one designed with specific enhancements for Australia, the offer to review the Vengence2 has got us pretty excited.  But imagine how “spun out” we were when we were also offered the latest and greatest GPS based, TMG GRL series 309. This is one of the most innovative and sophisticated road safety monitoring systems in the world today and it is in the final testing adjustment phase for Australia as this goes to print.

It is so new in fact, that it is not yet been released for retail or named, but rumoured to be branded the “Road Eagle”.  If specs are anything to go by, this radar/laser detector will sweep world markets.  It has an inbuilt GPS that knows the speed limits etc of the roads you are on, it then integrates the information and alarms accordingly.  We could be “jumping the gun” but imagine how this will reduce all the “falses”.

We will be testing these two detectors side by side over a large diverse test base, for both city and country driving and we will offer pros and cons for each.  But one thing is for sure, no matter which part of the world you live in, one of these two babies should be all you need to drive safely on any of the roads today.