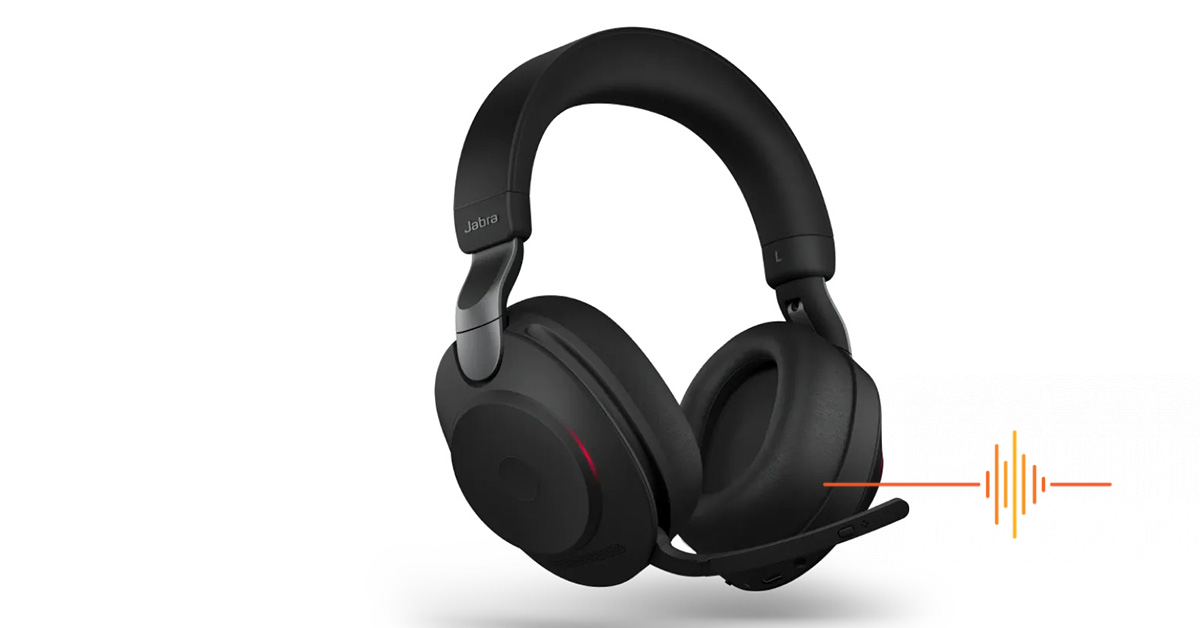 I have been pretty much been working from home for about 14 months, and naturally I have a heavy reliance on quality audio for my crazy levels of work calls. Additionally co-ordinating the new look DRN website involved long hours of collaboration and discussions with our webmaster Peter. It was the perfect time to test out the Jabra Evolve2 85 to see how it fares. 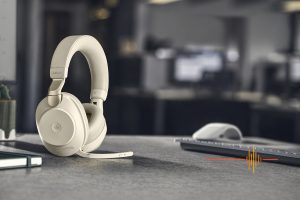 First Impressions
Ben has already tried out the Evolve2 40 and Evolve2 65 and is a big fan, and I have to agree with him. The construction of the Evolve2 85 is superb with high quality materials. The two large ear cups is padded with memory foam and finished with a soft leather like material that sits comfortably against your ears. Similarly the inside of the head band has the same soft materials so that it rest easy on the top of your head.

My review unit has matte black outer shell, and the adjustment arms are in a mute titanium, perfectly suited to a corporate environment. A number of buttons adorn both sides of the headset.

On the lower part of the left earbud is two gold pins for the optional charging stand. Still on the same side working from the bottom there is a 3.5mm audio port, USB-C charging port, a charging indicator light, power + Bluetooth toggle switch, and finally halfway up the ear cup is a button that allows switching between ANC, HearThrough and off for sound modes.

There are just three buttons on the right earcup – these are for controlling volume, next/previous track, and play/pause functions. The mic is retracted into the right ear cup when the unit is stowed away and calls are automatically muted. Lowering the mic boom unmutes calls and there is a 90 degrees twist to get the microphone into place.

In Use
Like all the Jabra products the team has reviewed in recent times, pairing the Evolve2 85 to the phone and my computers was simple. To put the unit into pairing mode for more connections, all you had to do was the hold the power button towards the on position for a few seconds until it confirms it is in pairing mode.

I did run into problems when the smartphone app Sound+ did not detect the headset even though it was solidly connected to my phone. Even power cycling the headset and toggling my phone Bluetooth didn’t fix the problem. I resorted to set it up again from scratch and this time it had no issues finding it in the app, although I found that it takes longer to do so than with the Elite 75t that I still use regularly.

There was already a firmware update waiting for me so I just went right ahead and updated the unit before using. There were certainly no shortage of calls to be on, whether it was Skype, Skype for Business, Microsoft Teams, Webex, Discord, Zoom. I tend to collect conference call software like they will let me redeem them for valuable prizes.

The first feature I really appreciate on the Evolve2 85 is the red “busy” indicator that is on both sides of the earcups. I sadly do not have the space for my own home office where I can close the door as needed, so this particular feature makes it easy for family to know I am unavailable. The caveat though, is that my toddler totally ignores it, and it does not work for people who starts talking to me before they come around the corner and see what is going on. Hardly a technical fault though.

Also important to me is Active Noise Cancellation as I have a very noisy toddler who has no hesitation in making herself heard. The Evolve2 85 delivers on the ANC as well as having excellent audio quality for listening to others.

The consensus on the audio quality was that it was quite good. There is a bit of compression when ANC was active, the sound was not as rich and rounded as other headsets I have used, but it was faithful in reproducing my voice that no one really bat an eyelid at it.

I am finalising this write up after receiving some particularly sad news and I need a little distraction while I push on. In between the memory foam of the earcups and ANC, I am as close to being able to block out the world as I can allow myself to be right at this moment. I find myself immerse in Axl Rose’s unique vocals as he blast out Knockin’ on Heaven’s Door and Sweet Child o’ Mine, as my my playlist cycles through tracks as a foil to my mood.

Battery Life
Jabra states that the Evolve2 85 have a 30 hours of talk time from fully charged. In the initial round of testing on the first set of firmware, the Sounds+ app indicated I had 74% battery life left after a 30 minutes call which was a bit higher drain than I was expecting.

Obviously having Active Noise Cancelling and the busylight feature turned on will impact on the battery life, bringing that talk time to 20 hours. It is rated for up to 37 hours music time with ANC off (and 32 hours with ANC on).

After a couple of firmware updates, the battery life has seen some improvements and I am more comfortable with the numbers Jabra quotes.

My review unit came with a charging stand which is handy, although you do have to pay some attention on docking when you put the headsets on as there is no guidance between the two to snap it into place. Look out for the charging light to confirm that contact has been made.

It takes 2.5 hours to fully charge the unit, or a 15 minutes quick charge for 8 hours of battery life.

Note that Jabra offers the Evolve2 85 both in a version bundled with the cradle and without. 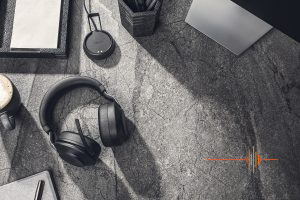 Other Features
The native Bluetooth connection has a good range, but using the provided Jabra Link 380 USB dongle will significantly improve the experience as it is designed to work with the headsets.

To really take advantage of all the features, you will need the Jabra Direct software which is available as a free download from the Jabra website. It gives you more options than the Sounds+ mobile app, as well as offer integration of your softphone and headset connectivity. It tells me what my headset is ready for at any moment, such as Microsoft Skype for Business and Teams.

I love the on-ear detection where the headset mutes and unmute calls, or pause and resume my music automatically.

The Evolve2 85 also comes with a hard shell carry case to protect it during transport. Inside there is even a small dedicated spot for the Link 380 USB dongle, and Jabra has thoughtfully sewn in a long tab that you can push in with the dongle to make it easier to pull it out later.

Gripes
When I was first trying out the Evolve2 85, I ran into a couple of issues that detracted from the experience. At the time I was a little disappointed considering how much the DRN team has loved the various Jabra devices previously reviewed, until I realised one of the issues is an operator error.

One of the features I was really keen on is the push boom to mute. No fumbling for buttons, no moving the mouse to find the on-screen mute button before my lightning fast toddler pulls at my arm. Unfortunately when the mic is switching modes, it completely cuts out audio for a second or two. I can’t hear anyone until the audio kicks back in.

The second issue, which turns out to be a non-issue was the swivelling of the boom mic. I pinch at the end of the mic to push it out of the way, and the mic picks up all the sounds associated with this action and on a few occasions had interrupted the conference call. That became a non-issue when I discovered the mute button on the boom and now I just press it as a I grab the mic to mute myself before pushing the arm out of the way. Even better because you can unmute yourself with the boom up and there are microphones built into the earcups! This does come with a trade off where the boom arm mics do not contribute to noise cancellation. 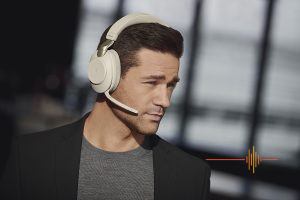 It is rare for me to form a negative opinion of a product at the beginning only to do a complete 180 by the time I finish testing and reviewing it. I had expectations of the Jabra Evolve2 85 that initially did not seem to have lived up to, only to find that I was the problem. With the exception of the audio cut out noted in the gripes section, the Evolve2 85 is supremely comfortable headset for both business and pleasure.

Before you commit, it is worth noting that the Jabra Evolve2 85 comes in both USB-A and USB-C variants (dongle), there is options for Microsoft Teams or Unified Communication, and a choice of black or beige. Available from Jabra at a RRP of AUD$550 for the bare headset, or AUD$610 with the charging stand, the Jabra Evolve2 85 requires a reasonably hefty outlay. However if you are anything like me and spends extended hours locked in conference calls and discussions, the comfortability and the sound quality certainly makes them worth consideration.

They are also available from Amazon which be comparable in price. Buying through Amazon helps DigitalReviews so we appreciate you considering making your purchase there.

DRN would like to thank Jabra for the on-going support. 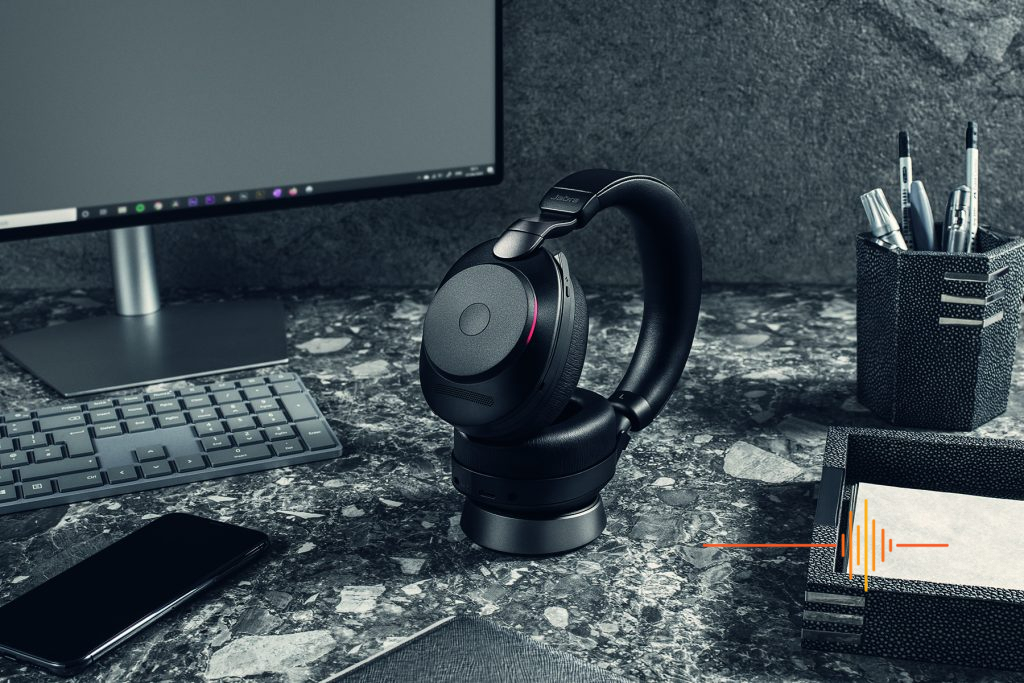