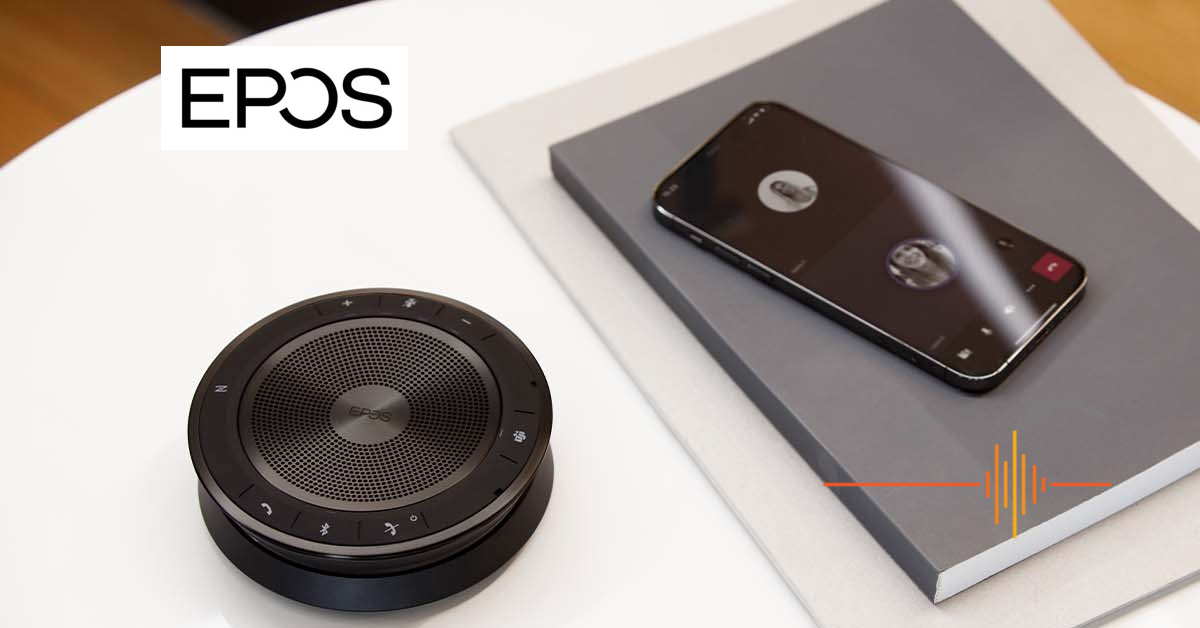 The EPOS EXPAND 40 Series was revealed at Enterprise Connect recently, and is the latest addition to the EPOS portfolio of Meeting Room Solutions.

DRN got our hands on the EXPAND 40+, a plug-and-play Bluetooth speakerphone designed for small-to-medium-sized meeting rooms. With thanks to EPOS, we set out to see what it can do. 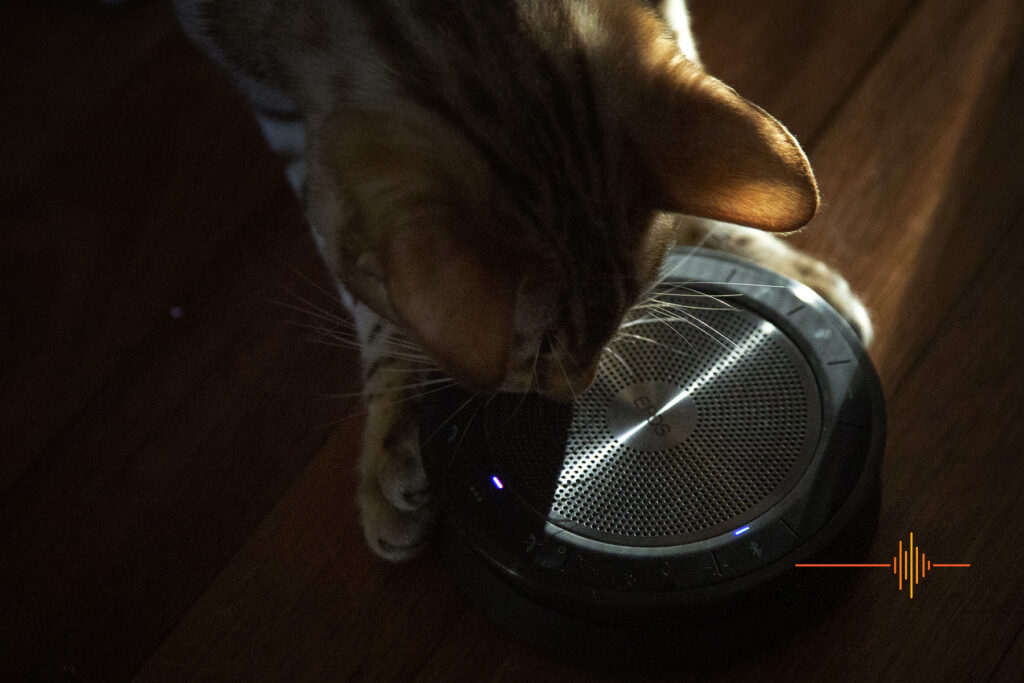 I have had the review unit sitting on my shelf for a few weeks while I wrestle my schedule into some semblance of order. Often the best testing I can do is a baptism of fire approach.

The EPOS EXPAND 40+ was taken out of the packaging a bare 25 minutes before an incredibly high stakes conference that I was party to. Within five minutes it was powered on, paired to my computer, and an echo call in Microsoft Teams performed to confirm that it was working. It was that straightforward to get myself up and running.

Stepping back for a minute, let’s look at the unit.

The EPOS EXPAND 40+ comes in a black neoprene pouch with the EPOS logo embossed on it. I was not paying a lot of attention when I unzipped it and was caught by surprise (still am sometimes) when the zip stops halfway. But that is more than enough to easily extract the speakerphone safely, rather than risk having it fall out uncontrollably. 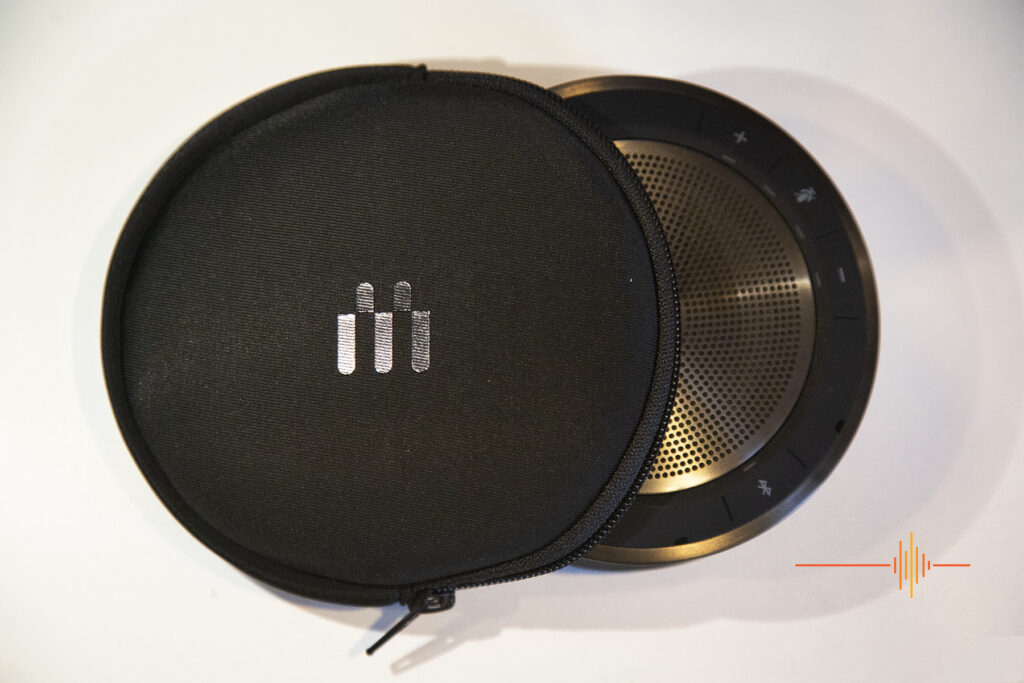 The unit measures about 12cm in diameter, made with a combination of metal and matte plastic. The top of the unit is dominated by the speaker grill, with various controls dotted around the rim. The outside of the buttons has around metal rim. Rather than a cylindrical shape going straight down, the EXPAND 40+ has a “waist” and a gloss black “belt” around the middle.

Perhaps saying the speaker grill dominates the top of the unit gives an overwhelming impression. The metal components have a dark titanium finish which exudes elegance. It is not distracting to look at and will slip into any setting unobtrusively.

Underneath the unit is built in cable management for the USB-C cable, as well as a recessed compartment for the Bluetooth dongle. The cable length is a generous 76cm which will give plenty of flexibility for positioning the speaker if it needs to be plugged in.

There is a surprising amount of heft in the unit at 314g, but that will mean it sits well on a table and not prone to get knocked accidentally. On the other hand, it is light enough to throw in a carry bag to take it anywhere.

As I mentioned before, the EXPAND 40+ was incredibly easy to get working.

If you choose the built-in Bluetooth option, you just pair the EXPAND 40+ like any other Bluetooth device.

That is. It is as simple as that. You can optionally download the EPOS Connect software to customise the sound and perform firmware updates, which is highly recommended.

EPOS provides a USB-C to USB-A adaptor for backwards compatibility. 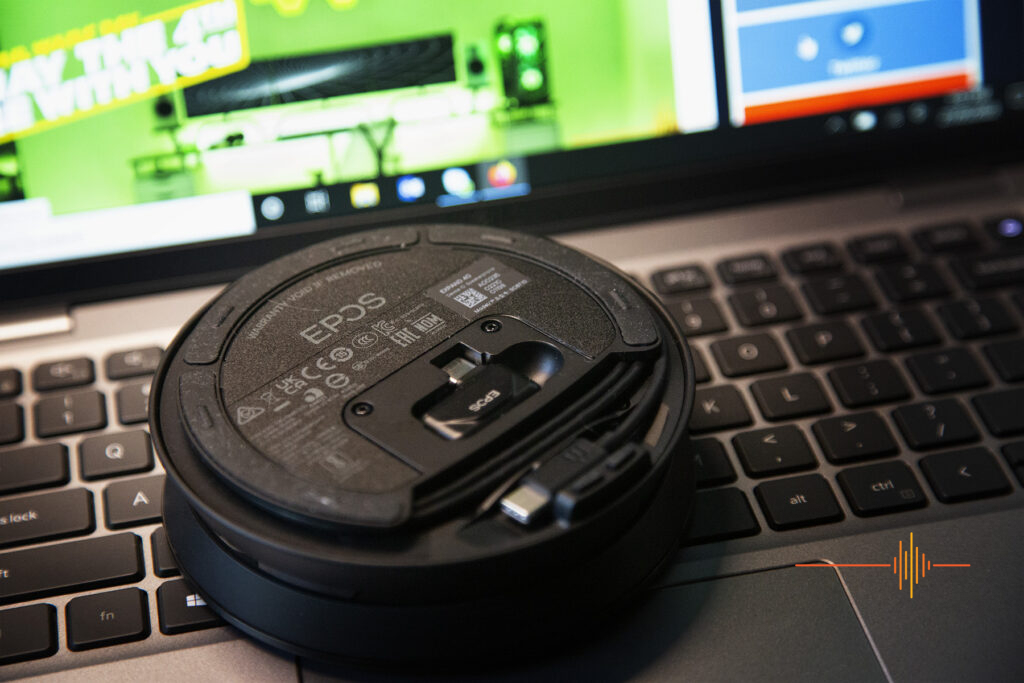 The EXPAND 40+ had a baptism of fire at DRN. My first time using the speakerphone was in a conference where it was critical that I hear every word, every nuance expressed verbally. It was just as important for the few words I spoke were clearly and accurately conveyed.

My test call was via Microsoft Teams. The first live fire was a WebEx meeting. I definitely was not let down in any way. I could clearly hear everything that I needed to, the sound was clear, balanced and all the inflection and nuances were carried through. Similarly what I had to say was delivered and there was no ambiguity to the intentions of my message.

Similarly when I had mental health check in via Zoom, the tone of my messages was just as important as the words I used. My allied health professional could get the full gamut of feedback despite the session being a remote one.

What is impressive is that the volume can be cranked up high while maintaining clarity of sound. Voices maintained their integrity and clarity even when I had the EXPAND 40+ near maximum volume.

Being a predominantly business tool though, means that the sound is tuned for human voice over music. You are not going to get perfect output for the full range of music reproduction, with a particular weakness in a bass line and tending to tininess in the treble. I pumped out a bit of BTS and Blackpink for Princess A to dance to and there was plenty of volume and minimal distortion. These tracks hardly push the limits of acoustics though. But if you are looking to throw on some music for after hours drinks and chillax, the EPOS EXPAND 40+ can at least provide nice inoffensive background tunes, personal tastes in music not withstanding.

The EXPAND 40+ only has seven buttons to control everything. As expected every button has multiple functions and it will take a little getting used to how to work it. The basics are clearly labelled – on-hook (which doubles as a power button), off-hook, Bluetooth, volume up and down, mute and a “Smart Button”.

For example the on-hook and off-hook buttons answers and terminate calls, but can also pick up second calls, merge and demerge calls depending how you operate it and your needs. EPOS has provided a handy video to walk through all the combinations.

There are LED indicators to clearly show the status of the device, in particular the volume has four LEDs to denote how loud or soft it is set to, and all of these turn red when the microphone is muted. It is easy to spot at a glance if you are on air or not. 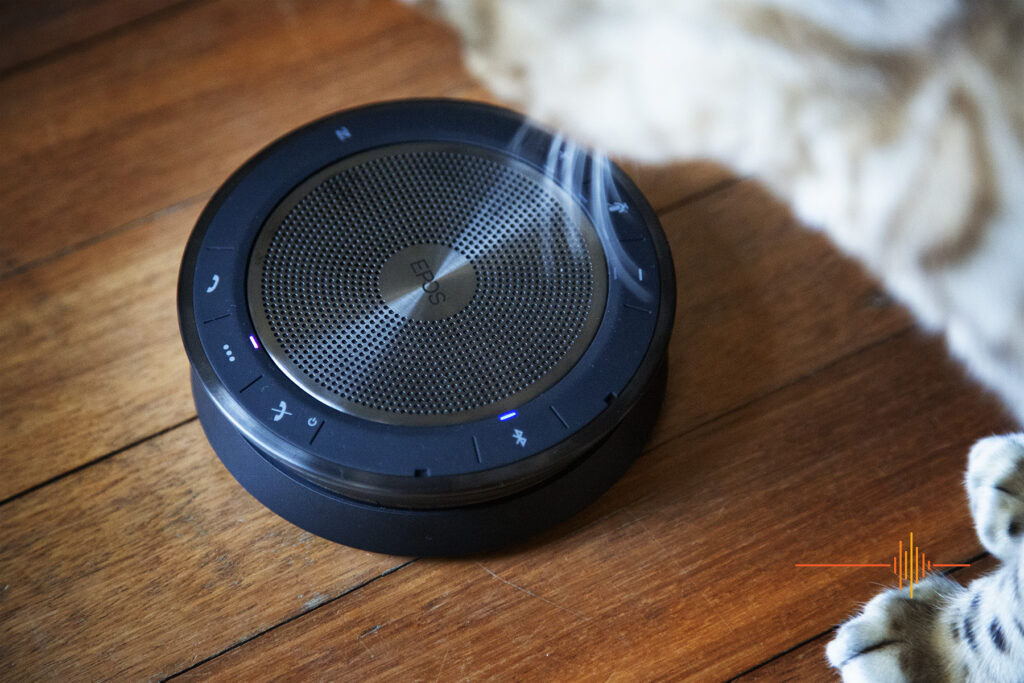 Whilst the EXPAND 40+ provides plenty of options for connectivity, what advantage does the BTD 800 give?

Aside from the BTD 800 being pre-paired in factory and ready to go, EPOS puts a disclaimer that without the BTS 800, the EXPAND 40+ may not work with all the call control capabilities.

Additionally the BTD 800 is tuned to provide the best connection with EPOS devices, including up to 25m Bluetooth range. 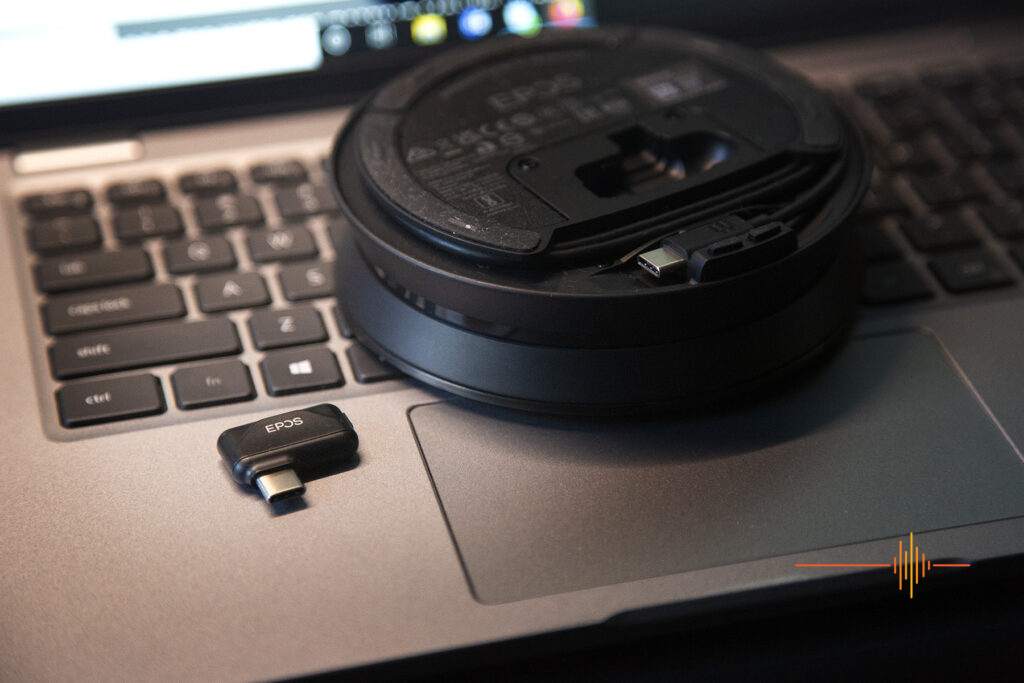 The EPOS EXPAND 40+ can operate in either personal or shared mode.

In Personal Mode, it can remember up to 8 Bluetooth pairings and will automatically attempt to connect to one of these.

In Shared Mode, pairing must be performed every time you’re connecting a device via Bluetooth. This prevents the EXPAND 40+ from automatically connecting to a different device than intended.

EPOS indicates the EXPAND 40+ can be fully charged in 3 hours to provide 18 hours talk time.

This gives plenty of air time even for the busiest schedules. If you run low on charge, you can continue either with the EXPAND 40+ connected to your computer, or a power brick. Both are convenient and does not interrupt your flow.

I have yet to drain the battery with my calls and tests, but 18 hours gives me plenty of buffer. 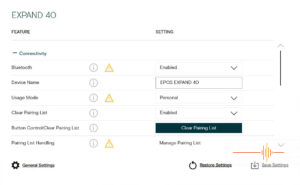 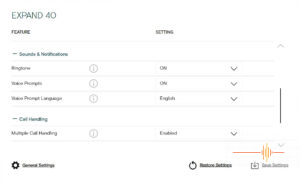 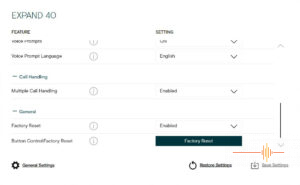 I was hugely impressed by the quality and ease of use of the EPOS EXPAND 40+. The voice reproduction served me well for what I needed it for.

The EPOS EXPAND 40 comes in three variants, the base EXPAND 40 (no BTD 800 dongle), the EXPAND 40+ (reviewed unit) and the EXPAND 40T (Microsoft Teams certified and has a dedicated Teams button).

For the based version EXPAND 40, the MSRP is AUD$485. The other two variants have a MSRP $569. Whilst the price is on the higher side, the quality is without doubt and also substantially cheaper than a dedicated room set up. Keeping in mind the post-COVID workspace, it is far cheaper and simpler to bring out an EXPAND 40+ and hold a meeting with up to 8 participants on your side.

DRN would like to thank EPOS for providing the review unit. 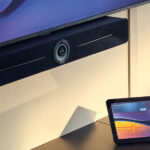