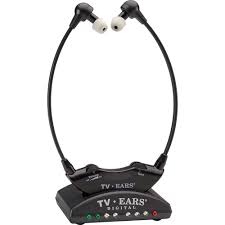 Sometimes you just want to be in your own personal space when you are watching TV and don’t want to disturb others who might want to sleep or are engaged in conversation.
At other times you may not be able to follow the dialogue on TV because of your hearing problems.

In both these cases TV Ears comes to the rescue with their latest implementation of a wireless system with voice clarifying circuitry.

We have put the TV Ears 5.0 Digital to the test over several months and these are the results.

Most people might associate TV Ears with those horrible antenna systems on top of TV sets from yesteryear.

The TV Ears we are talking about here is a wireless TV listening device that has been on the market for over 15 years. This latest model is a further improvement of the earlier technology that has been quite effective in helping people to listen to TV where they have a hearing impairment of some sort.

My case in point: because of my early years as a flight instructor flying in noisy cockpits without headsets or ear protection, has caused some hearing loss for the higher frequencies. Sometimes I have trouble following movie dialogues on the telly. Even turning up the volume does not really help in those cases and it might bother other people.
What I need is a system that delivers clear audio and where I can be turning up the volume even though the TV is muted.

The TV Ears is such a system that will transmit audio over Infrared LEDs with individual volume and tone controls. The outstanding feature of the Digital 5.0 line of models is the Voice Clarifying Circuitry which makes listening to dialogues an amazingly clear experience even at lower volumes.

Connections
Setup is fairly simple: plug the unit in somewhere near the TV in direct line of sight with where you will be sitting. Coverage area is about 1000 square feet which means any large lounge room will easily be covered. It has to be line of sight but it works with quite a large angle so basically anywhere in the lounge where you can see the TV screen properly will be covered by the TV Ears.

It should work with most televisions and our Samsung Series 6 smart TV was no exception.
The system comes complete with a number of connectivity options.
We chose the Optical Digital Audio Cord as being the best connection. There is also an RCA analogue and a 3.5 mm Analogue Audio Cord for older equipment.

In our experience the headset will last a good evening’s viewing: about 5 to 6 hours.
The rechargeable batteries in the headset should last between one or two years.
I could not find the specifications for these batteries but most likely, judging from the pictures, these can only be obtained from the TV Ears company itself. 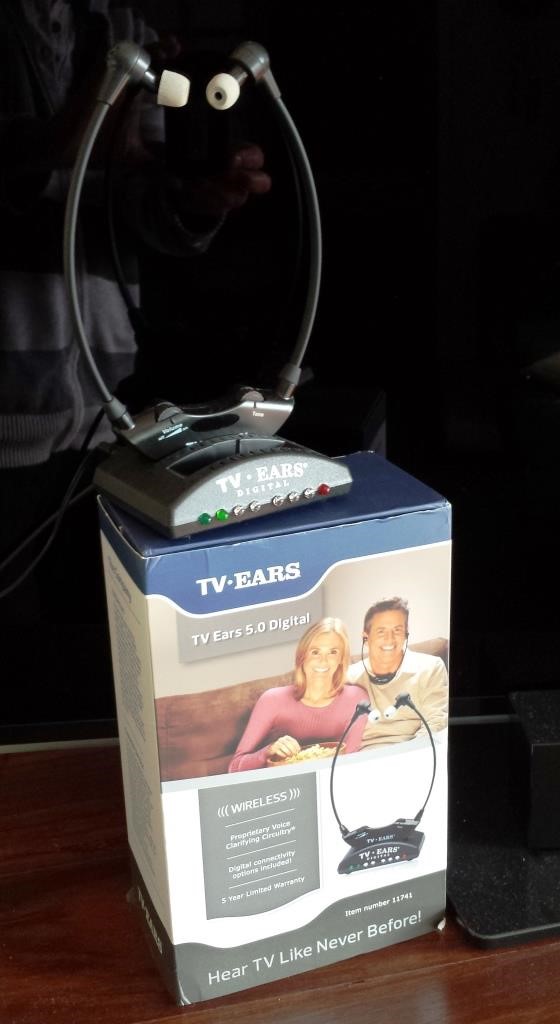 Improvements
Even though this model would have been the 5th implementation in this series the unit shows its heritage a bit. That means it looks a little bit dated even down to the lettering on the receiver. I think it can do with a more modern look but I suppose that doesn’t matter if you’re pitching to an older audience….

Initially the headset will clamp quite forcefully on your ears. This can be quite uncomfortable. There are some ways to stretch the arms but I think this issue needs to be addressed in the factory.

Another improvement which bypasses this last point altogether is to have a wireless speaker so that you can listen together to improved audio quality right where you are sitting. Fortunately, the company offers just that solution as a $200 option. We would like to test this in a further review as it might well be the best solution for most people. Stay tuned.

Conclusion
The initial experience when you plug in the system was similar to when I first started to wear glasses for long distance vision as a teenager. I had not realised that everything could look so clear!
I am far from having to wear any hearing aids fortunately. But TV shows with a lot of dialogue suddenly have become much easier to follow.
The added benefit is also of that you can watch a bit of TV and not disturb a sleeping partner or anyone else in the room.

The TV Ears Digital 5.0 line-up of products will be available in Australia in a couple of months. The unit as reviewed costs USD230 in the USA.