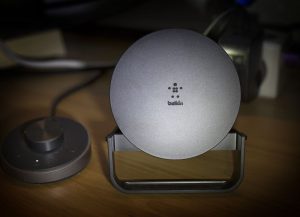 Belkin needs no introduction, they have been a main stayer in the accessories space since the crack of dawn it feels like. They recently got a nod from Apple for their iPhone 12 optimised mobile accessories, but the world does not revolve around Apple and new Magsafe, so there is the Belkin Wireless Charging Stand 10W + Speaker for the rest of us.

This one also goes by Belkin BOOST↑CHARGE Charge 10W Wireless Charging Stand + Speaker. A huge mouthful to say it is a phone stand, that is Qi compatible, charges your phone at 10W wirelessly, with a Bluetooth speaker built-in. 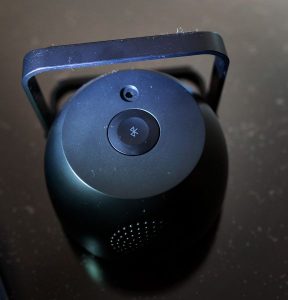 First Impressions
I hate to start off with a negative but here we are in 2020, I am holding a consumer electronic device that has a male DC power connector. I know, cost savings but what about micro-USB at the very least?

Moving on, the Charging Stand is a compact unit with some nice design features. So it was good to see not all logical thinking went out the window. There is a little trough at the front to rest the bottom of your phone on. Whether your phone is holstered with a case or naked, a small strip of rubber at the bottom of the trough will help keep it from slipping.

The opening is sufficiently wide enough to cater for the largest device I currently have on hand – the Nexus 6 – with room to spare. There is a slight tilt back which makes the screen viewable at a comfortable level.

The speaker grill is top mounted and it is behind where the phone rests to charge. 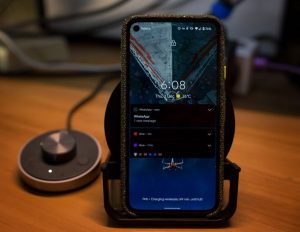 In Use
Pairing the Charging Stand is as simple as pressing the one and only button on the device. It is large, with a Bluetooth symbol on it and unmissable. Hold it down for a couple of seconds and it will go into pairing mode. The rest of it is done on your phone like you would with any other Bluetooth device. Once it has been paired though, it is just a tap on the button to reconnect.

I had a line up of working phones on my desk – Pixel 5, Nokia 8.3 5G, Pixel 4XL, Nokia 3.4, Pixel 2XL, Pixel and Nexus 5X. None of them had any issues connecting to the Charging Stand. I did find that the devices will not automatically reconnect after it loses the connection. It is not a bad thing because I set my phone to see the Belkin Speaker as a trusted device. It saves me from having to unlock the phone via PIN as the fingerprint reader is blocked when the phone is being charged.

With the Google OEM case with my Nexus 5, and there is no issues charging it right through the case. Charging starts immediately when the phone is on the stand, and due to the angle, you can easily hold a video call whilst it is in the cradle. The good part is, you can charge the phone in both portrait and landscape orientation. The frame of the cradle has this little support to keep the phone at the right height for this to happen.

Charging is rated up to 10W. For my Pixel 5, it went from around 67% to 95% within half hour or so. Right now it is on 96% and claiming it will be 16 minutes until full. Note that Belkin states this will work with up to 3mm thickness on a non-metallic case.

There is two tiny indicator lights on either side of the speaker grill – one to indicate power on / Bluetooth connection established, the other is for if it is wirelessly charging your device. 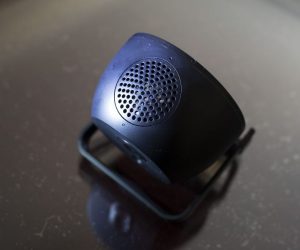 The Speaker
I ended up being on the phone quite a few times while I had the phone on charge, and despite having the speaker behind the phone, the sound was clear and the other parties had no problems hearing me.

At night when I am relaxing or tapping out a review with random music to set the mood, the Belkin makes for a reasonable performer. Let’s call a spade a spade, if you are an audiophile looking for the best possible sound then move along. I threw my usual gauntlet of mishmash and put the unit through it’s paces, the short summary is that it is more pedestrian than exciting. Vocals are clear and crisp, the mids and high are well rendered but a little one-dimensional. Bass is definitely a weak point without a doubt.

It is better than I had expected, but I am under no illusion of using it to replace my headphones as my primary audio output device any time. 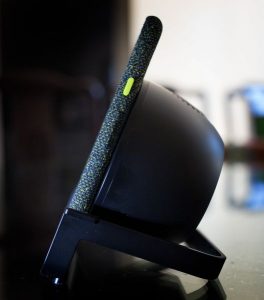 Gripes
The lack of USB port for powering the device is disappointing for 2020. At the very least I had expected a micro-USB over the preferred USB-C, instead I am losing a precious GPO and have to keep track of a dedicated AC adapter.

The notification sounds is surprisingly loud and there does not seem to be any way to turn it down. I constantly worry if it would be loud enough to wake up my toddler.

Charging is not quite set and forget. On a number of occasions I have had to realign the device to ensure it was actually charging, or charging optimally. (Guess MagSafe’s got the edge on this one.) 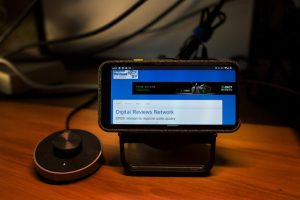 Conclusions
Despite some gripes, the Belkin Wireless Charging Stand 10W + Power is an excellent desktop accessory. The design is simple but thoughtful. It charges my phone at rest and the viewing angle is good. When I don’t feel like putting headsets on for music, this will work just fine. And if I want a bit of music in the kitchen or dining room, it is immensely portable and no configuration is required.

The Belkin BoostUp Charge 10W Wireless Charging Stand + Speaker has a RRP of AUD$99.95, but you can find it cheaper on Amazon. Buying through Amazon helps DigitalReviews so we appreciate you considering making your purchase there. This would make for a good Christmas stocking filler.