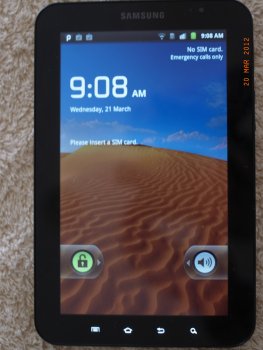 Well, we considered that we picked a good tablet last time, so let’s see how we fare with the Samsung Galaxy GT P1000N 16GB Next G and Wi Fi.

Once again, not Ice Cream Sandwich, but this one is a bit more suited to the “fairer sex” for hand span size. We deliberately went for the 7” because it is slightly narrower against the 7.7”and we believe that these two tablets will cater nicely for male or female alike. 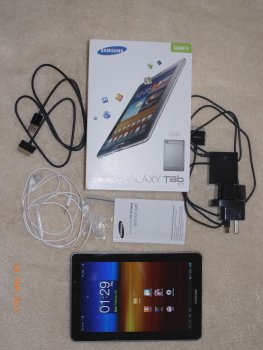 Among the huge number of tablets (all brands and types) available at the online store of www.electronicbazaar.com.au, we found this one. We did really want the Galaxy Tab 2, 7” (with Ice Cream Sandwich operating system) or the Samsung Galaxy 7” Plus, but they were unable to supply either.

Incidentally, we have now tried 34 different on-line stores and only four had a telephone number to call and this company was one who answered promptly. (Something to remember when outlaying the $ and taking the risk with online ordering.) If something goes wrong, at least you can call them. Coming back to the Samsung Galaxy P1000 7”, it is cheaper than the 7.7 and incorporating Next G as well is certainly a great bonus. It has the dimensions we want for this comparative review so let’s go.

What’s in the box?
Included as well as the Samsung Galaxy P1000 7” tablet unit we also received: 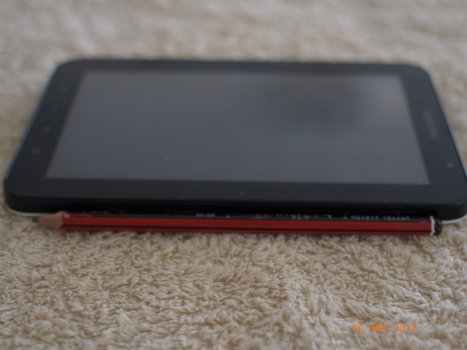 Operation
Having previously utilised the 7.7” tablet with the faster CPU and more RAM, we must not make any presumptuous predictions either way and do some objective tests to see whether these slightly slower speeds and memory make a difference in the type of functions you would use constantly. It’s all about “fit for purpose”. At the end of the day, it could be a bit like a car with 2000 HP – it won’t necessarily drive the 100 metres to church any better than if it had a far smaller engine in it.

As the specifications show, it has less RAM and a slower CPU. We must admit though, we did not notice any slowdown in performance. We noted that the P1000N had Android version VFJP6 which is a Gingerbread Operating system, although we suspect that it came out with 2.2 Android (Froyo) originally. It was noticeably different in the operation of menu systems compared to the 3.2 Honeycomb 7.7”. Not dissimilar in its approach to accomplish operations, but a little more disjointed than the 7.7” Honeycomb in getting the end result. We found the Honeycomb operating system to be an improvement and to be more logical in its functionality. (Although this could be the result of us learning the Honeycomb operating system first and not the other way around). The weight of the GT P1000N comes in at 385 grams whereas the 7.7” was 335 grams.

What we especially liked:

Indeed pretty much all of the features we remarked on as “must haves” were there although you had to tread different paths to get them. 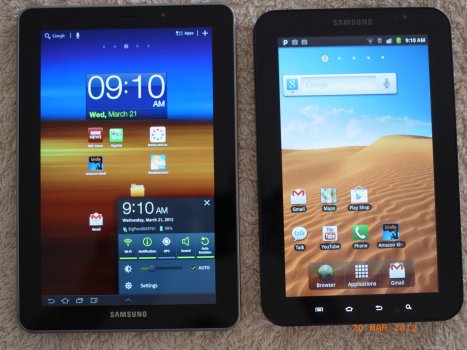 Conclusion
In terms of finding what we believe to be the best His and Her tablets, we believe that this is not the product we were hoping for and still expect the Samsung Galaxy Plus 7” or 7” Tab 2 to be the winner for the ladies but, at the time of going to print the P1000 was priced considerably less than the P6810 Samsung Galaxy Tablet 7.7” and so this fact must be borne in mind. As it is all about get what you pay for, I don’t mean poor in terms of quality as the Samsung Galaxy P1000N is still of good standard. It is simply that it is older in terms of screen technology, power and operating system enhancements. What is there works satisfactorily, but can you upgrade the operating system any higher?

At retail value of $449 at Electronic Bazaar online, the Samsung Galaxy P1000N appears to be a reasonable purchase when being compared to the higher cost of the 7.7” tablet. But if you are comparing to the Samsung Galaxy 7” Plus which we wish to review next, it may well be a different story as both are about the same price.

Not yet reviewed but on “we would like to do list” the P6200 Samsung Galaxy Tablet 7” Plus, appears to be far more capable and technologically advanced (according to its specifications as some are the same as the 7.7” P6810) so we are pretty sure that it may prove to be the better valued product, so stay tuned!