ImprovElectronics Returns to Save the Day — Boogie Board Sync 9.7 Reviewed 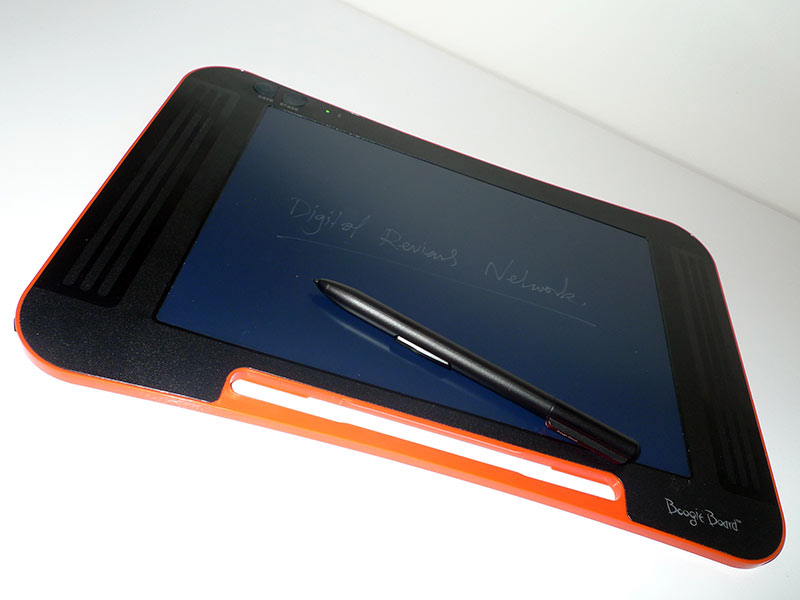 In 2010 we reviewed ImprovElectronics’ original Boogie Board and while we liked it, it was what the Boogie Board promised for the future that really excited us. With the advent of the Boogie Board Sync 9.7 that future we pined for is finally here.

In the four years since we last looked at a Boogie Board, ImprovElectronics have released a number of Boogie Boards, each slowly edging their way towards the functionality and design of the new Boogie Board Sync 9.7. 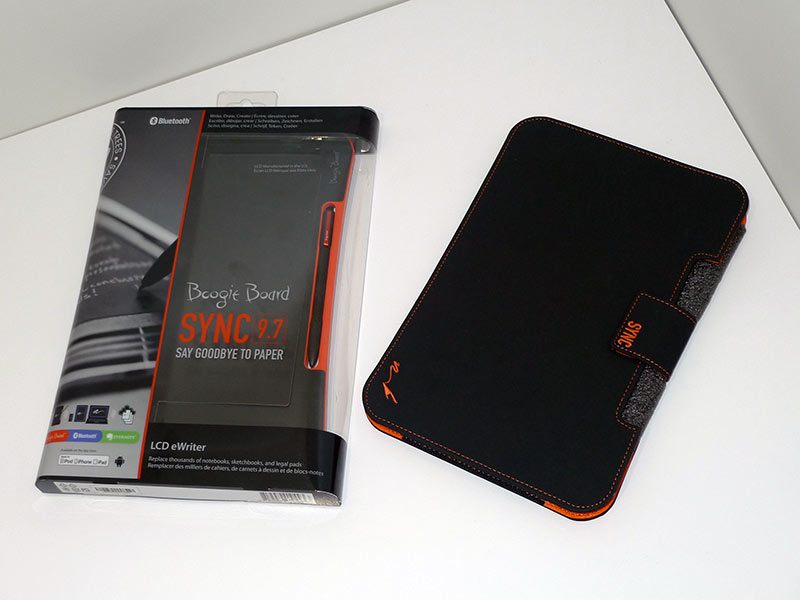 The Sync 9.7 is predominately comprised of a black plastic body which is finished in a combination of shiny smooth and rough matte finishes. This dual texture finish makes it feel secure in the hand and gives it a classy look. Contrasting this dark palette is a chic deep orange trim.

Along with the unit itself, the BoogieBoard Sync 9.7 comes with a dockable stylus, a short USB charging cable and some brief instructions which are cleverly part of its packaging. 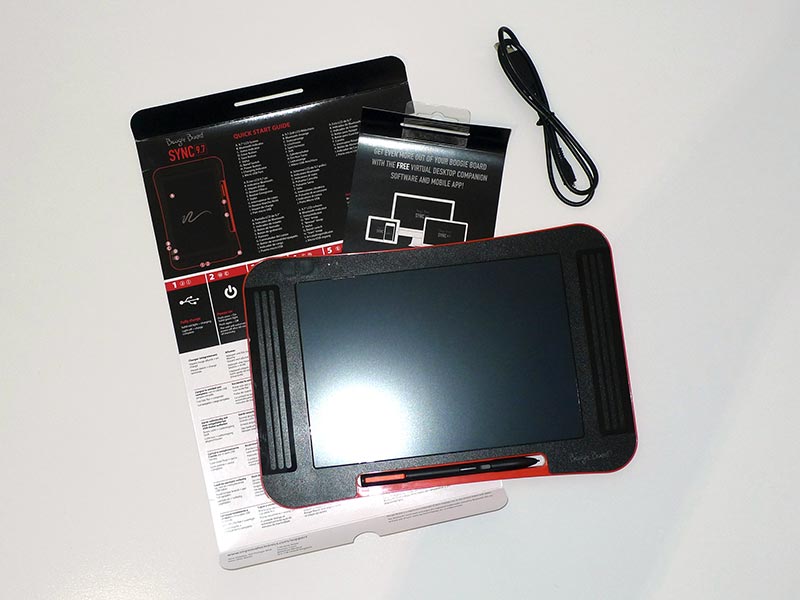 The Sync 9.7’s is a rectangular shape measuring roughly 283mm x 180mm with its longer sides being slightly concave. The Sync 9.7 is 5mm thick without the stylus docked and despite its size and shape, is fairly rigid both when being handled and when being scribed on. The included stylus is also comfortable in hand and can be docked to the Sync in a dedicated slot. When docked, the stylus adds a few millimetres to the Sync’s overall thickness and sits securely during transport.

The front face of the Sync 9.7 is predictably dominated by the writing area which is 140 x 202mm in size or 9.7″ (246mm) diagonally. The writing surface is a dull black and is very reminiscent of an LCD screen displaying an all black image. To the top left of the writing surface are two rubber buttons – a convex save button and a concave erase button. Next to these buttons are two diodes, one for power and another to indicate bluetooth activity. Beneath the writing area is a centrally located stylus dock. Both the dock and edge are bathed in deep orange, giving the Sync 9.7 a bright and stylish appearance. 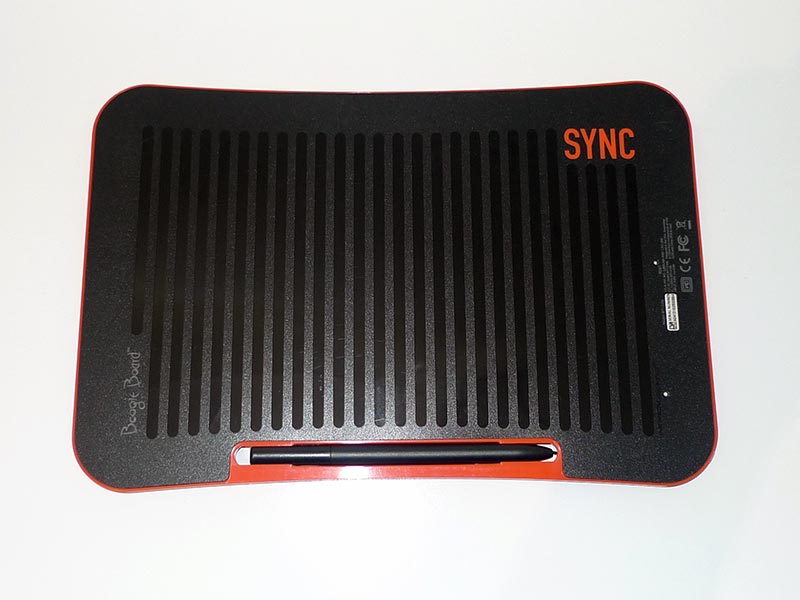 Surrounding the writing area is the same the dual texture plastic which gives the unit its non slip feel. Beyond some branding, the rear of the unit features two pen hole buttons – one unlabelled and another marked “reset.”

The thin orange edge is unremarkable other than it contains a micro USB port located next to a small charging LED on one of the shorter sides. A small silver power button is also present on an adjoining corner. 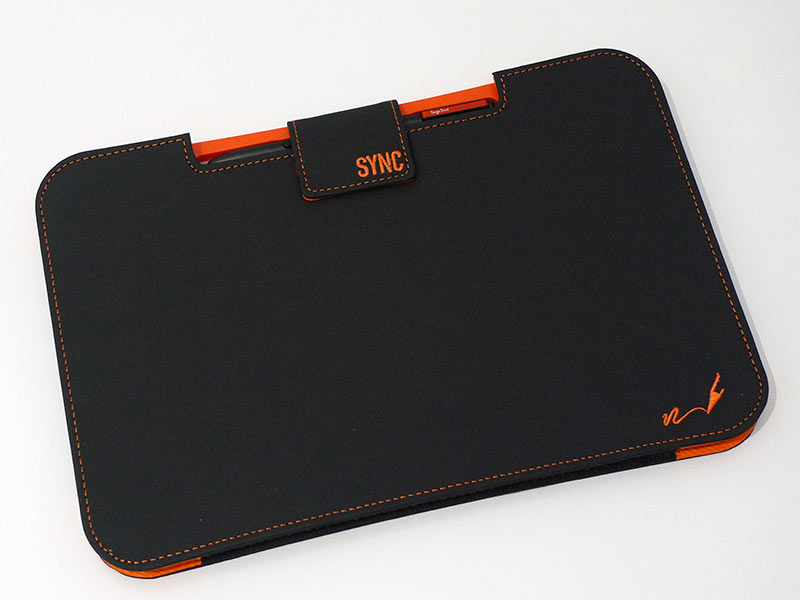 Along with the Sync 9.7, ImprovElectronics also sent us a folio case to evaluate. Predictably, the folio fits the Sync 9.7 perfectly and as the images show, its matching dark grey/black and deep orange stitching/interior perfectly complement the BoogieBoard Sync 9.7.

Overall, both the Folio and the Sync 9.7 look and feel great.

After a few minor issues (which were resolved through a firmware update), we began using the Sync 9.7 as our primary note taker in meetings and as a general scratch pad – We even used it to jot down the odd note for this very review!

Unlike the original Boogie Board, the Sync 9.7 has been designed to be used with the included stylus only. We did find that the Sync will still form an image when a finger nail (or other random pen like object) is applied, but nothing works nearly as well as the included stylus. This new “sylus only” design has pretty much eradicated trace images created by errant palms while writing. In fact, even purposefully rubbing your palm or finger (not the nail) over the writing surface leaves the image clean and unblemished.

The included Stylus allows for the scribing of sharp images and proving the Sync 9.7 capable of being used to create fairly intricate line drawings. The image on the Sync 9.7 is somewhat dimmer than the original Boogie Board which is partly due to the reduced line thickness and increased sharpness. This reduced brightness makes viewing images at some angles difficult but we found that when the Sync 9.7 was used in a typical scribing position, its writing surface/screen was adequately viewable in well lit rooms.

Actual scribing was effortless and while it initially feels different to using pen and paper, it isn’t something that takes any real effort to adjust to: It’s a bit like getting used to scribing with a new pen – It’s initially very different but after a few sentences, it feels much the same. 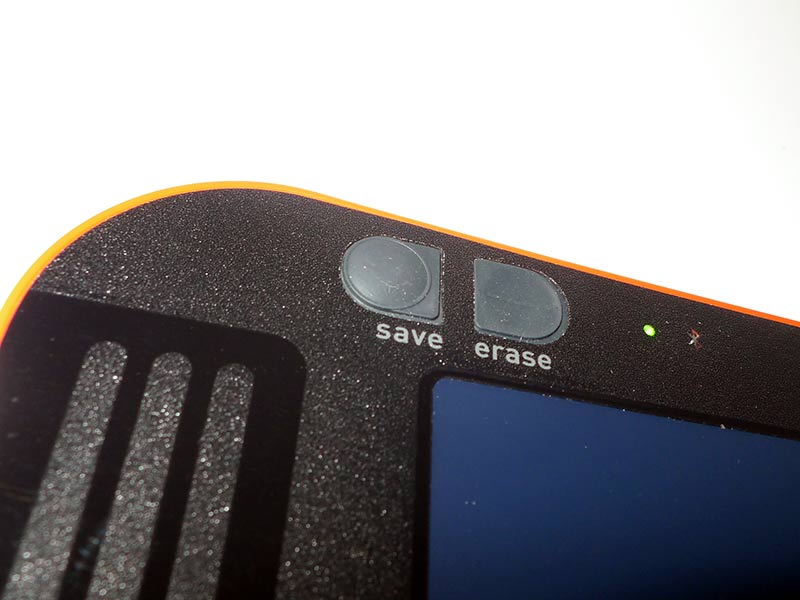 And saving images is quite literally as easy as pressing the save button. Once turned on, whatever image is drawn on the writing surface can either be saved or erased by pressing the corresponding button at the top left of the unit. Interestingly, the Sync 9.7 actually saves the “erased” images in a special “erased” folder, just in case. This folder (and a similar folder containing saved images), can be accessed once the unit is plugged in to a computer via USB where it acts like a regular (2GB) flash drive. The Sync 9.7 saves images as PDFs with a 395×574 resolution and are typically less than 300kb in size, depending on the complexity of the image.

You can also browse the Sync 9.7’s internal memory via Bluetooth but we found this to be only reliable when using the dedicated Sync software (more on this later). When using the native OS X Bluetooth file browser, we found the whole affair rather flakey. 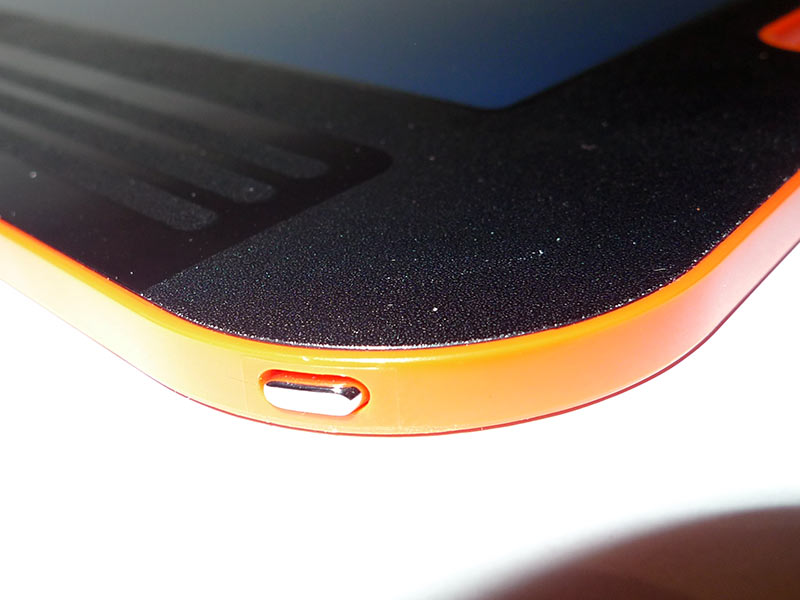 We have had the Boogie Board Sync 9.7 in our posession for a number of months and while we connected it to a charger from time to time, we never noticed any actual need to do so. ImprovElectronics claims the Sync 9.7 can stay in sleep mode for up to 100 days and based on our experience, and be used for around a week before recharging. From out experience, we have no reason to doubt these claims.

Other than some Bluetooth file browsing problems, the only real gotchya was that the Sync 9.7 can only save images that have been created while the unit is turned on. As images can be drawn (and retained) on the Sync 9.7’s writing surface without the use of power, we errantly thought we could employ the battery saving technique of only turning on the unit to save/erase. Unfortunately, this does not work. While you can draw on the Sync 9.7 without power, anything drawn in this state can not be saved: To save images, they must be drawn while the unit is on. Thankfully, we figured this out relatively early on and besides, after extended use we found that the purposeful conservation of battery charge was largely unnecessary. 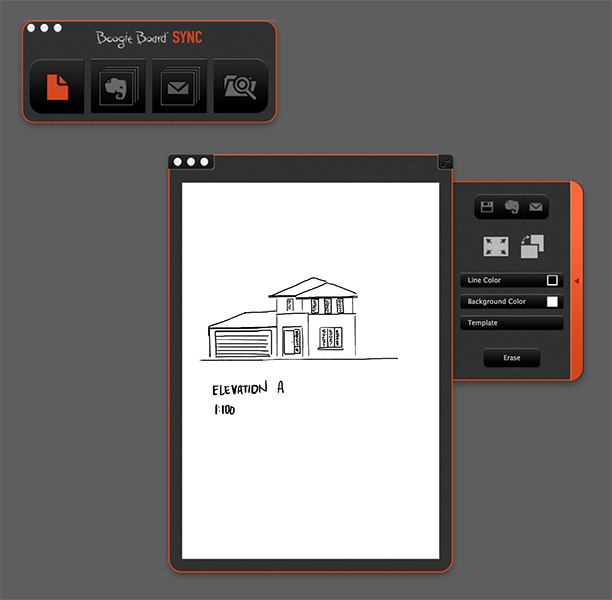 As previously mentioned, the Sync 9.7 is able to connect via both Bluetooth and USB to your computer. Both Macs and PCs are supported as are iOS and Android mobile devices, via ImprovElectronic’s Sync Mobile app.

On OS X, the Sync Virtual Desktop Companion software for Mac is a free and relatively svelte download at only 8.7MB. We found the software did what it says on the tin but felt rather rudimentary. While the software worked, it was a little clunky to use and ImprovElectronics would do well to consider giving it a design tweak in a future iteration. 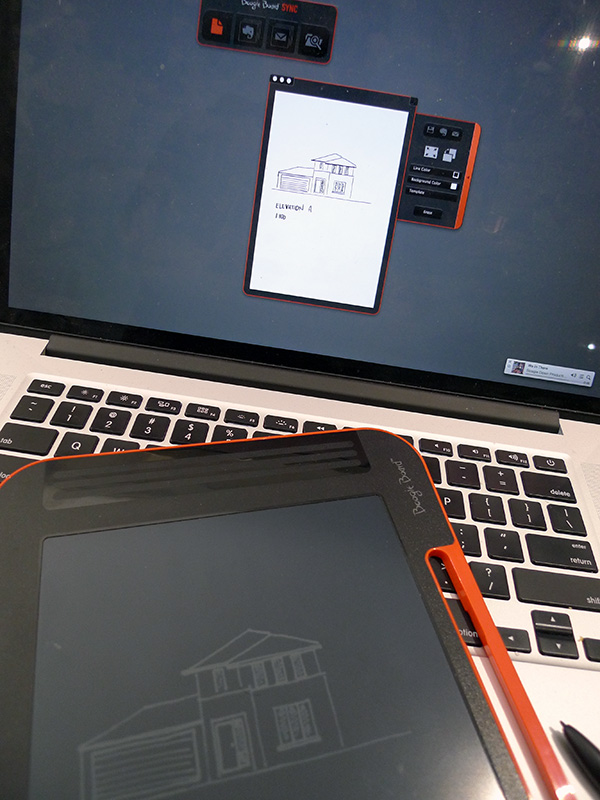 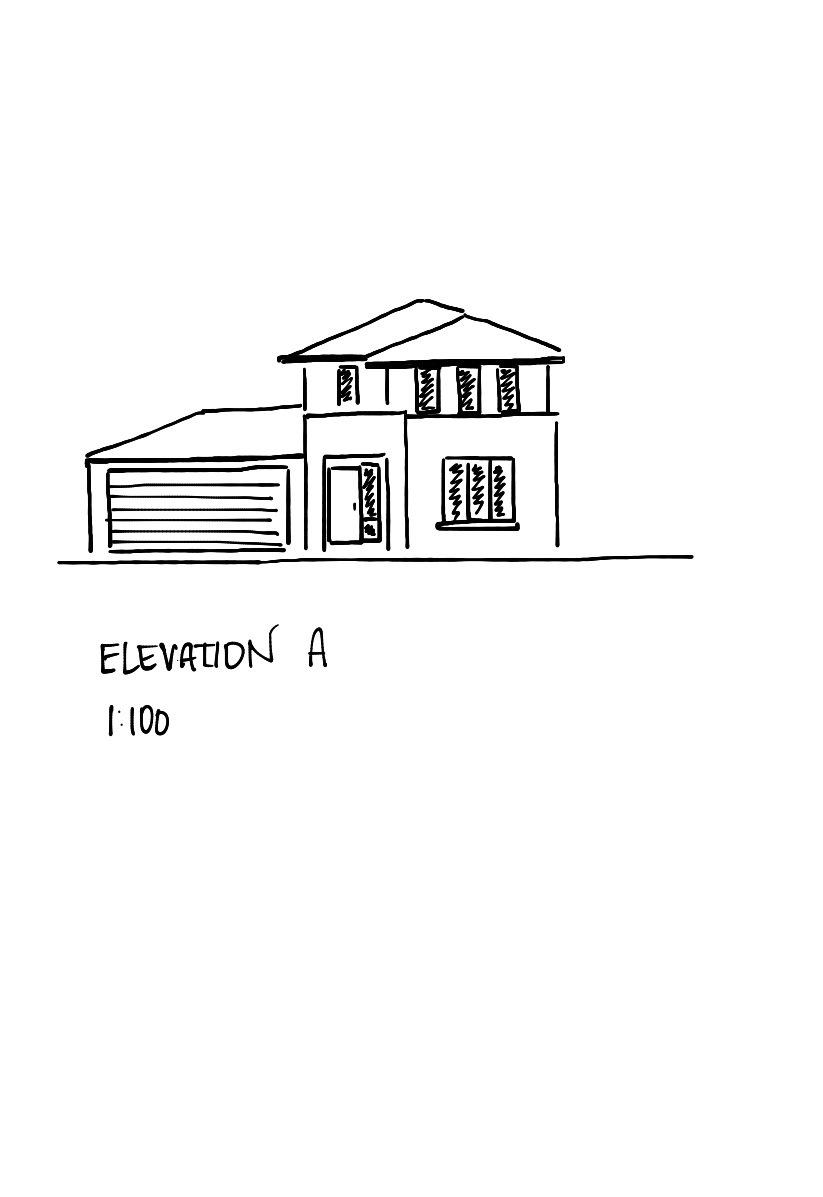 The software can also automatically “sync” images from the Sync 9.7 to a computer (or mobile device) and can quick send a selected image to selected email clients or sharing to Evernote.

One of coolest features the Sync software does is to wierlessly view what is on the Boogie Board’s writing surface on your computer’s (or mobile device’s) screen in realtime. This single feature could prove to be a boon for professional presenters and educators who with standard hardware, could essentially have images wirelessly transmited to a large screen for everybody to see. 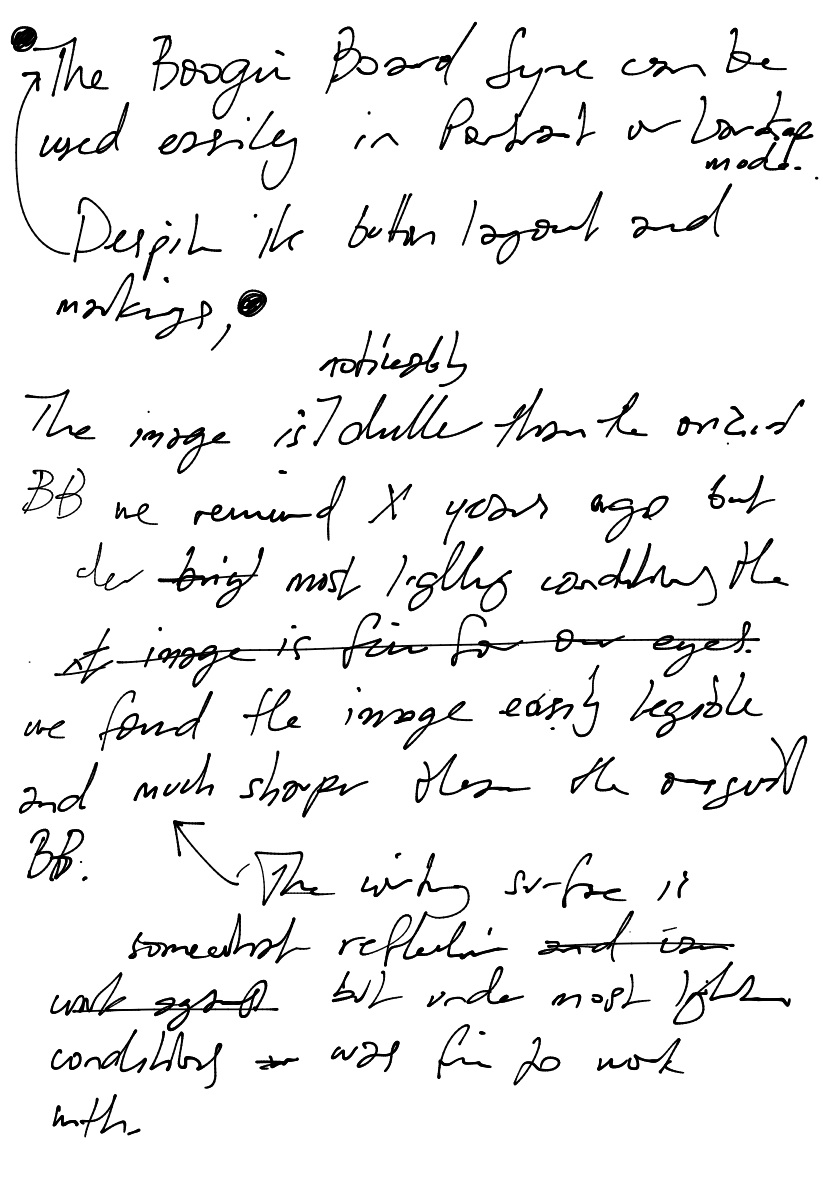 Another interesting feature is the “Digitizer” mode which allows the Boogie Board Sync 9.7 (along with its stylus) to act as a trackpad/tablet. When hovering above the Sync 9.7’s writing surface, the stylus acts as a pointing device, allowing you to move your cursor around the screen. The Stylus also has a build in button which acts as a mouse click. While the digitizer function works and is an interesting application of the hardware, we found it to be a little too flighty for general use. Having said this, with some tweaks to your trackpad/mouse settings, the digitzier function may prove a cheap alternative to an expensive drawing tablet, particularly for budding graphic designers.

As well as the OS X version, we gave the iOS version of the Sync software a run and found the app to work well. In fact, the features of the Sync software felt more at home on the small iPhone 5 touchscreen and while its features (other than the digitizer) mirrored the OS X application, the mobile version just felt better. 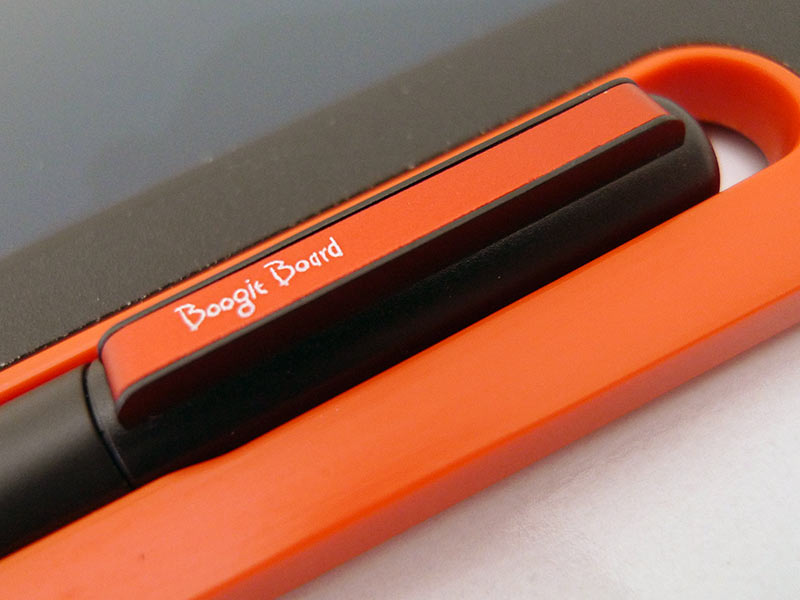 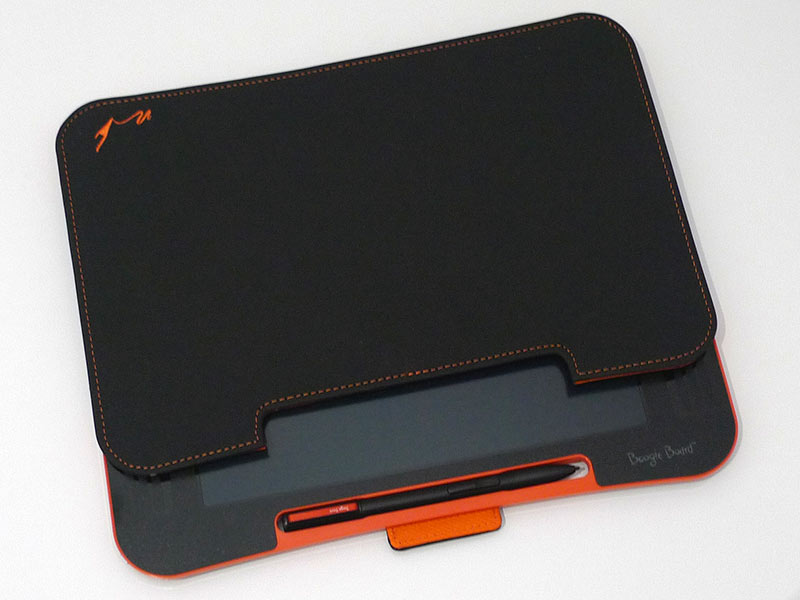 On/Off Button
Up to one week of typical use on a single charge
Sleep mode: after 1 hour of inactivity 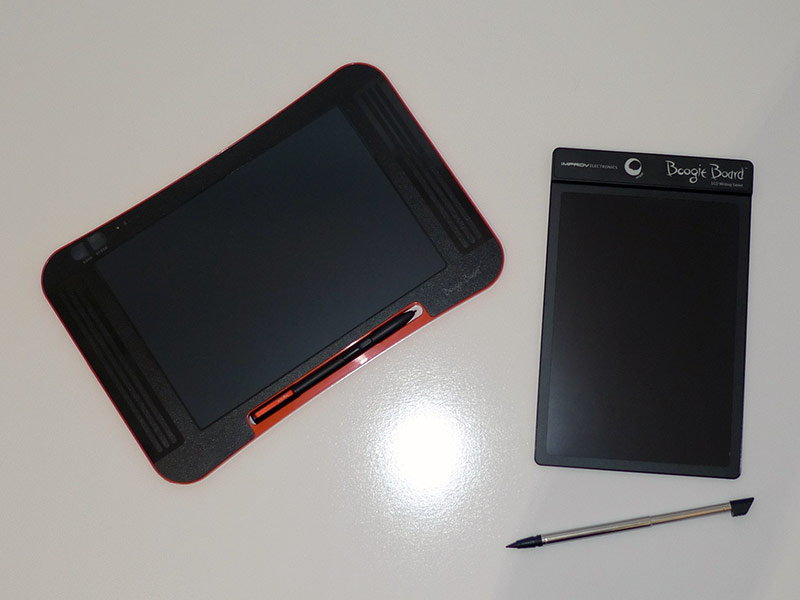 Overall, the Boogie Board Sync 9.7 is the evolution of the original Boogie Board that we always wanted to see. The ability to save and transfer images both to computers and mobile devices really makes the idea of using less paper a very real and accessible reality. The basic writing/saving functionality works great and while the digitizer and (non mobile) Sync software could do with some refinement, the Sync 9.7’s core functionality is everything we expected it to be.

Compared to the original Boogie Board, the Sync 9.7 is a refined piece of hardware that as our opening suggested, has come of age.

The Boogie Board Sync 9.7 is available from a number of online retailers for a recommended retail price of $99US. For more details, including where to purchase, please visit ImprovElectonic’s website.