Is that a Projector in your Pocket? – ShowWX+ Laser Pico Projector Reviewed 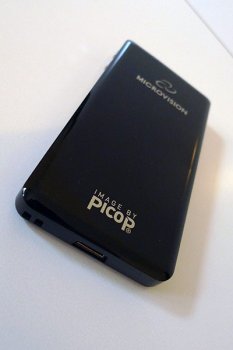 Pico projectors are small enough to fit in your hand yet powerful enough to take documents or videos from your portable computer or phone and turn them into fully fledged small group presentations.

Read on as we take a look at Microvision’s entry into this growing segment: The ShowWX+

Provided you are looking at projecting from an iDevice or from a Composite source, the ShowWX+ comes with everything you need to get up and running in a flash. Accompanying the device itself is a multi-country power adapter (four international clip on power point adapters are included – Australian point included), a small manual, the projector’s battery and three connector cables: A USB to Micro USB charging cable, a dock connector cable for connecting the ShowWX to your iDevice and a composite (A/V) cable adapter.

Also included in the retail package is a wrist strap and soft storage pouch. 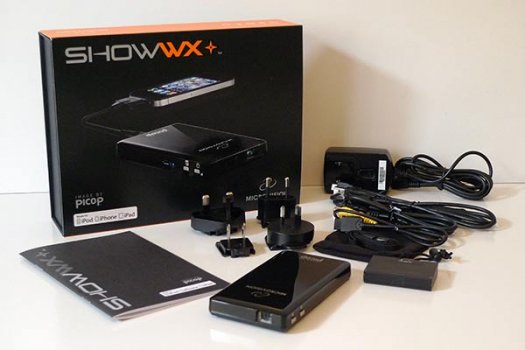 The unit itself makes an immediate impression, with its glossy black top adorned with “Image by PicoP” and the Microvision Logo contrasting nicely. The projector weighs a little over 100grams and at 14mm x 60mm x 118mm, the ShowWX+ is only slightly larger than an iPhone 4.

Strangely, the actual projection lens looks rather crude at a glance but in reality this probably says more about the impeccable presentation of the rest of the unit, rather than any real issue with the lens cavity itself. Opposite the business end is a proprietary video in connection along with a small set of holes for affixing the included wrist strap. 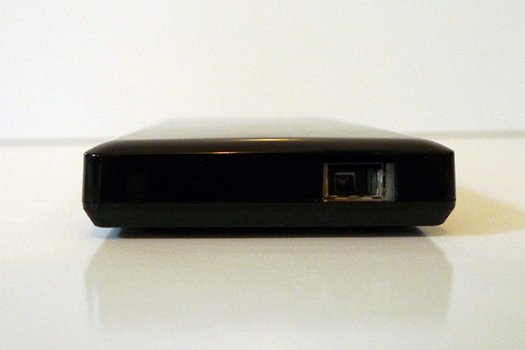 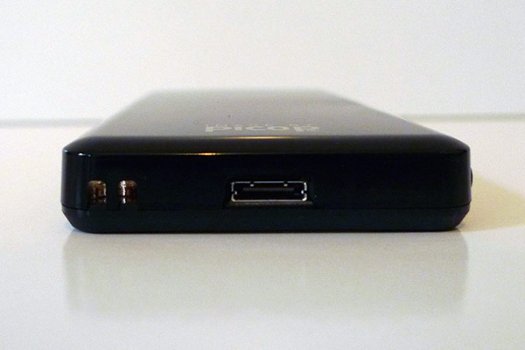 On one side of the projector are two neat silver up/down hot key buttons used to traverse the built in menus, while on the other there are two similarly shiny buttons for power and menu/select. Next to these are two small LED indicators followed by the Micro USB power input port. At the far end of this side is a 3.5mm audio passthrough jack. 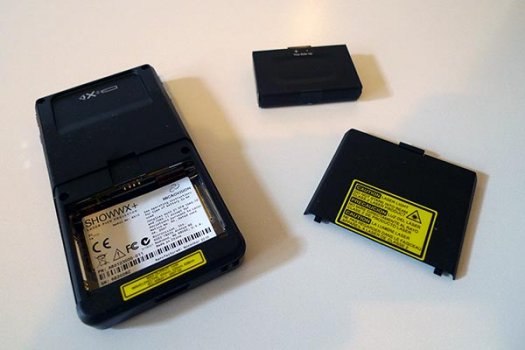 The underside of the projector has a matte finish and provides access to the user replaceable battery. The battery is good for 1800mAh and provides the ShowWX+ with around two hours of projection between charges. The ShowWX+ can be charged from the included plug pack or via USB. The unit can also be powered directly from the USB port while in use but it doesn’t seem to charge the internal battery while doing so. 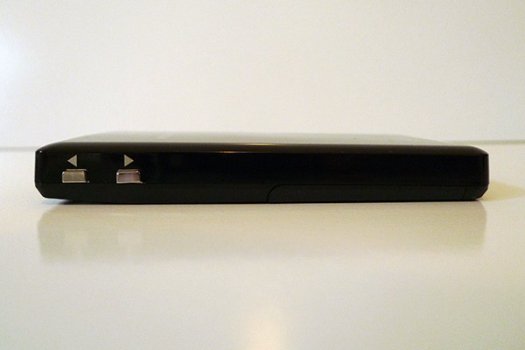 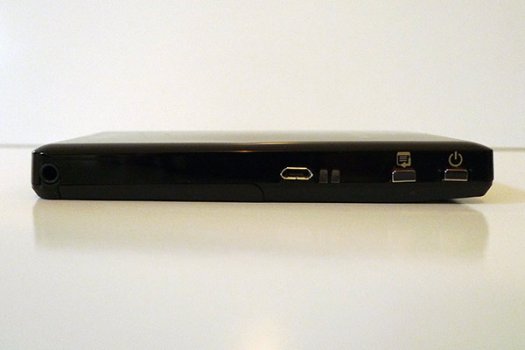 When sitting next to an iPhone 4, the sheer size and shape of the ShowWX+ makes it look more like a fancy external battery pack than an actual projector – This is how portable this device is. 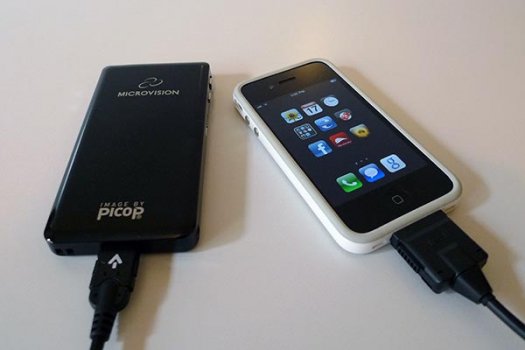 For testing purposes we also received the VGADock adapter which allowed us to use the unit as an external projection monitor. It’s worth noting that this cable/dock is not included in the retail ShowWX+ package but is sold separately.

USAGE
The ShowWX+ has a screen resolution of 848×480 with a 16:9 aspect ratio and employs a new laser projection method that through some clever voodoo, automagically focuses itself irrespective of what the ShowWX+ is projecting onto.

During our time with it, we tried the ShowWX+ in a variety of lighting conditions and projection surfaces and found that while any light coloured surface created an acceptable image, the room lighting was a more critical factor. 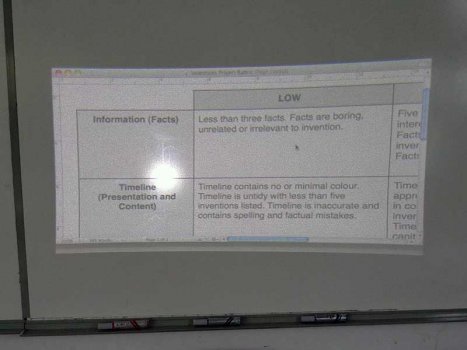 Due to its size, portability and price (relative to larger traditional projection devices) we thought the ShowWX+ would be a great tool for use in a Primary (Elementary) school setting. While the unit itself performed well, the general openness and light flooded classrooms proved a challenge for the pocket projector. Unfortunately in most classrooms, the 15 lumens the ShowWX+ output just couldn’t compete with the ambient light. 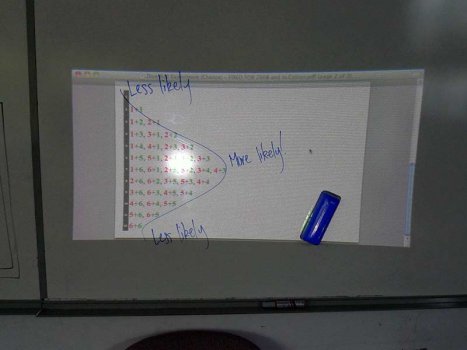 In rooms with small nooks or covered up windows however, the case for using the ShowWX+ in an educational setting grew stronger. Connected to a laptop computer, the ShowWX+ allowed a small group of children to watch presentations as well as follow reading material together. Another way we found the ShowWX+ to be useful in the classroom was to have it assist in creating graphics or images on whiteboards: Gone are the days of lugging in a traditional overhead projector. At least where the ambient room light allowed, the ShowWX+ made accurate drawing of complex images on whiteboards a cinch. Even in favourable lighting conditions (semi-dark) conditions, the available lumens made large projection very washed out and after some experimentation, found that images of 20″-30″ (on the diagonal) were about the ShowWX+’s usable maximum during the day. 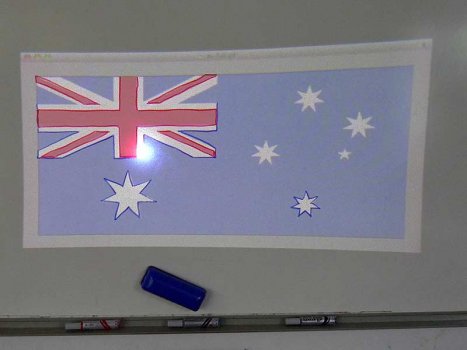 Despite the educational possibilities in less bright rooms/areas, where the ShowWX+ shone was in completely darkened rooms or at night. In a darkened environment, the unit was able to vividly display images of near any size although due to the unit’s 848×400 resolution we personally would suggest 50″-70″ images as being the unit’s size/image quality sweet spot. While in very dark rooms the image looked good – watching a movie was not awful – it is important to note that the ShowWX+ is not – and shouldn’t be – compared to a modern high fidelity projection device. It projects well for what it is, but it’s no Runco!

The new laser technology, while bringing autofocus also brings a strange shimmering quality to the projected images, be they moving or still photography/slideshows. While it is difficult to describe, the shimmer is like a slight sparkle in the solid colours of the image which is immediately noticeable. This shimmer isn’t a show stopper but it does take some getting used to – particularly if the ShowWX+ is used for reading material or for projecting a computer operating system onscreen. It’s a little like a moving image on a plasma television compared to one on an LCD TV. Some find the way LCD presents moving images abhorrent while others think nothing of it. If you plan on watching movies or slideshow presentations, the image should be acceptable to most but if you are looking at using the ShowWX+ as a second monitor, we suggest you see the image in the flesh before committing.

The built in menu system allowed for the altering of brightness, colour mode, aspect ratio and a few more advanced image and colour adjustment tools. While these options were valued, due to the issues the unit had with ambient light, we found that the Vivid colour option coupled with the brightest brightness setting were invariably the settings that produced the best images. 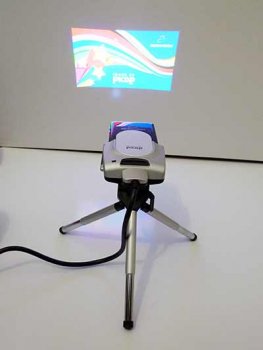 Connectivity was good, with both the optional VGADock connector and the included Apple dock connector cables working without issue. While the VGADock design was quite bulky, it’s snap in mechanism was secure and when mated to our $2 mini tripod (See photo) it created a stable and wholly adequate projection platform. Using the Apple dock connector cable, we also tested the ShowWX+ with an iPhone 3GS, iPhone 4 and an iPad 2 with no problems playing back a variety of video content. 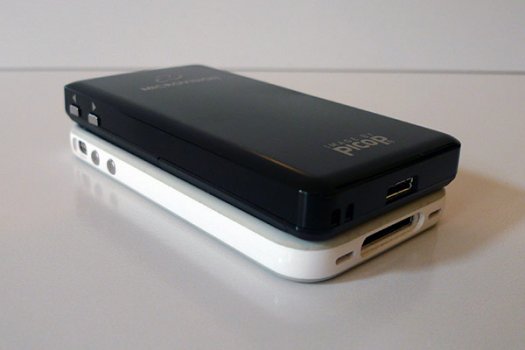 Interestingly, when we charged the device via USB with our MacBook Pro, the ShowWX+ showed up as a 1.9MB storage device – presumably for firmware updates.

CONCLUSION
While the actual ability for the projector to display images in brightly lit rooms was less than stellar, it’s performance in darkened rooms (the darker the better) was, considering the emerging laser technology employed, easily acceptable.

Despite this, Microvision would do well to reconsider it’s use of proprietary connector ports at the projector end of the link – which as an aside, seems they have, with the new ShowWX+ HDMI model. This is important as the ShowWX+’s tiny form factor was somewhat marred by the need to lug around proprietary cabling. A prime example of this is the VGADock: While it’s innovative tripod mountable enclosure was handy, it’s physical size (including cable) made it take up more room than the projector itself! Similarly, connecting an iDevice meant carrying around the connector cable – If the ShowWX+ could use a standard Apple Dock to USB cable, forgetting a cable would be far less painful as who doesn’t have one of these lying around these days?

Overall we did like the ShowWX+ but found its scope limited by ambient light and the unit’s need for carting around proprietary cables. While the shimmer factor may put off some, we got used to it pretty quickly. And nobody should really be using an external monitor for anything other than presentations at this resolution.

For showing presentations, image slideshows and videos in dark to very dark rooms, the ShowWX+ is a good solution for those who like to be mobile. Just make sure you don’t forget those cables!

The ShowWX+ projector – now also available with a built in Mini HDMI port – retails for around $350US. The optional VGADock connector can be had for around $40US.

For more information about the SHOWWX+, it’s accessories and the new unit sporting a HDMI port, visit the Microvision website.