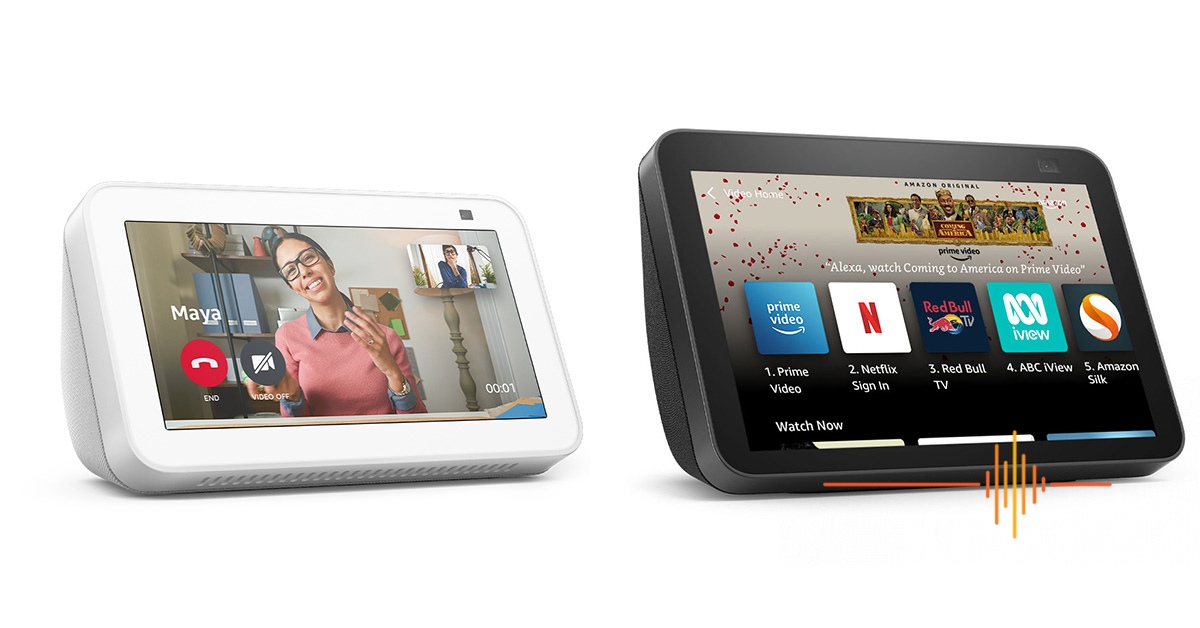 DRN is please to welcome Chinh Toquale to the team. Chinh is a reformed programmer, a project manager, an enterpreneur, fish breeder, bread maker extraordinaire and DIY enthusiast.

Amazon’s Echo Show 5 is a much more affordable option than Echo Show 8 but is the price difference worth the upgrade? For all intents and purposes, the software features and capability are the same on both units. It is not simply a decision on whether you want a 5- inch or 8-inch touch screen. The 3 inches difference doesn’t sound like much but when you are limited on space or want a minimalistic, unobtrusive look, then size does matter.

It is worth considering your physical living space and where you want to place the Echo devices, whether it be the living area, open plan space, bedroom, kitchen, or upstairs 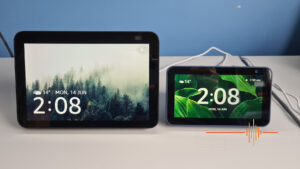 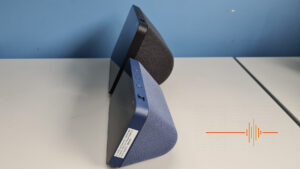 A screen display makes the Echo Show a great versatile device which can be placed anywhere in the house. Both units have physical volume control buttons at the top of the unit. If you are concerned about privacy, you can turn off the microphone and cover the camera lens using the built-in shutter cover switch. 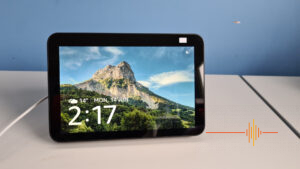 While there isn’t a lot of difference between Gen 1 and Gen 2 of the Echo Show 5 in terms of styling and what is under the hood, the latest Echo Show 5 gets a camera upgrade to 2MPs and is available in two new colours, white and a deep blue.

The Echo Show 8 (Gen 2), however, has undergone a significant upgrade with a 13MP camera and 2 x 2.0” neodymium speakers. The stereo sound quality is surprisingly good with a huge improvement in bass and mid-range sounds over the Echo 5 and other predecessors. For a lounge room unit, the Echo 8 is worth the extra money for a music lover.

It is worth noting that the screen resolution on the Echo 8 is higher than the Echo 5, bringing the total experience of video and video-conferencing between family members a little better. There is definitely room for improvement in this area though. The setup was not easy and straight-forward as one would expect out of the box. It is also worth noting that both units have basic equaliser adjustments for base, mid, and treble.

To Show or not to Show?

Whether you are adding more Alexa devices to your home or deciding whether it is worthwhile upgrading from an Echo Dot to one with a display, the recommendation is almost always to “get the Echo Show with the display”.

As a long term user of an Amazon smart speaker, who is used to voice control, having a screen display brings the virtual AI assistant to a different level. The most obvious being video services – ABC News, iView, Netflix and of course Amazon Prime.

If you don’t use any of these services, there is always YouTube. Yes, despite years of disputes between Google and Amazon, YouTube is now available. The Echo Show uses Amazon’s Silk web browser to display YouTube content. Simply ask Alexa to play something from YouTube, “Alexa, play something funny from YouTube”.

You can also use Silk for searching the web but it is much easier using your smartphone. For those who insist, you are able to change the Bing default search engine to “Google”, “Yahoo!7” or “DuckDuckGo”. I can see the possibility of new and exciting things happening here. To open the Silk browser say, “Alexa, open Silk”. Disappointingly, Alexa does not understand natural expressions like, “Alexa, open the Silk browser” or “Alexa, open a web browser”.

While it is useful to be able to play video content, I wouldn’t be rushing out to buy the new Echo Show simply on its Video content ability. The screen itself is nothing to rave about – there is nothing great about its visibility and brightness. In a well lit room with some sunshine, even at the brightest setting, it is at best average – you cannot see the display well on the Echo Show 8.

The less obvious uses for a display screen, but incredibly convenient, include displaying the name and cover of the piece of music currently playing, a visual countdown of the kitchen timer (especially when you have multiple timers, clock, and weather information. 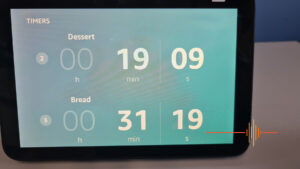 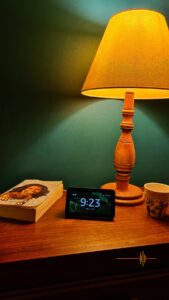 The Echo Show as a clock radio

Before I go any further, I want to go on the record to say that the Echo 5 deserves much more recognition than just simply being a bedroom device. Its elegant design and integration with Amazon’s smart home platform makes it suitable for other purposes as well.

When the bedroom clock-radio broke the first question was whether to replace it with a smart device like the Amazon Echo show, Lenovo Smart Clock, or Google Nest. Within 10 minutes of setting up the Echo 5, ready for this review, the winner was clear. My partner who was initially hesitant and didn’t like the idea of a smart device listening in the bedroom double-down to say she wanted to keep the Echo 5.

For those in a similar situation here is what sealed the deal: 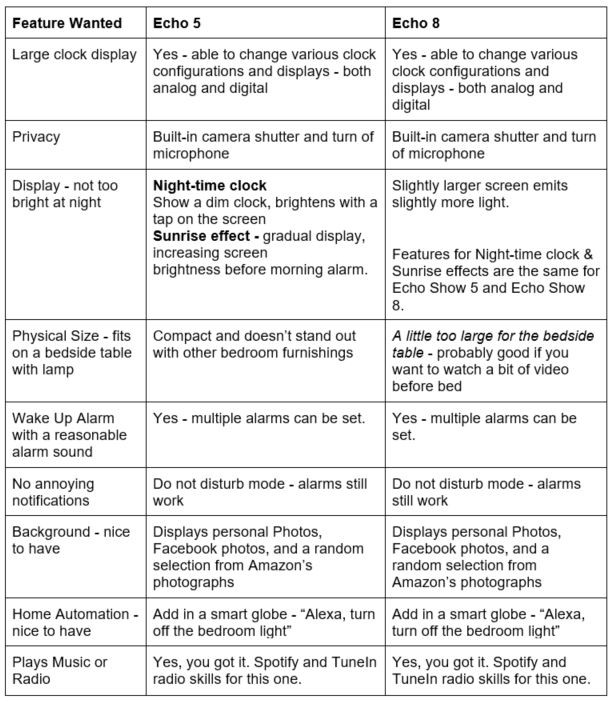 However, deciding if it is worth forking out the extra money for an Echo Show 8, the decision is a lot more difficult if you are tight on budget. There is without doubt the sound quality of the Echo Show 8 is superior. A slightly larger screen makes it better for seeing shopping lists, viewing notifications, reading recipes, cooking instructions, and movies.

One embarrassing feature for Amazon though, that I am sure Amazon will be promptly fixing, is the set-up of Amazon Prime. If you have set-up your Alexa device account with a different login from your main Amazon Prime Video account – you cannot play any Prime Video content. The Echo Show presumes these are the same account otherwise you get an infamous message “something went wrong”.

Certainly, the inclusion of YouTube and Amazon’s Silk Web Browser is a winner and we are keen to see more feature rich content being released in the near future.

Echo Show 8 for $199 and Echo Show 5 for $119 are available on amazon.com.au. Don’t forget Prime Day is not far away on 21st and 22nd of June. DRN would like to thank Amazon for providing the review unit.