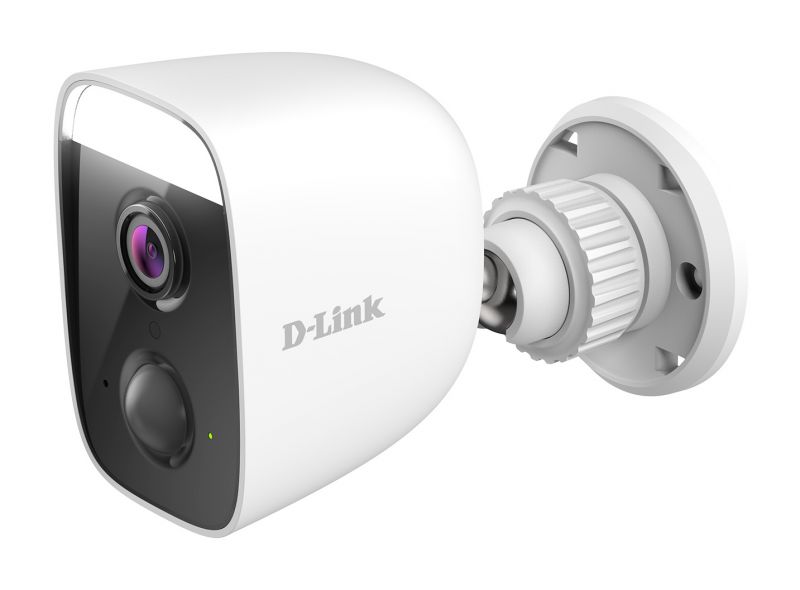 We wrote earlier about the new Smart Security Cameras from D-Link here.

Recently D-Link announced two more cameras that have been equipped with the latest tech, including edge-based person detection with AI technology.
One of these, the DCS-8630LH also has an integrated spotlight to bring colour and better visibility to night time vision.

We thank D-Link for providing us with the opportunity to test this spotlight camera out.

First a bit about some of the features of the DCS-8630LH.

“Not only are the cameras interoperable with other devices in the mydlink ecosystem, but they also work with the Google Assistant and Amazon Alexa, as well as conform to the ONVIF standard, allowing seamless recording to external devices such as a NAS or NVR. Additionally, both cameras feature built-in Bluetooth for fast and easy setup, both cloud and local recording options, and support remote viewing and management via the free mydlink app.”

Okay, so far not all that different from the previous models.
What else?

Our previous experiences with security cameras often led to many false positives, like a warning when movement was detected and it turned out to be just wind in the trees…

What’s the solution?
From the announcement presser again:

“The enhanced Artificial Intelligence (AI) used by the cameras cleverly identifies human motion, ensuring they will not be triggered by the likes of a pet, bird or passing car that may come into the viewing area.
Edge-based technology also processes information on the device locally so there’s no need to send video to the cloud for processing, speeding up alert response times and ensuring you receive alerts only when a real person is detected. A passive infrared (PIR) sensor further reduces false triggers so you only see what you want and need to see.”

Another problem area is that security cameras have had a bad rap in the past because they were easily hackable. Not these ones:

“One of the biggest concerns with IoT devices and Wi-Fi networks these days is privacy. To combat those concerns both these new mydlink cameras feature the latest and most secure industry-standard 128-bit encryption ensuring greater privacy throughout users’ devices and networks.”

We’ll see how it all works out in practice pretty soon.

One of my favourite features of this particular model, the DCS-8630LH, is that it has a powerful 400 lumen spotlight.

When you do the initial set up of the camera make sure you don’t look into the camera as several times during that process the spotlight comes on! And it is very bright indeed!
It will not only bring great colour to the notorious black&white night time vision but the light can also be a deterrent to intruders. Yes, you can activate the spotlight (as well as a very loud siren!) manually in addition to being triggered by motion.

The unit has a built-in Smart Home Hub which connects to other mydlink Smart DIY devices, like cameras and sensors.
And, being an outdoor unit, it and its 7m long cabling is fully weatherproof (IP65 rating).

Finally, the last few things to mention is that the DCS-8630LH has a speaker and microphone, giving you an ear on the ground, so to speak, on what’s happening or being said. And if it is a delivery driver at your door you can give him additional instructions via your mobile phone.

This means that it will also pick up the sound of a forced entry, like glass breaking and warn you.
The unit’s main claim to fame is, of course, the 150° wide angle view capable of capturing Full HD 1080p video at 30 frames per second.

The new D-Link cameras are extremely easy to set up.

I remember my earlier fiddling with getting the mydlink app to play nice but the just released version 2.0 makes the whole process a cinch.
Download, log in, scan the QR code, connect to Wi-Fi, camera added.
Within seconds you can see what the camera is seeing.

Back to the new app for a moment:

The new mydlink app has many new features, such as Smart Bluetooth Setup and the ability to turn on or off multiple devices and automation rules at once with “Scenes”. You will see a much more simplified setup wizard.

I also found that device controls are clearer and all the other functions, such as scheduling and automations are simpler to apply as is the improved timeline for checking videos and events.

On the whole I give a big thumbs up for the better user experience. It is attractive and well designed.

There’s one optional extra step in the setup if you also like recording to the device itself, you can insert a microSD card.

The best option for most folks will be recording to the Cloud and D-Link has several plans available from a basic free 1 day video retention for 3 cameras up to a USD10/mth for 30 days retention for up to 10 cameras.
Importantly, all the D-Link smart cameras play nice with compatible NAS units (ONVIF Profile S).

The best spot for this camera for me was at the front verandah of our property where it would have good coverage of the two approach paths to the house.

I would like to show you a visual of what it does see but for obvious privacy reasons I won’t. The D-Link website has some good examples of this field of vision.

Person detection is perfect. And you’ll get a notification within 3 or 4 seconds of the intrusion.

The videos are of Full HD quality and make it easy to recognise who’s calling at your front door.

Most of the videos were of my family of course, coming and going.

Maybe with face detection the smart cameras can recognise us as friendly folks that need not trigger a security warning…?

The video clips are sometimes too short at 15 seconds.
Often you’d want more coverage of the event.

If there’s one camera to start out with in automating and securing your home, it’s the DCS-8630LH Spotlight.

It’s got all the features you need and all the functionality you’d want in a simple-to-set-up package.
Great as a stand-alone camera, brilliant in a group of D-Link smart cameras and sensors.
Yes, it works with Alexa and Assistant so you can easily control other devices in your home as well.

The DCS-8630LH which retails at AUD$279.95 is available from www.dlink.com.au as well as from other outlets.