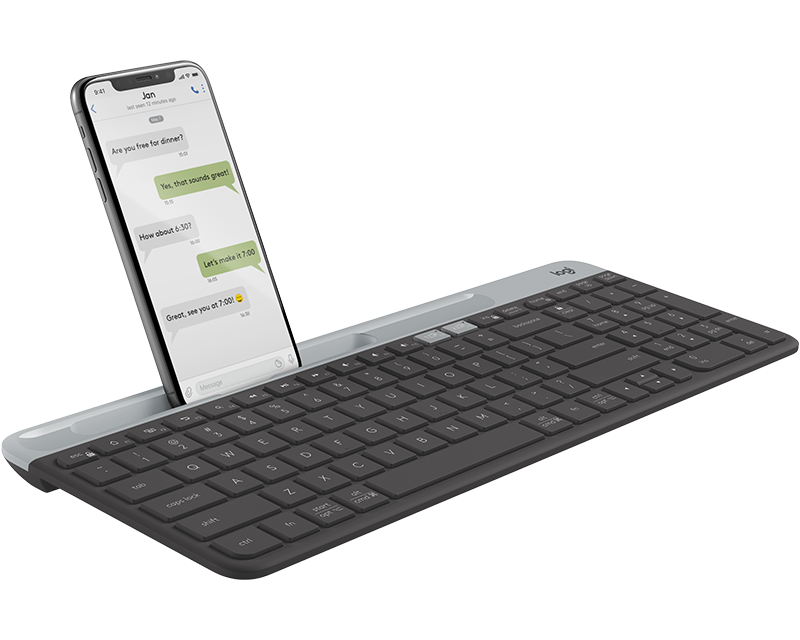 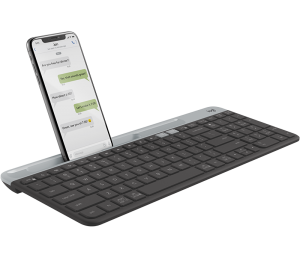 To say I spend a ridiculous amounts of time typing on one form of device or another would be an understatement. On average I would have a minimum of two laptops and two phones on my desk, usually more. I multitask constantly and I am smashing out messages on my laptops, phones, interspersed with other things.

Before Logitech Flow I would have a mouse for each computer, making for a very cluttered workspace.

Then along comes the Logitech K580, a multi-device wireless keyboard.

What does it do for me, the quintessential modern day time poor, device rich, working man?

Personally I have a preference for a physical keyboard. The family’s first computer was a purely keyboard affair, a little home built unit with its clear acrylic case and a whopping 4k memory. It was not until a few years later we added a joystick to the repertoire. My first mouse came in the mid-80s along with the IBM XT running GEM. To put it simply, my perchant for command line runs deep to the root, pun intended. Sure I can bang out a message on T9, the Blackberry, and any number of keyboard apps on the smartphone but I always prefer a physical keyboard, where I can clock over 100 kpm and in excess of 95% accuracy.

First Impressions
I was expecting something more like a home theatre keyboard, with a mouse pad built in to the side of it. I was pleasantly surprised by the slim but full size keyboard with a numeric keypad that I pulled out of the packaging. It was also heavy for its size, another thing that I did not expect. It felt … rock solid. There is a slight angle to the keyboard for ergonomics.

The most distinctive feature on first looks is the built-in smart phone (or small tablet) cradle. Hiding under this cradle is a Logitech Unifying dongle and the battery compartment. The K580 is supports a maximum of two devices – one via Bluetooth and the other via the Unifying receiver. 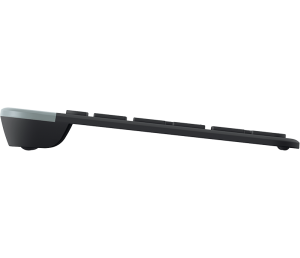 In Use
Like all things I expect of Logitech now, it is the ease of connectivity. Which is why I was a little surprised that it took me a few goes to get the K580 hooked into my existing Unifying receiver. In fact I had problems initially with any of my Unifying receivers, including the one that came with the K580. I did eventually get it sorted out, just took a little longer and more effort than I expected.

The Bluetooth connection to my Pixel 2XL was far easier, working on the first go. The cradle at the top of the keyboard is just the spot to rest my phone. The groove is big enough to accommodate the Pixel 2XL in landscape orientation, even with the official case on it. My other phone, the Pixel OG with its bulkier case failed to fit, so I had to remove the case and your mileage will vary.

The K580 itself has a laptop-like keys which did not require a transition from my work laptop (Toshiba) or my personal one (Lenovo) to get familiar. There is a slightly rough texture to the keys, but the pitch and travel feels pretty similar to a standard laptop keyboard. Sometimes I feel that I use so much different input devices that I am immune to changes, but the K580 just works, my fingers fall right where they are conditioned to and I am up to speed. The keys are a little quieter than my work laptop which is always appreciated.

The K580 works great as a Windows keyboard, in fact I am banging out this review on it right now. No doubt it would be the same for MacOS, given it features special keys for both OS. Both of these OS are long established and known quantities.

So how well does it work with my Android phone? Well it certainly upped my typing speed and accuracy, as I am notoriously awful at accuracy despite trying many different keyboards. The catch though, is that you have to remember Android is a touchscreen interface first and foremost. So while the physical keyboard is making life easy for me to type out long messages on various apps, I cannot escape touching the screen to make it all work. The one that bugged me the most is that I could not just hit enter to send messages on various apps, I physically had to touch the send button on the screen.

Unfortunately there does not seem to be a comprehensive list of keyboard shortcuts available for Android. There are some universal shortcuts that seem to work across most apps, such as Copy (Ctrl+C), Cut (Ctrl+X), Paste (Ctrl+V) and Select All (Ctrl+A). 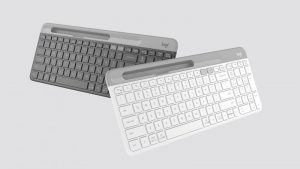 Gripes
There is a transition lag when I switch from WiFi (laptop) to Bluetooth (phone), it takes a few seconds before key presses are registered.

I feel that Logitech missed an opportunity to have an app to help with keyboard mapping. There is the Logitech Keyboard Plus which was last updated in 2015 and really only manages keyboard layouts if you can get it working (yes I did get it working – barely – on Android 10).

I would love to be able to charge my phone whilst it is in the cradle. Given that the K580 is powered by 2 x AAA batteries it would be a pipe dream.

Conclusions
The K580 has been a great little asset to my productivity, it allows me to quickly type up a message on apps that has no Web support without having to drop everything constantly. Yes I still have to hit the little send button on screen but it is a far cry from having to take the pedal off the gas and type on a virtual keyboard.

The Logitech K580 is available in Graphite or Off-White, with a RRP of AUD$79.95. No doubt you can shop around for a cheaper price, and it is certainly worth considering for the convenience. DigitalReviews would like to thank Logitech for their continued support. 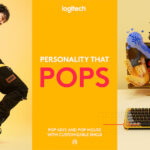