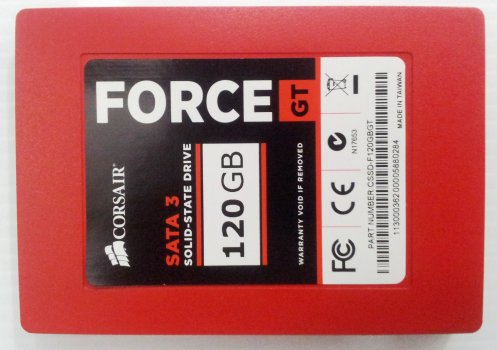 We are by no means the typical PC builders who love to modify their rigs every week but when Corsair sent us their latest SSD as well as a power supply and water cooling unit, we figured that it is high time we build ourselves a kick-ass system that incorporates these components and then some! Our main focus is on the Corsair Series GT 120GB SSD and the HX1050 ATX Power Supply and the H80 Water Cooling unit as well as the Antec TAKE 4 case it’s all housed in and this is how we implemented them.

Corsair Series GT 120GB SSD
We had put the SSD to the test already some months earlier when the OCZ Vertex2 gave up the ghost in one of our test laptops. It was a case of typical SID: Sudden Incomprehensible Death…. It is not the first time that has happened to an SSD unit in one of our test platforms but we learnt from the various forums that this was a very common occurrence with the Vertex2… We have consequently amended our previous recommendation for this drive to a warning: do not buy! This unit is probably not sold any more as the Vertex3 has taken its place but if you still have one make sure you do your backups!

The Corsair unit hopefully does not suffer this same fate a few months down the track and that’s why we have been testing it out thoroughly for about three months already. Even though it is a SATA 3 device it can work with SATA 2 and blisteringly fast! Caution: we had some issues with BSOD probably because it was hamstrung by a motherboard that only delivers SATA 2 throughput yet it was still incredibly fast. What will it do in its proper environment, with an ASUS P9X79 DeLuxe main board and the latest Intel i7 chipset? What will happen if we put in another Corsair SSD for a RAID configuration? And if we hook that up to the fastest enterprise level NAS from QNAP?

Installation of the Water Cooling Unit
Installing an SSD or power supply is a non-event but a water cooling unit can pose some challenges. The H80 from Corsair has all the bits and pieces to make it fit just about anywhere. Except in our situation we wanted to use an Antec TAKE 4 server rack case that had been sent for review. We had to modify one of the drive bay enclosures rather drastically to make it fit. We actually went for a McIver solution (see photo) which worked quite well in the end. Now, the Antec TAKE 4 case is a very flexible environment for just about any component you want to house in it but obviously the water cooling system is a rather specific item that needed some coaxing and nudging and angle grinding to make it fit. We also had to set the whole assembly back a little bit because the chip on this motherboard sits rather towards the back of this case and the two hoses of the H80 didn’t quite reach that far! 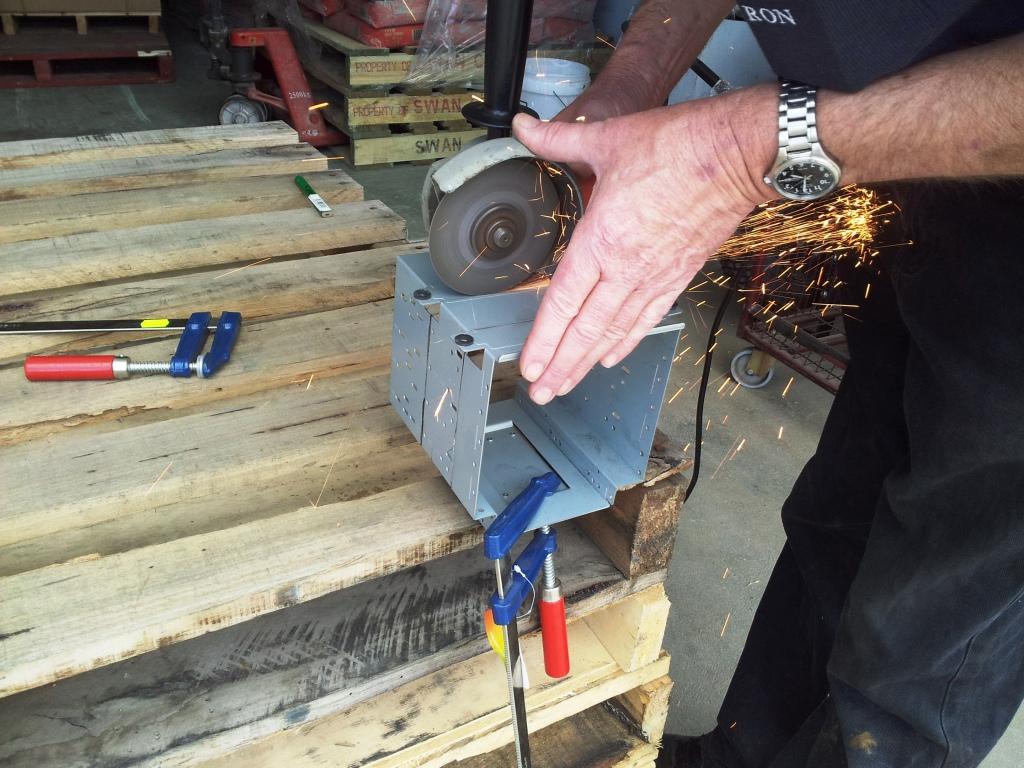 Just a couple of specifications for this case: the front door set includes a keylock and a light pipe behind which you will find two USB ports and one 1394 port. The usual power switch, reset, power, and HDD LEDs are mounted above that. Inside the case is plenty of space for all sorts of hard drives, optical units, TriCool fans to surround an ATX 12” x9.6” motherboard. The TAKE 4 has been on the market in its various iterations for several years already but the fact that it is still popular is due to the high quality built and the value for money. It was much better than another well-known brand that sent us a case to review with real sharp machined edges….

UPDATE: We just learned that this case is being continued…  We did move all the Corsair innards to the Antec 4U22ATX BLACK Rackmount Chassis which was a better fit and, frankly, also a better case.
Back to the installation of the water cooling unit. We went about it with the usual gung ho type of gusto without reference to the installation leaflet but it is handy to have a quick look at it to make sure you do it right. It’s not hard but fitting the actual cooling unit onto the chip is a bit of a tight fit. The first time around we used the wrong length screws that caused this unit not to make any contact with the chip at all!

Temperature Control
Keeping things under control is always a good motto in life. How much more important is it to keep the temperature under control when it comes to electronics. Fortunately, we have an air-conditioned server room where all our test equipment resides. We keep the air temperature at a dry 18°. This does not mean that the chip would not benefit from the water cooling as well. We overclocked that chip to more than 5 GHz without it breaking a sweat. 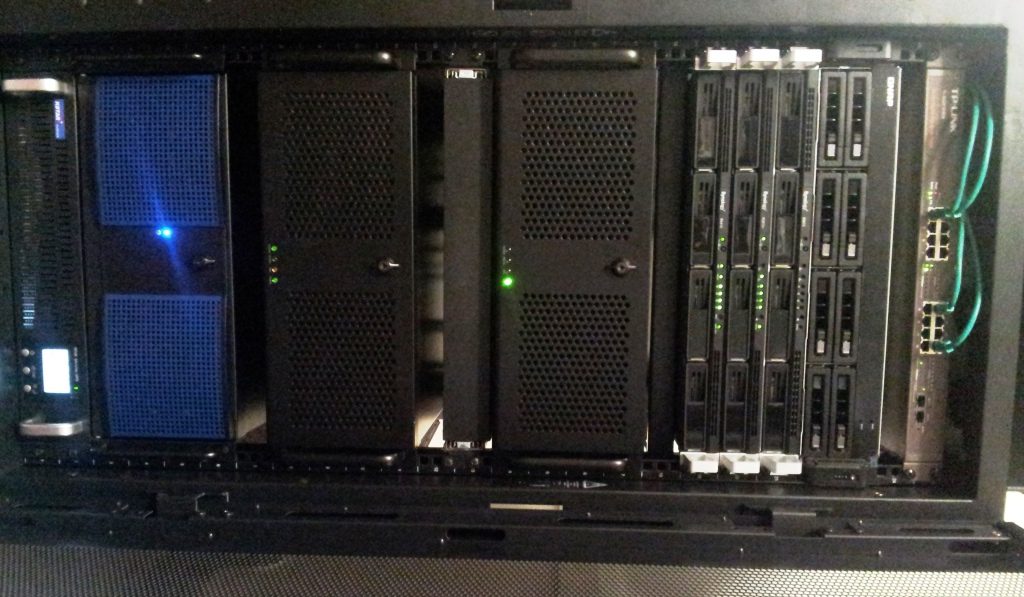 HX1050 ATX Power Supply
The HX1050 ATX Power Supply is one massively engineered unit that is well up to the task of powering this beast. We have three graphics cards (GeForce GTX570) that will feed six monitors. The motherboard is the brand new Asus P9X79 DeLuxe with SSD caching with Bluetooth GO 3.0 and the graphical UEFI BIOS interface. Great looking kit and a good home for the Intel i7-3930k processor. Initially we had used 16GB Corsair Vengeance RAM (dual channel) but we quickly upgraded this to Quad channel DDR3 version for even better performance. Fortunately, memory is extremely cheap these days and you can never have too much memory. The Vengeance branded RAM is excellent value for money even though it is not very over-clockable and not as fast as the Dominator series from Corsair.

The 1050 ATX is enough to push even 3x Nvidia GeForce GTX 570 running in 3-WAY SLI, but it’s border line. It wouldn’t handle much more…

Testing
Not surprisingly, this whole setup generated the highest Windows Experience Index possible: 7.9!
And for those who can’t live without any graphical proof of the speeds obtained, just have a quick look at a few screenshots, we’re getting around 1000MB per second in RAID0 mode! And that’s megaBYTES. 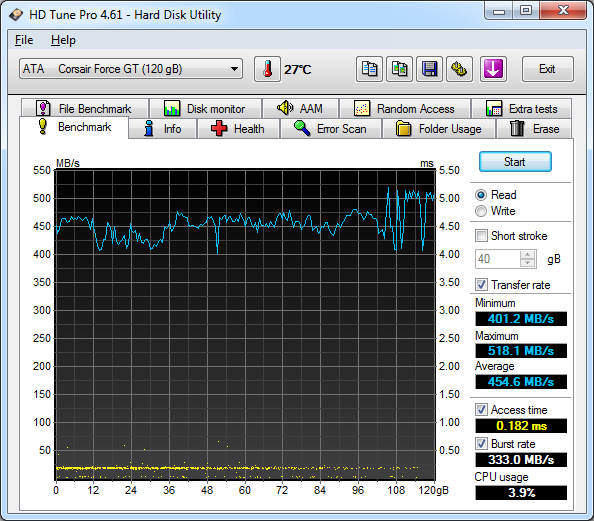 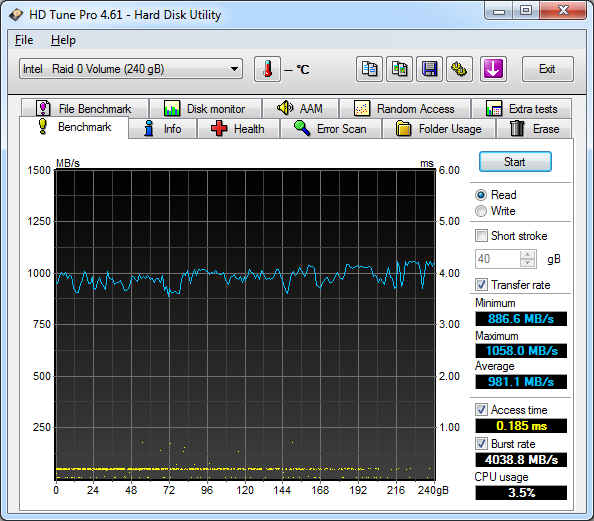 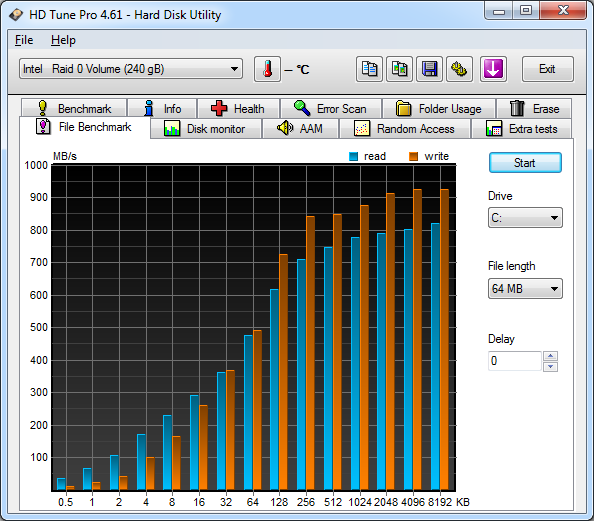 Conclusion
Corsair has a great name among computer enthusiasts and for good reason: their components are high performance and very well built. Best of all the pricing is good:

So if you want to take to tinkering over the holidays and get some more grunt out of your system, these Corsair components are highly recommended!