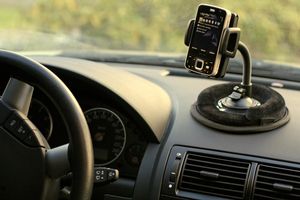 What’s a dashboard Donut? It has nothing to do with anything edible that might have been stuck to your car’s dashboard. Neither is it a device to ease one’s haemorrhoids pain as one uncharitable co-worker remarked the other day. Nor is it a parking space for a desktop rodent. It’s big and incredibly heavy and becomes an immovable object once you find the right spot on your dash.

It’s Adapt’s latest contribution to automobile safety: a place to put your mobile phone, PDA, PND or any other device and anchor it securely.

Let’s see how it works.

Let’s first answer the question: why?

Good question (if I may say so) because it is not particularly pretty nor unobtrusive to have in your line of sight all the time. The normal way to fasten any device onto your windscreen is with a suction cup holder which works fine in all cases except in Europe. There the Brussels bureaucratic busybodies got it in their heads that this would be unsafe. This may be so if you consider the fact that when you park your car and take your phone or device with you and remove the suction cup, the ugly ring would be the tell-tale sign that this vehicle might have something worthwhile to steal. So this contraption will not leave any suction marks on your windscreen and that is a plus. The fact that it complies with the new European laws means there is a definite market in that neck of the woods. Coupled with the fact that you can use it straight out of the box means that Adapt may have something here. Yes, there are also some cars that have such a deeply recessed windscreen that it is almost impossible to find a suitable place for a suction cup….

So how does it work?
It’s a function of weight and an anti-slip material that is so strong and resistive that a rear end collision is unlikely to move it. On the other hand it is very easy to pick up together with the device that you have suctioned onto it so, rather than stretching out your arms to program in your destination, I find it much easier to just pick up the whole assembly and fiddle with it before driving off. This functionality also makes it easier for your passenger to pick up the thing, do some navigating or select some good music tracks.
We also tested it under some rigourous driving conditions with sharp turns and heavy braking. It seems that nothing can move it from from its rightful place.

Conclusion
When I started this review I realised there is not much to say about a simple device such as the  Dashboard Donut. It all boils down to: is it value for money? In Europe the price is around 25 euros. This translates to about USD32. Fortunately you don’t have to pay for the weight — even if they have real lead in the Donut…

There are plenty of other solutions out there but this one does what it is advertised to do and does it very well. My only beef is that it is a fairly massive affair, necessitated by the weight. However I think that any improvement in reducing the size of the Donut has to do with the increase in stickiness. This will allow Adapt to make smaller models which would be even better suited to the smaller European cars…

It’s no wonder that the Donut is already a big hit in Europe but for the rest of the world availability might be an issue. I know we here at Digitalreviews Network get our gadgets early on in the game and often even before they are officially released so it is not surprising that the Donut is looking for resellers all around the world.

As they say: "they sell like hot cakes… err: donuts!"