Adata microSD Trio – microSD, SD and USB in One – Reviewed 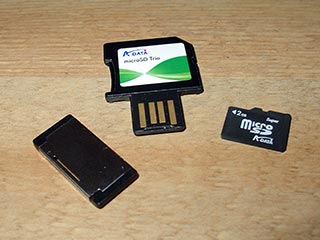 We’ve already taken a look at a number of Adata’s USB drives but this time Adata have outdone themselves. Put simply, the microSD Trio is an SD Card adapter for microSD cards; with one important difference – At the non business end, the SD Card has a small cap, which when removed, reveals a standard USB port. Ingenious!

Read on for our impressions of this clever device.

Once out of its packaging, the microSD Trio looks a lot like a regular SD card adapter except for its labelling and its floppy disc style aluminium panel at its rear. The microSD slot is located on the left hand side and the included 2GB microSD card fit perfectly: Easily removed and inserted, but importantly, remained firm once in place.

It’s only after you take a closer look and remove the rear clip that Adata’s Trio shows off its party trick. Like the microSD card, the rear cap slides off easily and reveals a USB connector. Again, Adata have taken care to ensure the cap fits snugly with two little clips on the underside to keep it firmly in place. 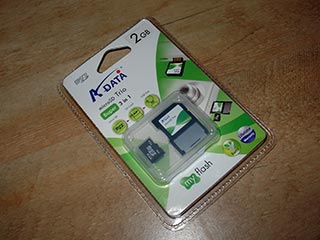 The adapter’s USB performance was fairly average for these kinds of devices and demonstrated read speeds averaging 8332KB/s and write speeds of 5133KB/s. While this isn’t stellar by any stretch, our no-name USB micoSD card reader performed marginally worse – using the included 2GB Adata microSD card.

Overall, the microSD Trio is a good idea, well executed. The only concern we had initially was how well the USB end cap would fare when inserting and removing the Trio from an SD card slot. In our tests, the two clips holding the cap in place proved to be up to the task and not once did the Trio split apart on removal from even the tightest of SD card slots.

At $12US the Adata microSD Trio (with 2GB microSD card) is a handy addition to your portable storage arsenal. For more information about the microSD Trio and the uprated microSDHC Trio reader, visit the Adata website.