DigitalReview has the pleasure of being the first to review the Astone H200 Go Full HD Android Smart TV Box.

Yes it is quite a mouthful but it is the first Android powered media gate that we have gotten our hands on, courtesy of our good friends at Astone.

To be honest, the term media gate does not actually describe the unit.  It is a full Android OS device (sans cellular telephony), effectively an internet enabled device that could replace the need for a traditional PC where complex computing is not an requirement.  That old PC you kept around so the kids can play on it and destroy to their hearts content?  You could be looking to throw that out.

Body
The build quality of the Astone H200 is good, with a combination of gloss and matt plastic body and a textured metal fascia.  It feels solid in the hand and everything fits together just right.

The power button is tucked away on the left side of the H200 next to a SD card slot and USB host port.  The back of the unit has a standard VGA port, power input, AV component, HDMI, RJ-45, 2 USB port 2.0 and an optical port.  Lastly on top is a 2.5″ SATA HDD dock that is compatible with Seagate GoFlex 2.5” Portable HDD.

Soul
The heart of the H200 is a ARM Cortex A9 1.0 GHz processor and 4 GB of internal memory.  The processor is definitely not the latest or greatest given that it is an (implied) single core Cortex A9, particularly in light of the imminent release of products with quad-core processors.  The amount of internal memory is pretty good for what it is, and the SD card slot allows for easy expansion.

What is disappointing though, is the that Astone chose to use Android 2.2 – aka “Froyo”.  I would have thought any version of Android 2.3 “Gingerbread” would have been a given.  Whilst not all of the features in Gingerbread would be directly applicable to the H200, there is speed improvements, better application management and download manager that would have been beneficial.  Additionally Gingerbread also improves on the ability of apps to run from the SD card, although 4 GB of internal memory caters for a lot of apps!

In Action
The H200 was easy enough to set up, acting like any other media gates that I have reviewed in the past.  I did have to make the initial video connection via AV component, set up the video to HDMI auto and a reboot before it would work on HDMI.  Slightly annoying but far from show stopping for me, this may stop an average user though.

There is a custom Astone launcher giving access to Movie, Music, Gallery, File Manager, My Applications, Browser and Settings from the home screen.  The customisation is barely skin deep though as the rest of it operating system looks pretty much like stock standard Android with the exception of a wallpaper in the My Applications screen.

Without fanfare I threw everything at the unit, starting off with a 10 GB high definition video streaming over a 100 Mbps network.  There was no issues at all with streaming the video at maximum bitrate.  There was a stuttering issue the first time but I could not reproduce it so I am putting it down as an anomaly.  External HDD needs to be NTFS formatted in order for the device to be able to read the file system.

Aside from the media functions, the advantage of the H200 over a traditional media gate is that it is a fully fledged Android device along with all the application support from the Android Market.  My review unit came pre-installed with apps such as Angry Birds Rio, Cut the Rope, QuickOffice Pro (Trial) amongst others.  With a bit of tech savvy it would not be too hard to fully personalise the device.

The caveat to conquering the world of course, is the standard remote control is limited to navigating around the system and well, you cannot play Angry Birds with it.  In fact you cannot really navigate around applications once you have launched them with the remote.  On the bright side though, keyboard and mouse support is built into the OS and I could replace the remote control with my iPazzPort which makes the remote redundant.

Gripes
As I have mentioned earlier, I am disappointed in the choice of Android 2.2 “Froyo”.  Whilst Ice Cream Sandwich (v4.0) would have been ideal, I expected that a variant of the 2.3 Gingerbread releases to be de rigeur.

The level of customisation of the device is virtually non-existent.  There is a huge missed opportunity to make the user experience a bit more polished and friendly to the uninitiated.

The remote control does not facilitate using the H200 to its fullest.  It requires optional accessories in the form of a wireless keyboard and air mouse for that (or any USB keyboard and mouse).

There was no manual in my device, though admittedly mine came as-is for review. 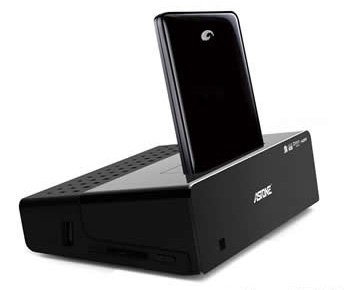 Conclusions
Despite my misgivings over the hardware and software choices made by Astone, the H200 is actually a very competent device particularly at this RRP.  Primarily as a media gate it handles a pretty full list of codec.  The key issue will be the CPU’s ability to cope with the newer applications.  I am assuming of course, that Astone will see fit to upgrade the OS to at least Gingerbread where app support is less of an issue than with Froyo.

The Astone H200 Go Full HD Android Smart TV Box is available for AUD$129, the optional N300 wifi dongle is AUD$29 and the Astone R2 mini keyboard is AUD$49.  Currently there are several dealers bundling the wifi dongle free with the player purchase.  A list of retailers is available here.