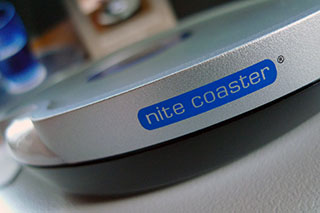 The Nite Coaster is a clever little device that makes navigating your way through your bedroom at night a breeze. Hang on.. what?

Read on for our review of Beacons’s bright idea for the night.

Firstly, let’s end the suspense: The Nite Coaster – as its name somewhat suggests – is a plastic drink coaster which includes a built in night light. While this is a cool idea in and of itself, the Nite Coaster goes one step further by activating its light via a built in motion sensing panel. Neat.

The Nite Coaster’s design is both neat and functional with its top made from a slightly rough textured silver plastic and its bottom fashioned in a relatively smooth black.

As one would expect, the coaster’s top is water resistant and it has a half centimeter lip around its outer edge to prevents any accidental spillages. 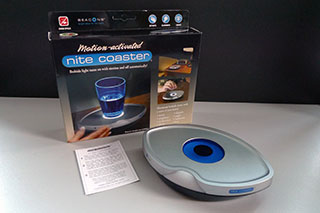 In the middle of the coaster’s silver top is a translucent blue circle which lights up when it detects movement. Once movement is detected, a soft blue light illuminates for 25 seconds before automatically turning itself off. Cleverly, the Night Coaster automatically switches off its illumination when it detects ample ambient light.

This cleverness also allows the 4 AAA batteries (not included) to power the unit for around six months.

We’ve had the Nite Coaster on our bedside table for a while now and have found that it functions perfectly, consistently detecting movement up to two metres away from its position. In our time with the unit, we found the blue light to be very easy on sleepy eyes. It’s also worth mentioning that we didn’t notice (or more importantly wake from) any incidental illuminations caused by any natural sleep movements.

The only real negative we could take away from our experience with the Nite Coaster was that if a mug or otherwise sizable solid object was placed on the coaster, the illuminating circle could be completely obscured, resulting in diminished or no illumination. Having said this, glasses of water looks fascinating when illuminated on the Nite Coaster with other small objects such as glasses, being easily identified under its light.

Overall, the Nite Coaster is a great idea which does exactly what it claims on the box. Despite the obvious appeal to the older or vision impaired individual, the Nite Coaster’s functionality and neat design is just about cool enough to sit on anybody’s bedside table.