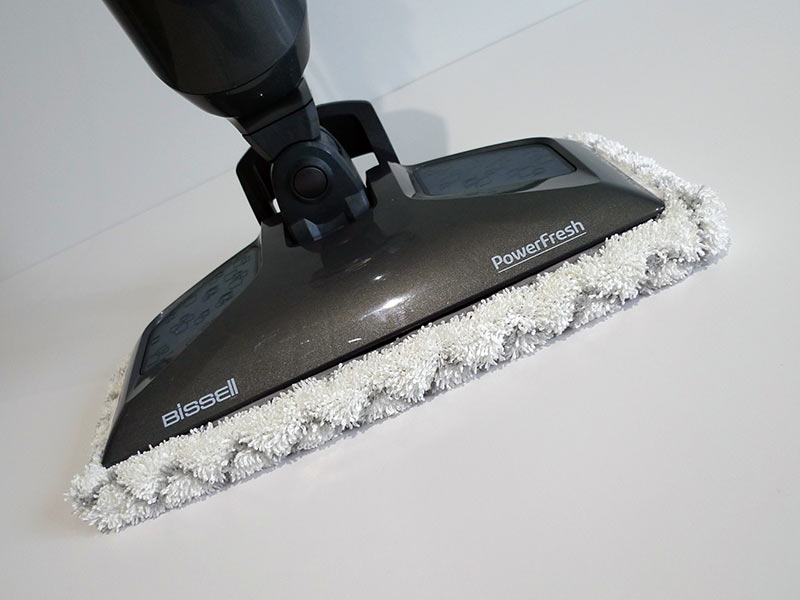 Now we haven’t seen any official figures but we’re pretty confident mopping is one of the least liked cleaning activities. The mop. The bucket. The slush.

It’s no surprise then, that Bissell think there is a better way: Enter the Powerfresh 1440 Steam Mop.

Having been suitably impressed with Bissell’s clever AirRam cordless vacuum cleaner, we were keen to see Bissell’s take on the good ol’ mop. 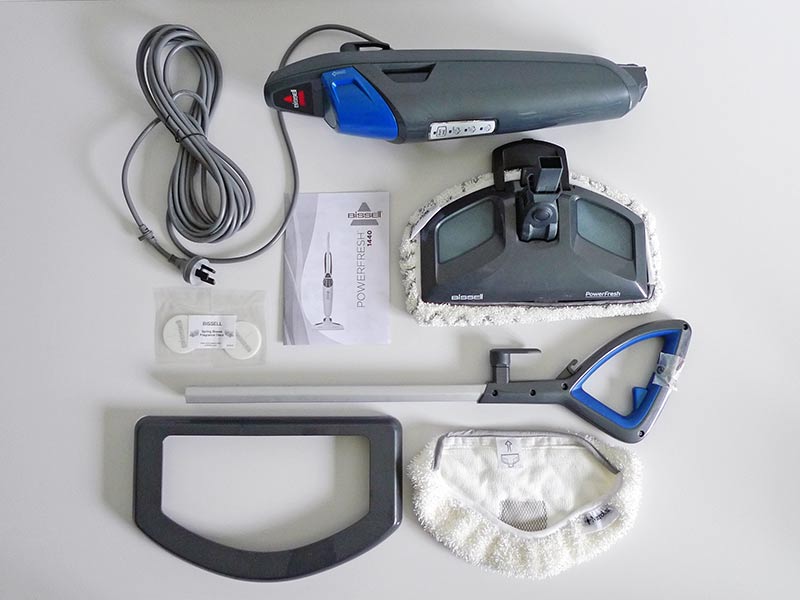 On the front of the Powerfresh are four LEDs – One to indicate the unit’s power/readiness and the other three to indicate what level of steam is being provided. The steam level is selected via a button located just under the power LED. Just above these these LEDs is the blue removable water tank. The handle rises up above this, culminating in a neat closed triangular grip. The grip is rubberised on the inside and provides comfortable access to the Steam-on-Demand trigger.

The rear of the unit is mostly unremarkable other than a cable wrap mechanism which features a clever quick release lever. This lever allows all of the Powerfresh’s 7m power cable to uncoil quickly and easily.

The mop head itself is only 55mm high, 185mm long and 325mm wide, the Easy Scrubber not withstanding. Coupled with its highly manoeuvrable joint, the mop head’s dimensions allow it to get into most any space. At the back of the mop head is the Easy Scrubber which is designed to add additional scrubbing power, particularly for getting at small crevices, grout and stubborn stains. And the Easy Scrubber is easily engaged or disengaged with just the press of a foot.

The two Mop Pads included are made from the same material, but their design is slightly different. One is all white and uniform while the other has a zig zagged light grey trough for tougher jobs. Both pads are fully washable and according to the manual feature Microban antibacterial product protection. 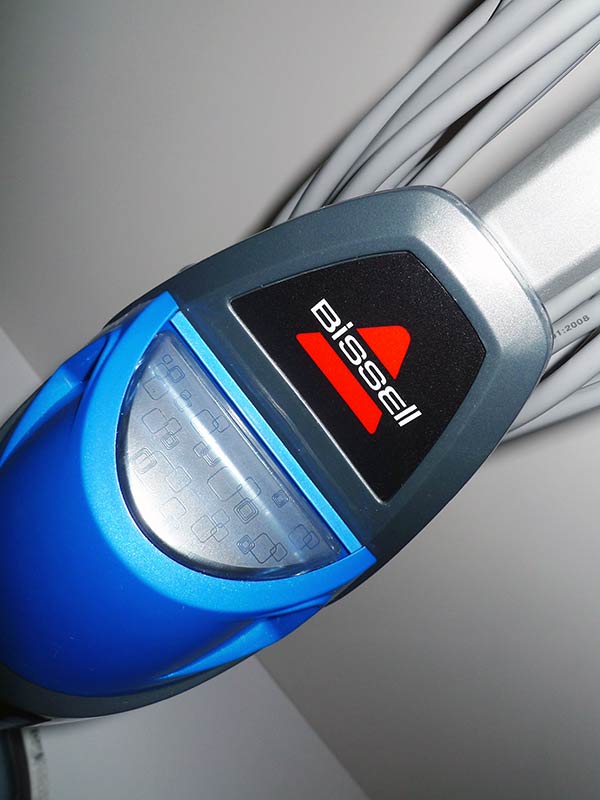 To get started we slipped half a fresher disc into the regular mop pad (there’s a small pocket on the pads inside), filled the water tank and plugged the Powerfresh into the wall outlet. The water tank holds about 400ml of water. While Bissell recommends using distilled/demineralised water, we went with the regular tap variety as most folk undoubtedly will.

Once power is provided, the Powerfresh dutifully flashes its blue power LED for about 30 seconds while it warms up. After this warming up period, the power LED becomes solid indicating that the Powerfresh is ready for action.

After taking hold of the handle and depressing the Steam-on-Demand trigger, we were mopping. 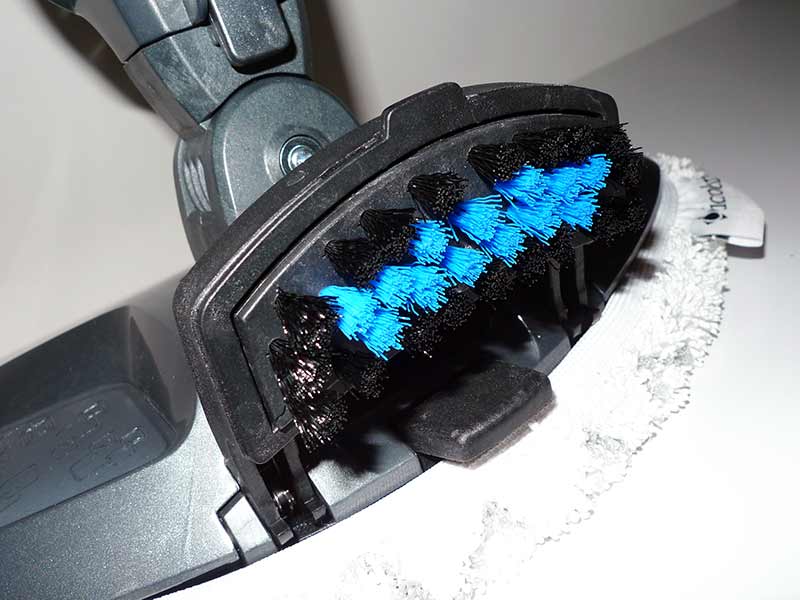 Over a four week period we put the Powerfresh to the test on ceramic tiled flooring and found it to be excellent. While it goes without saying that the Powerfresh was easier to use than the traditional mop and bucket, on our ceramic tiles, it really did clean well. And unlike a regular mop, there was no streaking at all.

When in use, the Powerfresh glides around pretty effortlessly and the Steam-on-Demand trigger was largely comfortable to depress. While the lazy in us would’ve liked to have some kind of latch to keep the trigger depressed, the safety implications probably make this a non-starter.

Engaging the Easy Scrubber was as the name suggests, easy. The mechanism locked into position with the press of a foot and really did come in handy on more stubborn areas. The Scrubber worked well on dried up muck but we found it less effective on grout stains, which would be our only genuine complaint about the Powerfresh. 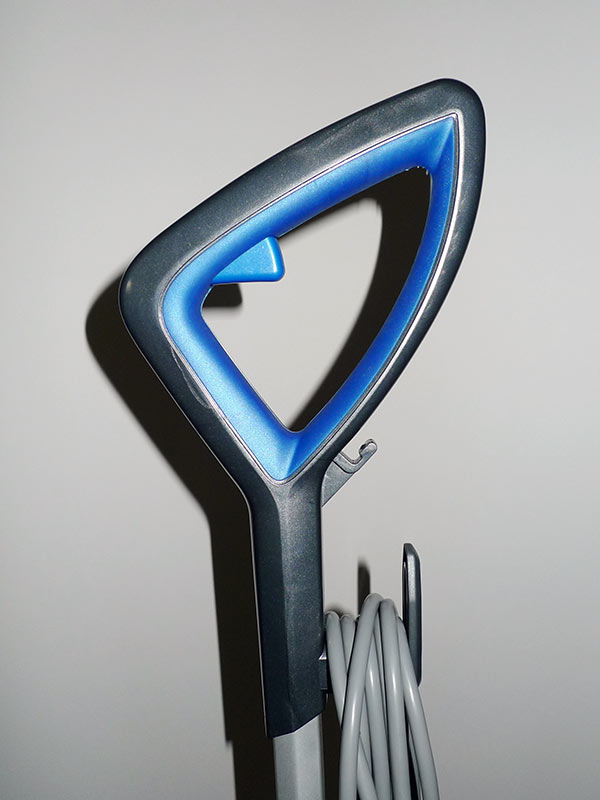 The swivel head proved capable of moving the Powerfresh under low lying furniture and all the tight spaces our 15 square meter testing area could provide. Working the Steam-on-Demand trigger generously (on the low steam power setting), the Powerfresh required under two full tanks of water to complete the job.

After being Powerfreshed, the ceramic tiles came up a treat. Also worth noting was that the tiles dried a lot quicker than they normally do after traditional mopping, and as we mentioned earlier, without any visible streaking. 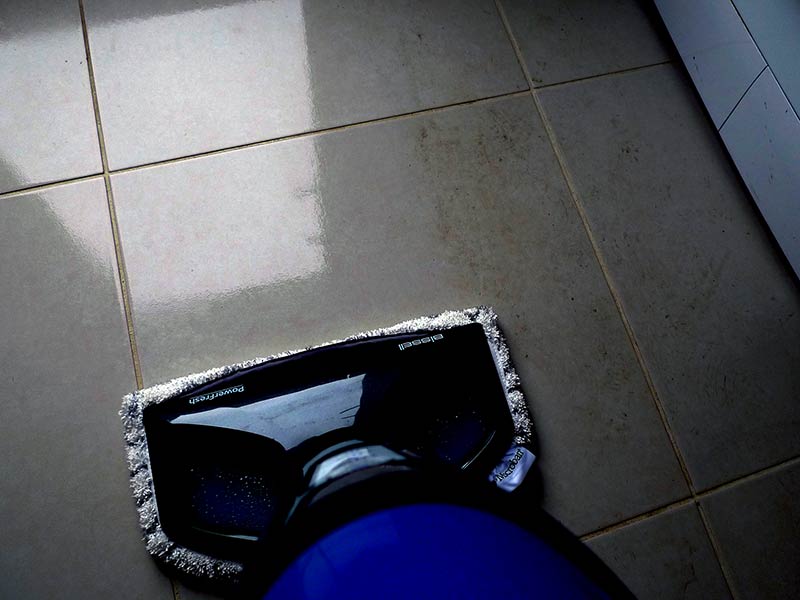 We also gave the Carpet Refresher Attachment a run on our cut pile plush carpet and found it to work well enough, gliding along as we steamed. Truth be told, we weren’t really convinced with the idea of “refreshing” carpet and much prefer to properly deep clean carpet, if we are going to go down the steaming route.

We also found the 7m power cable was ample and liked how it coiled up neatly when not in use. Once dry, the Powerfresh can be stored upright on its own, err.. steam, and like the AirRam before it, the Powerfresh has a neat and minimal footprint.

We think Bissell are definitely onto something. We found the Powerfresh to be easy to use and effortlessly provides excellent results. After a run with Bissell’s steam mop, the ceramic tiles we cleaned looked freshly laid. And because of the no chemical steam approach, the tiles dried very quickly and without any visible streaks. 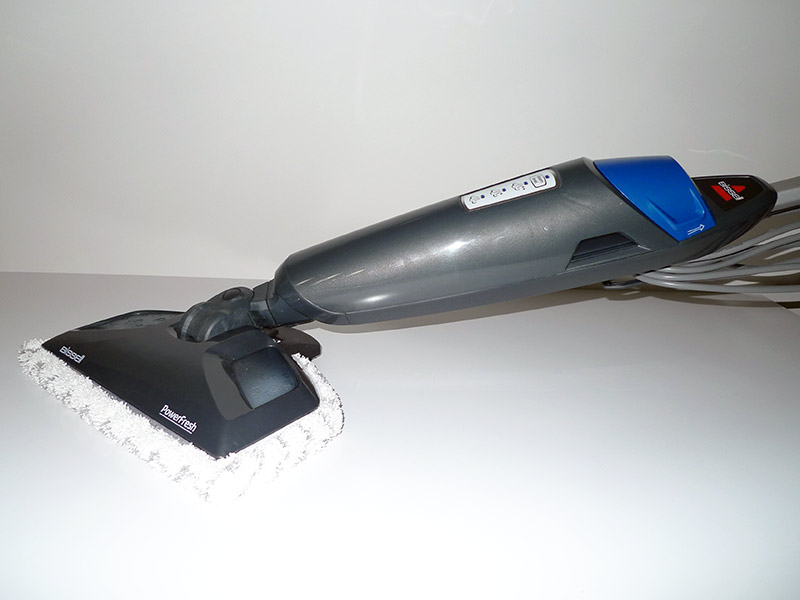 While we would’ve liked to see a slightly larger water tank and perhaps a Easy Scrubber that allowed deeper scrubbing, we thought the overall package was excellent.

The Carpet Refresher worked as described and the overall build quality of the Powerfresh was good.

The cord was an ample length and while we have been spoilt with the cordless Airram, it appears cords are still a necessary evil for steam mops – At least until Bissell works out a way to make a cordless steam mop!

The Powerfresh Steam Mop is designed to clean most hard floors like vinyl, laminate, marble, stone and sealed wood floors and is available now for a recommended retail price of $269AUD.

For more information on the Powerfresh 1440 and Bissell’s other products, please visit Bissell’s website.