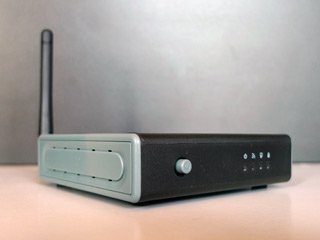 While Microsoft have released their own official 802.11n wireless adapter for XBOX 360, MadCatz have quite literally built a bridge and got over it.

Read on for our review of the MadCatz 802.11n Wireless Gaming Adapter.

The MadCatz Wireless Gaming Adapter (WGA) might achieve the same result as the official XBOX 360 wireless adapter, but on the whole, it is a very different animal. Where the official wireless adaptor connects via USB, the MadCatz’s WGA connects to the XBOX 360 as a wireless bridge via the ethernet port. Not only does this mean Microsoft cannot sequester the use of this device, but perhaps more importantly, the MadCatz WGA can be used to connect virtually any Ethernet equipped device to your existing wireless network.

To this end, the "for XBOX 360" label MadCatz has ascribed the device is not only superfluous but in essence, is actually underselling the Wireless Game Adapter’s functionality!

The WGA comes with everything you need to get up and running. Along with the unit itself, a short length of Ethernet cable is included along with a 9v power adapter. An 80mm CD-ROM, quick start guide and multi-language manual round out the included content.

The WGA itself is quite small at 94 x 100 x 25mm (not including the antenna on the rear) and is finished from matte dark grey and light grey plastics. The front face of the unit has a small push button power button along with four LED indicators. The rear features a removable antenna, an Ethernet port and 9v power port as well as two pin hole buttons for reseting the WGA and initiating WPS connections, respectively.

Like most users, we started with the Easy Setup guide and went for the push button Wireless Protected Setup option. Unfortunately, after a number of attempts we couldn’t get the WGA to play nice with our router. This isn’t completely surprising as the WGA isn’t the first wireless device that our router has spurned under WPS, so after a few curses, we went for the trusty manual setup.

After another quick look at the included setup guide/manual, we got back to work: In simplest terms, setup consisted of connecting the WGA to our PC, setting the PC’s Ethernet IP to a static 10.10.10.10, followed by opening Firefox and browsing to http://10.10.10.254. This brought up the WGA’s web interface where we were able to configure the WGA so that it could connect to our wireless network.

The web interface is fairly easy to navigate but with no help or documentation to explain the settings, is rather daunting. While we were able to find where to insert our network’s settings with relative ease, the web interface is peppered with an inordinate amount of esoteric configurable items.

After saving the entered settings, disconnecting the device (and re-entering our PC’s original Ethernet settings), we were effectively connected to our WPA2-PSK 802.11 G/N network using the WGA as a wireless bridge.

Obviously, our main concern was how the WGA performed as a wireless bridge for our XBOX 360 and in all our testing we noticed no discernible disparity from our regular wired solution.

Throughout our time with the unit we noticed no dropouts and the lag was minimal and consistent with what we had experienced when connecting via a wired connection.

As we have explained earlier, the WGA was not only able to connect our XBOX 360, but also other Ethernet enabled devices. As a quick and completely non-scientific test, we ran the WGA against our MacBook Pro’s internal 802.11N network adapter and found that not only did the WGA hold its own, but in repeat tests it even outperformed the Apple machine!

Our informal tests were performed back to back with the WGA/MacBook Pro being placed approximately five meters away from our Wireless N router, with no line of sight. timing was done via stopwatch. Figures represent time taken to tarnsfer a folder containing 88 items for a total of 281.7MB. Lower is better, obviously.

Now we’re the first to admit these tests aren’t very useful other than to suggest that the WGA at worst, seems to hold its own against common notebook 802.11N hardware in certain circumstances.

Also worth noting is that once configured, we found the WGA to have no problem connecting to both visible and invisible SSID networks.

While many will automatically purchase the Microsoft offering as a matter of course, depending on your needs, the Wireless Gaming Adapter may be a better (and ironically cheaper) solution. If you can handle the manual setup, the flexibility to use this device with devices other than the XBOX 360 (either now or later down the track) makes the MadCatz wireless bridge worth serious consideration.

The Wireless Gaming Adapter is available from the Gameshark store in either black or white for $79.99US.