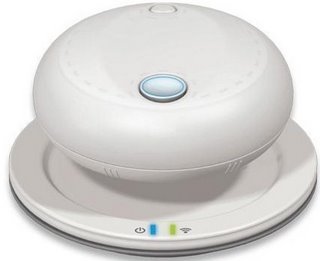 A mouse that lets you scroll through pages of information, or whatever else it is you need to do with an ordinary scroll wheel, without the hassle of moving your index finger (and instead moving your entire hand..)

Read the full review on the Cyber E Sport Orbita Mouse by Mark Wilcox below.

On sitting down to write this review I have noticed something. There is no other word that I can think of that means ‘mouse’, other than the dull and technical sounding ‘pointing device’ which I think better sums up a finger than the trusty, little blocks that we use so often they have become extensions of our hands , requiring little or no thought  in their operation. In fact, before this week I can’t even remember the last time I had to look at a mouse to make it do what I want since I upgraded from roller ball to optic- and even then I only had to look so as to examine how much inexplicable gunk had built up on the ball to stop it rolling smoothly.

This week- the week I have been playing with Cyber E Sport’s latest release, however, was different, even from the off when all I had to do was open the box I felt a little overwhelmed. There is a LOT of stuff in the packaging. A whole lot. Papers, instruction manuals, a CD, a shorter instruction manual for the impatient, a carrying pouch I never intend to use, the charging dock and, eventually- after finally making my way into the innards of the package, the mouse it’s self. As a seasoned computer user, who has so far never had trouble using mice before (is the plural mice? Maybe it’s ‘mouses’ for computer ones- who knows- I have genuinely spared little to no time thinking about this kind of stuff before writing this review), considering the leap from standard mouse to Orbita being akin to the easy to work out difference between those old style mice with three buttons and no scroll wheel (what did the middle button even do?) to the touchpad on laptops I made when I was younger and had no difficulty with, despite being very different to use, I decided to sack off the instructions and work it out myself. 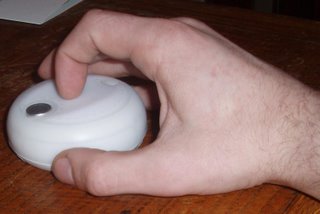 That, it seems, was a bad idea, as this gadget requires a fair amount of studying before you are qualified to use it. Oh- and you have to charge it for three hours and calibrate/orientate it first, a fact I learnt from the enclosed quick start manual after my initial experimentation sent my curser spinning wildly around the screen and receiving an array of electronic screeches.

It looks good. I can’t fault Cyber E Sport for that. Sitting there on its dock it looks almost like a miniature, silicone covered wedding cake with an ominous cycloptic blue eye pulsating away gently. It certainly grabbed the attention and positive accolade of anyone who wandered into my room, especially when it lets you know it has charged (by three little beeps). After having it correctly calibrated and orientated (with help from the manual,  which is very concise so takes little time) everything works fine, although I do think the mouse is a little on the small side so my hand has to rest uncomfortably next to it, not having wrist support, it feels very odd having my wrist against the table, and the idea of placing the left mouse button as the entire top of the mouse is confusing and impractical, as automatically you rest your fingers around it, like you would a normal mouse, and have to move your entire hand to click on it, though this does come more naturally with practice. The right mouse button (or left if you so choose, as you are able to switch them) is less easy to master- so much so that I still haven’t. The right mouse button is in fact one button broken into two and shafted to the sides of the mouse. It’s odd, especially as I seem to be constantly pressing the button at the join, achieving nothing, and on clicking it correctly with your thumb you need to squeeze it tightly with your little finger on the other side, which is uncomfortable, or you will find that the curser slips upwards, missing whatever it is you were trying to right click on. The right and left mouse buttons, however- despite their odd construction, are just support acts to the headliner of the Orbita mouse… the scrolling function.

Yes. The scroll wheel on the standard mouse that we all know and love is the central design to the Orbita. Few of us would choose to go back to the old days without a scroll wheel, where scrolling down web pages means moving the mouse an  inch and clicking on the ‘down’ button, or using the wild stab in the dark that is ‘page down’, but surely that’s done and dusted with the ordinary scroll wheel- right? Not so, say Cyber E Sport, who have made it so the ENTIRE top half of the mouse rotates in order to achieve scrolling, not just both up and down, mind you, but also sideways (provided you find the appropriate button and hold it, which – frustratingly doesn’t work on Word, but is VERY useful otherwise).

So what did I think after a week of using it? I certainly wouldn’t go as far as to say it was a bad idea- because it’s not. It is very clever, and there has obviously been a lot of thought and work behind it- especially as you have the option of letting it scroll at your command even when you are holding it mid air (not that I can imagine a situation in which you would) and it’s particularly satisfying if you want to scroll to the very top or bottom of a page by whizzing it pretty hard and getting there in a split second- but there is very little middle ground when it comes to scrolling shorter distances. When I first read about this mouse, I imagined it to be like the iPod’s click wheel device, allowing for endless scrolling. It is. I just didn’t think that it wouldn’t be very useful. Putting your finger on top and using it like a click wheel mimics the iPod scroll perfectly… but that’s not what you want from a mouse. You either have the option of unlimited scrolling in this method, but no access to the rest of the mouse functions unless you move your entire hand (which, if done too heavily has the irritating feature of either accidently clicking one of the buttons or knocking the scroll function sending you away from where you just scrolled to) or rotating it bit by bit with your fingers hovering round the other buttons… just as you would with the scroll wheel on a standard mouse, making you question why you need to change from one in the first place.

I should admit that I don’t think this mouse was designed for me, as scrolling isn’t a particularly large part of my computer experience. The Media release and much of its advertising revolving around its advantages in Audio/Visual editing, 3D modelling and PC gaming- none of which I actually do… but I don’t believe that a new way of scrolling is going to revolutionise those industries, especially as for general computer use the Orbita mouse can get quite annoying.  The mouse’s circle shape, for example, means it doesn’t really feel like you are ‘pointing’ at anything on screen. A fact I imagine some of my fellow reviewers will make into a pun revolving around the word ‘pointless’.

Perhaps most telling is how I never unplugged my other mouse during this review period, which has been over a week now. I never felt comfortable enough with the Orbita to dispense the need for my standard mouse, which- in the rather gushing media release from cyber-E-Sport, the CEO of the company Daniel Voros calls ‘comparably outdated’. The standard mouse is an old design, yes, but one that works, and not one I believe needed changing. 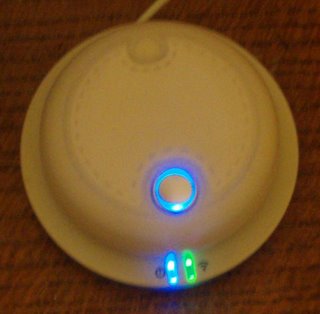 In summary, the Orbita mouse is a very clever piece of kit, with a lot of technology and ideas in one silicone covered dome but not something I see catching on, as it’s just not necessary. A lot of people- such as myself- will never have realised the shortcomings of the standard mouse design, and certainly won’t be prepared to shell out an ‘introductory price’ of $98.50 (USD) in order to set off more convenient scrolling of large documents against the hassle of adapting to a new and at times uncomfortable interface. A rather stark example of the Orbita’s clever engineering falling short against the mouse being unnecessary can be found on page nine of the instruction booklet, where it talks about the mouse’s method of avoiding your mouse being hijacked by others through the wireless connection if there are other Orbita mice being used in the vicinity by allowing you to ‘uniquely connect your Orbita to its Base Station to avoid interference.’ Good idea, Cyber E Sport, but in all honesty I don’t think the chances of more than one person within wireless range actually feeling the need to buy an Orbita mouse are high enough to make this a particularly common problem…

So, overall, I’d rate the mouse to be 5 out of a possible 10. It looks good, and COULD be useful if the interface wasn’t so uncomfortable. Personally though, I wouldn’t spend the amount they are asking for it just to find out there was nothing wrong with your last mouse anyway.