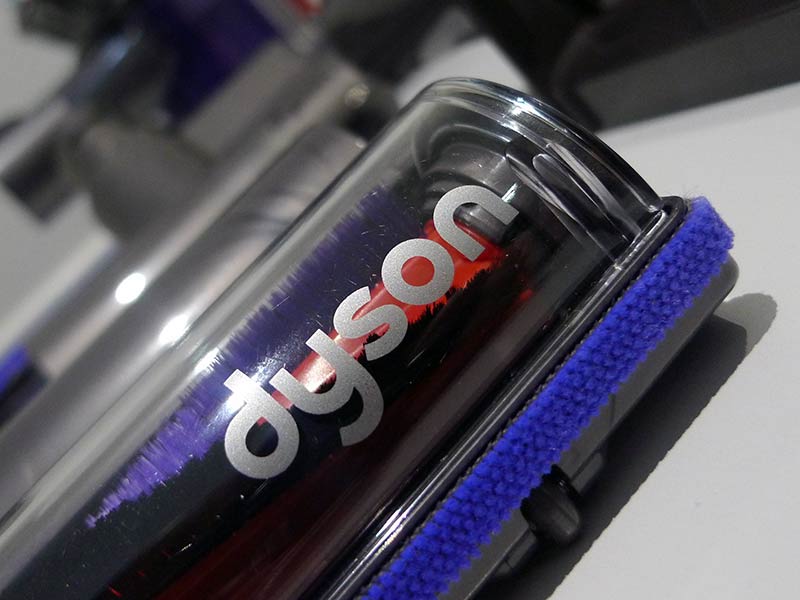 The new DC59 Animal is the latest incarnation of Dyson’s futuristic range of hand held vacuum cleaners. While Vacuuming is still far from our favourite pastime, when it involves the latest technology and razor sharp design, we’re more than happy to roll up our sleeves and do some, err.. vacuuming!

Read on for our review of the Dyson Digital Slim DC59 Animal.

Last year, we looked at Dyson’s clever hot+cool air multiplier but the last time we looked at the Digital Slim handheld range was way back in 2011 when we reviewed the DC35. Released last September, the DC59 Animal is Dyson’s premier hand held vacuum. 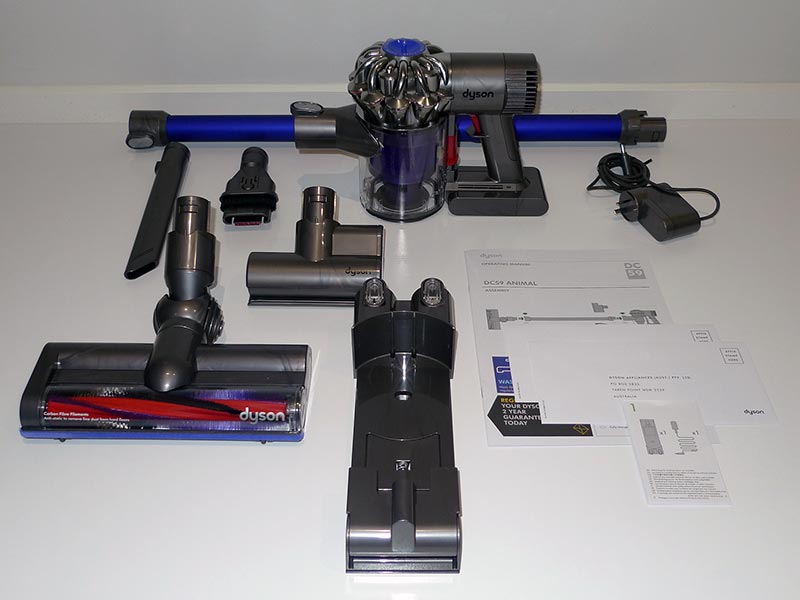 Beyond the understated branding, the DC59 Animal’s futuristic design and colour palette make it immediately recognisable as a Dyson. Beyond the unit itself, the DC59 Animal package contains a smattering of attachments and accessories, including a large motorised head with carbon fibre filaments, a mini motorised tool, a combination accessory and a crevice tool. Along with a charger, the DC59 Animal also comes with a wall mountable docking station, a user guide and some pre-addressed envelopes for guarantee purposes.

Each of the accessories is detachable and allows the DC59 Animal to be configured as either a cordless upright or compact hand held and as expected, all included tools and accessories felt sturdy and durable. 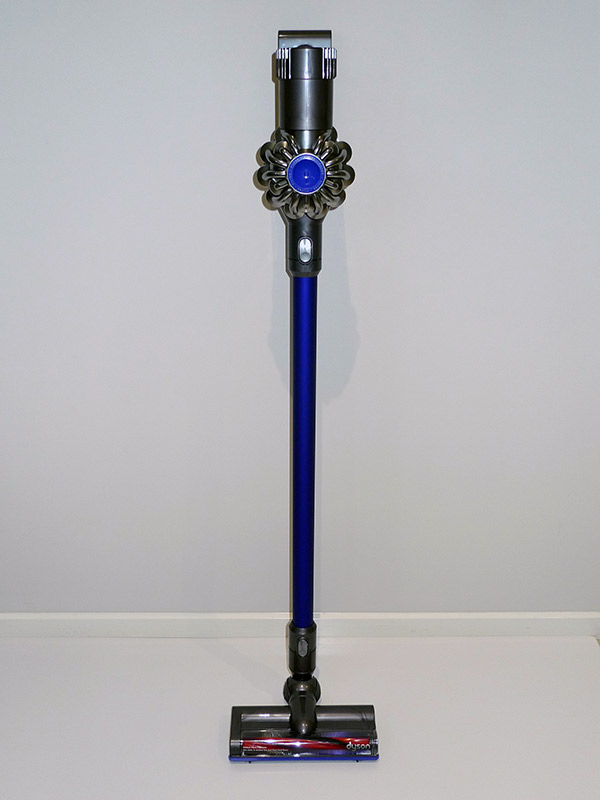 While the chrome coloured two tier radial cyclone system was an obvious visual clue, the reality is that visually, the DC59 Animal’s general look and feel doesn’t stray far from the proven Handstick formula.

While the two units are visually similar, the DC59 Animal’s new filter removal system – now located in the middle of the two tier radial cyclone enclosure – does give a clue to some fairly major internal changes.

This new filter removal system is much simpler than the previous implementation and now requires no more effort than a pinch of your fingers to remove it. 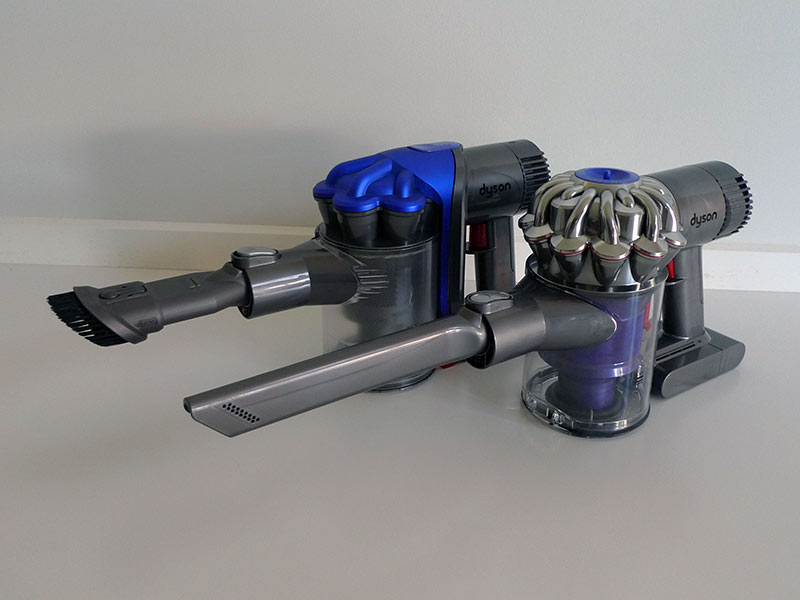 The DC59 Animal also features an upgraded power system, dubbed the Digital Motor V6 which is rated at 350w and spins at a ridiculous 110,000 RPM!

The included motorised head is lighter and features a self-tightening mechanism to keep the brush bar stable. It also continues to feature a combination of carbon fibre filaments and nylon bristle strips. And while it isn’t an upgrade, Dyson’s continued inclusion of felt strips around the motorised head to avoid damaging furniture and skirting boards, is a welcome touch.

While the battery is no longer a removable item, it too has been upgraded to deliver greater power for longer usage times.

During our time with the unit, we put the DC59 Animal to use as the sole vacuuming appliance for a 29 square home. The home included both ceramic tile and cut pile plush carpet surfaces with an approximate 50/50 distribution. Beyond routine vacuuming, the portable nature of the DC59 Animal also made it the go-to for minor spills and incidental clean ups. 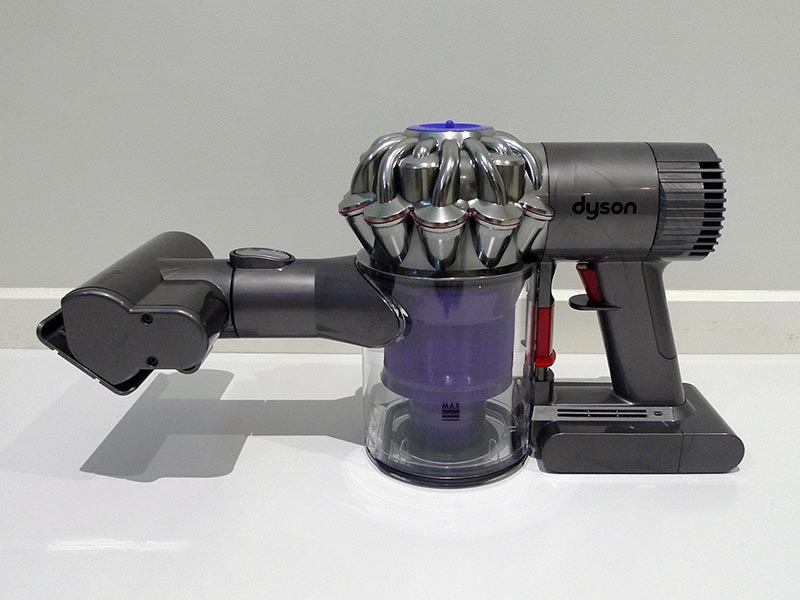 sing the DC59 Animal was as easy as select the right tool for the job, connecting it and pressing the trigger. While we mostly used the motorised cleaning head for regular tiles and carpet duties, we often switched to the combination or crevice tool for smaller spills. The mini motorised tool proved handy for furniture and also when vacuuming cars – both seats and floors.

Changing tools was easy and over the few weeks we tested the DC59 Animal, we encountered no problems with the press-button and click-in system. The only negative was that the DC35 tools were slightly different to the new DC59’s connections, so that they did not fit the new machine.

With the extension wand and large motorised head attached, the DC59 Animal easily took over the role of a regular corded vacuum. The size of the unit along with the ball articulated motorised head made the DC59 Animal highly manoeuvrable and its general weight and shape made it comfortable during extended use. 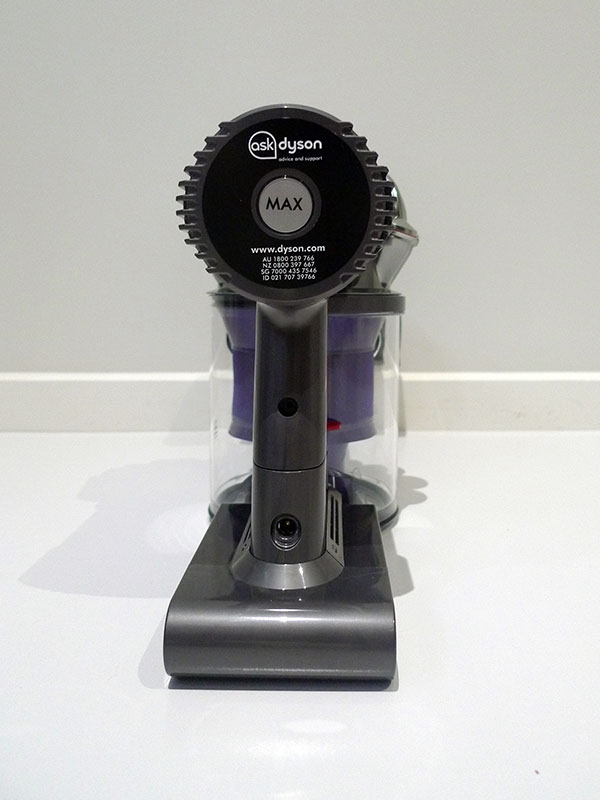 The battery took around three and a half hours to fully recharge after use and a full charge lasted us just under or over twenty minutes, depending on how hard we pushed the DC59 and whether a motorised attachment was used or not. With the motorised head tool attached, we found the DC59 Animal manual’s 17 minute runtime figure to be fairly accurate, give or take a minute or two.

When using the non motorised crevice and combination tools, we found the unit lasted a few minutes longer. While using the “MAX” mode to increase the unit’s suction, it drastically reduced the DC59 Animal’s runtime. The additional boost provided by depressing the “MAX” button worked well on more stubborn spills but given the unit’s excellent suction in regular mode made it somewhat superfluous. When in “MAX” mode the DC59’s runtime maxed out around 6 minutes, irrespective of the tool attached.

When the battery approached depletion, the blue lit ring around the “MAX” button begins to flash for a about a minute before the DC59 Animal stops sucking. Beyond the blue illuminated “MAX” ring, two handle mounted indicators indicate blue during regular operation (and charging) while also able to flash red to indicate a fault. We can happily report, we didn’t witness this during our time with the unit. 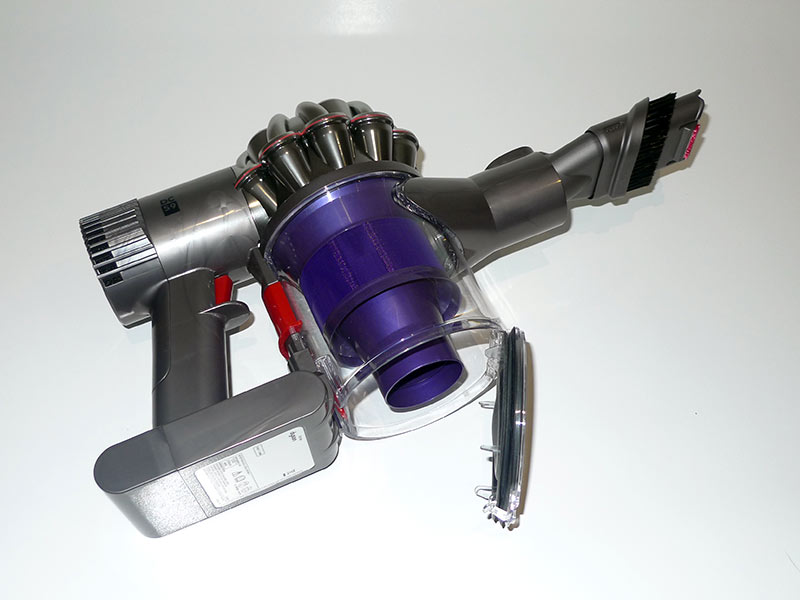 The DC59 Animal handled both plush pile carpet and ceramic tiles equally well and unlike the previously reviewed Bissell AirRam the DC59 Animal happily vacuumed our large spaghetti rug without much fanfare.

While the DC59 Animal was slightly louder than the old DC35, it was much quieter than the AirRam and for our money seemed to suck with greater purpose – particularly on tiles. Also, unlike the AirRam, the DC59 Animal coped with Spaghetti carpet relatively well, which the aforementioned unit could not.

Where the DC59 Animal really came into its own was when we attached the crevice or combination tool (along with the extension wand) and used it overhead to suck up cobwebs and even the odd eight legged friend. The fact that Dyson’s Handstick design is equally at home working overhead as it is squeezing into tight crevices and even as a regular upright vacuum, is a testament to its versatility.

Of course, to facilitate this versatility, Dyson has obviously had to compromise with the DC59 Animal’s runtime and its dust bin capacity. Both of these compromises seem to have hit a sweet spot however, in that the run time and dustbin capacity complement each other quite well, considering the unit’s portability.

To this end, we found the DC59 Animal’s dustbin was large enough to handle most spills, although after a full twenty minute vacuuming session in a particularly dusty area, might require a mid session dustbin emptying. 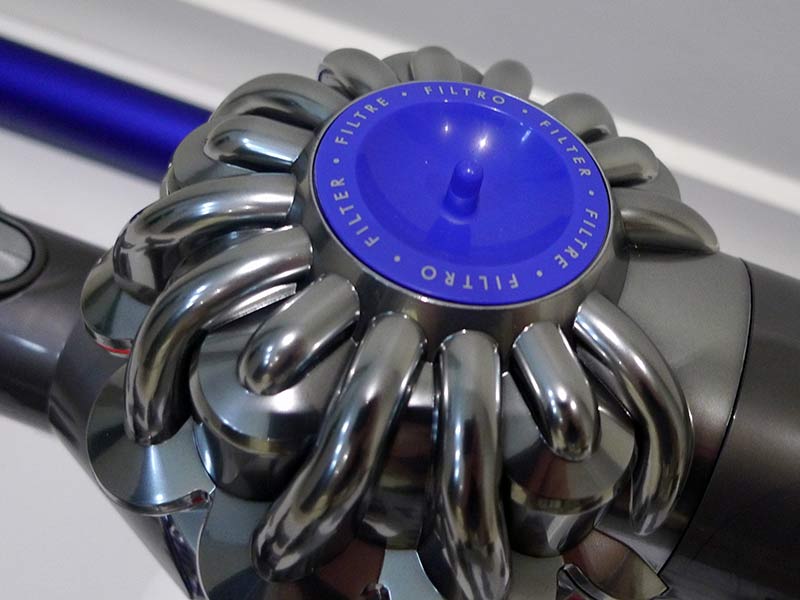 Irrespective of the surface, we found the suction to be excellent. And by excellent we don’t mean excellent for a portable, we mean excellent. While our old DC35 still sucked as well as it ever did, when using the DC59 on the same surfaces, it seemed to pickup a lot more. It’s also worth noting that during the three years that the DC35 stayed on at DigitalReviews, it never missed a beat.

The DC59 Animal is a fully featured portable vacuum cleaner that is able to hold its own with traditional corded vacuums – For twenty odd minutes at a time, at least. The units suction was excellent and its versatility was second to none. 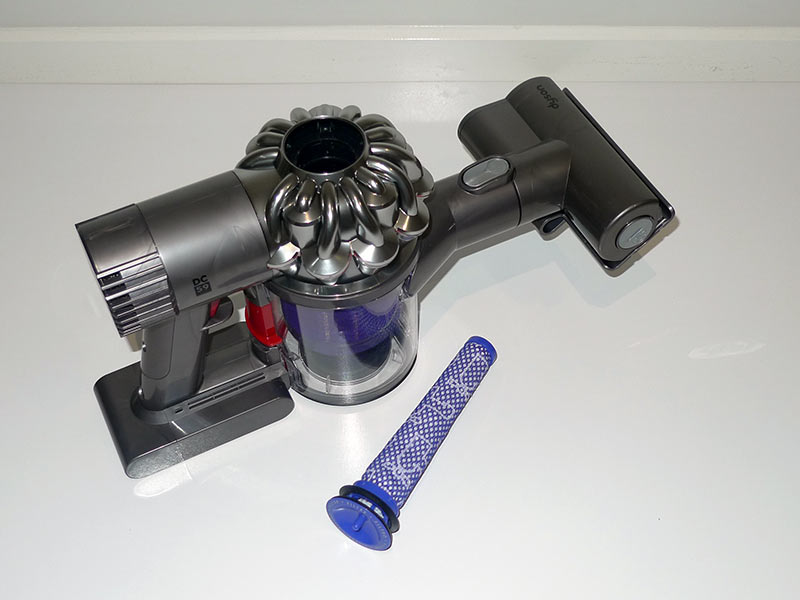 While we found the DC59 Animal especially handy for every day spills (and smaller jobs like cleaning the car), its runtime and suction was sufficient to allow it to be used as a traditional upright to clean at least half a 29 square home with ease.

While we understand that adding increased battery life would compromise the unit’s delicate balancing act, we can’t help to wish Dyson would offer the ability to quickly replace the battery for extended use or at the cost of some of its charm, perhaps even provide the option to tether the DC59 Animal for corded use.

In 2014 however, the DC59 Animal is as good as a cordless gets: The DC59 Animal looks great, performs well and is a suitable improvement over the previously reviewed DC35.

The Dyson DC59 Animal is available now for a recommended retail price of $649 from major retailers across Australia. For more details, including where to buy, please head on over to Dyson Australia’s DC59 web page.