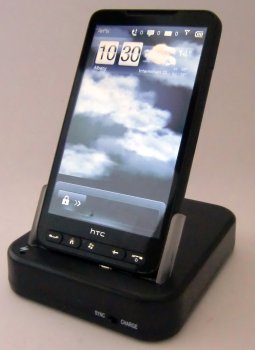 Following up on our earlier mini reviews of some essential accessories for the HTC HD2, we received a bunch of goodies from Clove Technology in the UK.

These are a capacitive stylus, a sync charge cradle and silicon case.

Let’s first have a quick look at the special stylus that you need to have when you deal with capacitive touch screens. A normal tap with a reasonably pointy object or even your fingernail will not work with these screens as a successful click depends on some electrical discharge between your finger and the capacitive screen underneath the glass. I really had to get used to not being able to use a normal stylus, particularly because I used to take a lot of hand written notes. And also because some of the programs are still not optimised for finger use only. You notice that particularly when you have to click a tiny box on an option screen. I must say that now that I have learned to live without a stylus I really do not want to go back to having to use one. It is a stopgap measure until such time as every program for these types of screens will be finger friendly. This will be the case when Windows Phone 7 will make its entry into the real world later this year.

I had a quick look at the Dibber stylus from Proporta when they sent it along with one of the cases we reviewed last time. Emphasis on "quick look" as it was a pretty useless device: the rubber tip was fairly stubby and it was difficult to get a positive response when you use it. It certainly is not made for sliding actions! But then again, neither is this special capacitive stylus from HTC. It really is only for pinpointing and clicking on tiny things. To that end you have a flat plastic circle, not even a centimetre across, with a red dot in the middle. This allows you to line it up accurately. It also means you have to hold the stylus at a certain angle but it is not a problem. It works fairly well once you have the hang of it but it is not easy to see why it works…. Black Magic, I suppose…. ?

The whole stylus is fairly lightweight (15 Pounds is what it costs, not what it weighs!) and it has a rather fragile clip on it. It’s not something you would carry around all the time but only if you have to do some fiddly work. This does not include handwriting, unfortunately.
This is one of these items that, if you can live without it, you should. I think I’d rather do some more hunting and pecking to get it right with my stubby fingers than to fiddle around with a stylus of any kind. Just hoping that most software will become finger friendly in the very near future.

I have similar mixed feelings about the necessity of the sync charge cradle. The idea is cool: rather than having your phone flat on the surface of your desk you have it neatly cradled whilst at the same time it is being charged or synchronised. If you use your phone "commando style", in other words naked, without any case, you’ll be okay. But if you have to pry your phone loose from any protective case you’ll soon tire of it and just use the sync charge cable that came with the phone. When you slide in the HD2 it sits very snug. A bit too snug in fact: you have to almost force it onto the connector, using both hands. The other problem is that you can either charge or sync the phone but not both at the same time! That does not have to be a real problem but handy is something else….

Another thing you have to be aware of is that this device is shipped from the UK where they have these monstrous wall plugs! That’s fine if you live there I suppose but not everyone has a UK adapter lying around. I do, but I couldn’t find mine for a long time, adding to the frustration. It really would be useful if these things ship with a universal plug that is easily interchangeable.
Where an accessory like this really shines is when you have it on your desk basically all the time. Then you can leave it plugged in and only take it out when you’re away from your desk.
I’m only at my desk for short periods of time throughout the day so it doesn’t quite work for me.
Additionally, I have my phone in a hard silicon case which gives a better grip and a little bit of protection. The soft silicon case that Clove sent along slips on easily but it is a little bit too flexible for my liking. Mind you, these things are very cheap so it doesn’t hurt to order one in and see if you like it.

The nature of these accessories is such that you can’t write more than a couple of paragraphs on these items as they are so simple and self-explanatory. The only other thing you want to know is the price and where to get them. The cradle is just GBP12 plus VAT. Clove Technology is your one-stop shop for all accessories no matter what phone. And they also do phones and netbooks. Pay them a visit here.

Our next accessory review will be the Boxwave Armour Case in case you want full body protection for your HD2.