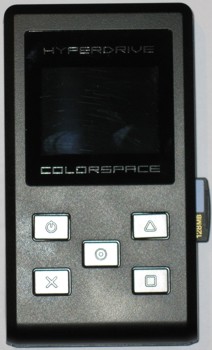 Hyperdrives are in my mind synonymous with Han Solo and the Millennium Falcon.  The Hyperdrive Colorspace is not going to make the Kessel Run in less than 12 parsecs, but it is claimed to be the fastest device for memory card backups on the move.  Thanks to the folks at Hyperdrive, DigitalReviews gets the opportunity to strap in and take it for a spin.

First Impressions
The Hyperdrive Colorspace is a device designed to fulfil a very specific role.  This role is to facilitate the fast and reliable backup of memory cards whilst in the field, unencumbered by the need for a computer.  For that very reason the form factor of the Colorspace is barely larger than a 2.5" hard disk drive. 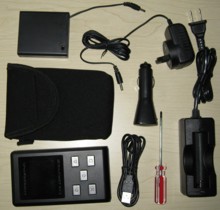 The package that the Hyperdrive Colorspace arrived in was very comprehensive.  You could see the determination that Hyperdrive has put in to make their product as portable as possible.  Besides the Colorspace itself, there is:
* USB cable;
* AC adapter;
* car charger;
* AA battery external power pack / charger;
* external battery charger;
* soft carry case;
* screwdriver;
* two spare screws; and
* user manual.

The Hyperdrive Colorspace comes with a 2.2" TFT screen with 320 x 240 resolution.  It is not the largest portable screen around but it is a reasonable size for the device’s operation and navigation.  The screen also allows for image review which is no worse for wear than the average digital camera.

The maker of the Hyperdrive Colorspace could not have made the operation any simpler.  The start up of the device takes around 10 seconds, upon completion the main menu mirrors the five push buttons located beneath the screen.  Each button is clearly marked with an unique symbol and their respective functions are clearly identified on each menu.  It is clear, concise and intuitive.

To backup a memory card, simply insert the card into the appropriate slot and press the Backup Button.

Test Run
Having freshly returned from an overseas trip, my memory card was bursting with happy snaps.  Despite wanting to jump straight into using the Colorspace, I took the prudent course of action by backing up (yet) another copy of my card.  There is never enough backups for precious, non replaceable data.

In comparison, the Hyperdrive Colorspace took 12 minutes 56 seconds to perform the same task.  This averages around 4.81 Mb/sec which is a far cry from the claimed 25 Mb/sec.

Additionally I tested using a multi-card reader which took about 10 minutes 56 seconds to copy the same data set.

At this stage of testing using my SDHC card, the Colorspace is no where near the claimed 25 Mb/sec transfer rate.  This is not particularly surprising as my card is only a Class 2.  Without doubt the best possible speed would be achieved with the Sandisk Extreme IV Compact Flash cards.  However, in my case the Colorspace is the slowest of the three methods I used to back up my photos.

I also had a chance to test the Colorspace with a Compact Flash (133x) card with RAW images from a Canon 30D.  Given the native speed of the CF card, the Colorspace managed a transfer rate of almost 7 Mb/sec.

Backup Process
I really like the one button backup process (after power on) and the process is quite detailed.  The Colorspace provides a wealth of information on what it is doing at any time, aside from displaying thumbnails of the images on the fly, the current file name, target folder, transfer rate, total number of files and size, elapsed time and remaining time are updated constantly.

With a little pre-configuration, you can set up a number of options with respect to the backup process.  These are:
* visual – display thumbnail from either hard drive (post-copy) or card (pre-copy);
* speed – fast, hyper, ultra or normal (depending on card type);
* folder – default or input,
* verify – off, full, auto or quick (1 in every 32 bits).

At the completion of the backup process, the Colorspace provides the option to Shutdown, Erase, Browse or Back (previous menu).  In my case, the device notified me it detected an error on my memory card and provided an option to scan the card.  More on this later.

Browsing and Search
The Colorspace have a function which allows for browsing the internal hard drive or memory card, the latter works even without copying the files first.

As for the search function, it is simply brilliant.  The Colorspace first prompts for the location you want to search, either the hard drive or a memory card.  Next it prompts for a year and month to be specified, after which it will scan the source location, and display the number of photos that matches the date in a calendar format.

Connection to PC
It is a breeze to connect the Colorspace to a computer.  The device has a standard mini USB port and a cable is provided.  The Colorspace is not a card reader and the manufacturer stresses this point.  This is a decision undertaken in order to maximise the transfer speed of the device.  However once the cable is connected, you must press the USB button to start up the connection.  I guess this feature is for power saving.

Power
The device is powered by an user replaceable generic 18650 lithium ion battery.  To replace the battery will require removing the single screw and opening up the back of the Colorspace.  There are numerous methods of keeping the battery charged and ready to go as indicated in the shipping package earlier.  There is the standard AC adapter, USB, car charger via USB, external 4xAA battery pack which can perform double duty either as an external power source or to recharge the internal battery, or the external 18650 charger.  That really covers all bases to keep the Colorspace ready to go!

Further, I have noticed that the power management algorithm on the Colorspace turns off the hard disk when it is not required to conserve power.  Manufacturer claims that up to 120 Gb of data can be copied on a single charge.

Some useful utilities are bundled into the Hyperdrive Colorspace.  Two particularly useful and welcome tools are Card Recovery and Scan.

Despite best efforts and care, I personally have had to go through the pain of recovering images that were accidentally deleted.  Having this feature built straight into the Colorspace is an extremely savvy move.  The Card Recovery successfully recovered test images that I deleted from my SDHC card.  Whilst it was not the fastest product I have used for this type of use, it definitely serves the purpose.  Besides when you are in the field without a computer and all the necessary software, this is going to a godsend.  The recovered files are stored straight onto the internal hard drive with a RECV prefix.  It is important to note that the Card Recovery feature will only recover image files.

Card Scan is another utility that is bundled into the Colorspace.  The menu provides two choices: Quick Scan and Standard Scan.  This is where there device has a "gotcha".  The Quick Scan is faster but destructive, the Standard Scan is much slower but non-destructive.  The difference is clearly stated in the User Manual, and if you select Quick Scan, a warning is displayed before any action is taken.

Firmware updates are a breeze.  You simply download the latest firmware from the Hyperdrive Colorspace product page, copy it onto the device hard disk.  From the Colorspace you select the Firmware menu, browse to the update file location and select the file.  The screen will clearly indicate what it is doing and when user intervention is required.

Other Features
If you are that way inclined, the User Manual provides full documentation on customising the display of the Colorspace.  All wallpapers and buttons can be changed. 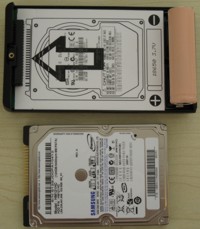 Gripes
There were a number of issues that I encountered during the use of the Hyperdrive Colorspace.  Some are more serious than others depending on your usage.

The initial copy from my memory card took the full 12 minutes or so, and at the conclusion it indicated my card has an issue.  Before I launched into the Quick Scan (which is destructive), I tried to browse the files that the device indicated has been backed up but the folder was empty.  This was despite the status indicating that the copy was complete.  Naturally this is of concern, although it has only happened once in the many times I tried.  It did reinforce the need to check that the files are actually on the Colorspace before erasing a card which is just good practice.

The other issues are more cosmetic.  I noticed the tendency of the Colorspace to indicate "2 seconds remaining" in the progress bar, but above that to say copy complete.  It is a minor issue but a little annoying as I tend to look at the progress bar and I would wait a few more minutes before realising that it is actually completed and the 2 seconds never winds down.

There are two ways to power down the Colorspace.  From the main menu there is a dedicated button with the standard power icon.  Hold it for 2 seconds and you have to let go before it will start the shutdown sequence.  If you are a few menus deep into the device, then the "X" button can be used to shutdown the device.  This time you have to hold it for 5 seconds and let go, after which the device stays on, appears to hang, but will after about 10 to 15 seconds initiate the shutdown process. 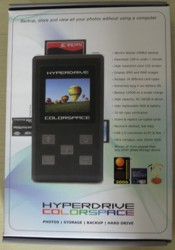 From a technical perspective, the Hyperdrive Colorspace is a well thought out, well designed piece of equipment.  It is simple to use, provides plenty of information on screen, easy to interchange hard drives and batteries.  There are umpteen number of ways to keep the device ready to go.

There were some issues that I encountered during the testing, only one of any concern which a bit of commonsense and care will no doubt will avert disaster.  The good part is that Hyperdrive releases firmwares that would no doubt address any issues over time.

For me, the Hyperdrive Colorspace will be added to my list of equipment that I pack whenever I travel.  It will serve well as a on the move backup and eliminating the need to carry a deck of memory cards and wondering which one has space.  For some trips it will replace my computer, for others it will be complementary.  As I said earlier, there are never enough back up copies for your precious non-replaceable data!  Personally taking an extra two minutes in the field to backup almost 4Gb of data is a minor trade off if I can leave my notebook behind.  Besides, I could upgrade my SDHC card to a Class 6.

It is probably not the sort of device a happy snapper would consider, but anyone who is half serious about their photography should really consider adding this to their equipment list.