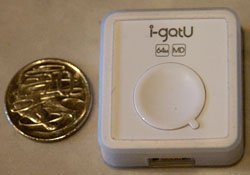 Late in 2009 DigitalReviews got to roadtest the i-gotU GT-120 USB GPS Travel Logger.  The friendly folks at MobileAction has shipped to us a newer, bigger edition in the form of the GT-600.  There are some key differences between the two so let’s get cracking.

First Impressions
The i-gotU GT-600 is about the size of a matchbox, in the same glossy white finish as the GT-120 mentioned earlier but comes in a translucent rubber sleeve to protect the device.  Again similar to the GT-120, a single large button dominates the front that turns the unit on or off and the same custom four pin port on the bottom of the unit.  The top right hand corner has a provision for a lanyard.  A feature new to the GT-600 is auto power-on during motion feature which is a great way to conserve battery life.

Tracking
Again it is well advised to download the latest @Trip PC software from the Mobile Action website first.  The software now supports up to 64-bit Windows 7 OS.  There is a dependency on Microsoft .Net Framework 2.0 which is part of the installation file.

The @Trip PC software have not changed much from the previous review.  All the function are still available and the interface looks the same.  Tracks are downloaded from the unit and plotted on Google Maps.  Photos can be also be added with the program attempting to match waypoint data to the timestamps on the image files.  In the event where the timestamps cannot be matched up, the software permits manual addition of photos to a recorded waypoint within the @Trip program.  GPS EXIF information is written back to the image file after permission is granted by the user.

From the @Trip PC software the GT-600 can be customised for your particular usage.  Features include scheduled time periods for the unit to be automatically on and logging (limit to two periods per day).  There are six predefined modes, these are walking, running, biking, motorcycling, sailing and driving.  Within each mode the logging interval can be modified and Smart Tracking mode enabled or disabled.  Smart Tracking enables the GT-600 to change the logging interval when movement is greater than a user determined velocity. 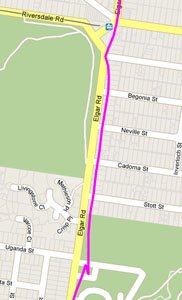 The GT-600 now can handle 262,200 records versus 65,000 in the GT-120.  The motion detection extends the battery life depending on the usage.  The manufacturer does not indicate a battery life span but it would be assumed to be greater than the 30 hours which is what is stated for the GT-120 due to the larger size and motion sensor.  The GT-600 is water resistant.

New to the software suite is the Sports Analyzer.  It can calculate the calories burn, graph altitude, distance, speed, time and pace.  Combined with the @Trip software’s mapping features, you can toggle overlay tracks from street maps to terrain or satellite views.  Sadly for me, all my sports are indoor.

Gripes
Similar to the GT-120, there is very little to complain about.  In my road testing, there is some deviation from the road (no really I didn’t take a drive through the part or plow into those houses, honest!), but it does not really detract from the overall use of the GT-600.

Conclusions
The GT-600 is a neat little device but does not present a compelling case if you already own a GT-120.  The motion sensor is a nice to have rather than a must have in my opinion, the Bluetooth connectivity option makes it more versatile to use.  That said though if this is my first purchase for a GPS logger I would definitely go for the GT-600.