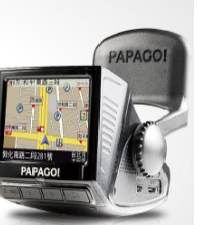 The first time I took a taxi in Taiwan I looked at the satnav device; it was a brand I’d never heard of: PAPAGO!. Then at Computex I came across a stand from PAPAGO! who obviously are very big in Asia. Their most interesting product was a video recording device for your car consisting of a small colour screen and a full HD 1080p camera that will record everything that is happening in front of you in glorious detail. Its purpose is to be a witness for your next car accident….

If that sounds a bit gloomy, keep in mind that more than 100,000 car accidents occur globally every day. I have been in three of them so I’ve had my fair share already and none of them were my fault. Yet I could have done with an independent witness to back up my side of the story. So what is this PAPAGO! P3 device like to use in real life?

You’ve seen police videos where the small dashboard cam records everything in front of the cop car. The P3 is a similar device that keeps on recording onto the 32 GB SD card and overwriting it when it gets full. The interesting thing is that whenever an accident happens, no matter how minor, that particular footage will be protected on the card and cannot be overwritten. Quite handy is also that the P3 comes with a built-in map, in this case of Australia, which is also on a protected section of the card.

Even though the screen is only 2.4 inch wide it is enough to show you the road you’re on and it also mentions the next crossroad, even though sometimes it misses one or two….

One small problem is that every time you start the car the GPS assumes you’re in the middle of the Sydney CBD, rather than keeping the last lat/long in its memory when you switch off the ignition. That would save a few minutes of getting back on track when you’d need the guidance most if you’re in a different city. Re-acquisition takes sometimes 4 minutes!

There are a number of screen displays possible: the roadmap, the actual road ahead as seen by the camera, your speed and the time. Some gimmicky extras are the ability to get warnings when you depart from your current lane but I haven’t found this a compelling feature as too many warnings were given (no, I wasn’t drunk). This LDWS together with the Forward Collision Warning System (FCWS) are touted as important safety features. You just have to be careful not to be distracted by the many warnings!

The built-in GPS and G-Sensor in my opinion are the more important features and together with the high-quality Full HD sensor which covers about 130 degrees of the view ahead, rounds off a pretty useful design. 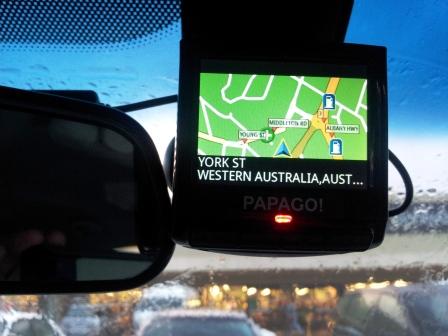 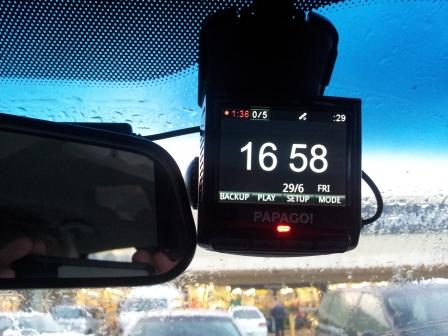 Installation
Obviously the best place for this device is in the middle of the windscreen. PAPAGO!  suggest having it right below the rear-view mirror but as it needs to be powered by 12 V continually, the lead will be hanging down from the device unless you route it all the way around the windscreen. The lead is long enough to do this. It’s a pity that they have chosen for a mini-USB connection rather than the now standard micro-USB.
The device is attached to the windscreen with adhesive. The P3 is easy to set up and all the menu keys are very intuitive.

Playback
This is the best part of the whole unit once you install the software on the DVD for replaying the recordings. Not only will you see the actual footage with the road you were on listed on the bottom with the speed and heading but also a Google map with the vehicle progressing along. In addition, the accelerometer readings are there too with the speedometer and compass!  It’s like an aircraft data recorder.  In fact I’m now also using it in the cockpit of my aircraft when I fly as it gives a good overview of the dashboard instruments as well as a reasonable view through the windscreen. We’ve been using the new ION Pro WiFi action camera on the outside of the aircraft (see our upcoming review) but I think PAPAGO! can tap into a new market here for flight recorders as well. We found the video quality reasonably good both during daylight and night time driving conditions. 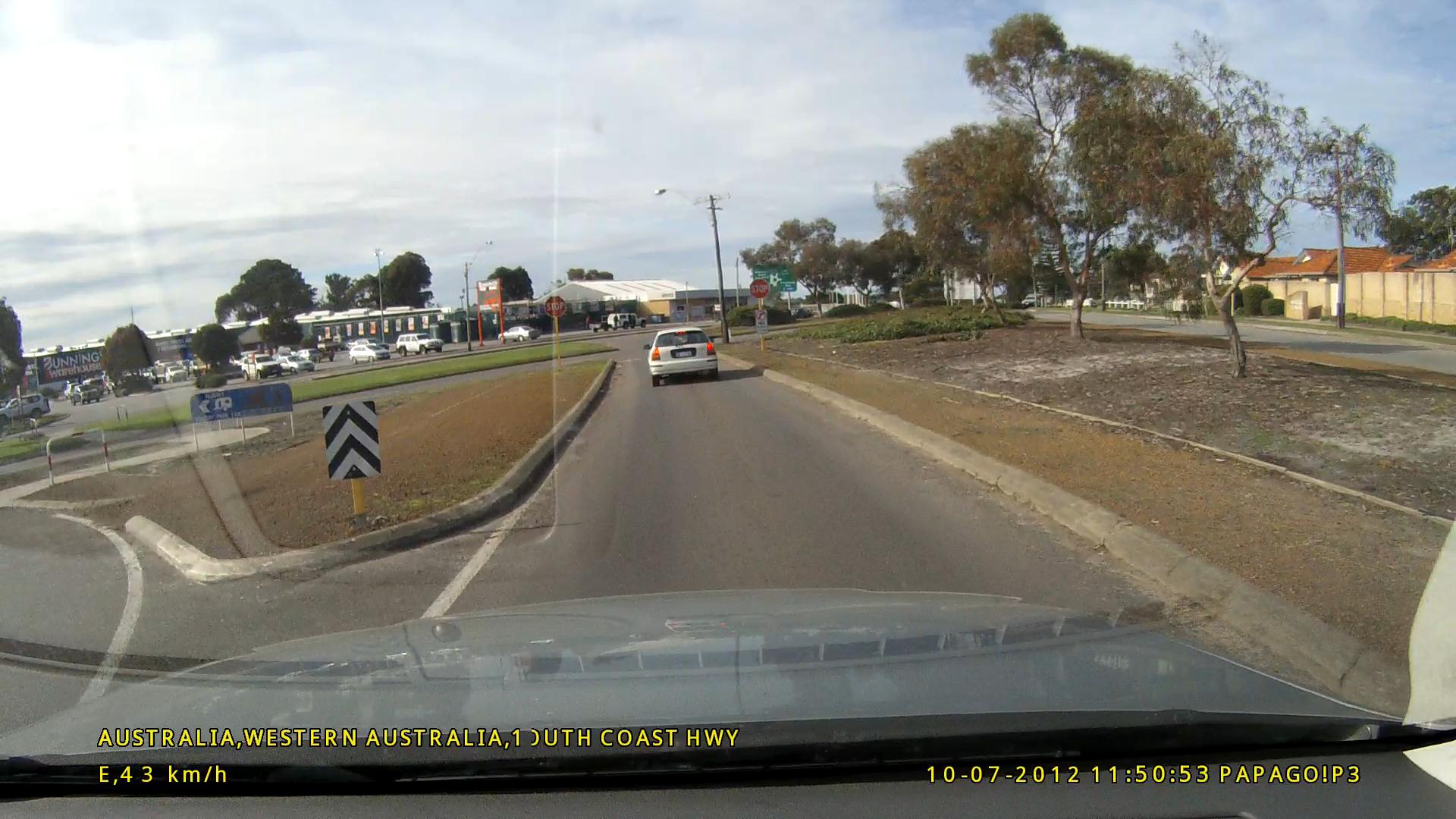 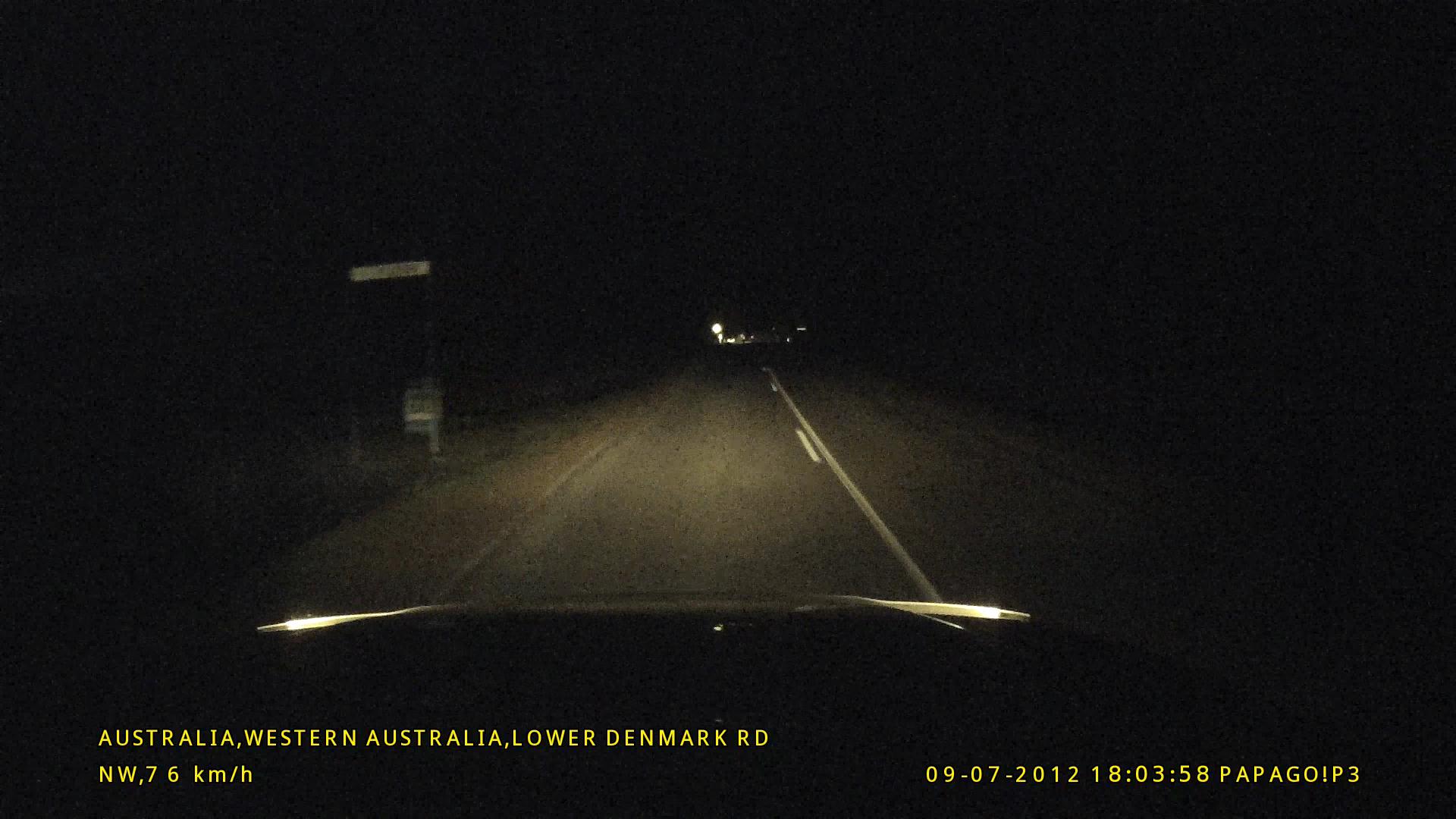 Conclusion
Whilst I absolutely believe in the necessity of these types of devices for insurance purposes I have some trouble with the installation where it needs to be. The device is fairly small and light weight but shaped like a bulky old CRT television which doesn’t give you many other installation options. Probably the best way to increase sales and utilisation of these PAPAGO! devices is to embed them in the rear-view mirror. PAPAGO!  should be able to create a device that will either attach to an existing mirror or replace one altogether. I would imagine that car manufacturers will soon implement similar capabilities into new vehicles as they have with rear-view cameras and satnavs. Which gives PAPAGO!  a small window of opportunity to get as many systems out there with an improved product. I have found it quite useful to navigate by but of course it will be immensely more useful if ever I will be in an accident and this thing has been recording it….
There’s another side benefit to using the PAPAGO! P3: knowing that everything is being recorded I tend to drive more carefully and stick to the speed limit. Yes, that is a good thing when you realize it could also be used against you…

For the price of less than USD 300 we recommend you have a good look at this car DVR. In Australia this unit will be distributed through www.laserco.net.