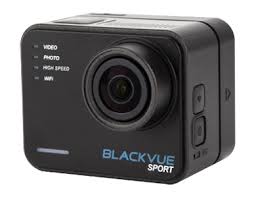 When Pittasoft announced their new action camera a few months back and offered us the opportunity to review the SC500, we knew this was going to be a serious contender in the very crowded action camera field.

We had reviewed already 2 of their dash cams and were impressed with the video quality.

Could they present anything less with the Sport SC500 action camera?

There is a tendency with action cameras to become smaller and smaller so that they can be put in the most unobtrusive places. There is a practical limit to size unless you’re talking about spy cameras and endoscopes….
I’m talking about usability: you need to have a decent sized screen and a bevy of buttons which you still should be able to press with gloves on. I think Pittasoft has hit the right balance here. It certainly is very small, tiny even. Being small usually equates to having a light weight as well which will suit the application I had in mind. Most reviews tend to focus on biking and surfing and the like but you might have seen the recent series we have here on Digitalreviews.net about quad copters. I wanted to get airborne with this little critter.

Now the quad copter we are currently flying is the Phantom 2 Vision which has its own inbuilt camera. Of late, probably due to some hard landings, the onboard camera system played up a little. Would this drone be able to lift up 2 cameras? Only if it is lightweight and the SC500 is an ideal candidate.

So let me tell you a little bit more about our new friend.
The SC500 action camera is a good-looking unit with excellent video and great still imagery.
It looks a bit more like the GoPro series in form and shape rather than some of the other sport cameras we have written about. That means there is a decent size screen on the back which is not a touchscreen by the way so all the selections have to be done with the 3 main buttons. It takes a while to figure out which does what. That LCD screen is removable which is a great feature for my application. Particularly because the camera has a Wi-Fi function which enables you to see what the camera is seeing on your smartphone app.

So any weight I could shed is welcome. I also did not use the rubber housing that comes with the system so that you can mount it on your vehicle with the heavy duty bolts. Rather, I chose a more precarious mounting system: Velcro.
Have a look at the pictures of the flexibility in mounting with a small patch of Velcro.
The camera is mounted upside down for normal flight (shown here right-side up on the inverted Vision quadcopter) 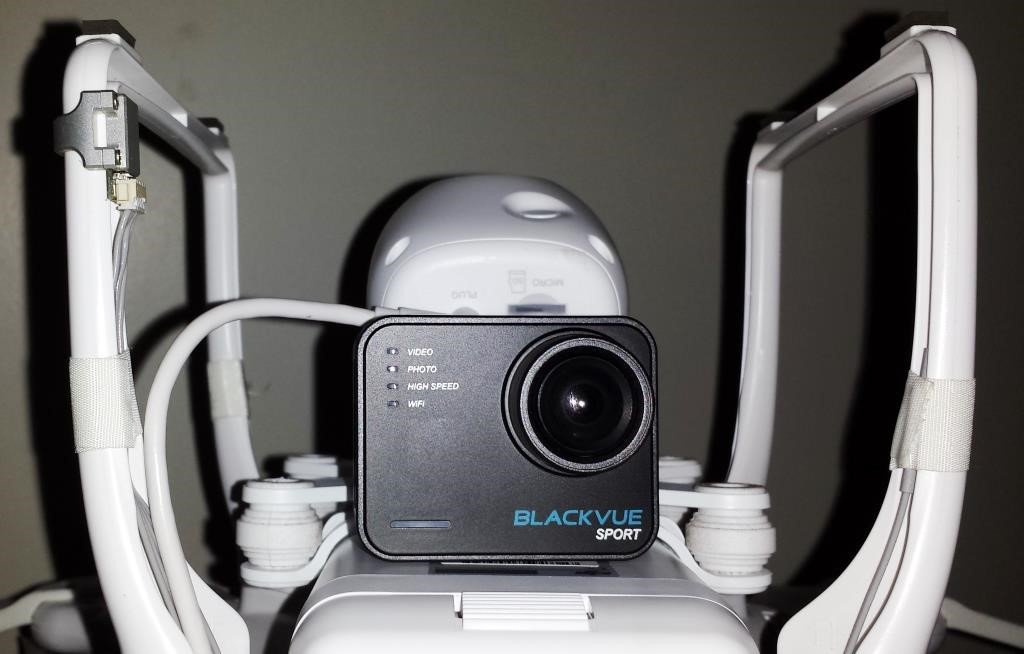 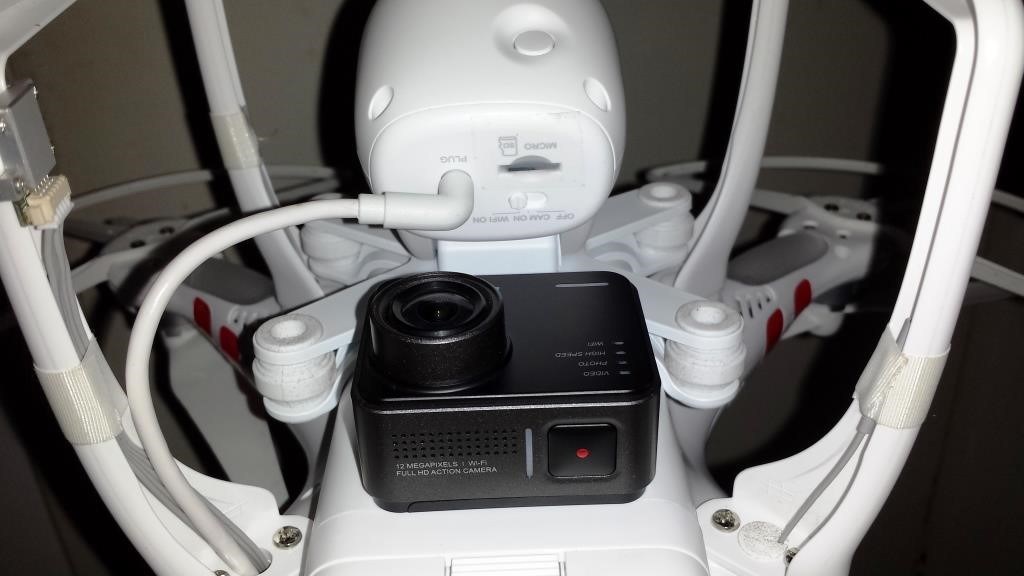 I can mount it so that it will shoot vertically (which the Vision camera cannot do) or I can shoot backwards and maybe fly backwards to get the images. In both cases I can still access all the buttons easily before flight.
In quite a number of flights I have discovered that the Velcro mounting is okay but I still do not trust it enough to let it fly over water or out of sight. The Velcro patch is still thin enough so that I can replace the LCD back with the patch in place.

Other Specifications
Any new action camera worth its salt will have to sport 1080p video in various flavours. The SC500 can do that in 60 FPS with the Sony Exmor 12 megapixel sensor. Naturally, both photo and video can be set to lower resolutions. It also supports timelapse and high-speed in 720p with 120 and even 240 FPS in WVGA.
On the side of the device will find a slot for a microSD card, the small HDMI port and USB charging port. This is covered up by a removable plastic plate which comes off all too easily (just like the lens cap, by the way). A bit of sticky tape will keep it on but it looks ugly. Of course, if you put it all in the underwater housing which came as an optional extra, that problem is resolved automatically.
Battery life is say fairly standard 2 hours. 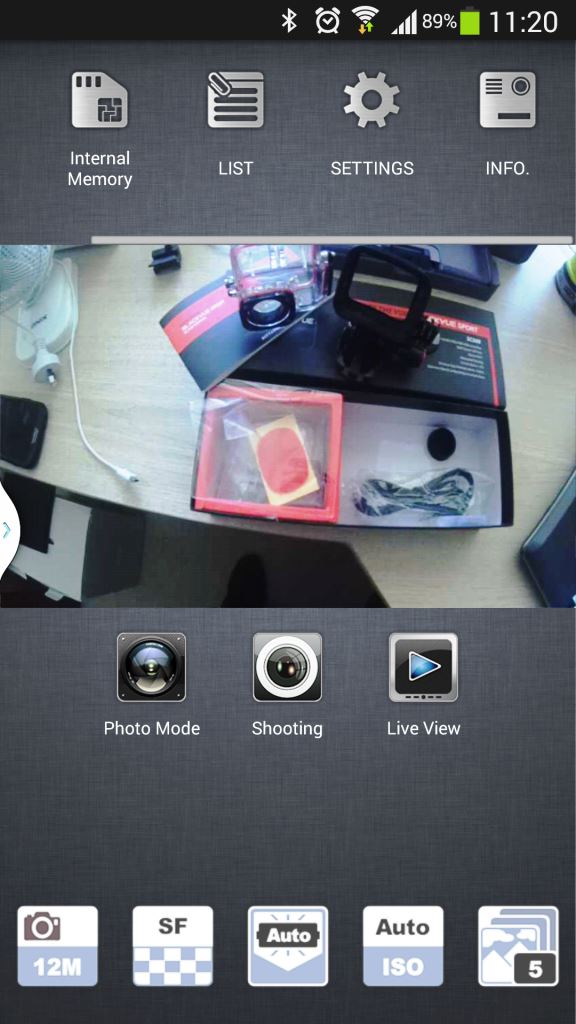 As mentioned before, the video quality is excellent and so is the still imagery. Pittasoft has chosen well in the choice for Sony as the critical component.
The SC500 will perform admirably in just about any environment you care to use it in.
The specific application I was testing it on, namely for use on a quad copter, is a bit of a niche area, and it shows great potential there.

The only problem I encountered was the lack of timelapse in the photo mode. It is present in the video mode only, which doesn’t have the same resolution as the still images. Why is this important? Any time I sent the quad copter up beyond the Wi-Fi range of the camera the shooting needs to be automatic. That’s no problem with video but I need to be able to photograph items automatically at set intervals if I cannot physically press the button or do it via the app. Now, this is a very easy solution that only requires a firmware change.
If Pittasoft creates this minor change they can count on the RC electric flying community to consider the SC500 or its successor as a great contender for their aerial cameras.

Here’s one image from above a log in my backyard shot via the app and the maximum range of its WiFi connection. The original jpg is about 6MB. This one has been resized to 50%. You can see why an interval PHOTO shooting mode would be extremely handy for the higher altitudes! 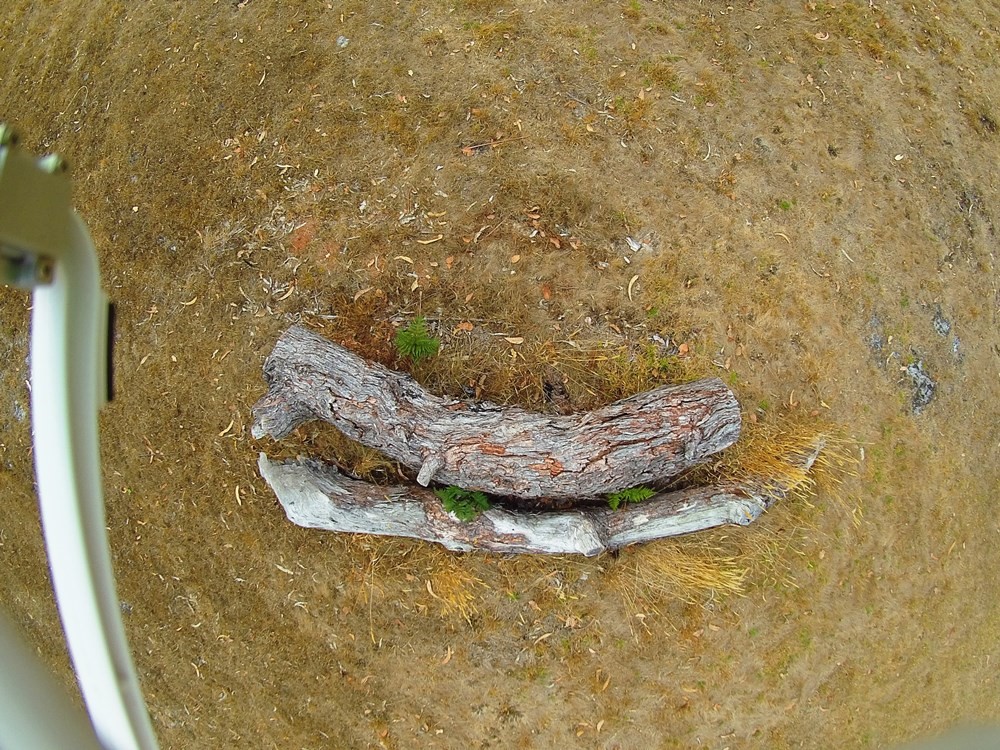 Here is an excellent action camera at a sweet price point of around $300.

Pittasoft has brought out some great gear over the past few years and the BlackVue Sport SC500 action camera is no exception. With the live view on the app, coupled with the Wi-Fi connectivity and the various full HD shooting modes the BlackVue SC500 is asking for your serious consideration.