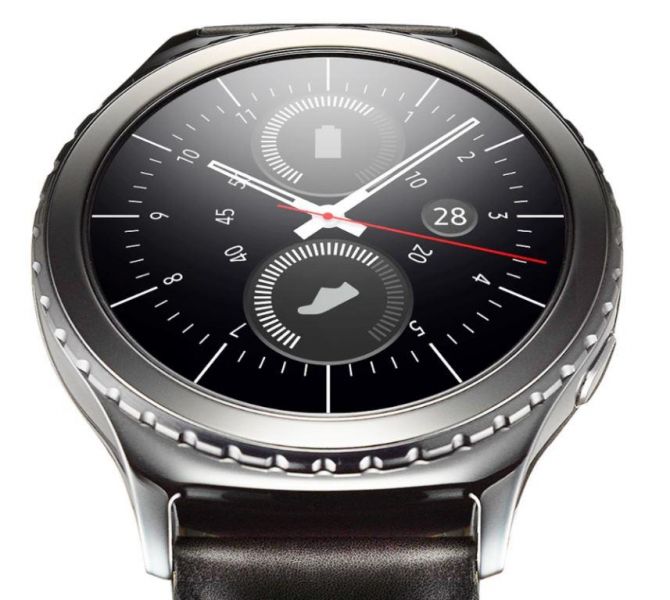 Having recently written about the original Gear S smartwatch, which was the ostentatious and very curvy SIM equipped computer on your wrist, we now go to the realm of the normal-sized smart timepieces with the Gear S2.

Our friends at MobileFun sent us the Classic version which is the slightly more expensive one which comes with leather straps and an indented rotating bezel.

This is the first smartwatch I actually care to wear all the time.

Fitting with the round dial rather than the big rectangular shape of its predecessor, the watch came in a round package with an extra half a strap…. Not sure why the whole strap was not duplicated but then again it is easy to change the straps as the watch has standard fittings.

It also came with a small but brilliant charger with a magnetic back and induction charging. The plug itself is the UK version which is monstrous. It would have been better for such an international product to have a small plug with interchangeable prongs.

First Impressions
I already had the Gear app installed and all it needed was a small 30MB update. When the apps were installed it took a long time for it to finish to the point where I just cancelled it. It appeared that they had installed properly but no notification was given that I was done.

The Gear S2 has a brilliant screen even though the resolution is only 360 x 360 (302 ppi) but it is perfect for the small 30mm screen as you can see by the second hand in the Modern Utility watch face as it glides along the screen without missing a beat or a pixel!

The watch comes preloaded with numerous watch faces from classic to modern, from digital to analogue. All these watch faces can be stylised, meaning that the dial itself can be personalised as well as the hands. A number of features (called Complications) can be incorporated in the face such as battery life, pedometer, weather, S Voice, Buddy – which is Samsung’s dialler – calendar, heart rate monitor, music, etcetera.

There are not too many apps on the Tizen platform but all the essential ones are there and more will be forthcoming.

You’ll find two buttons on the right-hand side: one is for power and the top one is the back button. The nicest feature of this particular watch is the rotating bezel which will quickly get you to the right app or help you in setting values. Being a touch screen you can also slide up or down or sideways on the face. 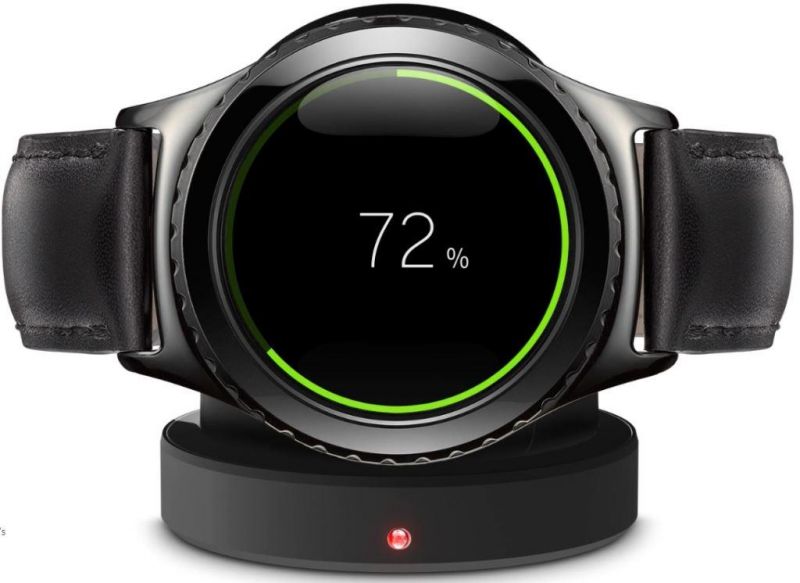 Battery life is quite decent: up to 2 days with moderate use. It is of course best to recharge it every day just to make sure and in my case I always like to leave the watch on to quickly glance at the time without having to raise my arm to trigger the watch display. When it is always on the watch has a more simplified, slightly more pixelated show of hands (without the second hand) to prevent burnout of the display.

The brightness of the display can be set from 1 to 10 which is quite sufficient for outdoor use at the highest setting and 1 to 4 are not too bright for indoor use. You would think that a watch like this has automatic brightness settings just like your phone. I haven’t found it yet and that should be easy to fix, particularly since it does have a brightness sensor!

In Use
Obviously I have not gotten around to trying every feature there are enough things that I already like to make this one a keeper. Reading the notifications that come up on your Gear S2 make it less obvious when you’re in a meeting that you are temporarily distracted.

Similarly, if you’re driving around and you have your phone in your pocket, the call notification on your watch makes it easier to answer it from your watch through the car’s Bluetooth system. By the way, this little beauty also has Wi-Fi capability!

The music app only works with a wireless headset as the watch itself does not have a speaker like its predecessor.

The small screen even features maps from Here but works off the location settings of your phone.

There is also a Find My Gear app and with the NFC functionality you should be able to use Samsung Pay. I have not tried this out yet.

Conclusion
The Samsung Gear S2 is not waterproof but if you forget to take it off while showering, no worries. It has an IP68 rating which means you can even take a bath with it… It also features Gorilla Glass 3 for added protection.

The Gear S2 is rather expensive at the official price of 599AUD , but given the great looks, brilliant interface, decent battery life and overall good functionality, it is definitely worthy of your consideration. Of course, savvy internet users will know where to get one for around the $400 mark which is a lot more palatable!

You’ve got plenty of choice in smartwatches these days and a fair bit of research to do to get the right one for you. I hope this little review will have helped in your decision-making process, but remember that our findings are pretty personal and quickly out of date after publication. Such is the fast paced life cycle of the things we think we cannot live without….

Have a look at MobileFun.co.uk and look for the latest price and what else they have in stock.