The COOKOO Connected Watch: There Is an App for That….

It’s not quite like my dress watch but rather chunky, cumbersome and connected.
Oh wait! Being connected is actually quite good as the COOKOO , just like its “real life” counterpart in some European clocks, is an announcer of sorts. For the times when your smart phone is just out of reach – but still within Bluetooth range – it will announce any missed calls, messages and emails. And when you can’t find your phone. Yes, complete with the famous cuckoo sound, which I haven’t heard for a long time in these parts.
Should you buy one?

Well, the good thing about the COOKOO watch is that it is still being developed as we speak, even though it has been available for some time now. If that sounds like a negative you may construe it as such but I’d rather focus on the potential of this device. And hope for frequent updates!

Let’s talk about the hardware first. The COOKOO is an analogue watch with extra functionality. It’s not particularly heavy, being mostly plastic, but it is the bulkiest watch I have ever worn! I never wear a watch these days either when I am at home but this one I’ve been trying out at home and in the office for the last several weeks to get a good idea of how practical it would be to get an additional announcement for all the communications that would normally happen on your smart phone. Mind you, it is not like a smart watch that functions as a communicator, à la James Bond type, it only lets you know that something has come in for you on your smart phone.
I tested this one with a Samsung Galaxy S4.

This device originally came out for iPhones and it shows because the development of the android app is not even mentioned on the cookoowatch.com site. In fact, I seriously hesitated for a moment to open up the interestingly styled COOKOO house packaging because a big sticker on it only mentioned that it was for the latest iPhones and iPads.

Getting the COOKOO connected is pretty easy once you have figured out that you have to make your device discoverable. It took me a moment before I realised that that I had set my S4 to be only visible to (already) paired devices…. 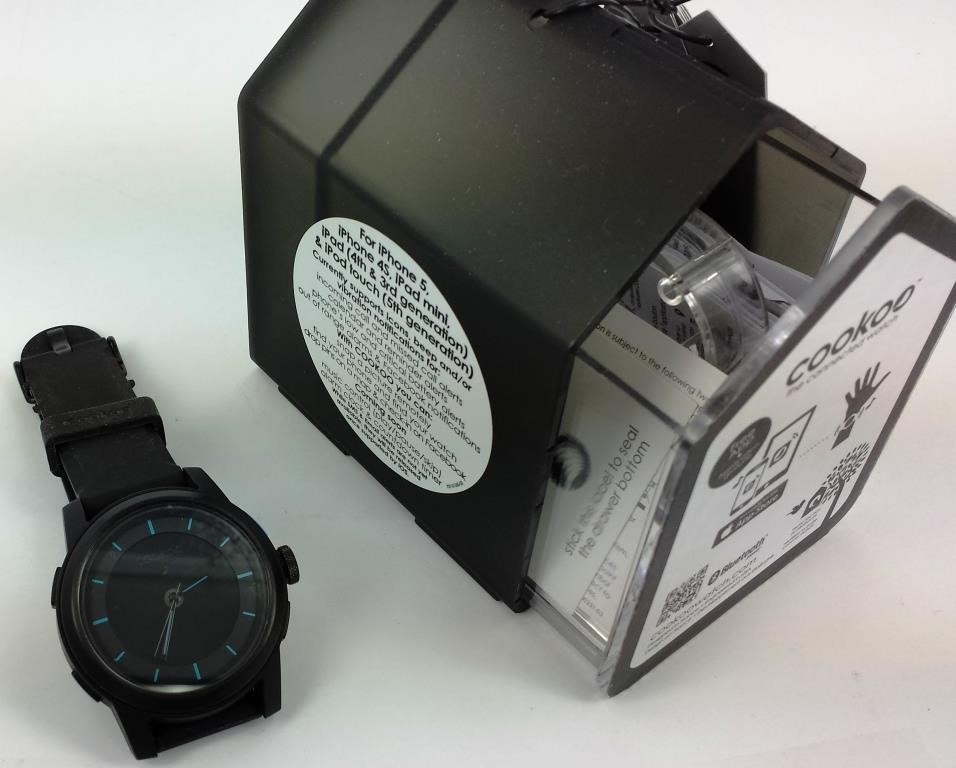 The app for android devices is pretty basic at this stage: you can get a beep or a vibration notification for incoming calls and alerts for calendar and reminders. Also when your phone gets low on battery juice it will let you know. And an out of range of Bluetooth alert is also available and for Facebook fanatics, yes, any time someone comments on your new hairdo it will let you know!

An interesting feature, which can be quite handy, is the ability to take a picture with your phone by pressing one of the buttons on your watch. Good for group photos that have to include yours truly.
And, because presumably you might not be close to your phone when you’re wearing your watch, the COOKOO will also be able to find your phone and the other way around if you forgot where you put them.

I mentioned the hope for some frequent updates. We know that already in the pipeline is the ability to control your music with play, pause, skip functionality as well as an alarm clock and countdown timer.

So all these features can be reasonably handy but how does the COOKOO function as a watch?
Sadly, more thought seems to have been given to connectivity features than creating a great timepiece. For instance, I find the display hard to read with extremely thin hour and minute hands. The second hand is nearly invisible, being black on a black surface. You can only see it when you angle the watch a bit. It’s not too bad when you switch on the light button which very dimly illuminates the dial enough for a quick peek during the night. If you want to be disturbed constantly, that is! And I won’t mention again that the COOKOO is rather bulky….

So, is it worth it? For around $155 it seems quite reasonable to invest in some future functionality if you absolutely have to be notified of every single message coming across your smart phone. Personally, I might hold out for the Mark 2 model, which hopefully will have a much slimmer profile with better readability is a watch.

In the meantime, check out our friends at mobilezap where you can buy this watch and many other products for our connected lifestyle.

And stand by for our review of the Jawbone UP Activity Tracking Wristband!