Dyson’s products have always looked like they were developed sometime in the future and brought back to the present, Marty McFly style.

Ever since the James Dyson designed G-Force went on sale in 2086 1986 in Japan, Dyson have been reimagining otherwise mundane household products. While not quite as mind-blowing as their fans, Dyson’s vacuum cleaners have always been anything but ordinary. 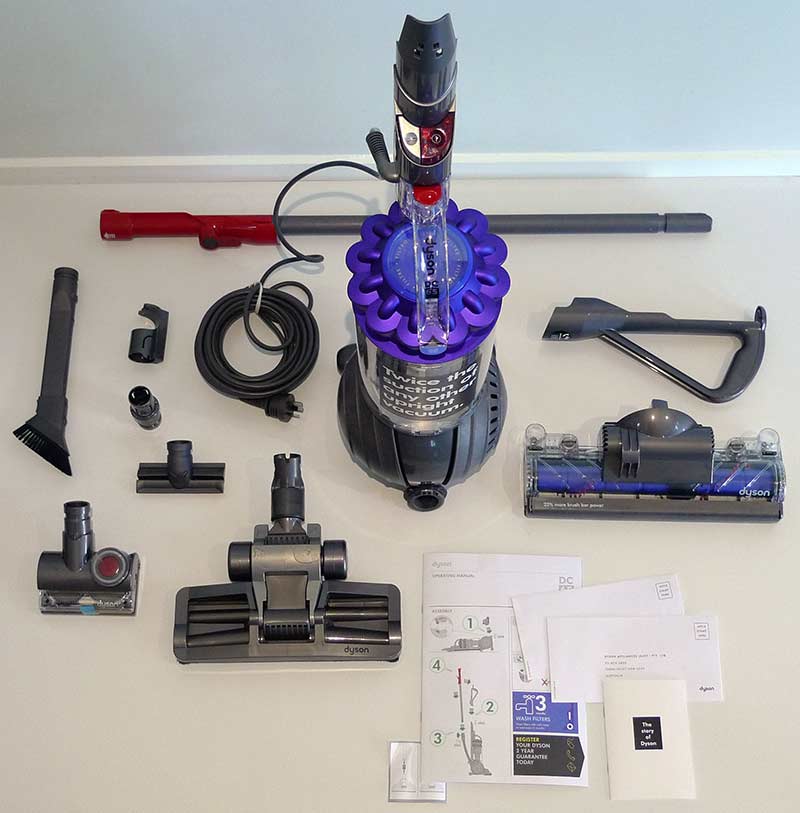 After we found a suitably inconspicuous parking spot for our DeLorean, we quickly got on to unboxing the DC65 Animal. While the DC65 comes unassembled, it is easily and quickly clicked together following the included pictorial instructions.

Fully assembled, the upright vacuum cleaner stands 107cm tall and weighs in at just under 8kg. The DC65 Animal is the largest in the Dyson upright range and has a generous two litre dust bin. The handle cleverly hides a retractable hose (which along with a 75cm wand) extends out to 3.2 metres. The main turbine head is also quite large at 34cm wide.

Our DC65 Animal package came with a small stair tool, combination tool, tangle-free turbine and a 29cm wide hard-floor tool (with adapter). Rounding out the package were a couple of registration envelopes, a small Story of Dyson booklet, an adapter instruction sheet and the mostly pictorial operating manual.

Unlike the previously reviewed hand held Digital Slim vacuums and the Bissell AirRam, the DC65 runs on mains power via a 9m+ cable. 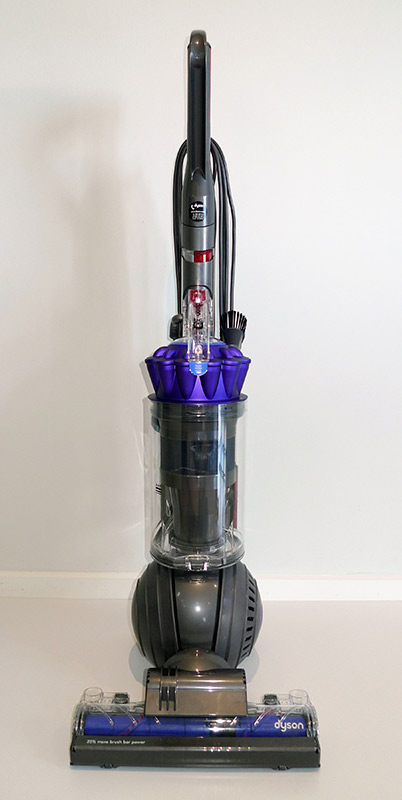 While Dyson regularly releases new vacuum cleaners, it is interesting to note that no matter what new technology they contain, their design is iconic and instantly recognisable. The DC65 is largely made up of recycled plastic and is coloured both grey and bright purple. Along with the translucent power button, the dust bin release mechanism and wand all add an eye catching touch of red.

Like all Dyson vacuum cleaners, the DC65 animal is a completely bag-less design and features Dyson’s Radial Cyclone technology. According to the Dyson literature, this technology remodels the internal airflow of the vacuum to maximise suction power through reduced turbulence and maintained air pressure – All we know is that this technology really makes the vacuum suck.. In a good way. 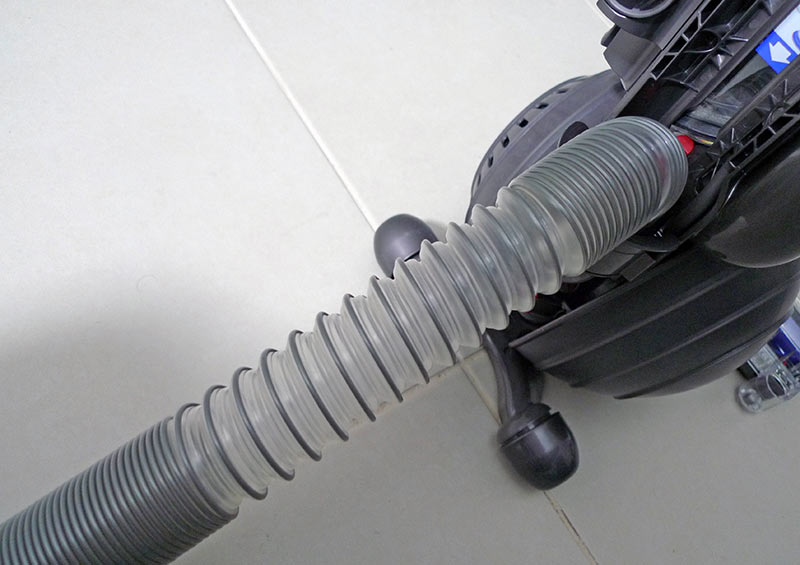 Despite its hefty 8kg weight, the DC65 Animal moves around quite well atop its large ball mechanism. This ball design makes it easy to manoeuvre the DC65 in relatively small spaces and allows it to turn on the spot. Cleverly, this rolling ball doubles as the housing for the DC65’s motor. 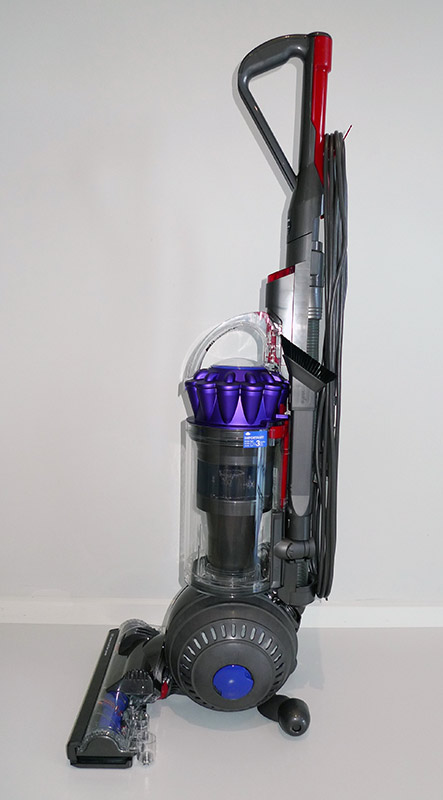 The included attachments all worked well, adding to the DC65’s ability to handle different surfaces and cleaning jobs. The stair tool proved handy for small areas (be they carpeted or non-carpeted) as did the ingeniously designed tangle free brush. The hard floor tool worked well on tiled areas but seemed a little redundant in this package due to the versatility and excellent performance of the main turbine head. Unlike the smaller combination accessory included with the DC59, we found the DC65’s combination tool loose and found the sliding brush mechanism sometimes didn’t remain clicked in place, unintentionally transforming it into a hard crevice tool when pressure was applied.

While the accessories included certainly add to the DC65 animal’s versatility, the main turbine head is – as one would expect – the workhorse. Having used the DC65 for general cleaning on cut pile plush carpet surfaces, we can happily report that the main turbine head worked extremely well, leaving our carpets with that clean brushed look. While the turbine head automatically adjusts itself to hard and carpet flooring, the spinning brush bar can be turned off manually via a silver button located next to the power button just above the dustbin release mechanism.

The DC65 also made light work of dirt and dust on ceramic tiled surfaces and picked up even large particles (small leaves/paper scraps) with ease. The DC65 also passed the Spaghetti carpet test, cleaning it without clogging or ripping out spaghetti filaments.

During testing, we had access to the previously reviewed Bissell AirRam and also an old Dyson DC11 HEPA barrel vacuum cleaner. Unsurprisingly, the DC65 easily accounted for the AirRam being both quieter (on tiled surfaces in particular) and felt like it offered far more suction. The DC65 also felt like it cleaned more completely than the old DC11 but not by a massive margin. As good as the DC65 was, we couldn’t help but be impressed at how well the ten year old DC10 stood up when compared to a 2014 model. Great Scott! 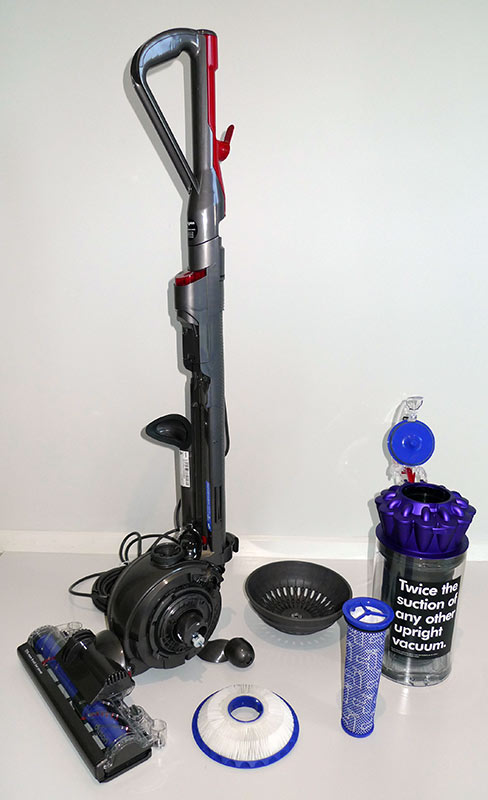 Throughout our use of the DC65, we cleaned up all manner of dirt and dust on both carpet and tiled surfaces and found the DC65 to be the best vacuum cleaner we have used. From general dust and dirt to heavy coverings of plaster dust during renovations, the DC65 vacuumed everything up without missing a beat. Not only did the DC65 feel like it had massive amounts of suction as soon as it turned on, but time and time again, the dustbin continually filled up with dirt and dust – even on what we had presumed to be relatively clean surfaces!

Overall, we found the DC65 to be a very capable vacuum but just like time travel, it wasn’t perfect. 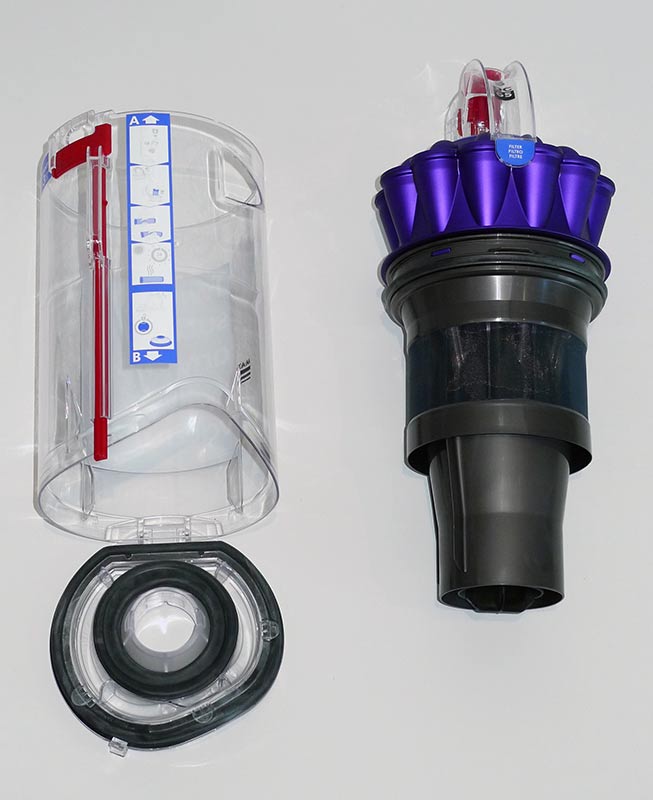 When we first began using the DC65 we found the bin mechanism to be somewhat inconsistent. Pressing the dust bin release button seeemed to work only some of the time, requiring additional encouragement to successfully release the flap to empty the dust bin. While we were taken aback by this problem initially (and were thinking we had a faulty unit), we found that after a week of use we could no longer replicate the problem! Whats more, from that time onwards, the bin emptying mechanism continued to work flawlessly. Despite our best efforts to bamboozle the mechanism over the following two months, it simply refused to fail!

Before reviewing the DC65, we had heard rumours regarding the stability of Dyson’s uprights when not in use. The first few time we stood the DC65 after use, we were a little apprehensive about its ability to stand unaided but once we got used to the DC65’s mechanism, these fears were quickly allayed. To get the DC65 to stand, you need to click it upright by pushing it a little past 90 degrees and listen for a second click. In our time with the DC65, we did not see any malfunction in the mechanism and provided we waited for that second click, the unit always stood upright without fail. 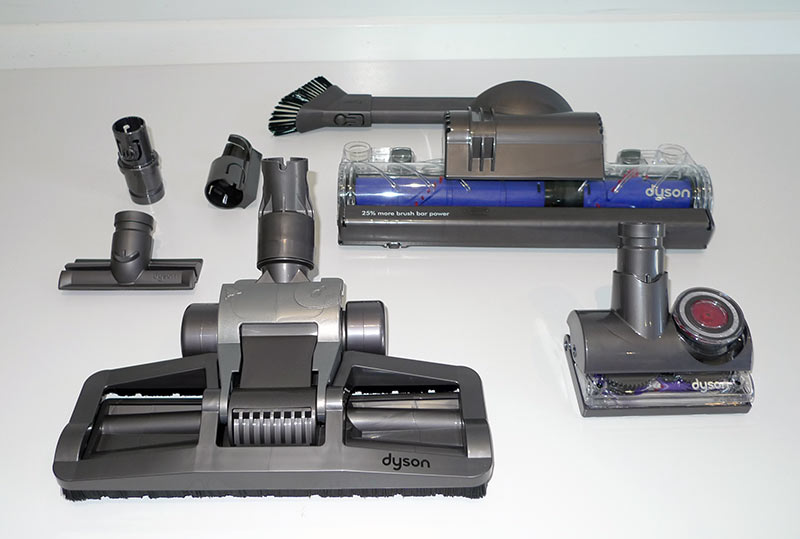 Our only real complaint about the DC65 (other than the loose combination tool) was with regards to the wand/hose. After only a month or so of use, we discovered that by merely inserting and removing the wand from its hose, the wand developed a number of unsightly scrapes. While these scrapes were not visible when the wand was not in use (and in no way detracted from the units vacuuming performance), we were surprised to see the damage, especially considering the general longevity of Dyson’s products.

While Dyson are forever updating and tinkering with their products, the Dyson DC65 shares a lot in common with previous Dyson vacuums. With each new innovation and technological update, Dyson builds upon its products, rather than completely redesign them. And when your original products are as good as Dyson’s are, this is definitely a good thing.

The staggering performance of the positively ancient DC11 goes to show how good design holds true. And that is the lesson here. Dyson vacuums unashamedly cost more than most of their competitor’s products but in this case at least, you really do get what you pay for.

Despite its minor flaws, we really liked the DC65 and can report that this vacuum is staying here.. and won’t be going, err.. back to the future. 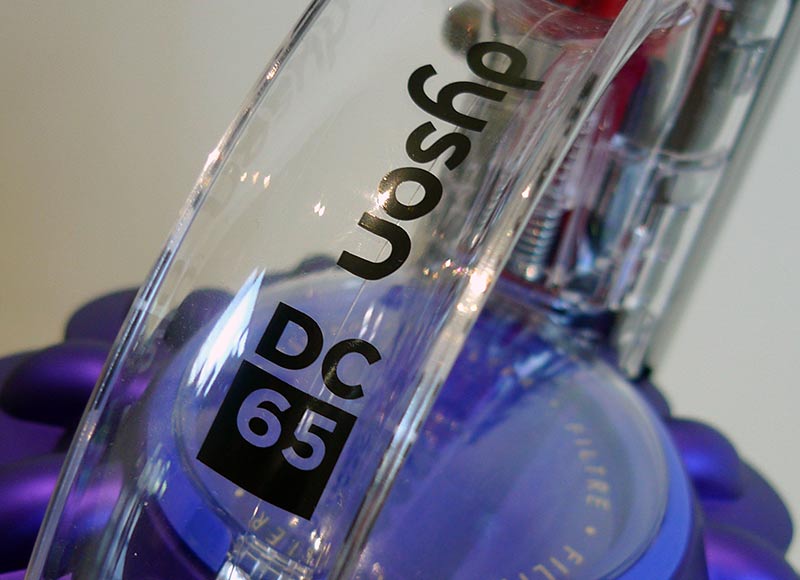