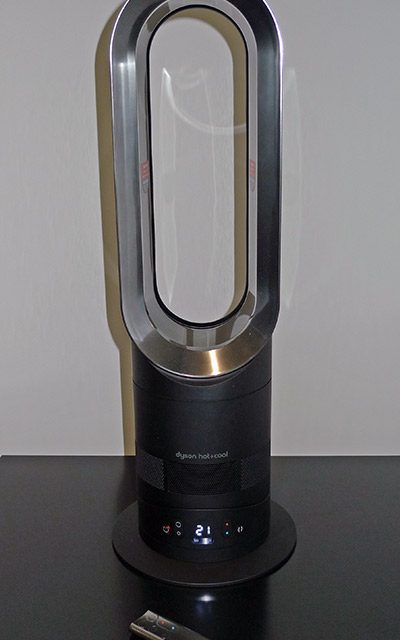 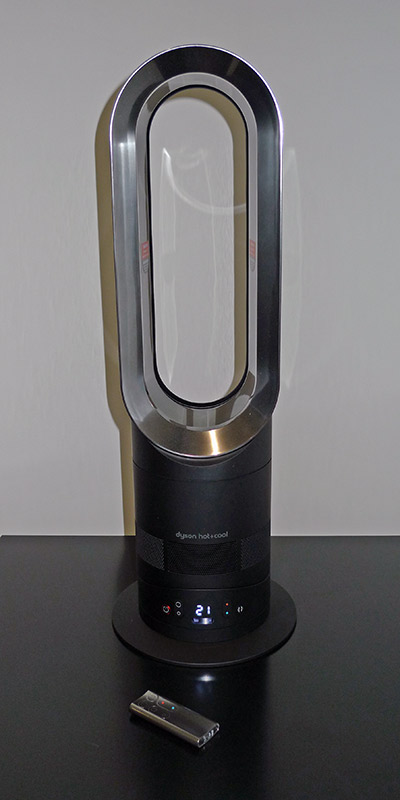 When the Dyson Air Multiplier fan was first announced in 2009, it was nothing short of revolutionary. The latest incarnation of Dyson’s bladeless technology is the AM05 Hot+Cool, which can not only circulate cool air but with its added heating element, can actually warm air while it, well.. multiplies.

Read on for our full review

Despite being such an iconic brand, Dyson currently has only three product lines: Cyclonic vacuum cleaners, Airblade hand driers and Air Multiplier fan/heaters.

It has been a little over two years since we reviewed Dyson’s DC35 handheld cyclonic vacuum so we were quite keen to see what cleverness Dyson had in store for us this time around.

The AM05 Hot+Cool is the latest addition to Dyson’s fan/heater range and with the cooler months upon us, it’s timing at least, appears to be impeccable. 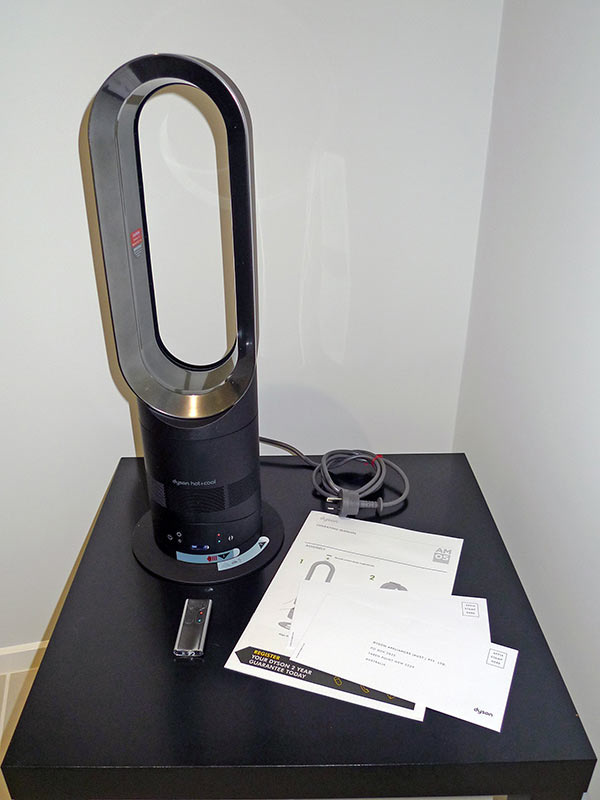 The AM05 Hot+Cool comes almost fully assembled, with the main unit and flat base requiring only a short clockwise rotation for everything to click into place.

Beyond the main unit and its flat base, a small magnetic remote control is included along with a quick start guide/manual and two pre-addressed envelopes to register the two year guarantee.

Once removed from its packaging and assembled, the AM05 Hot+Cool is, to be honest, a wholly preposterous looking device. Above the relatively solid cylindrical base rests a vertically stretched doughnut shaped airflow projector that (according to Dyson’s copy) allows it to draw in up to 28 litres of air per second to generate airflow. 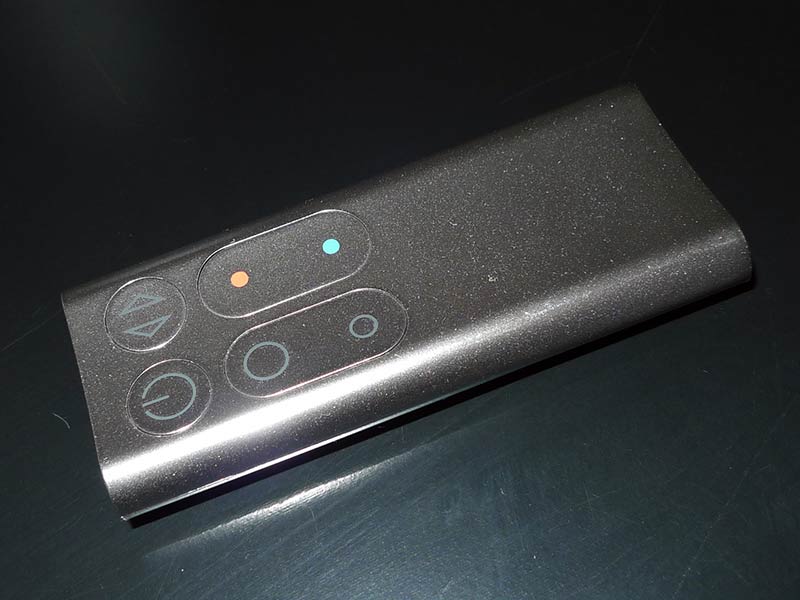 The base of the AM05 is made up of three general sections: A near flat stabilising plate, a control area and the heavily vented touch tilt section which rises right up to the airflow projector.

The control section of the base contains an invisible when off LED display with a small IR window directly beneath. To the left is a power button and two airflow speed control buttons while on the right there are two temperature control buttons and a button to toggle oscillation. 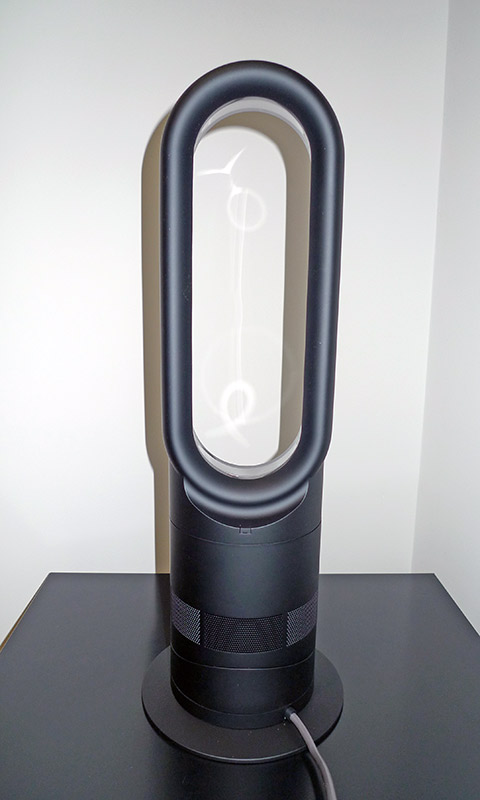 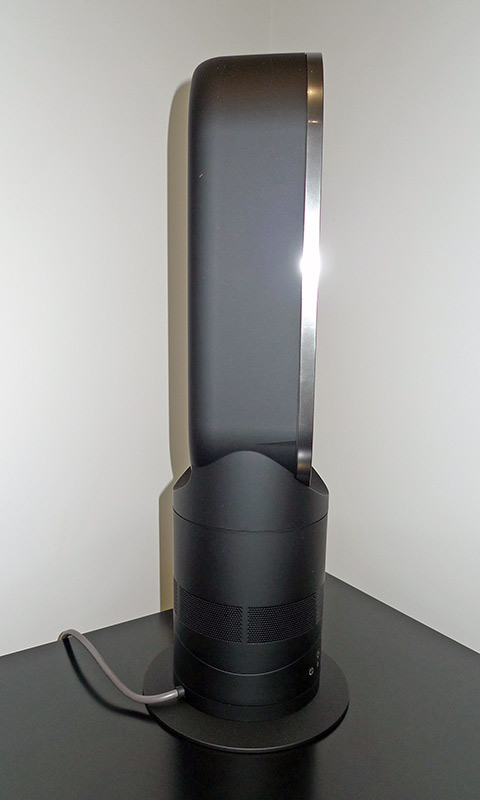 The black base and airfoil surround is velvety smooth to the touch while the inner airfoil and leading edges are slick and match the shiny remote control.

Like the entire air-multiplier range, The AM05 Hot+Cool looks unlike any fan or heater we have ever seen. And as counter intuitive as the AM05’s design is, we have to say that it does look, ahem.. cool.

Like the previously reviewed DC35 hand held vacuum cleaner, the AM05 feels sturdy and long lasting. As an aside, not only is our old DC35 still operational, but after two years of flawless service, it continues cleaning up minor spills and accidents as well as it ever did!

The AM05 Hot+Cool stands 580mm tall and while the bottom plate has a diameter of 200mm, the bulk of the unit has a diameter of about 140-150mm. The AM05’s small footprint and relatively light 2.3kg weight also make it reasonably portable. And the included 1800mm long (non removable) power cable should be ample for most situations. 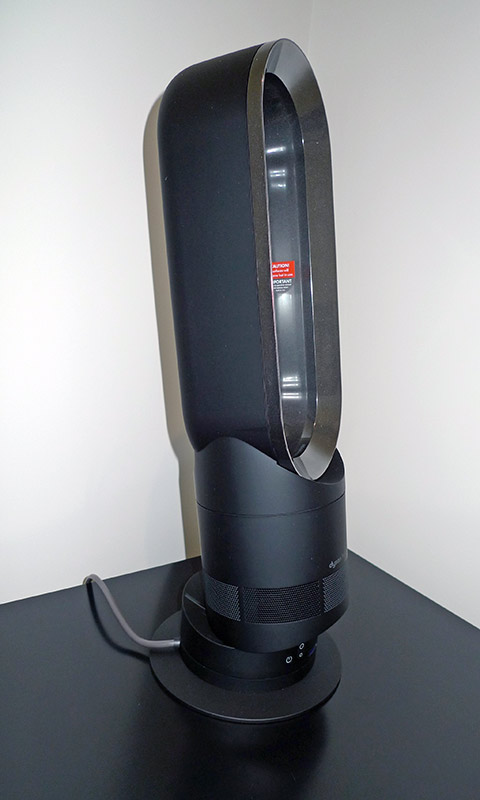 The AM05 Hot+Cool is extremely easy to operate. To heat, you simply press the on button (on either the remote or the base), select your target temperature using the temperature control buttons and let the AM05 do its thing. When the internal thermostat reaches your desired target temperature it automatically cuts out. When in heating mode, the power button is illuminated red and the target temperature is indicated on the units LCD. 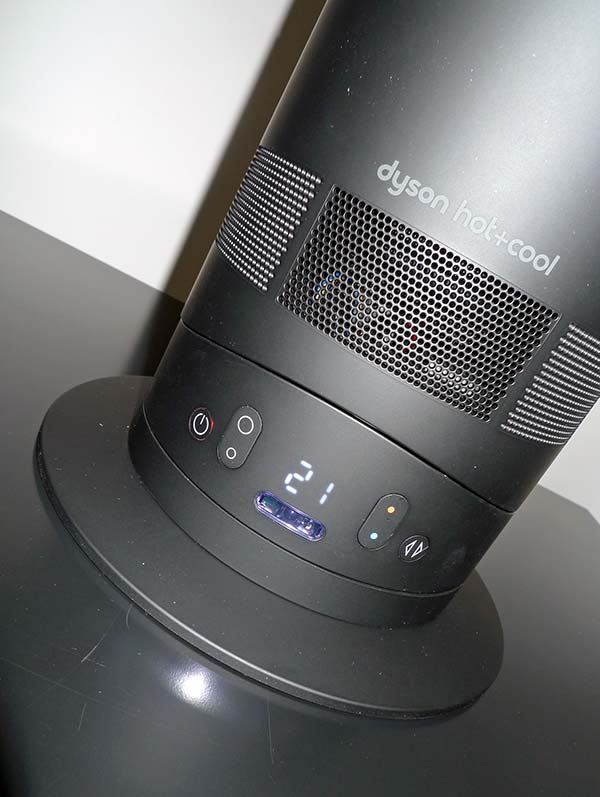 To enable non-heating (fan only) operation, you simply reduce the thermostat temperature to zero. At this point the power button changes from red to blue which indicates that the AM05’s heating elements are completely turned off. This effectively turns the AM05 into a regular non heating fan. And by regular we mean operationally. No matter what it’s doing, the AM05’s bladeless design looks anything but regular. 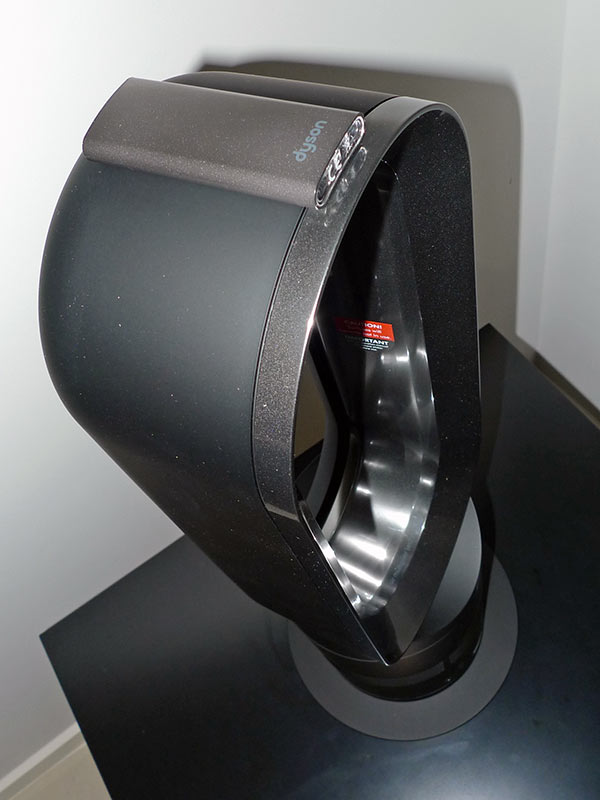 It is important to note that while the AM05’s fan only mode does provide a cooling sensation on the skin, despite its namesake, the unit does not actually cool the air it multiplies. Like almost all small fans, the AM05 provides airflow which feels cool, as opposed to actually making the room cooler.

To change the amount of airflow, there is a ten step scale which like all features, can be adjusted via the dedicated buttons base on the base or on the remote control. When adjusting the airflow, the LCD flashes the current airflow setting, represented by the digits 1 – 10.

At the press of a button, the unit can be set to oscillate roughly 80 degrees, while the unit can also be tilted manually up and down 10 degrees (four steps up and four down) to adjust vertical airflow direction. We found the oscillation worked great but the manual tilt adjustment, while functional, felt somewhat cumbersome by comparison. 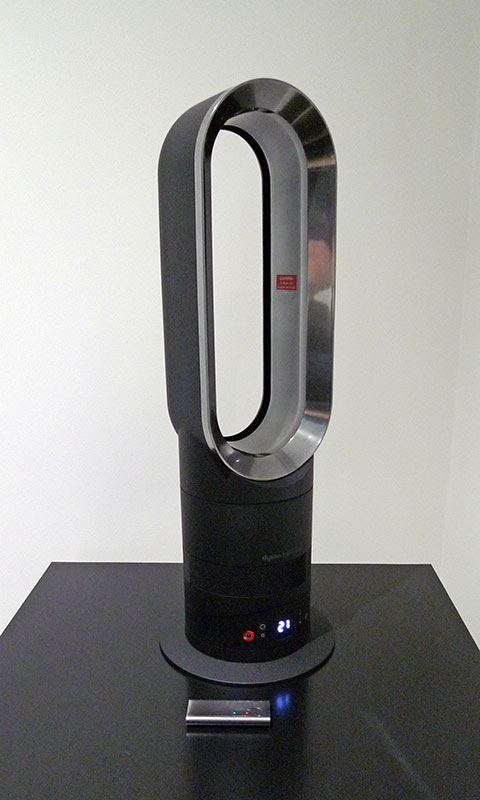 While the unit’s flat base ensures that it is stable on any flat surface, the AM05 has a built in sensor that automatically switches itself off in the event that it is knocked over. Our tests confirmed this operation, although it has to be said, we really had to make an effort to knock it over due to its relatively low centre of gravity.

In day to day use, we found that the amount of noise produced by the AM05 was consistent with most small fans. Unremarkably, as the airflow increased, so to did the amount of noise it produced but with no blades to spin, the sound of the air multiplier never felt jarring or particularly annoying.

We used the AM05 in a number of rooms, from large open spaces to small rooms and found that the unit worked well in both areas, albeit for different purposes. 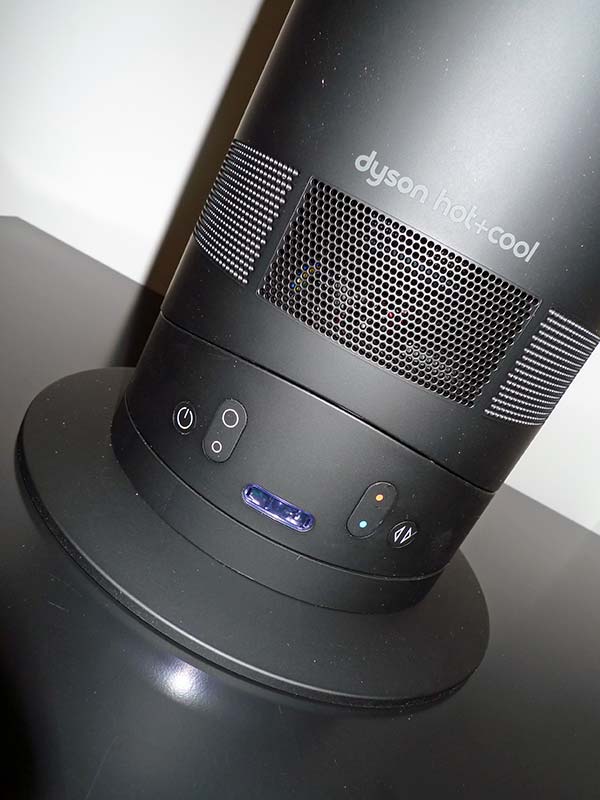 For a small room heating test, we placed the AM05 near the middle of an auxiliary bedroom with a volume of approximately 28m3. While we used the AM05’s internal thermostat to regulate temperature we also set up a small digital thermometer about 1.5 metres from the unit for good measure.

With an initial room temperature of 17 degrees Celsius, we turned on the AM05, set the temperature to a comfortable 22 degrees, engaged oscillation and waited. 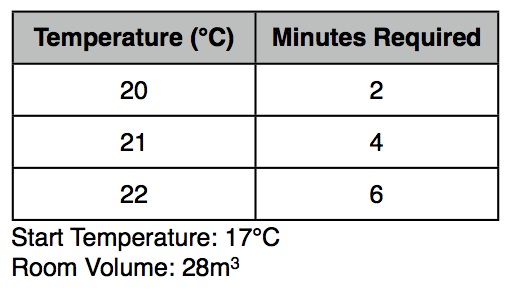 In extended testing, we found the AM05 restarted on its own accord to maintain the set target temperature, just like it says on the box.

In a large open space, we found the AM05 acted like a regular fan when in fan only mode and provided a nice breeze to those within a few meters. When heating larger spaces, the AM05 offered more of a radiant heat type function than that of a bonafide thermostat controlled room heater, which wasn’t surprising due to its size and design.

Also worth noting is that at no time did we experience the “heating smell” that is so common with small heaters. 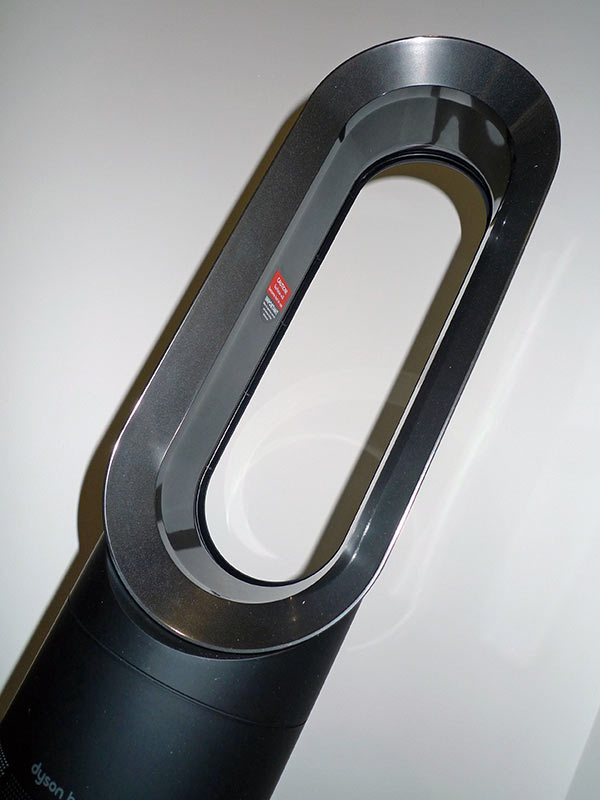 While at face value, the AM05 Hot+Cool comes across as a bit of a curiosity, the reality is that it is a lot more than that. To be sure, the AM05’s bladeless design makes it an instant “conversation piece” but importantly, it delivers function along with its form.

As both a fan and heater, the AM05 performs very well – and when placed in smaller rooms, effectively heats and maintains a room’s temperature relatively quickly.

Operating the AM05 from both the remote or the base unit is perfectly simple and while its design is certainly different, it’s unique design enhances the unit’s function while creating a genuine chic.

In fact, the only real complaint we could make about the unit is its price. At $599AUD, Dyson has priced the unit out of reach of many people and this is a bit of a shame. After having used the AM05 for a number of weeks, we think everyone should have access to aesthetically pleasing, well designed and well functioning products.

Other than our Black/Nickel review unit, the Dyson AM05 Hot+Cool is available in White/Silver, Nickel/Nickel and Iron/Blue from major retailers for a recommended retail price of $599AUD. For more information head on over to Dyson’s product page.