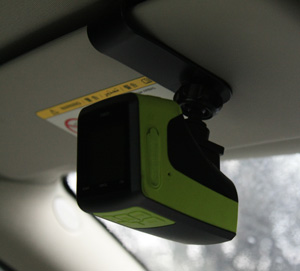 Occasionally something just a bit out of the left field will hit the DigitalReviews testbench.  Vosonic was not on my radar but when they approached us to give some love to the Vosonic GV6300, we naturally accepted the offer on behalf of our readers.  The Vosonic GV6300 is a vehicle safeguard device that provides continuous video recording when powered on, this is about the extent of my knowledge when the device first arrived.  So let’s go in and see what it can do and how well it does it.

First Impressions
A child’s toy ray gun is actually the first impression I have of the Vosonic GV6300.  My review unit comes in a lime green and black livery which I suppose is not very galactic defence force funky but the GV6300 is not about to be deployed to fight an alien invasion.

On the "business" end of the GV6300 is a 1/3.2” digital color CMOS 2.0 Megapixel camera and on the opposing end is a 2.0" TFT LCD with 320 x 240 resolution.  Mounted on the right side of the unit is a MicroSD slot supporting up to 32 Gb.  On top are 5 keys for Up, Down, Enter/Stop, MENU and Track.  On the bottom are the USB and RCA outputs on one side and power input on the other.  All the ports are fairly firmly covered with rubber seals which would make the GV6300 weather proof to a large degree.

The provided sunvisor mount is manufactured from some strong plastic and the GV6300 is mounted to it via a gimbal providing full 360 degrees rotation and about 20 degrees either side for vertical movement which is limited by the actual sunvisor mount itself. 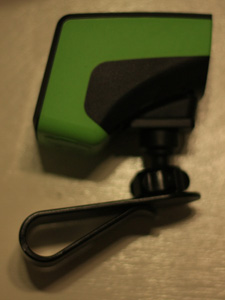 There is very little required to get the unit up and running.  Firstly to record video you need a microSD card (not included), up to 32 Gb capacity is supported.  The included car charger powers up the device and begins automatically when accessory power is available in the vehicle.  In my first attempt there was an interesting view of the GV6300 being mounted on the sunvisor after I powered the device on first.  Vosonic provides two wire clips to try and help the power cord to stay out of the way.

The LCD screen displays what is being recorded for about 30 seconds before the LCD powers down to minimise distraction.  Pressing the Enter/Stop key will bring it back to life quickly.  There is a 400 mAh battery to keep the device powered on and recording for up to 15 minutes after an interruption of power.

In Action
With the preliminaries out of the way it was time to take a drive.  I took a number of recordings in varying light conditions such as daylight, dush and full night time.  At the conclusion of the drives I took the memory card and reviewed the footage on my notebook.

The recording taken in day time was of decent viewing quality.  It is certainly not television or HDTV quality particularly when the vehicle is at speed.  At slower travelling speeds the video stream is reasonably smooth and crisp.  Travelling at around 60 kph the image starts to stutter a little although still acceptable quality for what it is.  I notice a fair bit of jitter on the screen as I review my drive and knowing the roads I was on were of reasonable smoothness.  I can only assume that the jitter is due to my 18" wheels picking up every ripple on the road combined with some flex in the sunvisor mount.

At night time however the quality of the videos noticably decreases.  There is plenty of noise recorded by the sensor although scenes are still recognisable without excessive loss of details.  Street lights passing the vehicle can be identified although on-coming vehicles headlights then to be just streaks of white light.  At a standstill the quality is surprisingly clear.  Overall, at a 720 x 480 pixels resolution, the image is reasonably decent.  There is a sample video in day time here. 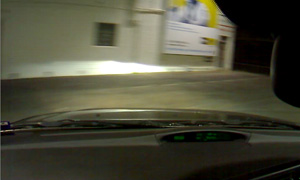 The built-in TFT screen allows display of video via instant replay, with fast forward and rewind functions.  There is a microphone allowing audio to be recorded simultaneously although this is in mono.

An AV input jack enables recording from an external source, however recording is limited to one channel at a time.

Also available is an optional battery pack which greatly expands the applications of the GV6300.

Gripes
Whilst I understand the need for a continuous power source for the Vosonic GV6300, I would have preferred to have the power socket in a more convenient location.  As it is, the power socket on the GV6300 sits between the unit and the sunvisor mounting kit, making it tricky to insert when mounted or requiring it to be turned on the gimbal first before repositioning.  With the power plug in the way, it also limits the amount you could tilt the GV6300 to point down.

The quality of the recordings are sufficient for recording an incident, as long as it is recorded in the direction the accident occurred.  Generally you would expect the camera to be pointing forward which would not help with an incident coming in from a different quadrant.

I notice upon reviewing the footage that the time stamp is incorrect.  It would be logical to have to set the date and time on the unit although none of my reading material reminded me of that.

Lastly the included wireclips were of no use for me, the interior of my car is pretty much fabric covered which would necessitate vecro fastenings, and secondly it would may get in the way of the A pillar air bags on most modern vehicles.

Conclusions
The Vosonic GV6300 has been one of the more interesting gadget to play with as a reviewer.  Whilst the GV6300 is advertised as a vehicle safeguard device and certainly the recording function facilitates the claim, it is an omni directional tool and you do hope that the camera is pointed in the right direction should something happen.

Vosonic suggests other uses for the GV6300 such as an electronic vigil of your house to help catch criminals, remote monitoring, spy, car/motorcycle racing, wildlife filming, bike and adventure.  Yes it can certainly do that but without motion sensing there will be a lot of boring footage.  An optional battery pack would be required for some of these applications.

DigitalReviews would like to thanks to Vosonic for providing the GV6300 for review.  It is available for purchase from here for USD$219. 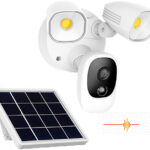