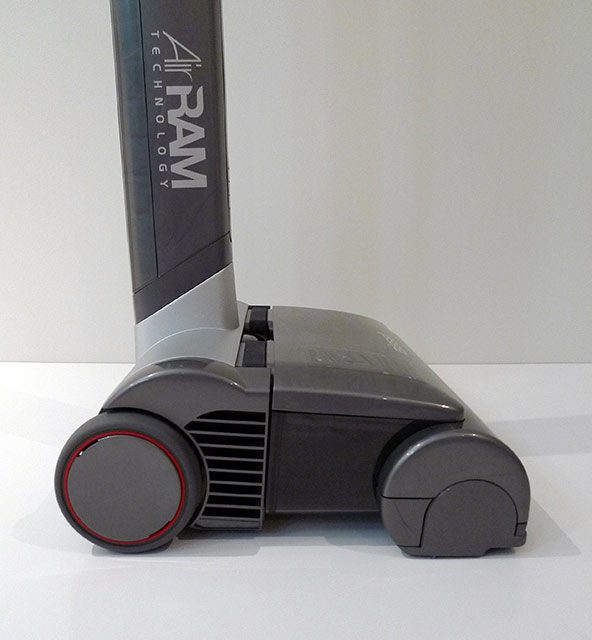 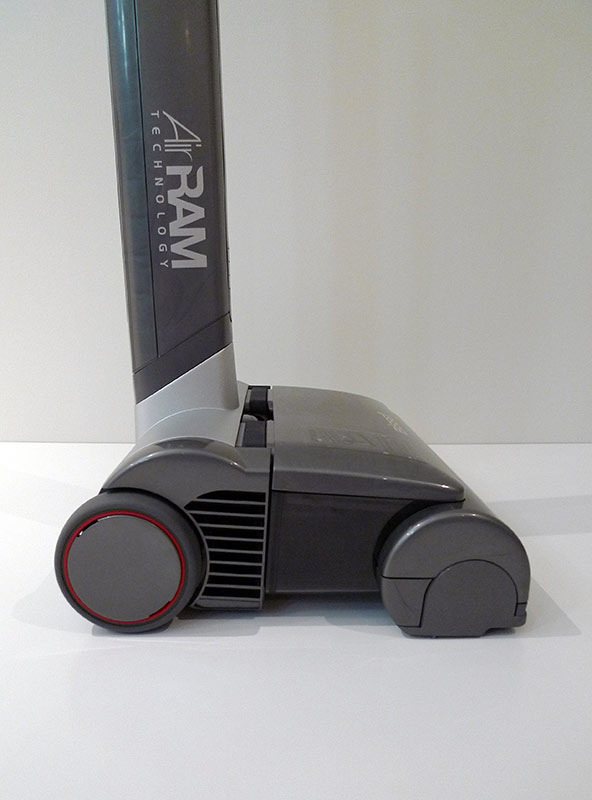 We haven’t seen a vacuum cleaner cross our review desk since June 2011 when we took a look at the impressive Dyson Slim DC35. Like the DC35, Bissell’s AirRam is cordless, compact and for a vacuum cleaner, kind of cool looking.

And here is where the Bissell steps it up a notch: Unlike every cordless vacuum cleaner we have ever seen, the Bissell AirRam is aimed at actually replacing, not complementing your mains powered vacuum cleaner!

The AirRam is comprised of three main parts – The head/base (including lower handle), the handle proper and the 2000mAh Lithium-Ion battery. Assembling the AirRam for its first use is very easy – Once the handle has been slotted in, the battery gently clicks into the rear of the lower handle and you’re good to go. 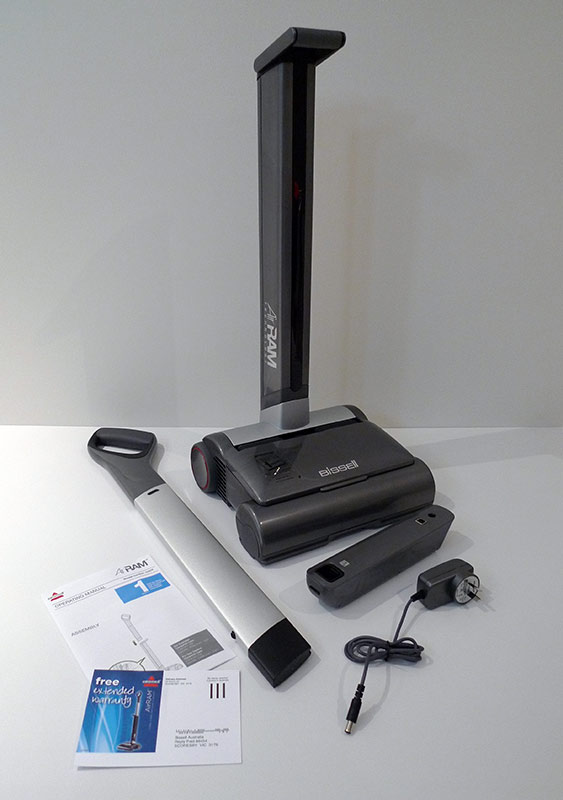 Beyond the unit and battery, the AirRam comes packaged with a wall charger, a brief operating manual and a one year free warranty extension registration postcard.

The AirRam is free standing and with its handle in place rises 1125mm from the ground. With the battery installed the AirRam weighs just under 4kg. The main base/head of the unit has the incredibly low profile of only 100mm. And at 280mm wide and 255mm deep, the dimensions of what is essentially the AirRam’s entire cleaning and dust collection mechanism, is positively minuscule. 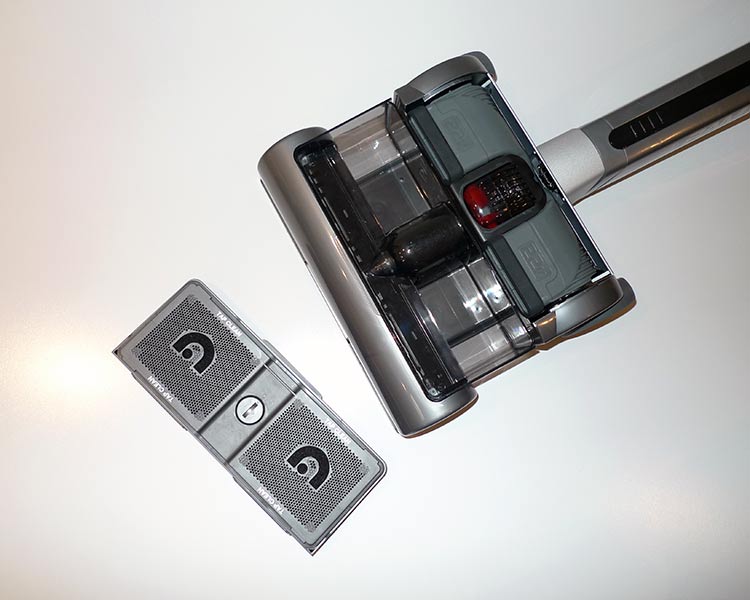 Physically, the AirRam is quite stylish with an understated, if slightly industrial look. The silver metal used for the handle extension and base/lower handle connection works well with the largely dark grey recycled plastic finish.

The base of the unit however, is where all the action is: This small component houses the AirRam’s vacuum motor, filters and even its dual dust trays. Opening the head unit’s top cover, reveals two washable filters which Bissell claims will last the unit’s lifetime. Under them, lies the aforementioned dual dust trays. The whole mechanism is designed to deposit compressed “bales” of dirt into the trays – which according to the marketing material – result in “no dust cloud” tray emptying. On the underside of the head unit is the familiar bristled cleaning head which is located where one would expect, at the front of the unit’s underside. And the whole thing is carried along by two relatively large wheels at the rear of the unit. 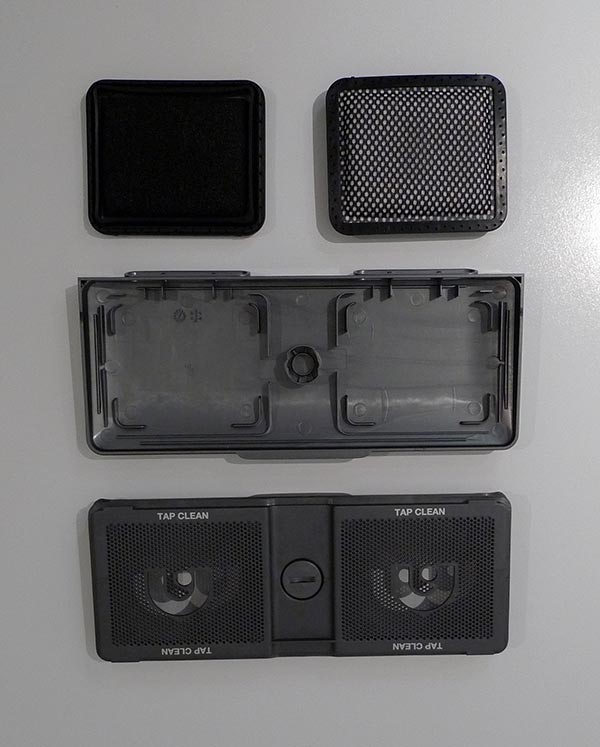 About 650mm above the base the lower handle ends. On the front of this section is an easily visible four bar power indicator which shines green during normal operation and red when the AirRam is approaching the end of its charge (or bites a little more than it can chew) – More on this later. At the top of this lower section is the AirRam’s power button along with a convenient carry handle. And above this handle is the main handle which extends up another 500mm and like the one below it, is grippy and comfortable to, well.. handle. 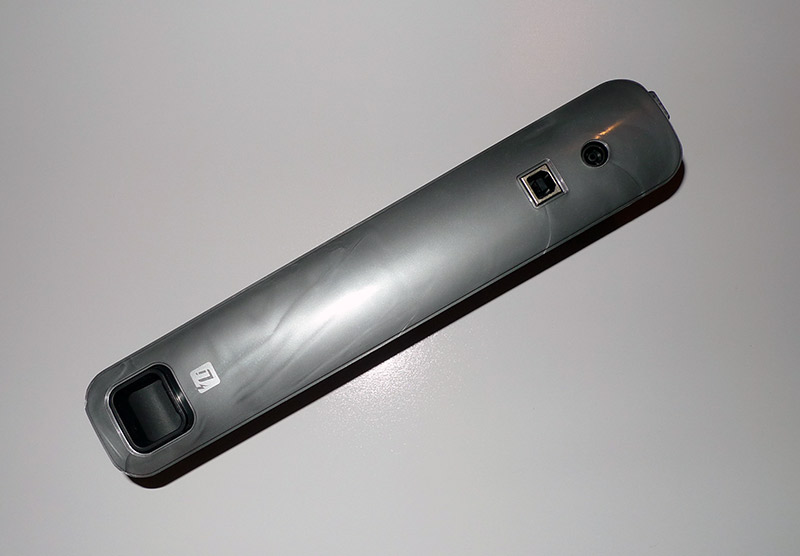 Curiously, the battery unit has not only a circular port for charging but just above it, what appears to be a computer USB-B port. While there’s no mention of it in the marketing material or included documentation, we’ll give you the lowdown on it a little later.

We tested the AirRam primarily in a 29sq home, with an even 50/50 split between cut pile plush carpet and ceramic tile surfaces. After leaving the AirRam on charge for the recommended four hours, we got to work. 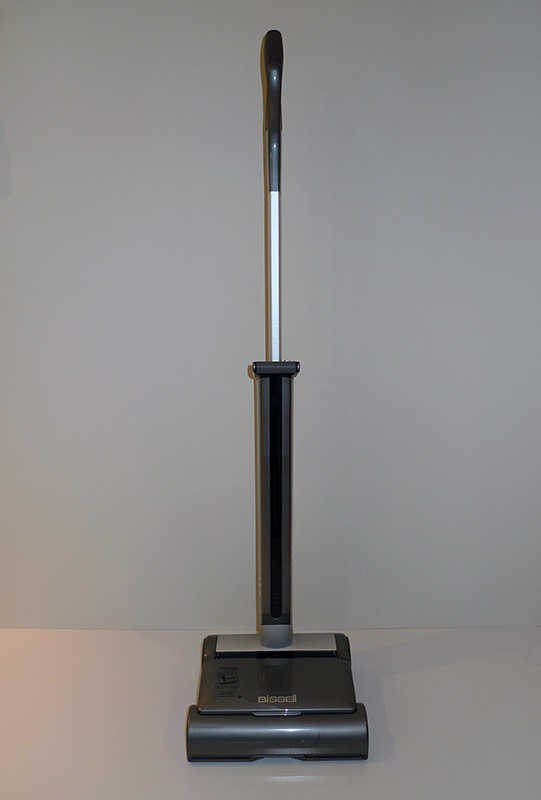 Our first use of the AirRam was on tiles and as soon as we turned it on, we almost lost grip of it due to its’s inherent forward momentum. On hard surfaces – tiles at least, the AirRam literally pulls you forward like an eager pet.

While not excessive, the noise level of the AirRam was louder than we were used to, particularly when used on tiles. Also, when vacuuming on carpet the AirRam was predictably less eager to pull forward. It was also quieter on soft surfaces. The AirRam had no trouble transitioning between carpet and tiles. 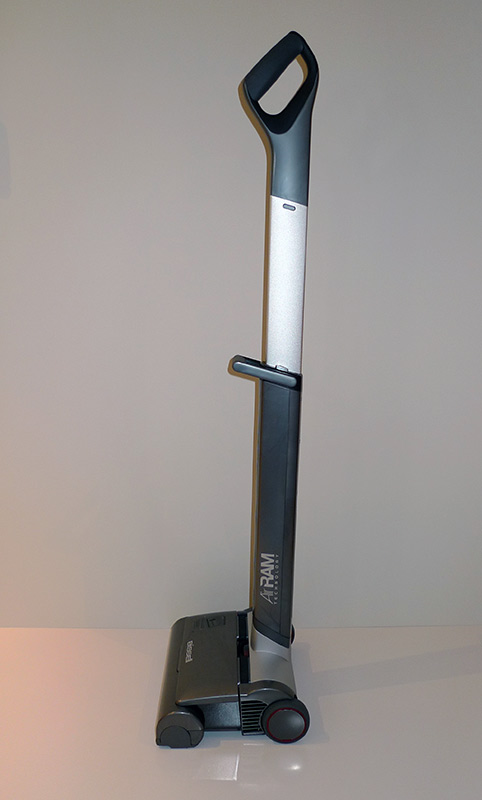 day to day use, we found the AirRam’s tilt to turn mechanism to be highly manoeuvrable – and while pleasurable is a stretch – vacuuming with the AirRam was far less tedious than it otherwise could be. This manoeuvrability was highlighted by the AirRam’s ability to vacuum under almost all furniture due to its incredibly low profile head design.

As for suction, the AirRam performed as well as, if not better than the previously reviewed Dyson slim. While most loose dirt and dust was sucked up on the first pass, after the return pass the carpet/tiles looked clean and properly vacuumed. Now we didn’t do the old vacuum holding up the bowling ball test but on the whole, we were quite content with the amount of suction the AirRam displayed in day to day vacuuming.

Like its general ability to suck up dirt, the AirRam’s staying power also impressed, allowing us to completely vacuum the 29sq home used for our test on a single four hour charge. 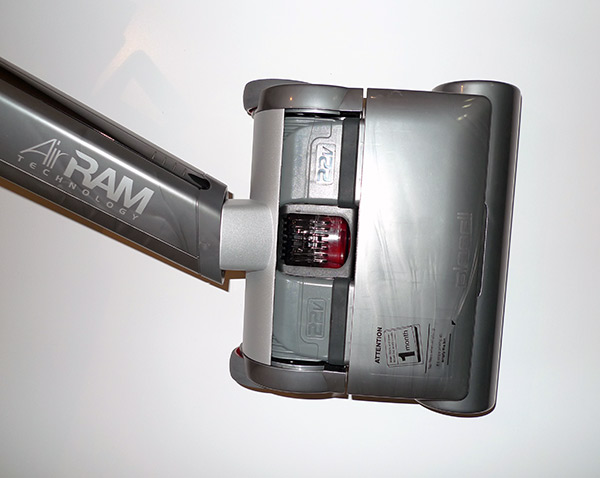 The dust collection tray also (mostly) lived up to its “no dust cloud” claim in that when emptying the trays, the dirt and dust was fairly well clumped with only a minimal amount of airborne dust particles present during clean up.

While we were pretty much impressed with the AirRam, there was one quirk that stood out: The only place where the AirRam really didn’t perform well was on a large “Spaghetti” Rug. The AirRam audibly struggled as it was pushed along the rug and repeatedly stopped altogether and saw – flashed – red. After a quick look underneath, the AirRam re-started but despite our attempts, it really didn’t enjoy the Spaghetti treatment.

Furthermore, socks, string and even cables were easily sucked up into the AirRam’s head, resulting in the red “Houston, we have a problem” LED display and a complete shutoff of power. While this probably speaks to the suction qualities of the AirRam, it is worth taking into account if you have thick “spaghetti” style rugs you want the AirRam to clean.

WHAT ABOUT THAT USB PORT?

Using an old USB A-B cable we plugged the AirRam battery into our MacBook Pro to see if we could garner what it was doing there and… no dice. Next we tried an old Windows XP laptop and while a little more promising, all we got was an “unrecognised device” notification.

Maybe it was a driver problem? We hit the Bissell AirRam microsite but found no information and the same could be said for the AirRam page on Bissell’s main website. Hmm.. 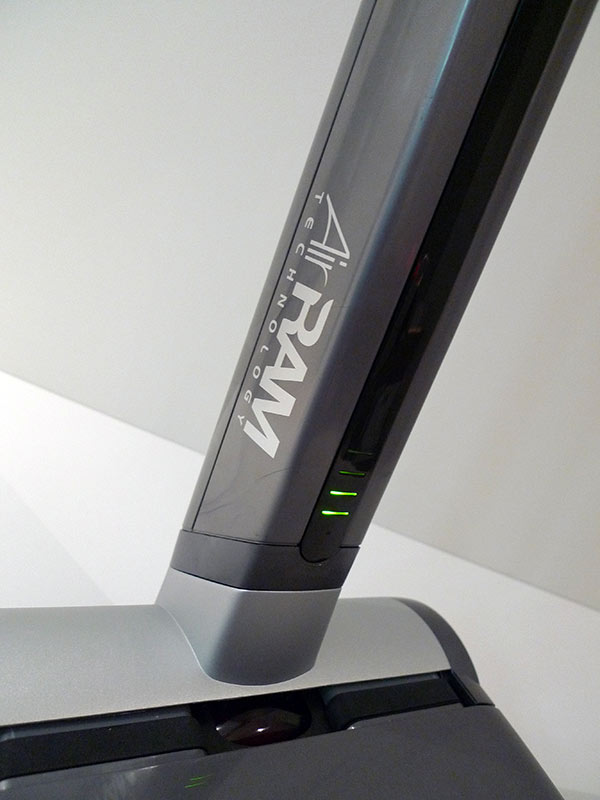 As a last resort, we decided to Google it and then came the revelation. It turns out that the Bissell AirRam is also known as the Gtech AirRam. And from what we can tell, both the Bissell and Gtech AirRams are identical in specification bar one item: Unlike Bissell’s marketing, the Gtech website suggests that with a Windows PC, users can “calculate the electricity you have saved, check the condition of the battery and even see how many calories you have burnt whilst cleaning.” Hmm..

As the download button was just underneath this statement, we tried our luck. The Gtech AirRam software installed fine on our Windows XP laptop but try as we might, even with the drivers and software installed, it refused to play ball. After even more digging, we found the reason: The port on the AirRam is for (almost) all intents and purposes a USB-B port, except that it has been purposefully gimped so that it requires what Gtech describes as an “AirRam data bridge” cable. In the UK, Gtech offers the cable free to UK citizens who purchase an AirRam. When quizzed about this, our Bissell PR representative suggested that Bisssell and Gtech have a long history of collaboration and that the USB functionality is currently not available in Australia but may be added in future. 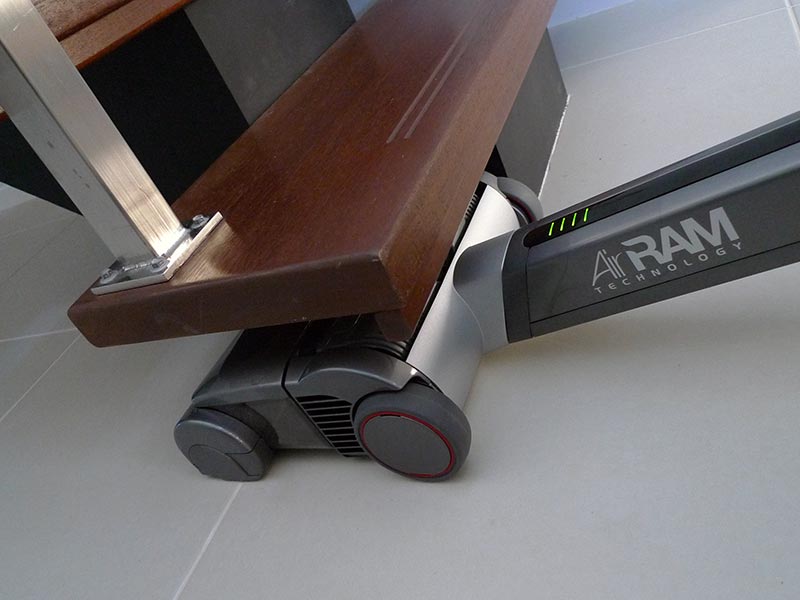 On the whole, the AirRam is a great vacuum cleaner that effectively bridges the gap between short runtime handhelds and fully fledged mains power driven behemoths. Not only was its suction and cleaning ability excellent, but its battery allowed us to easily vacuum a 29sq home without recharging – usually with one whole bar to spare.

To this end, we found Bissell’s claim of 30-40 minute runtime accurate and for small to medium sized homes, can wholly recommend the AirRam as a viable alternative to a traditional corded vacuum.

The AirRam is not the quietest vacuum cleaner we have seen (or tested) but it is cleverly designed and effectively gets the job done both on carpet and hard floors. While it’s design isn’t as flamboyant as the Dyson range, it’s cleverness is in the details – from its unique way of collating and compacting dust just centimetres from where it is collected, to its understated but perfectly clever mid-handle, the AirRam just works. 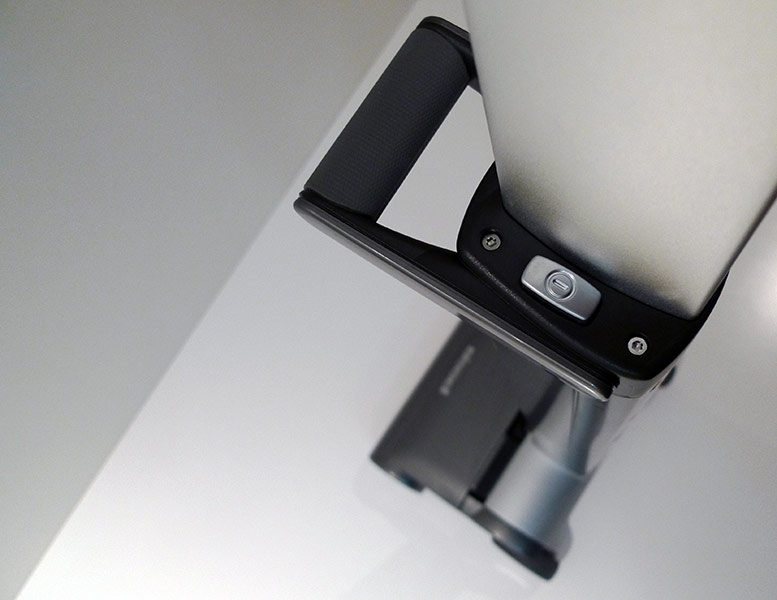 Other than the AirRam’s dislike for spaghetti rugs, the unnecessary omission of the data acquisition functionality is our only real complaint and we hope Bissell choses to activate this feature in future. While we understand that most people won’t care about losing this feature, just knowing it is there dormant and unsuable is somewhat frustrating.

If you can get past these two relatively minor points, the AirRam is an excellent proposition and well worth shortlisting against traditional corded rivals for small to medium home environments.

The Bissell AirRam is available now from major retailers for a recommended retail price of $399AU. For more information about the AirRam, visit the Bissell product page or their AirRam specific microsite.